Technology Other News 11 Jan 2017 My laptop took a bul ...
Technology, In Other News

My laptop took a bullet for me: Apple MacBook Pro user

A mass shooting occurred at Fort Lauderdale-Hollywood International Airport in Broward County, Florida on January 6, 2017 near the baggage claim in Terminal 2. Five people were killed, while six others were left injured. A total of 36 people sustained injuries in the ensuing panic, as reported by CNN. The suspect – identified as Alaska native Esteban Santiago-Ruiz, was taken into custody after surrendering to police officers.

In the midst of chaos, a witness to the shooting at the airport named Steve Frappier revealed in an interview with CNN that his Apple MacBook Pro which was stored in his backpack took a stray bullet during the harrowing scene thereby saving his life. 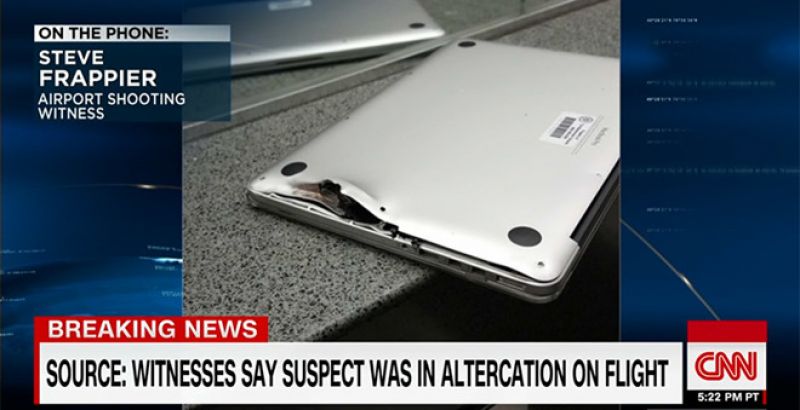 Frappier added that he was shot in the back while taking cover on the ground when the shooting took place. Luckily, his MacBook Pro that was stored in his backpack seemed to have prevented the bullet from piercing through his body.

As per an image shared by the news agency, the bullet from Santiago’s gun travelled through an opening in the backpack and hit the laptop’s display and continued to destroy the aluminium unibody chassis, battery and other circuitry before exiting near the side intake vents of the laptop.

Suspect Santiago has apparently been enlisted in the Army National Guard in Puerto Rico in 2007. There are several reports that claim that he served in Iraq for ten months in 2010 and was later transferred to the National Guard in Alaska in 2014, where he was stationed as a combat engineer.

Federal charges were filed against Santiago the day after the shooting.