With smartphones, tablets, smart TVs and security cameras generating immense amounts of data each day in each home, having a NAS at home is advisable.
Rating:

While a network storage device (NAS) is not easily found in homes, here’s one that can probably change that game. With the amount of data each person generates, it is not easy to keep storing personal files on external storage drives or on the cloud. While cloud storage is pretty expensive and could be hacked, external storage drives are equally vulnerable to virus attacks and failures. Having something robust is the need of the hour and the best alternative is to have network storage in your home itself. A NAS is now cheaper than before, more secure and you can create your own personal cloud or server right from the luxury and security of your own house. 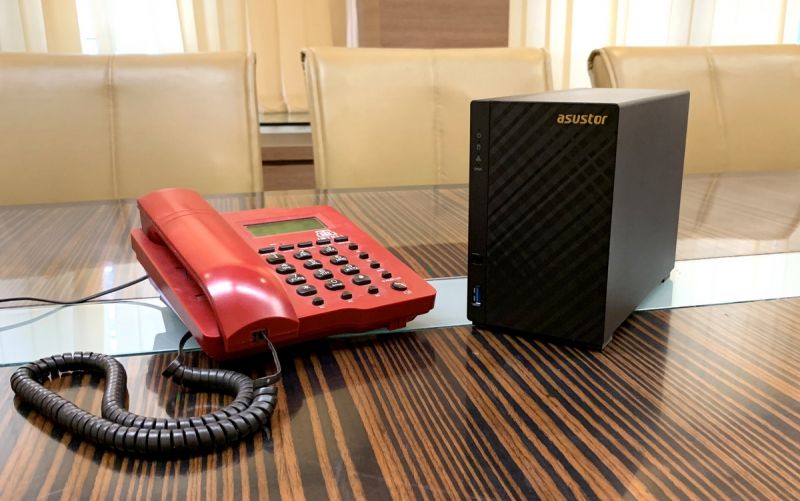 With smartphones, tablets, smart TVs and security cameras generating immense amounts of data each day in each home, having a NAS at home is advisable. NAS or network attached storage drives are easy to use and can be expanded as per your wish if your data is increasing. You can choose to configure it for speed, flexibility, storage or security by simply deploying the hard drives in different RAID configurations. NAS drives are available from a minimum of dual-bay units and can go all the way up to 16 drives and even more. For homes, a dual bay drive NAS is sufficient — simply pop in two 4TB hard drives and you can have a secure 4TB storage or an 8TB large tank. A NAS be used to store your entire family’s personal data, and can also be accessed remotely from anywhere around the world. In short, you can carry all your data with you, wherever you are and all you need is a simple internet connection. 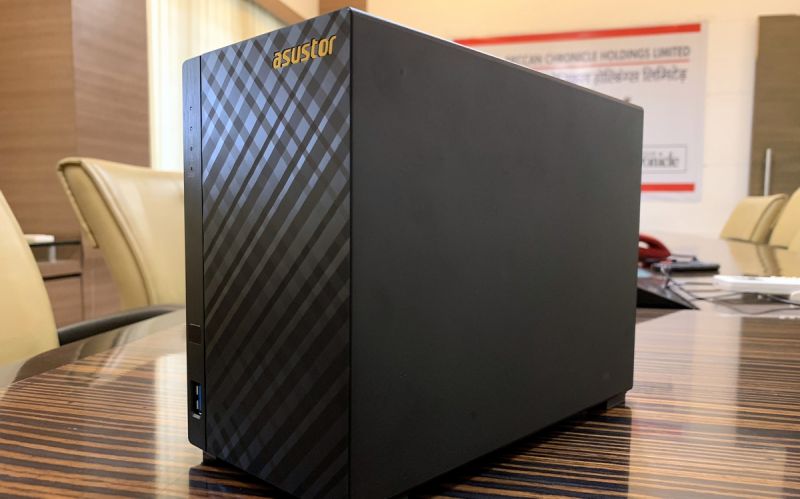 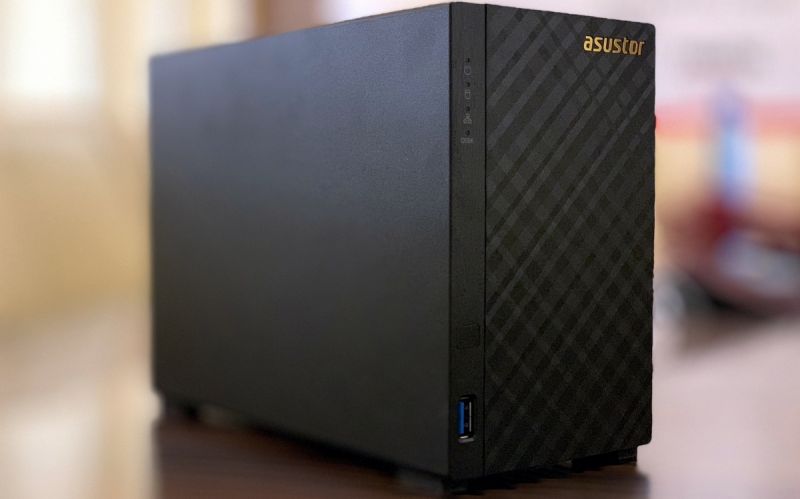 We reviewed one such NAS from ASUSTOR. The AS3202T is a simple 2-bay NAS drive with features that are great for home and very small businesses. With the NAS, you can centrally store and share your data — be is documents, music, videos or photos, run a website or intranet, have a personal email server, or even run your entire home’s CCTV network. 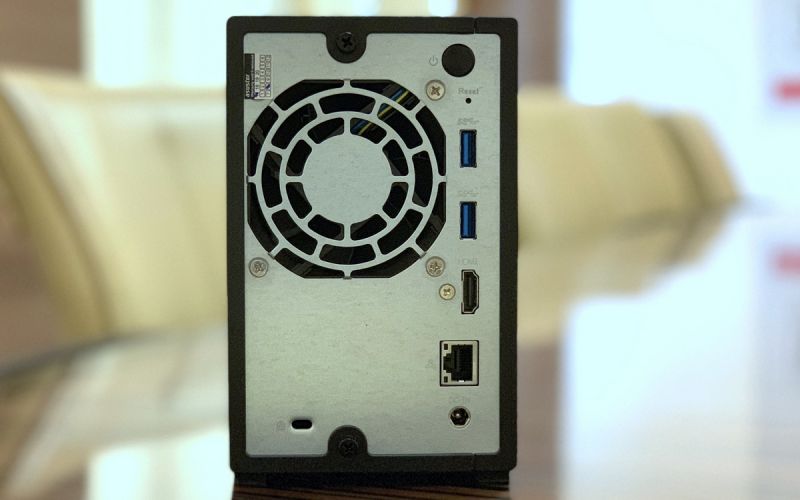 The AS3202T is a simple 2-bay NAS and holds two internal hard drives (3.5-inch or 5.25-inch HDDs or SSDs). However, these are not hot-swappable — which means — unlike conventional NAS units, you cannot unplug/replace hard drives when the NAS is powered on. The unit needs to be opened and the hard drives need to be changed by unscrewing four screws each. 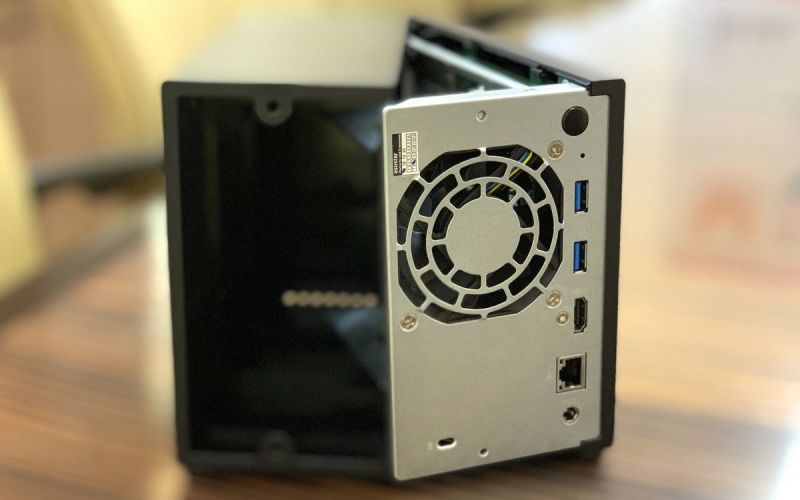 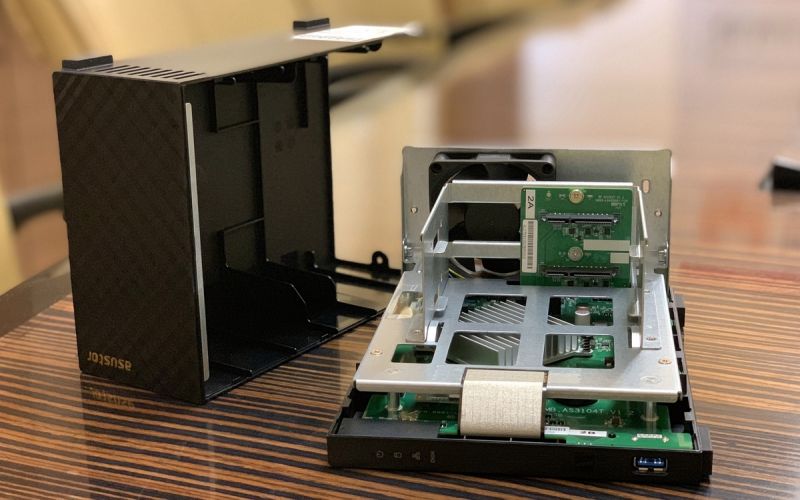 The ASUSTOR AS3202T is equipped with a 1.6GHz Celeron quad-core processor and supplied with 2GB of internal dual-channel RAM. Combined with high-speed NAS-ready hard drives, one can acquire read/write speeds of up to 112MB/s and 110MB/s respectively while using the redundant RAID 1. Each bay can support up to 14TB hard drives, which can make your network storage hold up to a massive 28TB using JBOD or RAID 0. If you wish to add more drives, you can use expansion units and expand up to 14 hard drives, making the entire configuration a whopping 196TB. The NAS also supports AES-NI hardware encryption to help keep your data safe. 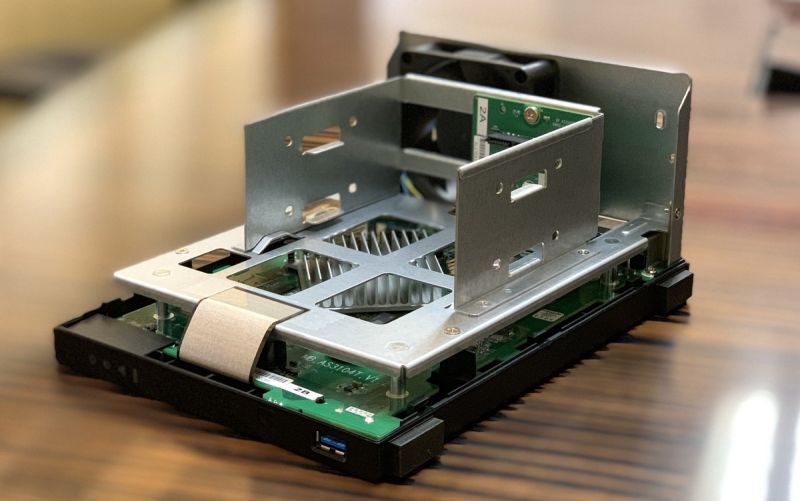 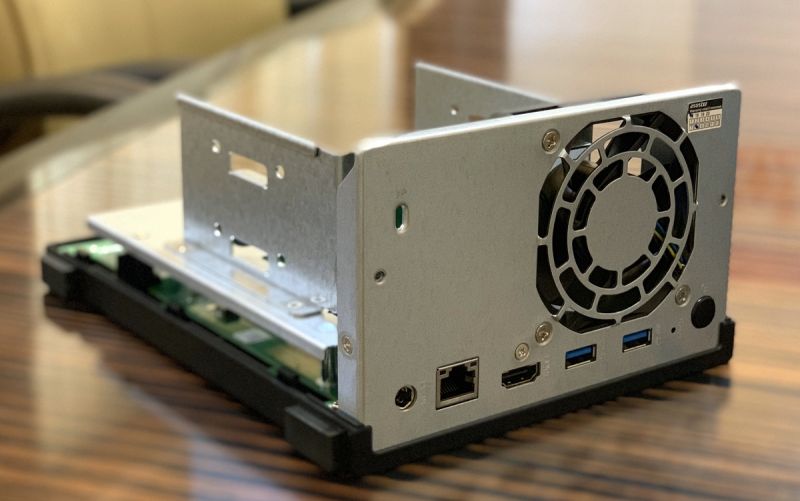 The AS3202T works on a Gigabit Ethernet port for a high-speed throughput requirement. It also supports three USB 3.0 ports — one on front and two on the rear. Lastly, an HDMI 1.4p port on the rear allows users to plug in a TV or monitor to enjoy multimedia. In short, you can use this NAS as a media player to stream movies, photos and music to your network devices, over the internet as well as to your television directly. It uses a hardware acceleration engine that supports format such as H.264 (AVC), H.265 (HEVC), MPEG-4 Part 2, MPEG-2 and VC-1.

The NAS is powered by an external 65W power brick and the internals are cooled using a single 70mm fan. 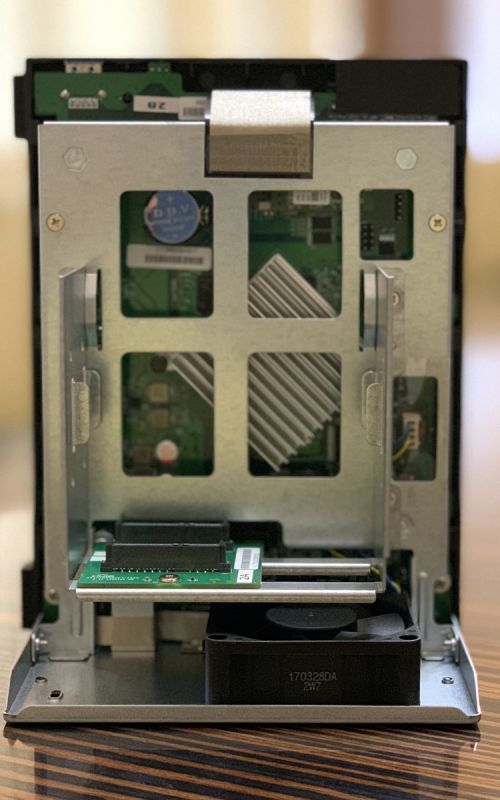 The AS3202T is a simple NAS that comes as a barebones unit (without storage drives). It is around the size smaller than a conventional toaster and built with a rugged metal chassis, which is powder coated with a chick matte finish. It stands 165mm tall, 102mm wide and 218mm deep and weighs 1.17kg without hard drives. The front panel is a plastic bezel with a blank face. Four LEDs up front denote the status for power, hard drive activity and network, and a USB 3.0 port for instant and convenient backups from external storage drives and alike. The rear has two thumb screws for easy access to the internals without the need for a screwdriver. The rear features a large power button, two USB 3.0 ports, an HDMI port, an Ethernet port and a power jack. Lastly, the bottom has four rubber legs to keep the unit stable and vibration-free on the desk, along with a few vents to help airflow. The NAS has a power consumption rated at max 16.4 watts in operation and as low as 0.79 watts when in sleep mode. 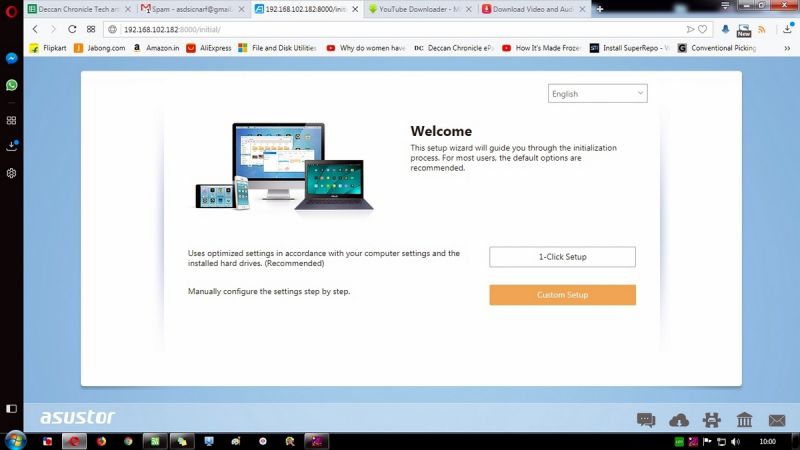 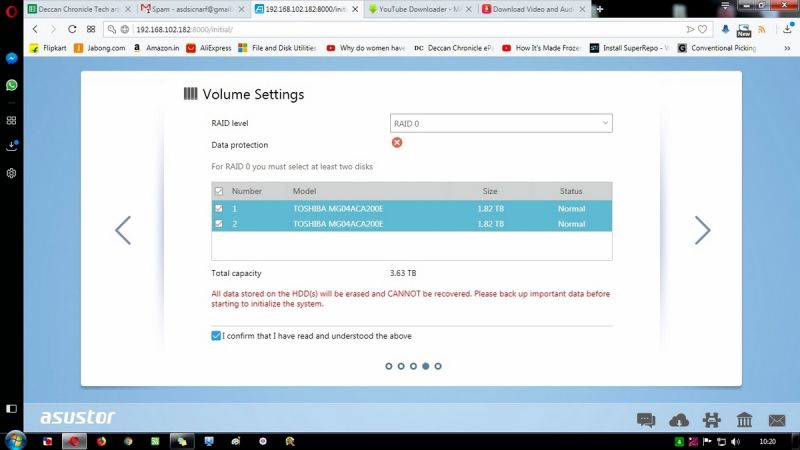 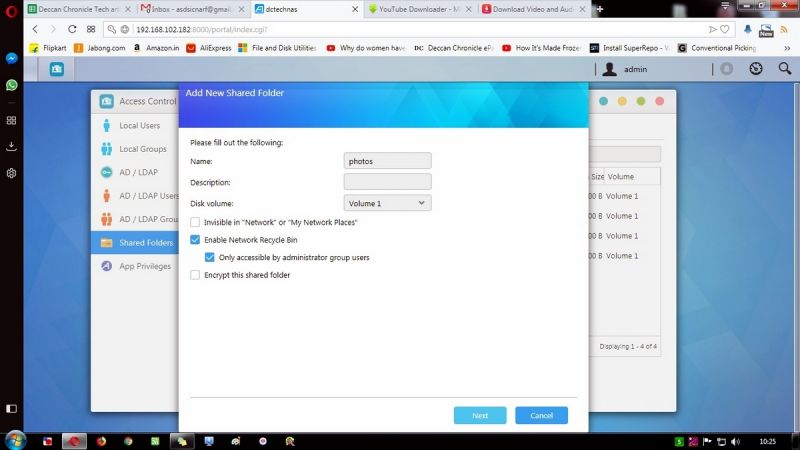 Installation is very simple — simply plug in two SATA drives, close the unit, plug in your network cable and power on. The rest can of the setup can be done using a simple software that one can install on the PC or if you can manage to hit the IP address for the NAS, you can use a conventional browser to start configuring it. The AS3202T uses the ADM 3.1 operating system, based on Linux and uses the EXT4 file system for the internal storage drives. Internal storage drives are only configurable in RAID 0, RAID 1, JBOD and single disk. 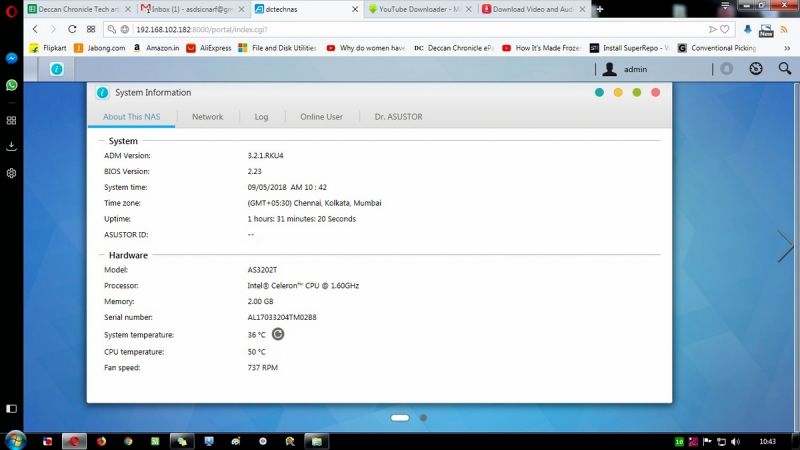 Begin installation by updating the firmware (if any), configuring users and groups, format the drives with new volumes, create shares and assign users to the shares accordingly. Once done, you are good to start filling the drives with your data. External storages compatible are FAT32, NTFS, EXT3/4, HFS+ and exFAT.  The operating system is a web-based management system that supports ISO mounting and external optical disks too. Other features that the 3202T supports via USB are Bluetooth dongles, printers, speakers, Wi-Fi dongles, mouse, keyboards, IR receivers and CD/DVD/Blu-Ray drives. 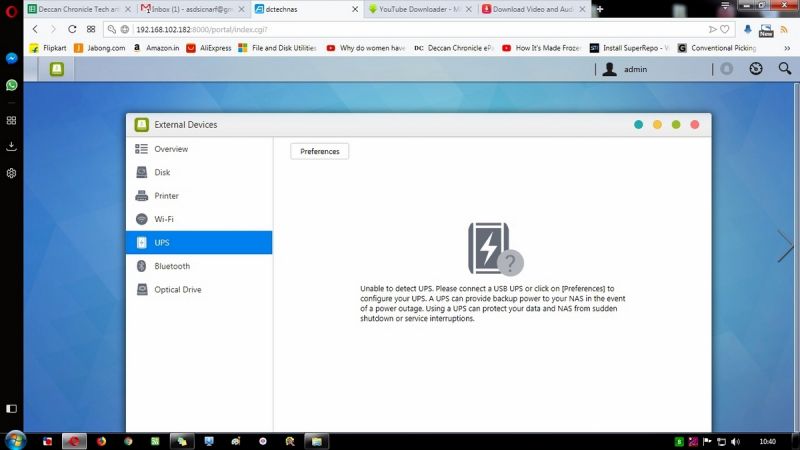 Once done, you can install various applications and packages (similar to apps on phones) and your NAS device will be ready to serve you on multiple platforms. While most of the apps are more or less similar to other NAS devices, this one begs to differ. As we mentioned earlier, this NAS device has an HDMI port that supports an external display monitor or television. Simply plug in your TV, install an app on your smartphone and use it as a remote to control a host of media on your NAS. You can now dump all your movies, videos, photos and music on your NAS and use it as a media player. The only drawback we found was the missing physical remote controller that could have added more value to the product. You can install an optional USB IR controller though and use a third-party remote controller to do the job for you. 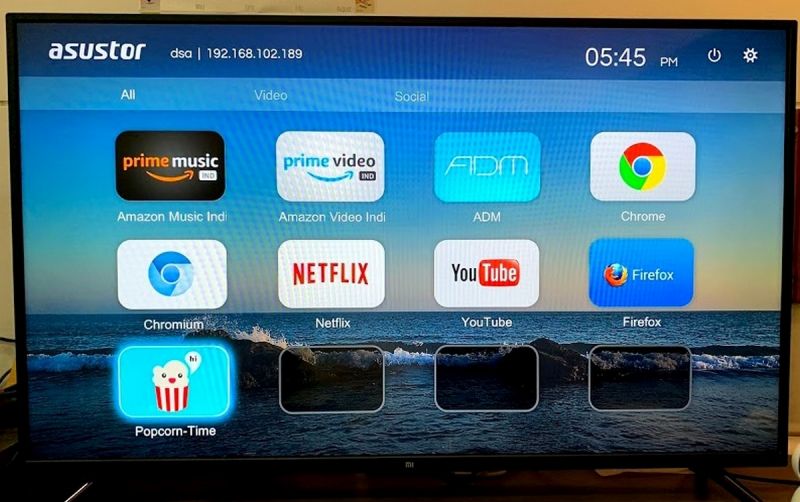 Getting down to the performance, the ASUSTOR NAS is almost similar to conventional network storage systems around. The entire bandwidth or data speed completely depends on the network support and RAID configurations. Since this one is a basic NAS meant for home and very small offices, there is only a single 1Gb/s Ethernet slot for your network. Unlike other NAS you cannot upgrade the network to higher speed ones because of the lack of a PCI-express expansion card slot. However, we cannot complain as this NAS is meant for home use and is not professional enterprise needs. 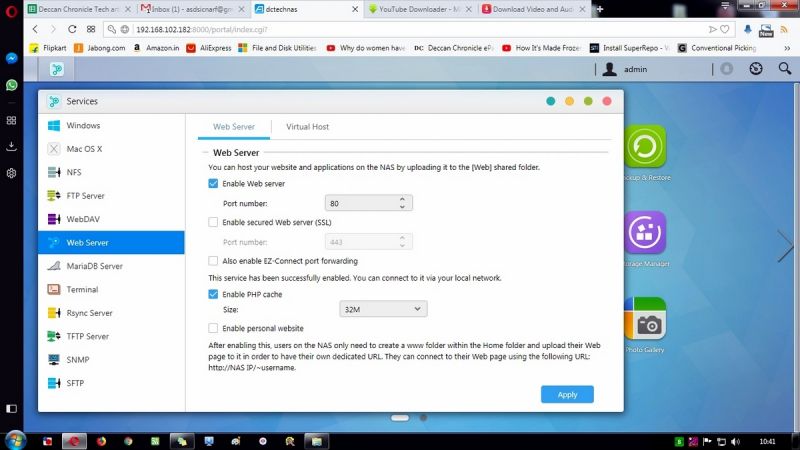 We tested the ASUSTOR AS3202T using some basic benchmark software to get some idea of the performance in raw file/data transfers. For the test, we used two 2TB Toshiba MG04ACA200E 3.5-inch SATA 6GB/s 7200rpm 64M 512e Enterprise hard drives and paired them in RAID 0, the fastest possible speeds one can get. In the test (based on up to 2GB file size) we received average speeds of around 112MB/s in read/write speeds that make it good enough for most work in small offices and equally powerful for media files at home. The NAS can do data transfers over the network at high speeds, provided you have a 1GB/s Ethernet card, switch and CAT6 cables running across your PCs. Using the NAS for data over a Wi-Fi network will purely depend on the respective interfaces and the distance between the router and the NAS. Nevertheless, you will be able to use the NAS with best speeds suited for your work in either interface. 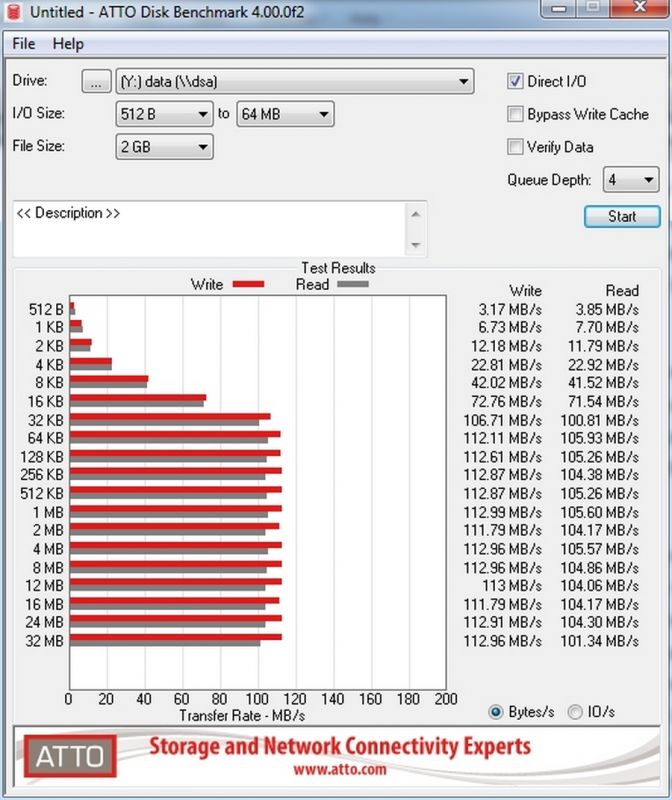 As for the media performance, you need to setup your device with media servers for music, videos or photos. Install the respective packages on the NAS that you are comfortable to configure and use. We prefer using Twonky or Plex servers as it has the best features out there. Make sure you setup the servers and map the media folders accordingly and work with a compatible desktop/mobile client app or smart TV respectively. 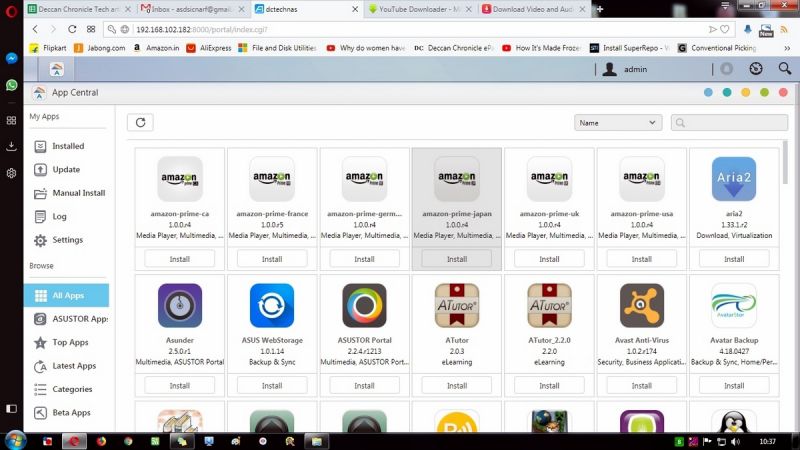 The ASUSTOR AS3202T seems to be the perfect alternative to home-based cloud storage. The NAS is robust, easy to install, feature rich and requires almost zero maintenance. Simply plug in compatible and sufficient storage drives, configure it once and you are good to go. The ASUSTOR NAS is beneficial for those who have a lot of data to store locally for faster access, especially those who have plenty of photos, music, movies and home videos. Spending on internet data each time is not wise and investing in a NAS would add to your benefit. Those seeking a central storage for home and small offices can look at the ASUSTOR AS3202T as a basic necessity or as a starter NAS. The ASUSTOR NAS is available for Rs 39,483 without hard drives and comes with a 3-year warranty period excluding accessories.