Technology Other News 10 Sep 2016 WhatsApp gets new se ...
Technology, In Other News

The new feature allows the user to take selfies in the dark from the built-in camera app itself.

WhatsApp seems to be in a rush to get itself on a feature-rich train before other OTT messaging apps take over. Just a few days ago, the developers updated the messaging platform with a Snapchat-like feature. The update featured options to doodle or draw on top of photos, as well as include text overlays and add stickers and emoji icons. And this time, the new beta update has also added a new selfie flash update.

While the feature is not actually unique since most smartphone cameras are already having the selfie flash option, WhatsApp has just pushed the feature to help users capture selfies in the dark.

The new feature allows the user to take selfies in the dark from the built-in camera app itself. When using WhatsApp to take a selfie, you need to switch the camera to the front-facing sensor. However, since most smartphones don’t have a front-facing LED flash for the selfie camera, this feature makes use of the display panel as a flash. When clicking a selfie, the display flashes a bright white foreground, which illuminates the user’s face when taking a selfie shot. When in selfie mode, on WhatsApp’s camera option, you will see the flash icon appearing on the left of the capture button. You can turn it off if you don’t want to use it. 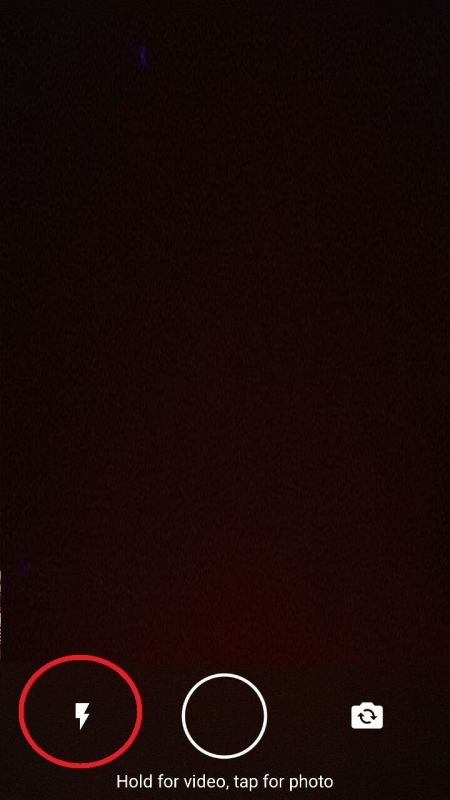 Shown above (circled) is the flash option on a selfie mode in WhatsApp.

However, the flash will be effective only at a particular range and completely depend on your smartphone’s display panel brightness. Since this is in test mode, the feature is only seen with beta testers. There will be many users who would not be able to take advantage of this feature because of smartphone variants. For example, we used the feature on a Samsung Galaxy S6 Edge and found that the display flash did work, but was either delayed or too quick for the camera capture. Hence the flash did not illuminate the face in time and we still obtained a dull image. Since the beta release is in test mode, WhatsApp will have to work with its APIs and codes to make sure that the feature can be compatible with most smartphones out there, or probably have settings to make sure there is a delay in the flash and capture settings to match the timings.

If you have not received the update as yet, you can opt to become a beta tester and get the new update before the final version is released to public. To enrol yourself into the beta testing platform, click on the link below.

Also read: WhatsApp Beta: how to become a beta tester, get early updates