Technology Other News 10 Sep 2016 WhatsApp developers ...
Technology, In Other News

A Reddit user claimed to have found the words ‘Fuck Apple’ written in many lines of code in the WhatsApp APK for Android.

On scrutinizing the apps from WhatsApp, which many developers and security researchers do today, a Reddit user allegedly came across some strange words that the developers at WhatsApp ‘may have accidentally’ left behind or ‘may have deliberately‘ placed it there. Well, it comes in as a big surprise as this incident is not a usual attack or a joke on a major brand, by another major brand.

A Reddit user claimed to have found the words ‘Fuck Apple’ written in many lines of code in the WhatsApp APK for Android. 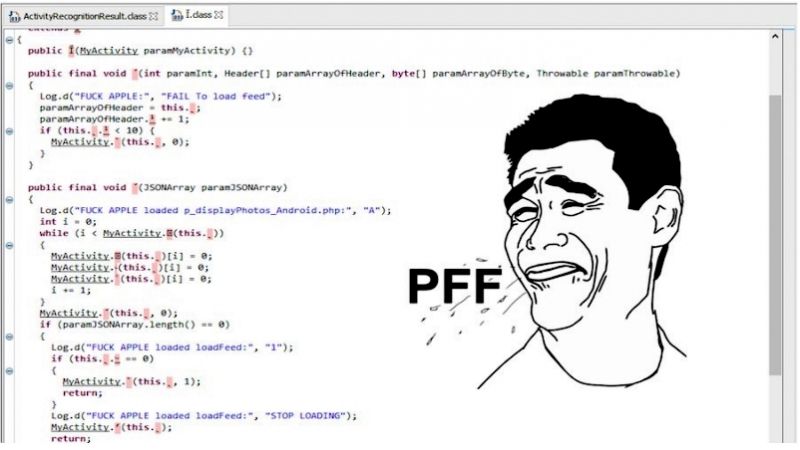 Presently it is not clear why the developer(s) at WhatsApp would have left back those words inside the app, but ‘it could also be a possibility towards Apple’s strict management of the App Store,’ said some Reddit users.

There could be other reasons—maybe the developer was testing the codes with cross-platform in mind and had a little humor while coding. Usually, developers write a lot of comments in the codes and also give some information for their own testing. For example, if the code works, the output should be ‘x’ and if it does not, the return error should throw up ‘y’ on screen. Probably, this ‘maybe frustrated Apple user’ thought of putting ‘Fuck Apple’ in the codes as a way to know if his cross-platform app for WhatsApp works on both Apple and Android. And guess what—‘maybe’ he must have forgotten to remove those words before releasing it to public.

The above incident was highlighted by a Reddit user who said that he was going through the codes of WhatsApp Android APK and found the said abusive words. However, the thread seems to have been deleted, but a lot of other Reditters have slammed the said discovery as fake or hoax. They said that they also checked the same version APK from the WhatsApp website and compared it with another APK found on the file sharing website APK Mirror and confirmed that there was no such words in any of the two files.

The report went viral immediately, making it headlines in some well-known publications abroad. However, presently there is no backing to the mysterious ‘Fuck Apple’ codes mentioned in any of the WhatsApp APK files.

■WhatsApp gets new selfie flash update
■WhatsApp gets another big update; doodle, text and more
■WhatsApp isn’t sharing your info only with Facebook, and you can't opt out
■This is how to forward animated GIF images on WhatsApp