The alleged Snapdragon 865 SoC has been spotted being tested on an Android Q device that features 6GB of RAM.

The Qualcomm Snapdragon 855+ chipset has only recently been announced and it has already made its way on quite a few smartphones. Now, it appears that Qualcomm is preparing another flagship chipset, the Qualcomm KONA which may be the Snapdragon 865 that will be featured on 2020 flagships. And as per a leaked benchmark, the multi-core test shows that it outperforms the competition by a substantial margin as it scored 12,915 points 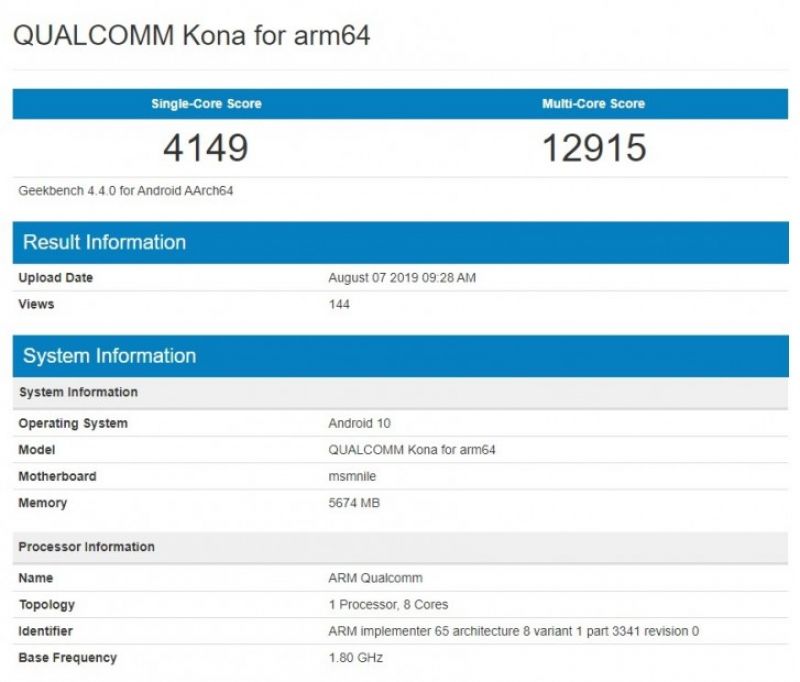 The alleged Snapdragon 865 SoC has been spotted being tested on an Android Q device that features 6GB of RAM; however, this could most likely be a testing platform and not an actual smartphone. The base-frequency shown here is 1.8GHz; however, it is expected to top the 3GHz point even if it is only with one core.

As of now, Qualcomm is close to touching the 3GHz threshold as the Snapdragon 855+ comes with one Kryo 485 core that can reach an impressive 2.96GHz. This means that 3GHz is well within the realm of possibility.

Qualcomm traditionally announces its flagship chipsets in December and hence we expect a whole host of benchmarks to appear on test units before it is officially announced in Hawaii, US. This is the location where Qualcomm usually announces its upcoming flagship processors and talks about their future roadmap.