The telecom company has a database of over 120 million users in India, many of which were registered using a 12-digit Unique Identification Authority of India (UIDAI) provided number, also known as Aadhaar number.

India’s telecom operator Reliance Jio has allegedly experienced a data breach after personal details, including name, email ID and Aadhaar number, of some Jio subscribers were leaked on a website named Magicapk.com.

The telecom company has a database of over 120 million users in India, many of which were registered using a 12-digit Unique Identification Authority of India (UIDAI) provided number, also known as Aadhaar number, which stores biometric and demographic data of holders at a centralised database.

Following reports, many people took to Twitter and questioned the data breach of millions of Reliance Jio customers. 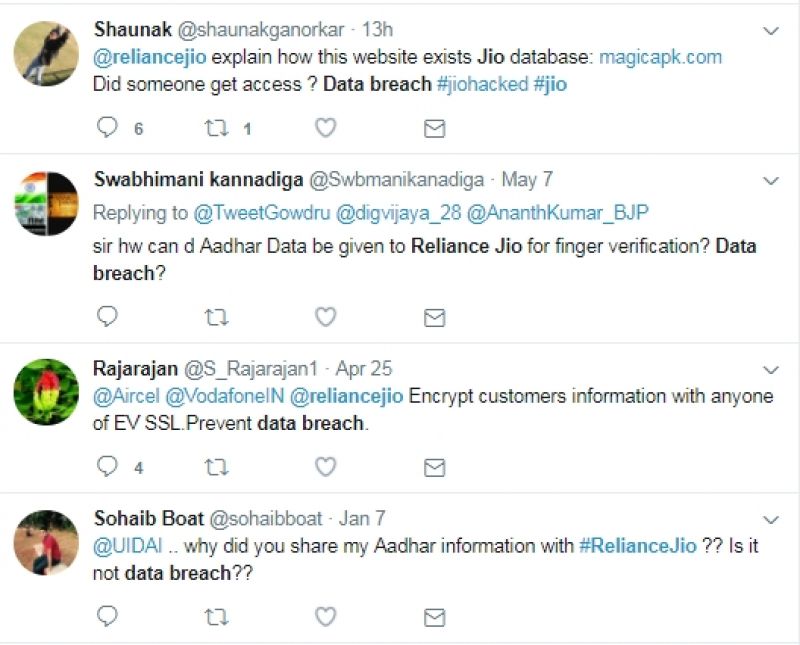 In a statement to Deccan Chronicle, Varun Krishnan of Fonarena said: “Many users and friends were asking about this website Magicapk and if it was genuine. I initially thought it could be a scam but when I tried with my personal number, I got convinced of the leak.

“It was an amateur webpage asking for users to enter Jio numbers, once you submit the form it showed the customer details. I checked several numbers and most seemed affected. I just shared three in the article. I am sure there were a several million more.”

“This is a serious breach and needs to be investigated properly,” he added.

Reliance Jio is presently investigating claims of the data breach and has remarked the data appeared on the Magicapk as “unauthentic”.

“We have come across the unverified and unsubstantiated claims of the website and are investigating it. Prima facie, the data appears to be unauthentic. We want to assure our subscribers that their data is safe and maintained with highest security. Data is only shared with authorities as per their requirement. We have informed law enforcement agencies about the claims of the website and will follow through to ensure strict action is taken,” a Jio spokersperson told Deccan Chronicle.