Technology Other News 10 Feb 2016 Indians fume over of ...
Technology, In Other News

Member of Facebook's board of Director Marc Andreessen.

Mumbai: A couple of days after the Telecom Regulatory Authority of India (TRAI) announced its verdict to support net neutrality and ban differential pricing for data, a well-known Facebook investor and board member has lashed out at India on Twitter suggesting that “anti-colonialism has been catastrophic for India”.

Marc Lowell Andreessen, the company’s board member, was extremely disappointed with the Indian telecom regulator’s decision to ban Facebook’s “Free Basics” in the country. 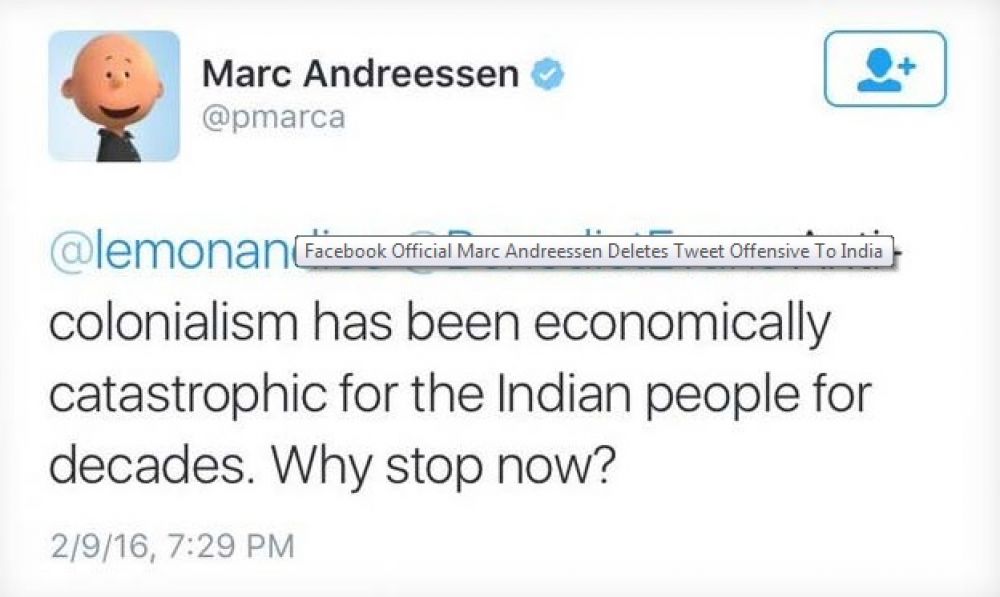 A screen grab of Marc Andreessen's derogatory remark on Indian colonialism.The tweet was taken down by him after he received heavy criticism from Indians for his derogatory remarks on the country. Soon after, Andreessen offered a ‘sarcastic apology’ and promised not to get involved in topics pertaining to India politics or economics.

I hereby withdraw from all future discussions of Indian economics or politics. 😀 Carry on...

And for the record, I am opposed to colonialism, in any country. https://t.co/3ommgZssMm

“While we're disappointed with today's decision, I want to personally communicate that we are committed to keep working to break down barriers to connectivity in India and around the world. Internet.org has many initiatives, and we will keep working until everyone has access to the internet,” he added.

For readers who want to read TRAI’s full order can click on this link.