Technology Other News 09 Mar 2017 Android/iOS are what ...
Technology, In Other News

Android/iOS are what got hacked, not apps/encryption: Snowden on CIA hacking tools

DECCAN CHRONICLE.
Published Mar 9, 2017, 9:40 am IST
Updated Mar 9, 2017, 9:56 am IST
Apple has promised to rapidly address any identified vulnerabilities, Samsung and Microsoft has offered to look into the matter

Edward Snowden, a whistelblower who leaked details of US surveillance on phone and interenet communciation

Former CIA technical assistant Edward Snowden, who leaked NSA documents revealing US surveillance on phone and internet communication, has hinted that vulnerabilities in operating systems caused the agency to hack into devices, not in apps or encryption.

In a twitter post yesterday, Snowden said, “This incorrectly implies CIA hacked these apps/encryption. But the docs show iOS/Android are what got hacked—a much bigger problem.” 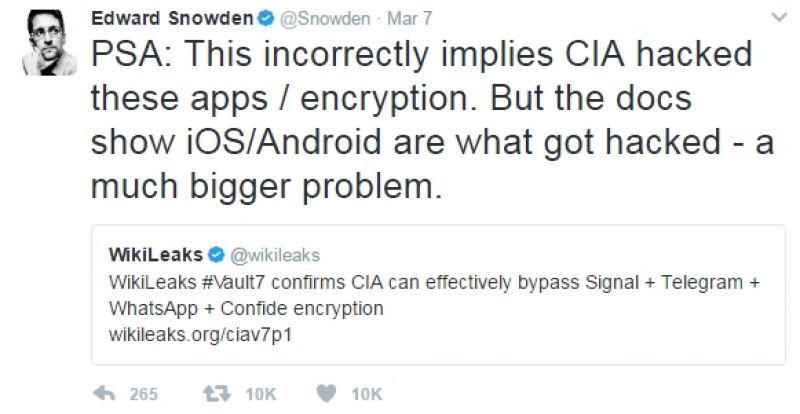 WikiLeaks has released about 8,761 documents from the Central Intelligence Agency (CIA) alleging to have detailed information about the agency’s hacking tools that are capable of spying on phones, bypassing encrypted messaging apps like WhatsApp, Signal and Telegram, and breaking into Smart TVs.

Major tech firms including Apple, Microsoft and Samsung have responded at the allegations raised in the documents released by WikiLeaks.

Apple has promised to “rapidly address” any identified vulnerabilities, Samsung and Microsoft has offered to “look into the matter.”