BJP leads in Gujarat Assembly elections
Technology Other News 06 Nov 2019 You along with nearl ...
Technology, In Other News

We often think that by using social media, we are free and the freedom of the internet conceals our likes, passions and every search we undertake. However, a new report shows that this is the farthest from the truth. What’s really happening is that those of ill faith actors that manipulate elections and government officials are constantly watching users around the globe.

The report that’s titled 2019 Freedom on the Net which was conducted by an independent watchdog organization called Freedom House states that while the ongoing efforts to interfere with elections are a huge concern, the extent of surveillance of users are just as shocking. The report states that 40 out of the 65 countries it studied "have instituted advanced social media surveillance programs."

When speaking about internet freedom, China topped the list as the least free country. Russia and Egypt also fell in the “not free” category and in total 89 per cent of internet users or nearly 3 billion people come under some sort of surveillance program — this number is absolutely jaw-dropping. 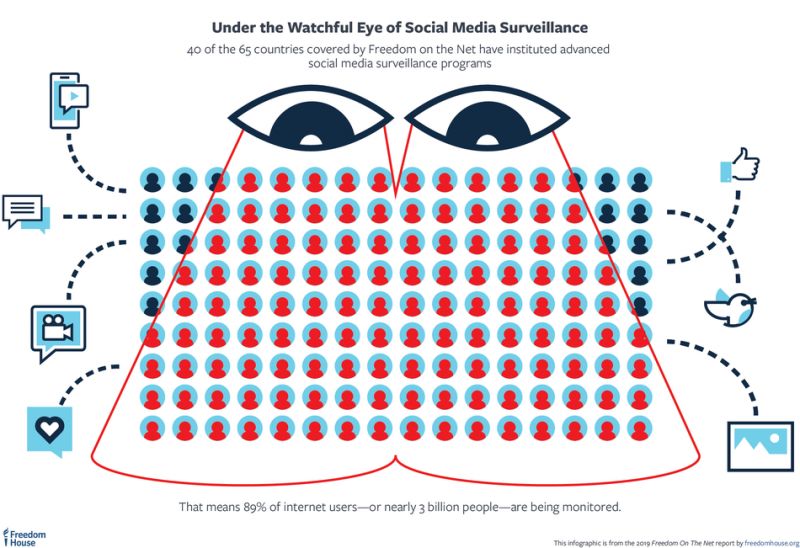 How countries are doing this monitoring is also quite astonishing. The report states that in Iran, “42,000-strong army of volunteers who monitor online speech." China too has a likewise system of recruits that sift through data and flag “problematic content." Chinese company Semptian states that its Aegis surveillance system can monitor over 200 million people in the country.

Even though the United States is classified as ‘free’ of internet censorship, the report claims that the country is far from innocent. The report specifies Israeli cybersecurity firm Cellbrite who recently agreed to a new deal with ICE valued at USD 30 to 35 billion has tools to enable users to easily hack phones and obtain all kinds of data.

The report claims that other countries are sending officials to the US to learn how to keep surveillance on social media. “Philippine officials travelled to North Carolina for training by US Army personnel on developing a new social media monitoring unit," the report adds. Bangladesh’s Rapid Action Battalion (RAB), a government-backed "anti-terrorism" unit that is popular for massive human rights violations including torture and "extrajudicial killings," got the OK to travel to the US in April 2019 to learn how to use “Location-Based Social Network Monitoring System Software.” 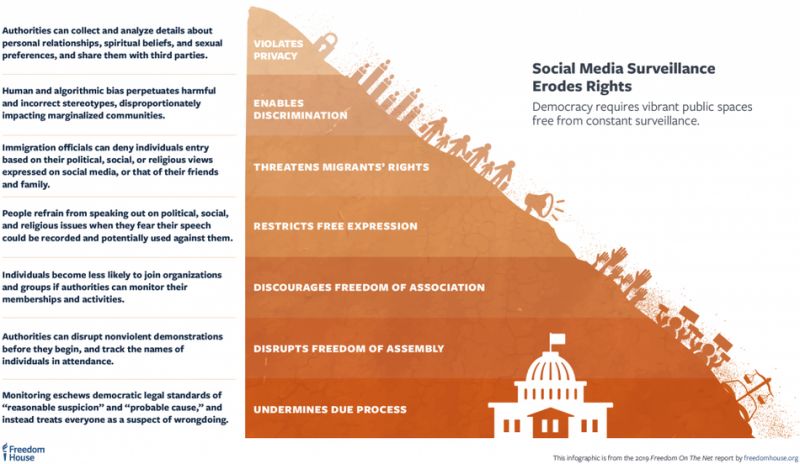 The report also elaborates how these governments are taking advantage of data collected by all this surveillance and the results are scary. The report states, “47 of the 65 countries assessed featured arrests of users for political, social, or religious speech."

To reiterate, it isn’t just the countries that are not free that are doing this. The US and the UK have had surveillance checks on activists and even an instance when an ICE used "social media in New York City to gather information on groups protesting the administration’s immigration and gun-control policies."