Technology Other News 06 Jun 2017 Next Windows Mobile ...
Technology, In Other News

Next Windows Mobile wouldn’t look any different from PC versions

Microsoft has ambitious intentions for the Windows 10 platform. The OS, which is known to be a service rather than a product, has been getting constant updates since its unveiling and has evolved into a highly productive operating system. Microsoft revealed at its developer conference that they are planning a visual overhaul for the OS in November’s Creators Update. That implementation could also see taking part in Windows Mobile version as a recently leaked build reveals the presence of CShell in Windows.

An exclusive report by Windows Central reveals that the upcoming Insider build of Windows has Composable Shell. This means that elements in Windows can be adjusted according to the form factor of the device. Therefore, you will find a mostly similar interface on phones and computers running on the Windows platform, something which Apple has been trying to achieve with its ecosystem.

The Action Center also comes in from the PC version, with all the toggles placed at the bottom the screen and notifications appearing above them. The notifications are actionable and can be swiped away on demand. There’s also a universal landscape mode working on the Start screen and Apps. The UI jumps in and out of apps in landscape mode like you'd expect from an app that supports landscape. Adding landscape mode to Windows phones has been a popular request from Insiders, so it makes sense that Microsoft is finally working on it. 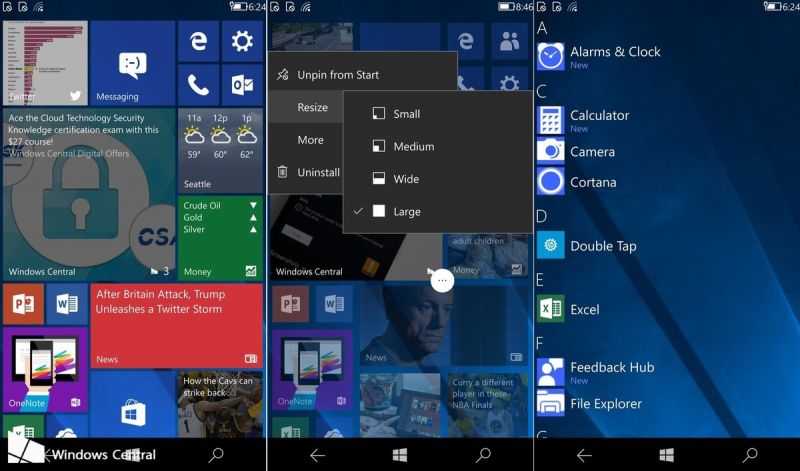 The Continuum feature also gets a boost with Windowed Mode making an arrival on the phone. It can run several apps at one time directly on your phone when connected to an external screen. It supports Windows Snap and Task View, too. Fluent Design elements also work when in Continuum, which is a nice touch.

The visual changes will take some time to be incorporated in the ecosystem as Microsoft intends to bring the CShell to Windows Mobile first and then to PCs, which could see possibility by 2018.