Technology Other News 01 Feb 2017 Next iOS update will ...
Technology, In Other News

Next iOS update will kill your old iPhone games, apps

Apple’s iOS 11 will have a major change and will completely shift to a 64-bit operating system.

If you are using an older iPhone, you should know that if your operating system updates to iOS 11, your older apps could simply shut down. Apple is in full swing and will completely switch to the 64-bit operating system platform with the iOS 11 release. This transition will spell a disaster to older apps that are based on a 32-bit platform and iOS 11 will not have a compatibility with the older apps.

Apple recently released the 10.3 build for iOS and it has been generating a series of warning messages when running older 32-bit apps. The message was discovered by an app developer Peter Steinberger, which warns that the 32-bit apps ‘will not work on future iOS versions.’ The warning also mentions that the app should be updated by the original developer for compatibility with the new operating system. Though the message does not mention anything about any 32-bit apps incompatibility, the research by Peter does confirm that older 32-bit apps are creating the warning messages. 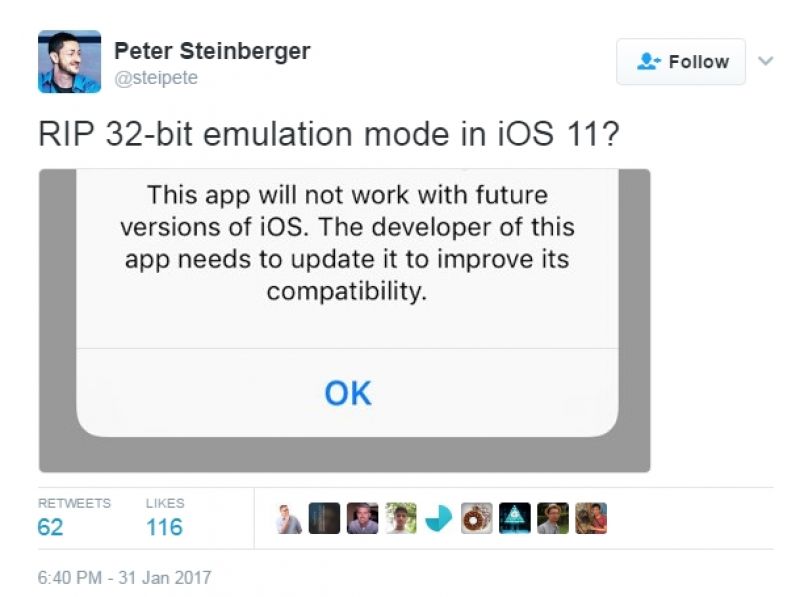 Presently, the older apps will continue to run on iOS 10.3, but iOS 11, which will be launched shortly, will completely drop support for older apps. so if you are still playing your favourite ‘old’ games on your iPhone/iPad, get ready to bid goodbye to them, unless your app’s developer does something to keep them running.

Apple had made it mandatory for all apps on its App Store to have 64-bit OS compatibility, back in February 2015.  This mandatory requirement was for all new app submissions. For developers who update their existing apps, they had a date till June 2015, post which they will also be forced to go with 64-bit compatibility. Most developers were able to add the 64-bit support, however, refrained till the requirement became a necessity as the existing iOS updates were still backward compatible.

The requirement for 64-bit compatibility comes after Apple’s shift towards 64-bit hardware. Apple had introduced the A7 chip, its first 64-bit processor on the iPhone 5S and iOS 7 was the first 64-bit operating system. Apple has shelved all iPhones below 5C since they were running on 32-bit hardware. Hence the new iOS 10 dropped support of the older smartphones and affected users will not be able to download any new apps that are completely built for a 64-bit operating system.

In short, old iPhone users will not get any new apps (unless the apps are compatible with a 32-bit OS) or OS updates, while new iPhone users will not be able to enjoy any old apps, especially those which are not under development anymore. In short, Apple could also be on a move to eliminate the older hardware and force its fans/users to switch to a new iPhone or iPad.

Arstechnica reported that Apple has been contacting its app developers to make sure they are updating their present (or new) apps with 64-bit compatibility.