The OnePlus Bullet 2 wireless is no doubt a great audio product for fans of clean, true and unaltered audio quality.
Rating:

The OnePlus Bullet Wireless 2 launched alongside the Oneplus 7 series of smartphones a few months ago. The neckband-style Bluetooth headset has the task of not just living up to the bar set by the original OnePlus Bullet Wireless, but doing better, and boy does it succeed. But not without its set of drawbacks that may sound like nitpicking considering those cons won’t affect everyone but are disadvantages regardless.

We reviewed the earphones for quite some time and here’s what we felt about the Bullet 2 wireless.

The neckband headset comes in just one colour combination which is unsurprisingly OnePlus’s default Black and Red. The neckband is the regular kind, with two thicker segments that hang around the neck, the right one housing the power button, USB-C port and OnePlus branding while the left goes clean, but has a microphone and volume control piece halfway up to the earbuds themselves. 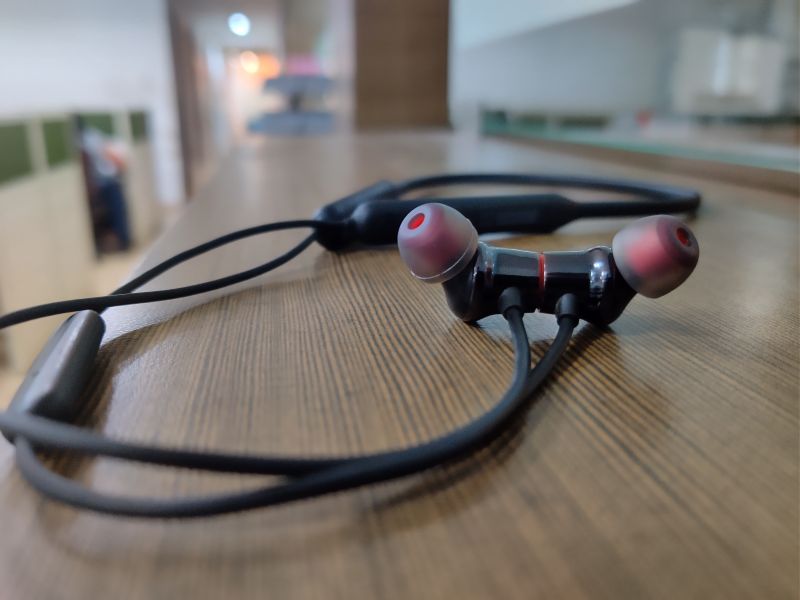 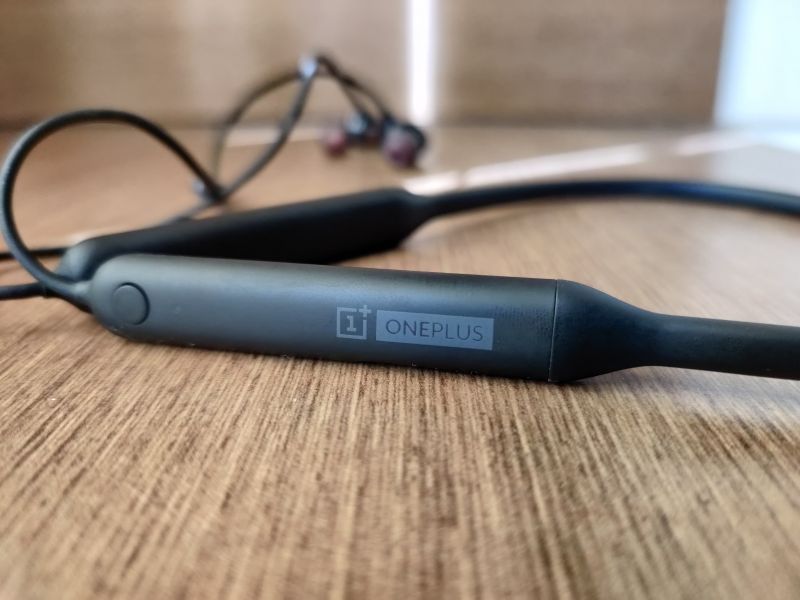 The earbuds themselves have a weird angular design that surprisingly works really well. The earpieces are very comfortable despite having no hook like mechanisms. While they aren’t really marketed as ‘sport’ earbuds, we found that they fit snugly in the ears and didn’t really come out even while we tried a quick sprint every now and then. There are also two noise-cancelling microphones, one on each of the earbuds.

The magnets on the earpieces have a unique feature that turns the headset off when the earpieces are attached together and turns it on when detached (Once detached, the earphones turn themselves off if no connection is made in 5 minutes). 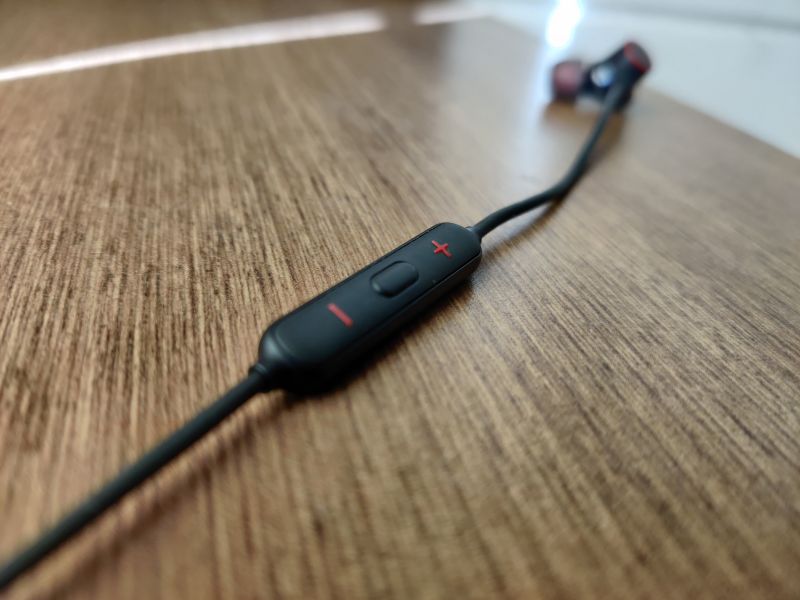 This, while being insanely intuitive in providing that seamless no-button-required experience, end up being a doubled-edged sword.

The fact that you can just pull out the headset from your bag/pocket and put the earpieces in your ears to turn it on means you can get to your music faster than ever, not having to press and hold the power button for a few seconds. This gets even better if you use the Bullet Wireless 2 with a recent OnePlus device (OnePlus 5 and above), where you can enable the OxygenOS feature that starts playing music on the headset when you put the buds in your ears. 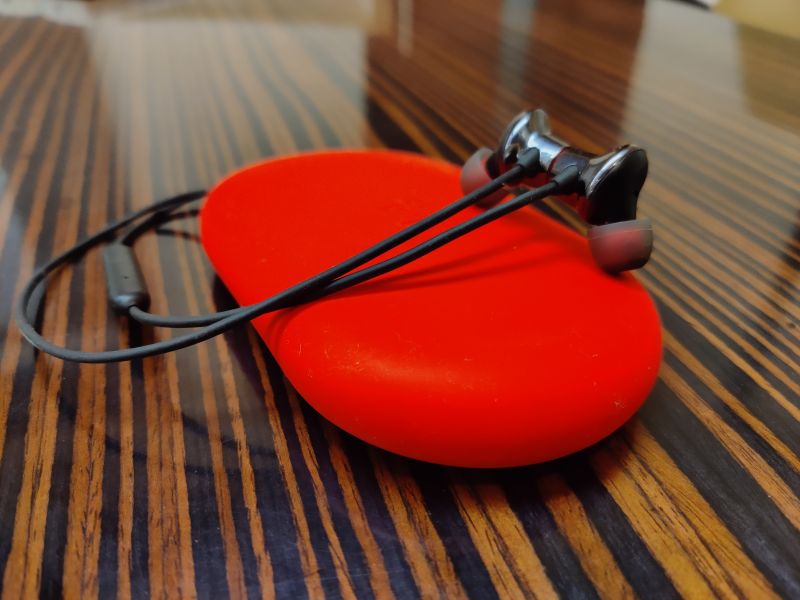 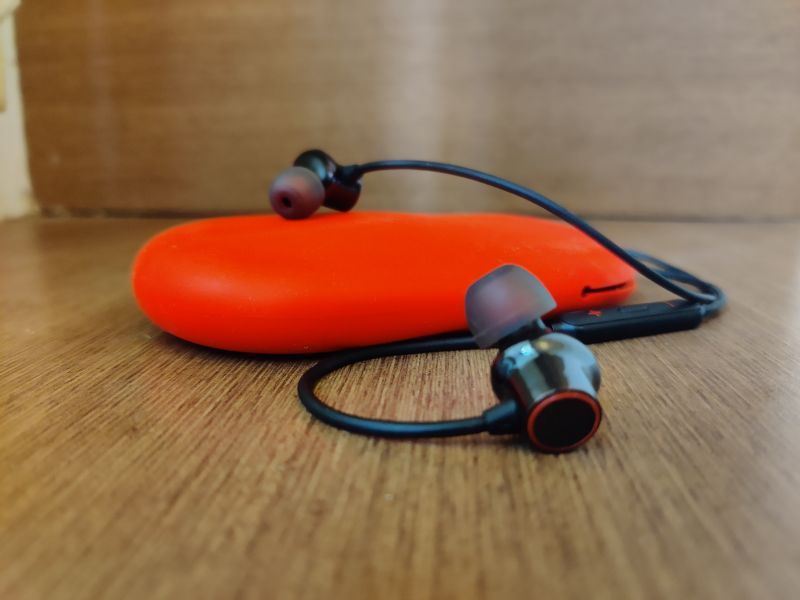 But here’s what goes wrong. If you’re not using the Bullet Wireless 2 and the magnetic heads separate in your bag or pocket, the headset would turn itself on automatically. If you happen to leave your phone’s Bluetooth turned on, for say, keeping it connected to a fitness tracker or smartwatch, the Bullets would get connected to your phone unknowingly, and any calls you get to your phone would get routed to the headset when you receive the call.

While this wouldn’t affect everyone, it is a tiny flaw there is no solution to, as the magnetic heads sometimes disconnect under pressure/movement even when stored in the pouch.

One of the first things we noticed when we used the Bullet Wireless 2 is how clean the sound was. There was no trace of any kind of distortion, even while playing music at high volumes.

Speaking of specifications, the earphones have two Knowles Balanced Armature drivers on each earpiece, that focus on the minute sound details that are usually missed on some earphones thanks to overblown highs or extra-punchy bass. There is also a dynamic 10mm driver in each earpiece which is where the bulk of the output comes from. The earphones also support Qualcomm’s aptX-HD audio which means you hear high-quality audio without compression and loss in quality. So, pairing it with the latest OnePlus smartphones gets you the best audio experience. 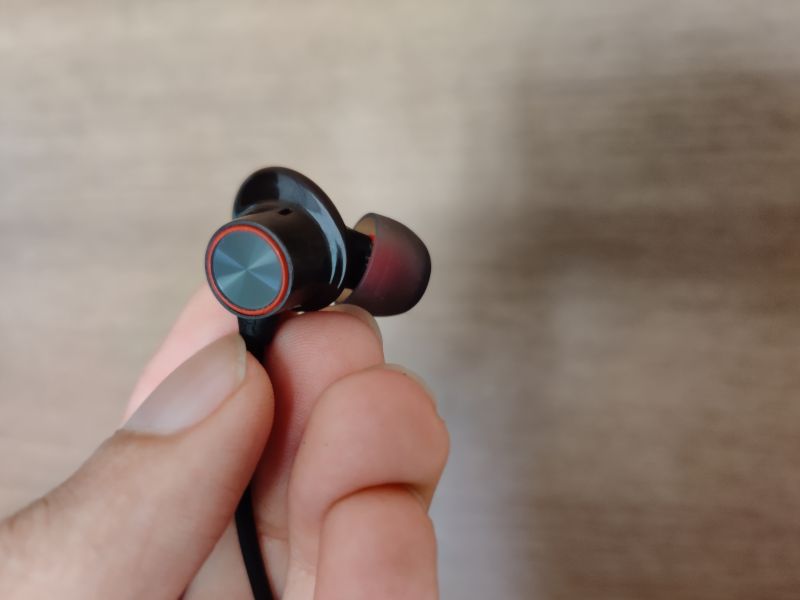 This translates to the headsets producing a well-balanced audio experience that is clearly inclined towards reproducing sound in its true, unaltered form. Hence the bass, for instance, has just the right amount of punch to it, with no excessive enhancement, which actually translates to crisp and clean sound that stays true to its original form.

The battery life of the OnePlus Bullet Wireless 2 is great but what’s more impressive is the charging time. The USB-C powered Bullet Wireless 2 when connected to the 30W OnePlus Warp charger will give you 10 hours of playback in just roughly 10 minutes of charging. Charging it a little while longer for a full charge provides 14 hours of playback. This basically means a quick 10-minute charge would give you enough juice to last a day easily. You practically should never run out of battery on these earphones.

The OnePlus Bullet 2 wireless is no doubt a great audio product for fans of clean, true and unaltered audio quality.  While it still is a neckband in the age of true wireless audio, it does what it’s meant to do and very well at that. Plus, not everybody is a fan of the whole true wireless audio mania just yet, and some people may want the security a neckband offers by keeping the earpieces together and having more battery life.

For the price of Rs 5,990, the Bullet Wireless 2 is a good option for most smartphone users who want a good sounding wireless HD audio solution. The headset is even a better buy for OnePlus users, as the automated seamless experience and the speedy charging makes you feel like the earphones are a part of you, rather than an accessory that you 'operate'.