The QY7 earphones come as a neckband style design and are not true wireless and have a good ergonomic design.

As smartphone manufacturers are gradually dropping the standard 3.5mm headphone jack, the popularity of wireless (BT) headphones continues to scale up. With 2017 being the year that finally kickstarted the truly wireless audio technology with the entry of tech giants into the picture has made the difference in establishing the wireless audio world. Whether you are fond of the new trend or not, either way, wireless headphones are here to stay. The technology is a tad expensive though, but if one has the moolah to spend, it’s definitely worth investing in. However, China being the tech country that has a plethora of tech gadgets, be it OEMs or originals, to even knock-offs, they are competing for the global market with the cheapest prices one can think of. Though the country can produce the finest of tech gadgets, they are known as the most efficient mass producers of electronic goods. 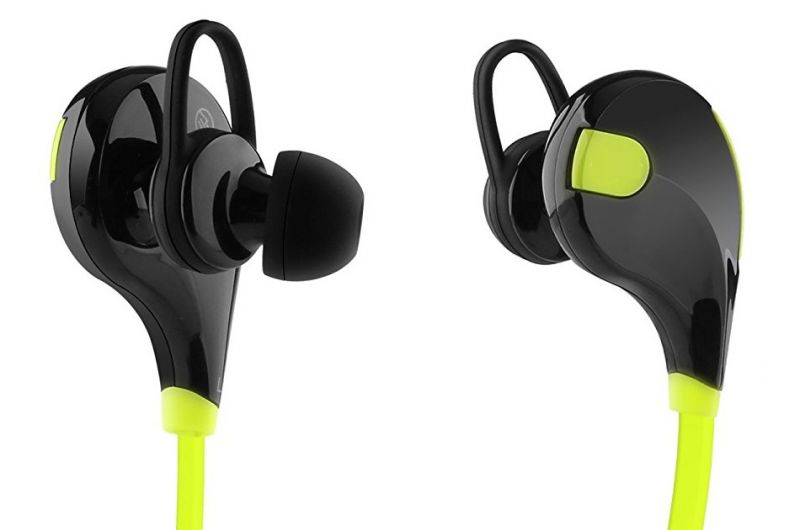 Competition has driven Chinese manufacturers to internally combat their own produce, which is why one will see similar gadgets from unknown players, and for the cheapest prices with the best quality known. However, Chinese manufacturers also heavily cater to the budget-conscious buyers and hence manage to release gadgets that can lure new customers from every price segment. And following this trend, the QY7, an unknown Chinese brand, has launched a set of wireless sport headphones for just $6.5.

In our labs, we had the OEM wireless earbuds that came in for a consideration from a China-based OEM brand, and its model name states QY7. The wireless earphones retail for around Rs 450 ($6.5) in the Chinese market and is rebranded under different names, respectively. These earphones are sold by the OEM manufacturer (minimum order would be around 500 pieces) to different manufacturers and companies under different brand names yet keeping the overall design the same. These earphones are also good for corporate as gift items to guests and employees. Each earphone costs around $6.5, and a bulk offer will go for even cheaper. The OEM manufacturer in China is Weifang Jing Meng Foreign Trade Import & Export Corporation. More products, information and contacts can be found on the link to the manufacturer.

However, though we have seen budget-friendly earphones performing equally good to their expensive counterparts, does this one have it to score above the others? Let's find out. 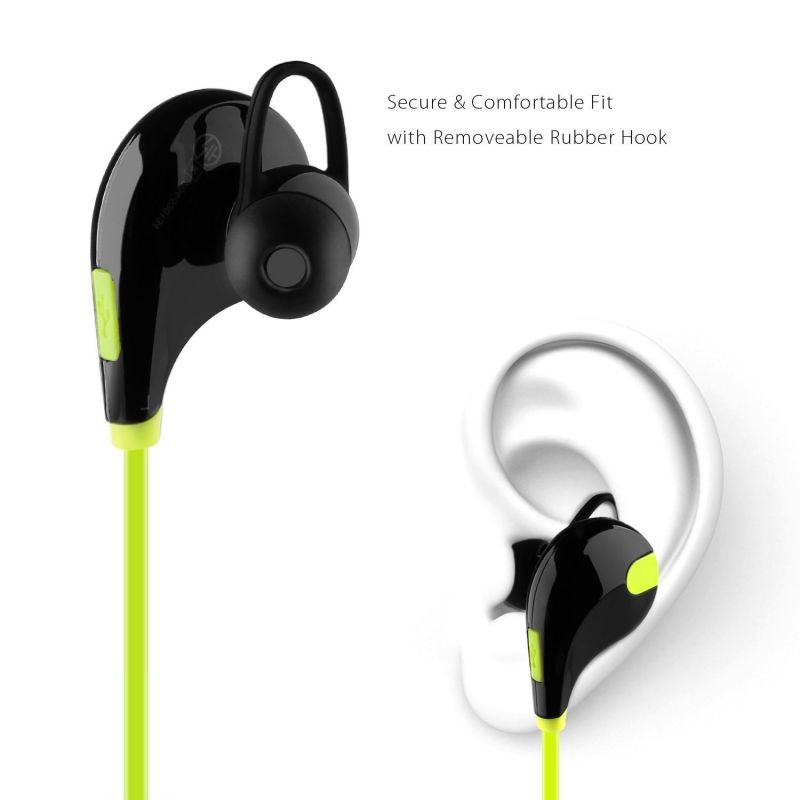 The QY7 earphones come as a neckband style design and are not true wireless. They look pretty cool and have a good ergonomic design — black buds with a fluorescent/neon green cable, with absolutely no in-line remote control. The neon-coloured headphones do seem a bit flashy and might not appeal to everyone's taste. However, the headphones feel plasticky and the build is a bit below average; but again, you can't expect much for its offering price. The headphones housings seem a tad bulky, and they tend to stick out of the ear a little. However, the bulk is because of the built-in battery and remote control circuitry. And even with the bulky plastic casing, the headphones are pretty light — the construction also aids comfort levels. 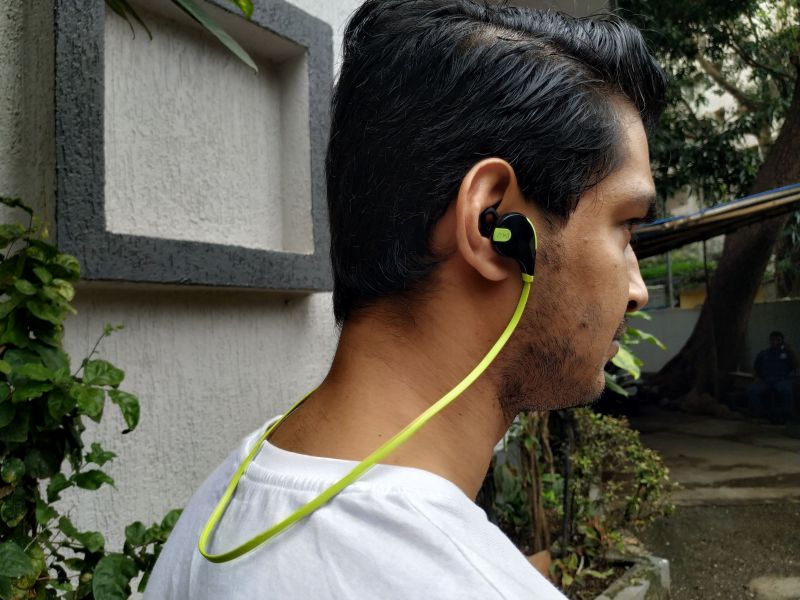 Like most workout-oriented headphones, the QY7 utilises an ear tip/fin combo to offer a good fit — the tips help eliminate ambient sound which acts as a passive noise cancellation, and the fins make sure that the headphones remain snug within the ear, even if you are out for a run. The cord that connects the two earbuds is thin and sports a good quality. It is flat and short and thus helps being tangle-free. 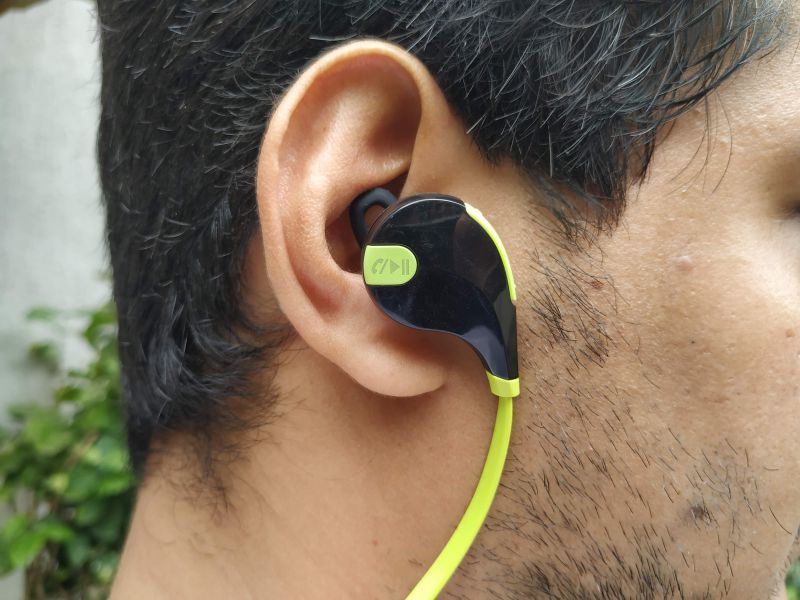 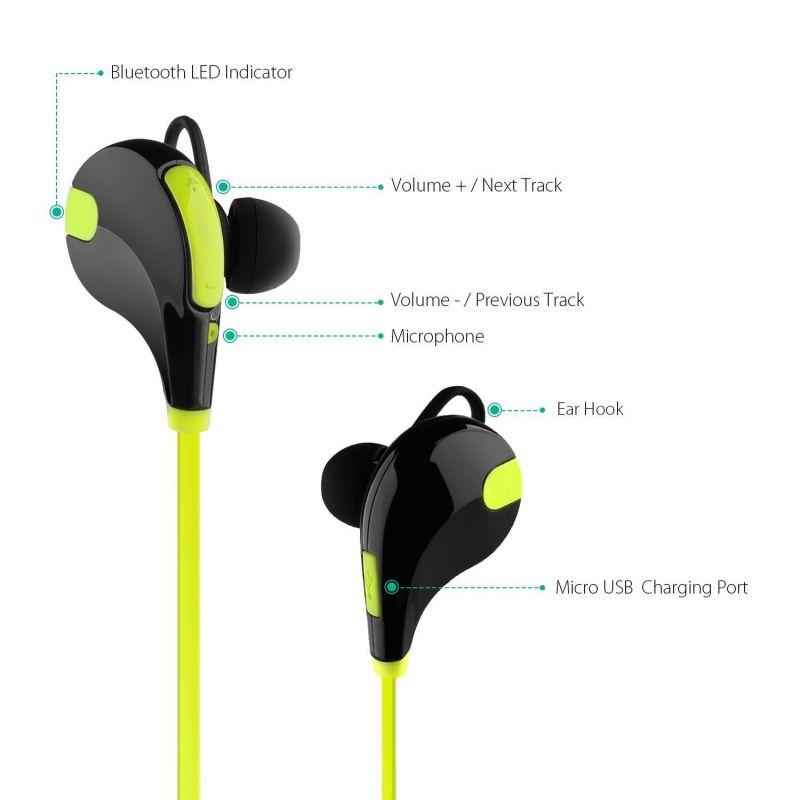 The left earphone, features a micro USB charging slot, with a rubber flap that is pretty difficult to pop open and even shut back. On the right one, the company has managed to squeeze in a tiny power/call button with an LED, apart from a volume up/down rocker on the edge that also helps with track control. The placement of these buttons is not very ergonomic as we found that while adjusting the audio levels, we accidentally also pressed down on the power button very often. It would take the user a bit of time to get accustomed to the button placements. Overall, the build quality is a bit below average, but the selling price well masks the same — no much complaints here.

If you prefer electronic music, then the QY7 is not for you — the oomph in bass-heavy tracks are not as pleasing as you would want it to be. While the casual users won’t complain about it, bass-seekers certainly won’t be pleased. The treble is crisp though, but not as sharp either. While the clarity on offer is decent for the price, songs with layers of instrumentation do sound a bit noisy, but unnoticeable. The vocals are crisp and even when listening in noisy environments, we had no issues with the audio volume much. Additionally, audio quality while on calls is decent and the person on the other end had no qualms hearing clearly. They are good enough for casual music, videos and chat. The pitch is balanced decently well and the mids, highs and lows did not overpower each other. In short, the audio quality is decent, but don't expect much from them.

The QY7 sports a tiny 75mAh battery within and offers around five hours of continuous playback, even though the company claims 3 hours of continuous playback. It took around an hour to charge completely. The standby time is also good and if one doesn't use the headphone a couple of days, the charge wouldn't drop dramatically. The company claims around 200 hours of standby time.

The QY7 wireless sport headphones are definitely worth considering and the audio quality is decent enough for casual listeners. At USD $6.50 (approx Rs  450), you get wireless connectivity, good audio quality and battery life. The build quality and comfortable fit add to the overall value. The product can be purchased from the manufacturer's website directly.

— with inputs from Francis D'Sa, Editor