If you own a gaming rig, then upgrading to newer hardware components is far easier to help you get the best out of gaming. However, if you prefer high-fidelity gaming whilst on the move, then gaming laptops are your only final choice, unless you are comfortable moving around with your television and gaming console.

HP, a well-known entity in the world of computers and printers, also have their lineup of gaming laptops and peripherals, which are now competing with the best in the industry. Their best offering for India — OMEN 17 laptop — is a seriously powerful desktop replacement with some of the best hardware a gamer can ask in a laptop. To see whether the OMEN 17 is worthy of its claim to be the best gaming machine one can buy, we had the OMEN rest on our table, and this is what we have to say. 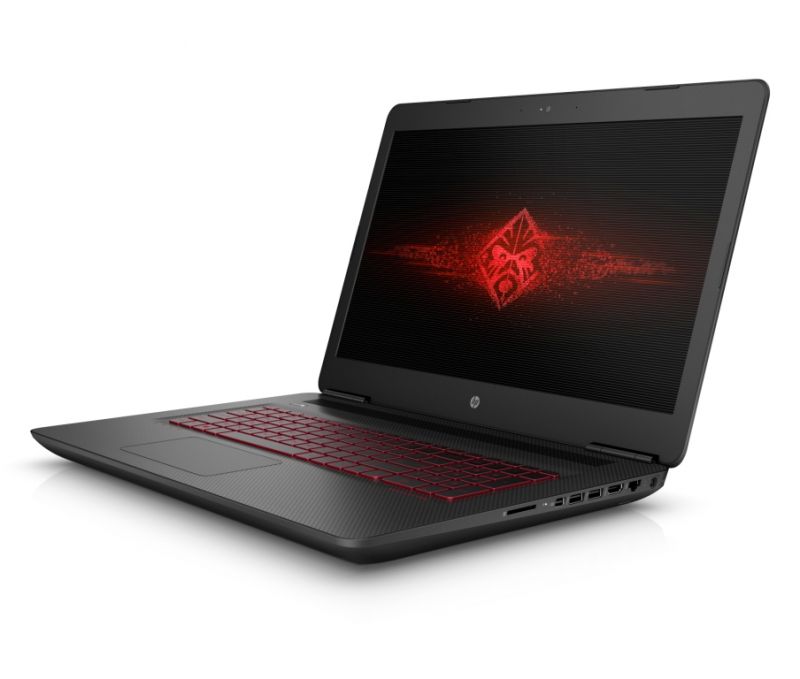 The first and foremost fact to keep in mind while going for a high-end gaming laptop is – you have to forego the idea of usual portability. Gaming laptops have to accompany a lot of powerful hardware within a smaller form factor and the OMEN 17 is no exception. At a hefty 3kg it's pretty heavy, and is slightly larger — thanks to the big 17.3-inch IPS display. Keeping these odds out of the way, let's now focus on how the OMEN 17 differs from its peers. 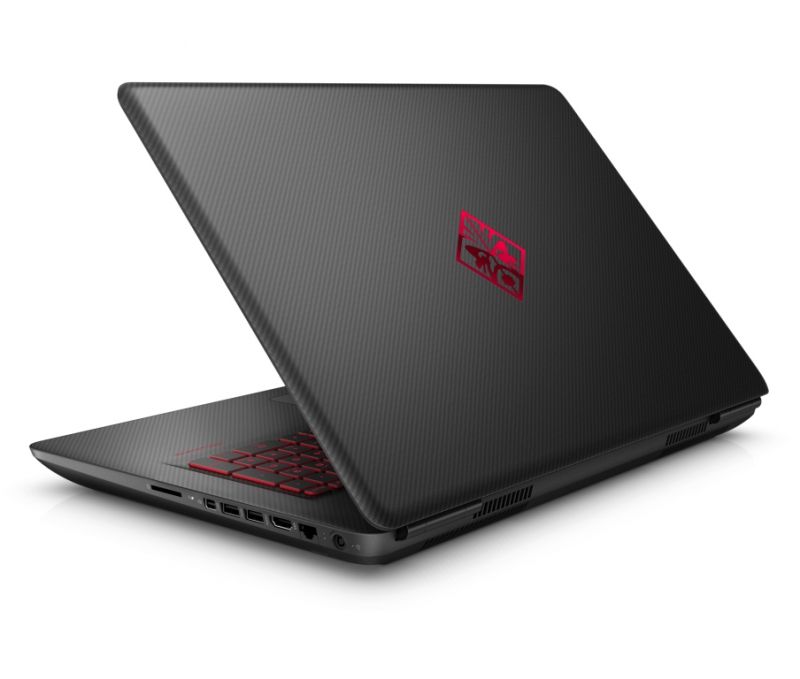 The lid is made of a carbon fibre-textured polycarbonate sporting a glossy red OMEN logo stamped on it. The rest is built with a rugged plastic body giving the entire laptop a feel that it is built from carbon fibre. The lid is smudge resistant, and also has a rubberized feel, which makes it a delight to handle it unlike conventional laptop with glossy exteriors. 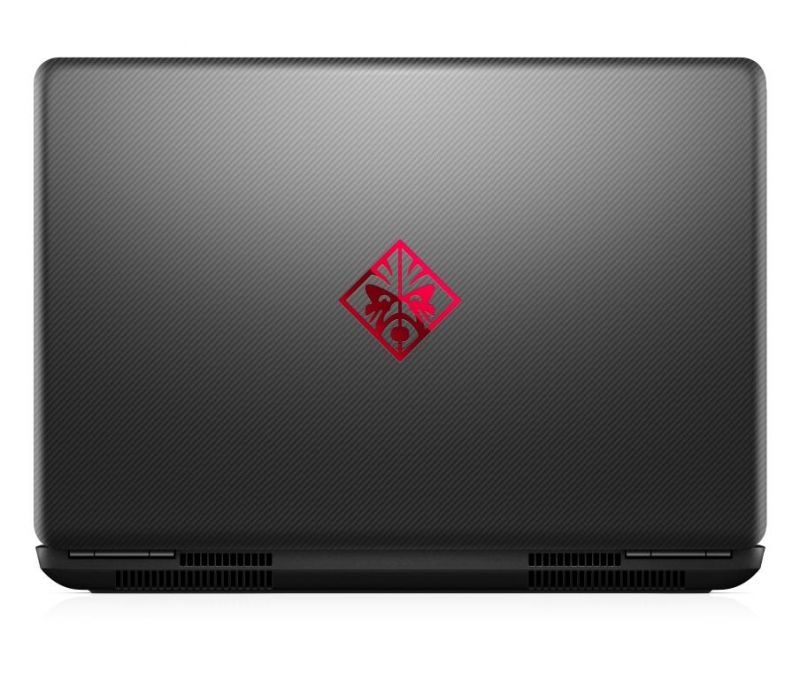 To the left, you have an air exhaust vent accompanied by a USB port, and audio I/O jacks. Moving to the opposite end, you will be greeted with a plethora of I/O ports such as charging, Ethernet, two USB ports, an HDMI, DisplayPort and an SD card reader. The rear houses two additional exhaust vents – we really loved the subtle OMEN branding, that stands out. The front has two Bang & Olufsen speakers placed on the under side, while the two other speakers are placed above the keyboard.

Open the lid and you are greeted by a carbon-fiber finish on the deck, similar to the one on the lid. The display features an anti-glare matte finish, which is a relief for those who intend to use the laptop in broad daylight. A bold red, backlit keyboard and a trackpad are all that you will see on the business end. 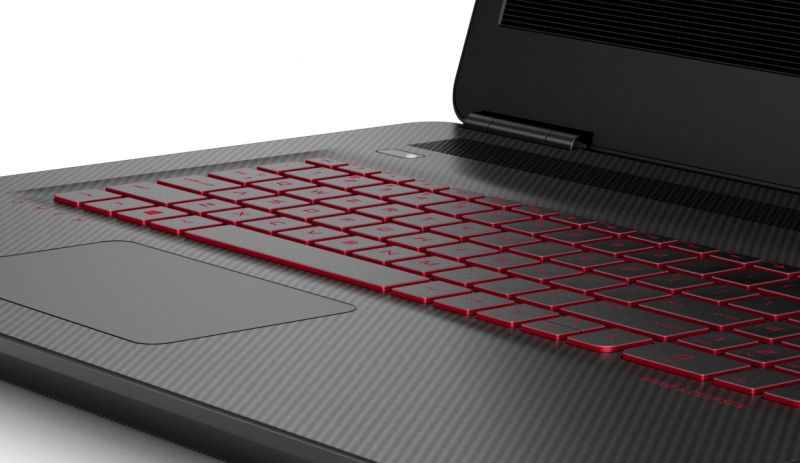 We think that the keyboard’s backlighting is exactly what is needed – not garish but a sight to behold. However, the Chiclet keys don’t have sufficient travel to delivering satisfying feedback during gaming sessions. To elaborate, the arrow keys are too small, which doesn’t make sense for a gaming laptop. We are still wondering why HP would design a keyboard with small directional keys when the laptop is aimed for gaming.

The trackpad has issues too – it’s not as sensitive as one would require it to be for gaming. The buttons are a tad softer, which could be slightly disturbing to hardcore gamers. Nonetheless, you can get around it by using the OMEN SteelSeries mouse and the OMEN SteelSeries keyboard, which are perfect for gaming purposes. However, you have to additionally spend on a keyboard and mouse to ensure your gaming experience is not hampered. 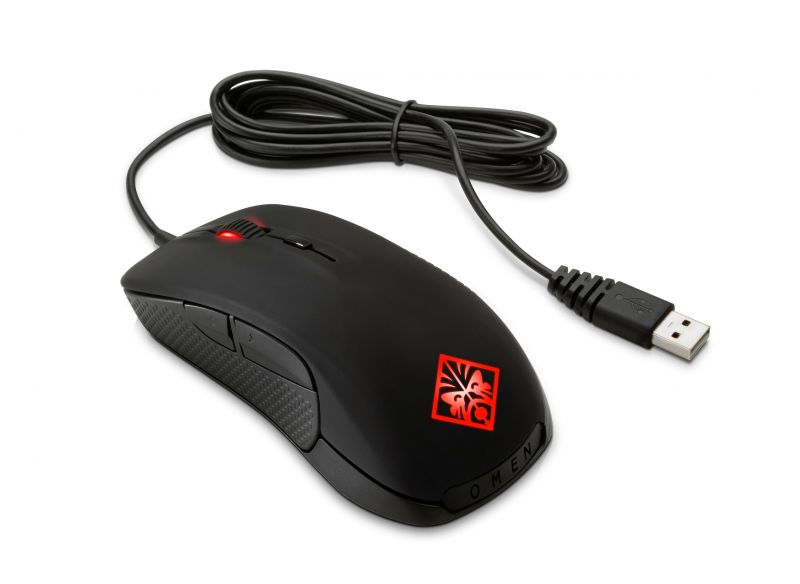 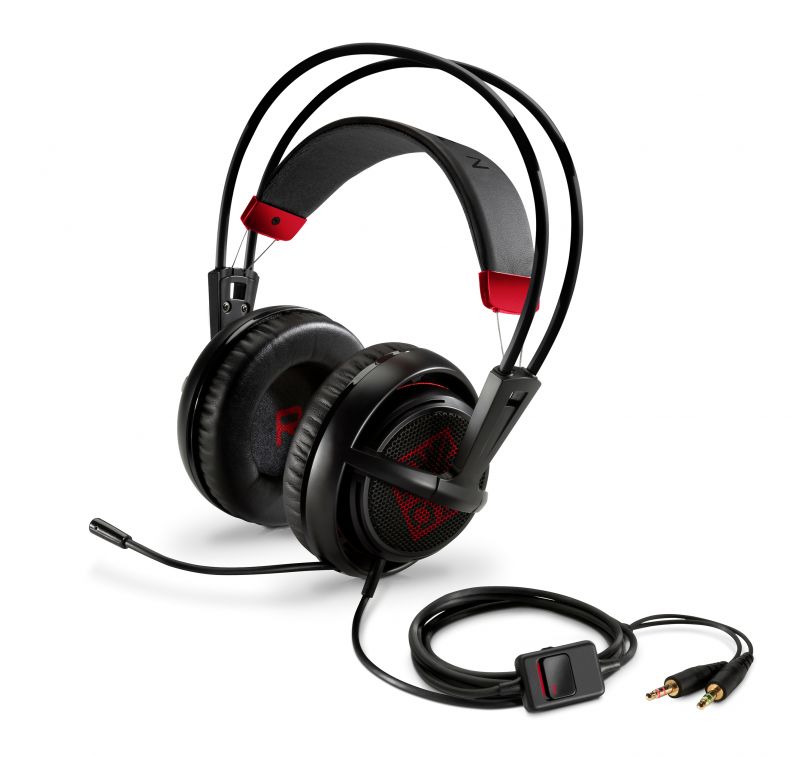 You can opt for the OMEN with SteelSeries Mouse priced at Rs 5,499 for precision cursor control in games. For an enhanced and involving audio experience, you can also opt for the Rs 7,499 OMEN headset with SteelSeries that provides good bass levels and is comfortable to wear for long gaming sessions. OMEN by Mouse Pad with SteelSeries is also a nice addition for enhancing mouse responsiveness, which comes at a price of Rs 2,199.

The OMEN 17’s display is what the doctor ordered. A sufficiently large IPS LCD display with 1920 x 1080 pixels working at 75Hz. Since it has an anti-glare matte finish and is aided by NVIDIA’s G-Sync, you are assured of a really good performance. The brightness can go up to good 332 nits and HP’s claimed contrast ratio of 976:1 provides a commendable viewing experience for hardcore gaming. The only chink in the display’s armour is lack of sturdiness – it reacts to the slightest of physical movements and wobbles uncomfortably. HP should probably work on the lid’s hinges.

The OMEN 17 has various configurations, and the most high-end model is built around an 14nm 7th-Gen Intel Core i7 (Kaby Lake) quad-core processor clocked at 2.80GHz, with Turbo Boost of up to 3.80GHz. The processor also provides up to 6MB cache memory for smoother processing.

Although the laptop comes with an integrated Intel HD Graphics 630, your gaming needs are taken care of by the discrete NVIDIA GeForce GTX 1070 graphics card with a whopping 8GB of dedicated DDR5 VRAM. For those living under the rock, the GTX 1070 with its Pascal architecture is the second best graphics card from NVIDIA in the present market.

Such a powerful specification sheet translates to a computer with super powers in terms of gaming. Whatever game you throw at it, the HP OMEN 17 accepts it humbly and aims for the most involving experience. Forza Motorsport 6 Apex ran on ‘Ultra’ settings with a constant frame rate around 72fps. Batman: Arkham Knight utilised the system's resources to max out its graphics with a frame rate of around 30fps. Project Cars (2015) was a breeze to play with graphics set to the highest configuration and a smooth frame rate. With a seriously powerful Core i7 processor, none of the games that we played on this laptop utilised its full power. 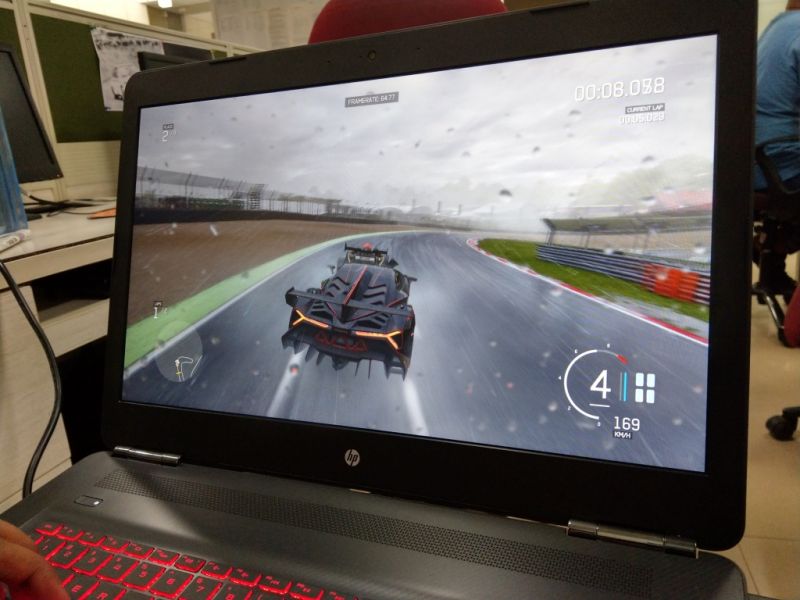 However, gaming is not the main aim for delivery by OMEN 17. The laptop is a powerful workstation and a desktop replacement, that won't disappoint you when using it for work. Since there's some of the best hardware below the hood, you will experience lag-free computing. Simple applications such as Microsoft's entire range of Office programs work flawlessly. Web browsers like Google Chrome and Mozilla Firefox can host multiple tabs without any signs of stress. Heavy duty applications such as video editing apps, photo editing apps, and many alike, are a breeze on this demon.

However, such kind of performance demands a solid power backup and the OMEN 17 is armed for that with its 6-cell 95.8 WHr Lithium-ion battery. Two and a half hours of extreme hardcore gaming and your battery would die — well, this is pretty reasonable for a laptop of this genre. So if you are using the lappie outdoors, and for casual work, you can expect a decent day's work from the battery. 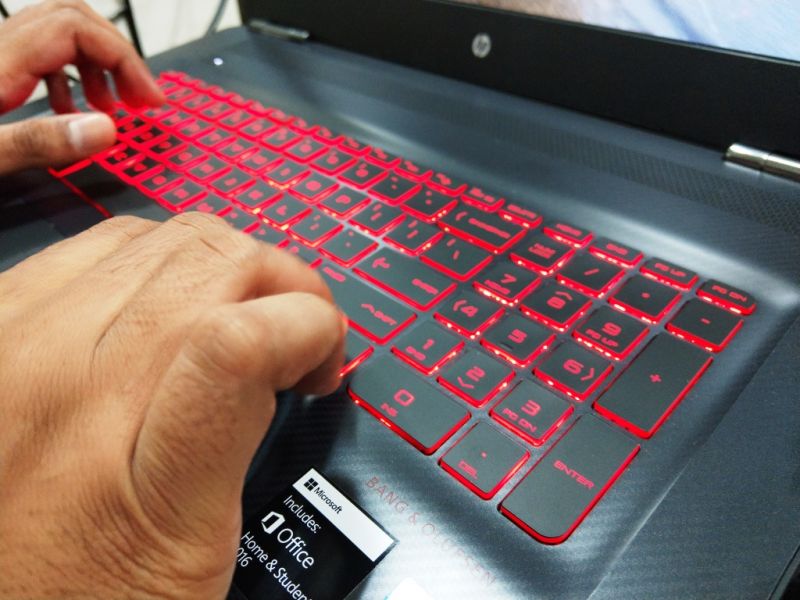 When it comes to heat management, the OMEN 17’s extensive cooling system manages to keep the system out of harm’s way. It does get noticeably hot and could be uncomfortable on the lap during extended sessions of gaming but the performance never suffers due to heating. However, we definitely don't expect you to use the laptop on your lap — it's heavy too! Placing it on a laptop cooler to would be an additional headache if you are an extreme gamer.

Getting down to the basics — the OMEN 17 comes with 64-bit Windows 10 Home operating system out of the box. HP provides certain additional software tweaks to enhance the entire user experience. There’s a host of optimisation apps available from HP for compatibility with printers and other mobile devices. HP has also included an audio tweaking app developed along with Bang & Olufsen for customising the audio profiles according to the user’s taste.

In a nutshell, the OMEN 17 is definitely a desirable gaming laptop. Powered by NVIDIA’s second best graphics card, the top-end processor from Intel, a commendable and large display panel, good audio and HP's admirable build quality, this baby will drain you of a whopping Rs 1,69,990 bank balance. The OMEN 17 is definitely a worthy buy considering the powerhouse within, but do note that it does come with a set of downsides. The keyboard and trackpad are not ergonimically designed for gamers, and the audio quality from the four speakers, though good, do not meet a gamer's expectations. One has to additionally invest on gaming input devices and audio accessories to complete a gaming environment hardware. Neverthless, if we look at the OMEN 17 as a desktop replacement for use as a workstation, we give it a thumb's up.