In line with their EOS philosophy, the imaging leader offers variety of lenses, designed to complement and expand the creative horizons of its users. The new RF lenses are a step towards the future, providing extremely high image quality never seen before. The EOS RP can be coupled with RF mount adapter, allowing users full access to Canon’s existing range of more than 70 EF and EF-S lenses.

Powered by Canon’s EOS R System, the EOS RP is equipped with the RF lens mount introduced in the EOS R. The RF mount sports a short flange focal distance of 20mm and was designed with the intention to allow more possibilities in lens design and innovation. Existing EOS users would be able to utilize their existing collection of EF and EF-S lenses using the optional mount adapter, leaving them spoilt for choice

The EOS RP embodies the familiar, reliable features of Canon’s EOS performance and excellent ergonomics, delivering an unparalleled image quality that caters to both advanced photographers and those venturing into full-frame cameras. With the Feature Assistant, new users would be able to easily navigate while experienced users would be better poised to make full use of each feature to produce better images

Driven by Canon’s advanced DIGIC 8 image processor, the EOS RP is able to deliver superb image quality in any situation. Its Auto Lighting Optimizer feature balances the brightest and darkest point to accentuate the details of the images to deliver a well exposed image, even in backlit conditions

The EOS RP is equipped with a 26.2-megapixel Full-Frame CMOS sensor to capture vivid images with crisp details. Its native ISO range of 100-40,000, which can be expanded to ISO range of 50-102,400, produces low-noise images with rich details, even in low light conditions

The Dual Sensing IS of the EOS RP that detects camera shakes from its gyroscopic sensor and the CMOS sensor provides Image Stabilization that allows user to capture images at shutter speed of up to five stops slower, most useful especially in low-light situations

The in-camera Digital Lens Optimizer corrects aberrations, diffraction and optical distortions as you shoot, producing excellent image quality right out of the camera

Equipped with the Dual Pixel CMOS AF that provides a smooth and lightning fast autofocus speed up to 0.05 seconds, users can capture fleeting moments such as child’s first step

Users will be free to create unique compositions without worrying about the focus, using the 4,779 selectable AF positions within the expanded AF area that covers approximately 100% vertically and 88% horizontally of the frame

The minimum AF luminance of EV-5 of EOS RP provides accurate focus even in poorly lit conditions, capturing that gorgeous smile during the candle light dinner in a jazz lounge

The Eye Detection AF which even works in Servo AF mode will detect and ensure that the subject’s eye is always in focus even at wide open aperture, especially useful when the subject is moving. When in situations which require minimum disturbance, like shooting intimate moments during a wedding ceremony, in museums or simply to capture candid expressions of people without being intrusive, the camera’s silent mode enables users to shoot in stealth, without the sound of a shutter release

For users looking to create images with a large depth of field where everything in the image is in focus, the Focus Bracketing feature of EOS RP would come in handy, especially when shooting macro. It automatically shoots a series of photos based on predetermined settings such as number of shots, focusing range and first focus point. The series of images could be stitched together to form the final image using the Digital Photo Professional software

Together with Dual Pixel CMOS AF, the EOS RP shoots in 4K resolution at 24p/25p video footage allowing users to focus accurately and shoot smoothly. With Touch & Drag AF, users can create pull-focus effects and also enable focus transition simply by moving their finger from one to another part of the frame on the LCD screen

Combination IS provides users with stable footages even without a tripod, through the innovative and improved communication of the RF mount between the sensor and the lens

When recording video with the RF lens, users can adjust the AV setting to make ⅛-stop aperture adjustments, allowing users more precise control over exposure to match the lighting conditions of the shoot. When shooting manually, the MF Peaking function becomes essential, ensuring accurate focusing by highlighting areas in focus

Weighing only 485 grams and built significantly smaller, the EOS RP is easier to handle, especially for users who are new full-frame cameras. For users with larger hands, an optional Extension Grip (EG-E1) comes in handy to ensure firmer handling. 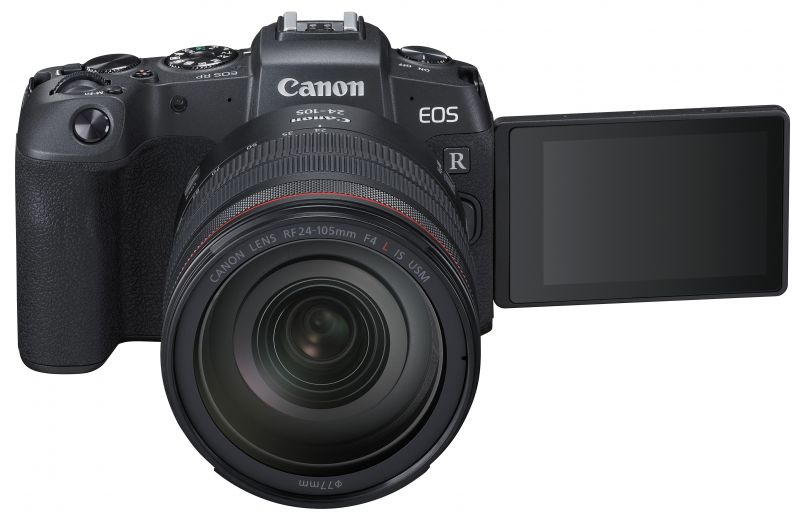 Apart from charging the batteries with the included external charger, the EOS RP can be quickly charged directly with using the optional USB Power Adapter PD-E1, in a speedy manner through its Hi-Speed (USB 2.0/ Type C) Interface

Users can perform any network-related functions by utilizing Canon Camera Connect app designed for mobile devices. When paired, the automatic data transfer function can send photos to users’ smartphone simultaneously while they are still taking photos. This helps with photos management without having to manually transfer images after shooting

The production of 140 million lenses marks a significant milestone for Canon and serves to underscore Canon’s dedication to its customers. RF lenses are engineered to provide the best possible quality in images and videos. Adding a control ring to the system when paired with EOS RP, provides the convenience of customizable exposure settings.

Canon understands the importance of a good ecosystem for camera users and is pleased to share the roadmap of six new RF lenses in 2019. New optical designs for these lenses are made possible by the large diameter mount and short back focus of the RF mount system.

The ultra-wide zoom lens features a large f/2.8 widest aperture. The RF-15-35mm f/2.8L IS USM provides the extreme wide angle view in close tight situations and is suitable for the majestic landscape. The focal length of 15mm to 35mm is versatile for everyday captures to wedding photography. Paired with Image Stabilizer, RF-15-35mm f/2.8L IS USM performs exceptionally well in low-light condition.

The RF85mm f/1.2L USM is an L-series medium telephoto prime lens, featuring stunning edge-to-edge resolution even at the maximum aperture of f/1.2, which expands shooting possibilities.

The RF24-240mm f/4-6.3 IS USM is a compact and lightweight zoom lens with a wide 24mm to a high 240mm (10x zoom). This is a highly versatile lens that would value add to the EOS R system for both still and video shooting.