Zebronics Atom review: A cute companion for lighting up the mood

As a home decorative piece, it impresses with its candlelight effects and therefore, makes for a fancy gifting item this festive season.
Rating:

It’s that time of the year when the market is being flooded with several novelty electronic items to spice up the ambience in your homes. The festive season is all about lighting up homes to ensure a celebratory mood, which is why several manufacturers have been coming out with cute little lighting options. Zebronics wants to rope in on this trend and has therefore brought out the Zeb-Atom — a small LED lamp that also happens to house a tiny Bluetooth speaker. Priced at Rs 1,699, it is positioned as a cupboard decorative piece that can also play some music when the situation demands. We had one on our shelves for a few days to see whether it does what it’s aimed to do.

First things first, the Zeb-Atom looks desirably cute — courtesy of its egg-shaped design. The upper part of the Atom consists of the candle-shaped LED lamp housed within an open plastic casing. The interwoven-fibre design of the plastic does attract attention more often than expected. However, this design also makes it almost impossible to clean the lamp with a fibre cloth or a brush —  a vacuum cleaner could come to the rescue. 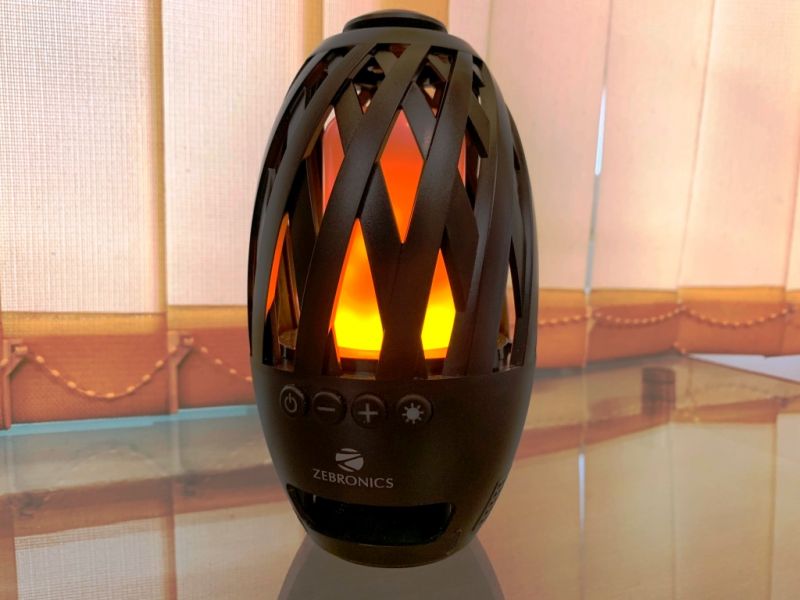 There is a slew of control buttons that handle various parameters of the Atom — a power on/off button, a pair of volume rockers and a single button for switching off/on the LED light. Note that the buttons are backlit and keep on blinking when the speaker mode is switched on. This may take away from the presence of primary lighting effects. However, if you want to keep only the lamp switched on, then you can switch off the speaker mode and turn on the LED lamp solely. There’s also a host of necessary ports — a 5V micro USB port of charging and a micro SD port that accepts cards of up to 32GB. Users can play MP3 audio tracks from the SD card directly on the speaker. 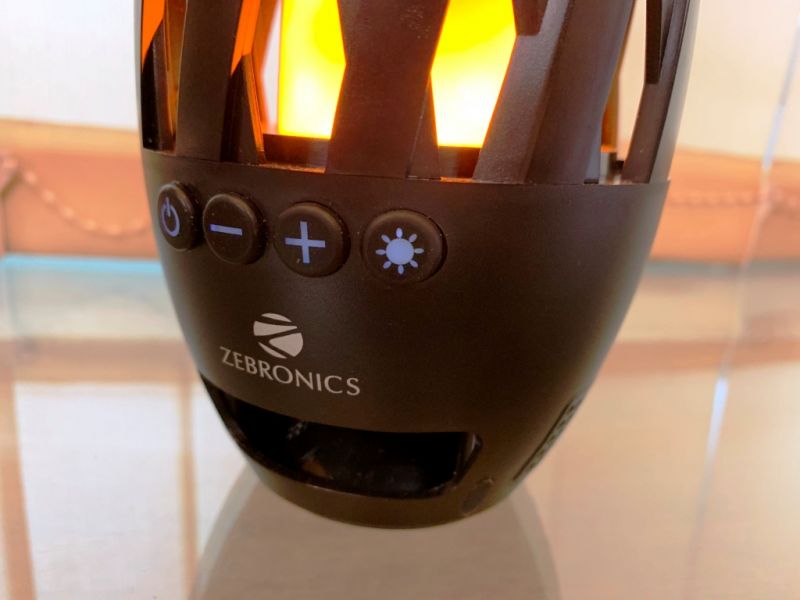 Towards the bottom rests the speaker housing, which has dual openings towards the front and back and a plastic mesh towards the sides. The partially open design for the speaker housing is polarising — we would have preferred either an all-around mesh design or an open vent design. The speaker sadly doesn’t accompany a microphone, which is why you couldn’t take calls. Nonetheless, the design isn’t bothersome and you would eventually gel well with it. 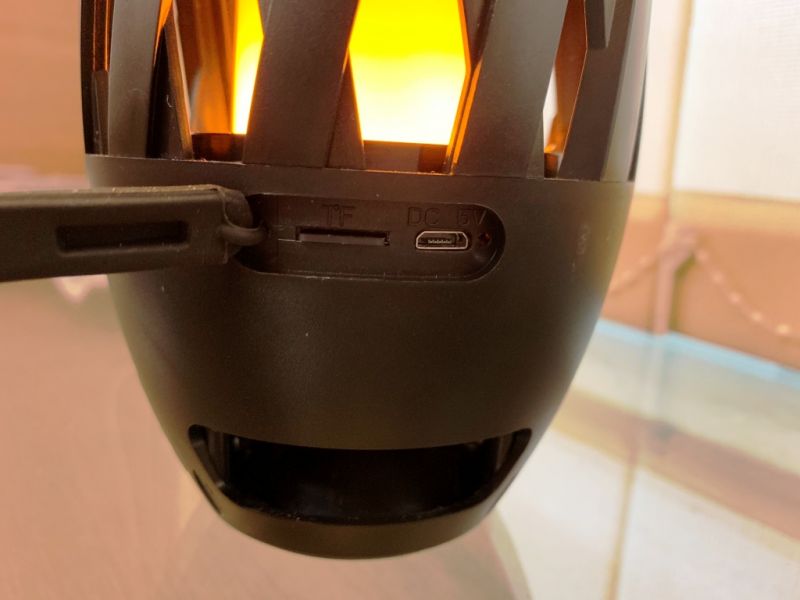 The Atom is primarily a decoration lamp, consisting of 60 LEDs that glow orange. The LEDs glow in a fashion that resembles a burning candle’s flame. In fact, we kept the Atom on our shelves and there was hardly anyone in our office who wasn’t fascinated by the lights. Sadly, there’s no way to control the brightness levels or change the pattern. We also wished that Zebronics had provided a way to change the colours and the lighting effects. Nonetheless, the Atom makes for a stunning desk or cupboard companion with its unique light show and this alone makes it to the ‘wants list’. 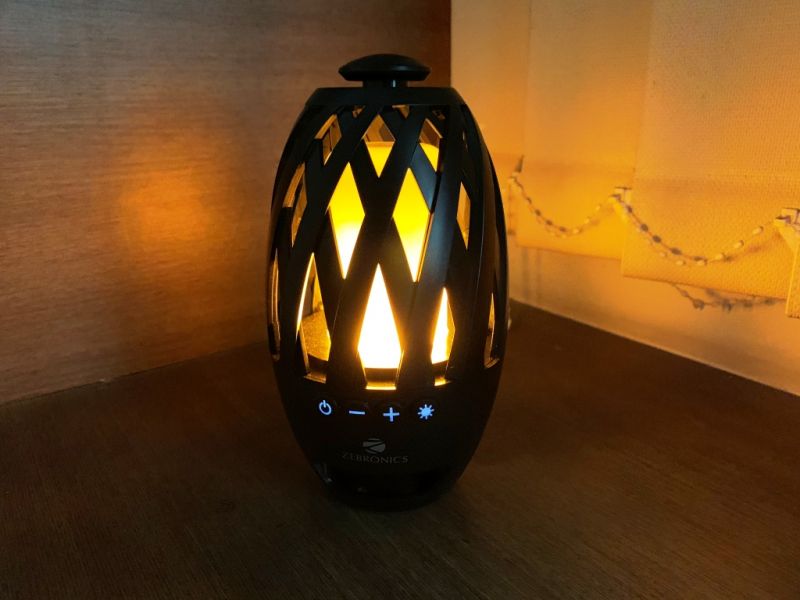 However, Zebronics also markets this as a wireless speaker. There’s a tiny 3W speaker with a 50mm driver that belts out audio between 100Hz to 20kHz. For what it contains, the Atom puts out a below-average audio performance. The speaker lacks bass and other frequencies appear to be flat — it’s difficult to make out the difference between the lower and the higher frequencies. However, since the Atom is not primarily an audio gear, audiophiles should preferably stay away from this one. This, at best, can be used to play ambient music or keep playing devotional tunes in the mornings — it’s best used as a speaker for playing soft melodies.

However, the Atom does what it’s intended to without asking for refills frequently. Zebronics hasn’t mentioned the capacity of the battery, but the Atom can do audio playback comfortably up to 3 hours. The lamp mode can stretch the battery stamina almost up to 4-5 hours with ease. If the Atom runs out of breath, plug it to a micro USB charger and it rejuvenates within 3 hours. 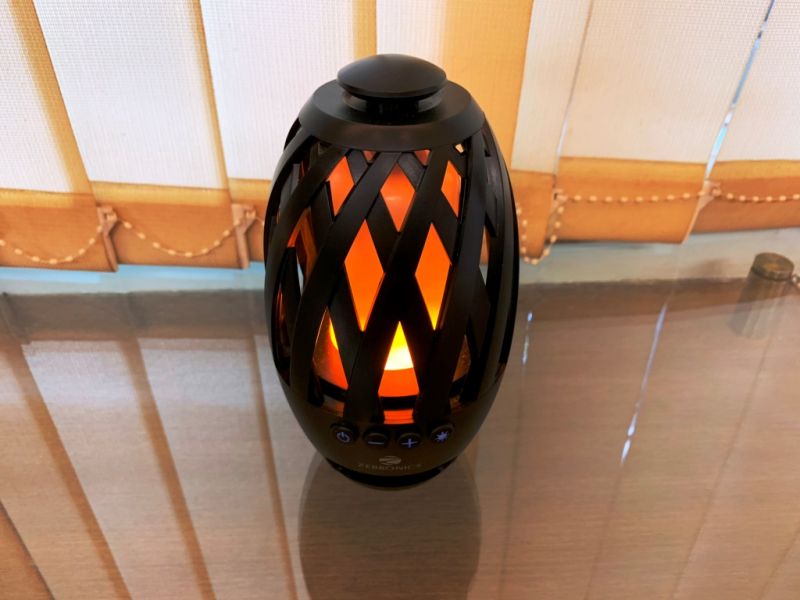 So how does the Zeb-Atom fare? As a home decorative piece, it impresses with its candlelight effects and therefore, makes for a fancy gifting item this festive season. However, the speaker isn’t half as impressive as the LED lamp and it at best suitable for playing melodies in the background. Therefore, at Rs 1,699, the Atom will appeal only to those who want something unique sitting on their tables or shelves that occasionally functions as a wireless speaker.