The Soulfit Sonic V08 is one of the best concepts we have seen, in the wearable category, in a while.
Rating:

Smart wearables are dime a dozen in the market these days. You have got the latest and best from one of the spectrum in the form of Apple’s Watch, whereas there are a bunch of functional ones available for dirt cheap prices from brands such as Xiaomi and others. Most of them, apart from the new Apple/Android stables basically do the same, albeit in different forms and function — track steps and heart rate, show notifications and act as a controller for your smartphone, and so on. The ones that qualify as health bands simply constrain themselves to the basics.

However, Soulfit believes that health bands can actually be more than simply a tracker resting on your wrist all day. This is why their Sonic V08 health band doubles up as a Bluetooth earpiece for taking calls on the move. Yes, a health band that can do all the usual tracking stuff and also receive calls when required. You can get one for Rs 9,999 — a price that pushes it pretty much into the Fitbit territory. However, the tiny form factor and the dual-device function does deserve some raised eyebrows. Therefore, does it justify itself as being good at both the functionalities of a health band as well as a Bluetooth earpiece? 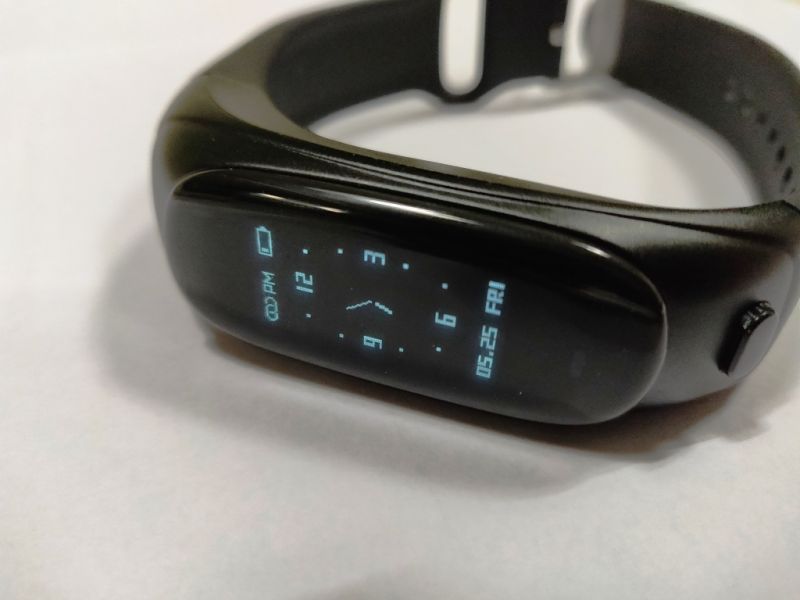 The Sonic V08 looks like any other health tracker at first glance. There’s a pebble-shaped tracker unit sitting neatly into the strap. The tracker houses a 0.96-inch OLED display with a touch button below it, which is the sole medium of interaction. There’s also a physical button or release mechanism on the strap, which releases the tracker from the strap when you need to use it as a Bluetooth earpiece. 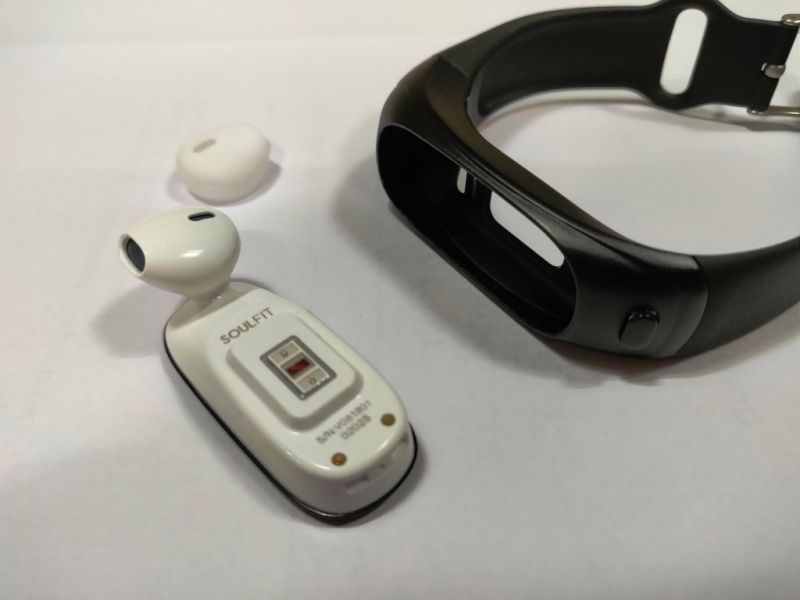 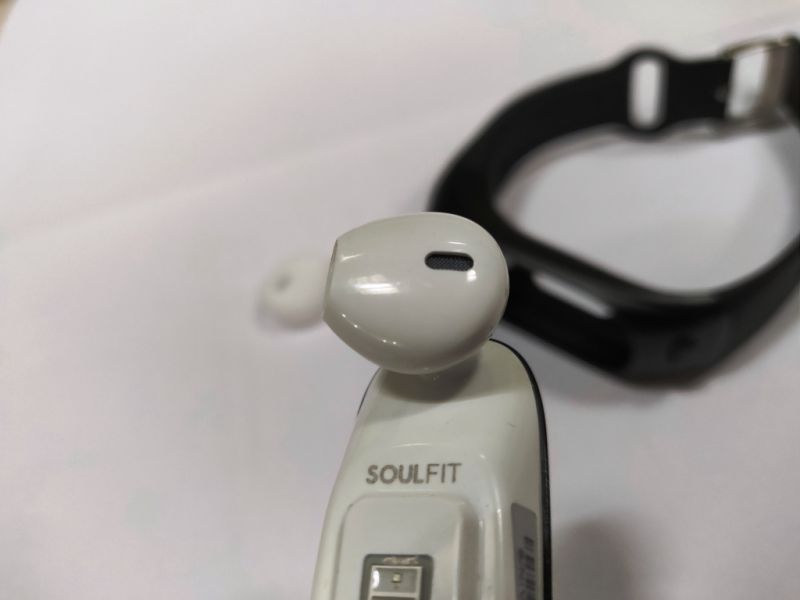 The earpiece is designed for the right ear only and does not turn around the other way. This, indirectly means that the tracker is meant or designed by the company for those who will wear it on the left hand. The company should think about those users who prefer using a health band on their right too. The earbud resembles Apple’s EarPods with the design almost identical to the bud. Soulfit also bundles along two silicon ear tips meant to increase the comfort while wearing (and keep the tracker intact within the strap — more on that later). The strap comprises entirely of rubber, and the tracker slot is made from plastic — all of it ensures an irritation-free wear experience. Lastly, the tracker is made of durable plastic too, but does not feature water-resistance. Probably a huge drawback for a fitness band, but since this has a Bluetooth earphone functionality which forces it to lose out on the IPX rating. 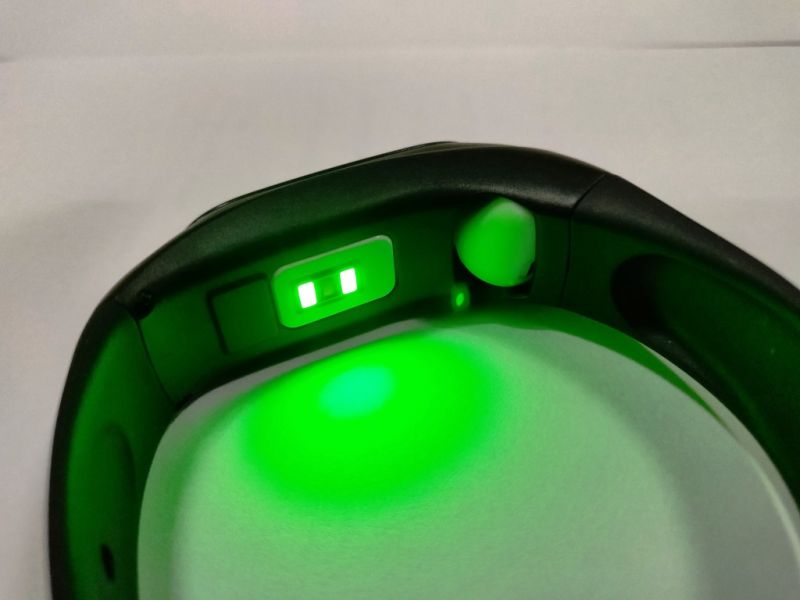 The Sonic V08 sports a Nordic 52832 processor that powers a KX023-1025 sensor. For tracking the heart rate and blood pressure, there’s an Osram SFH7070 optical sensor placed at the bottom of the tracker. The Sonic V08 can track steps, calories, heart rate, blood pressure, sleep and features additional basic functions such as notifications, alerts, alarms and a few more.

For the tracker part, it works well — the tracking is mostly accurate. Like most other fitness trackers, you can tap on the touch button and go to the desired tracking mode for manually tracking the data for the heart rate and blood pressure. The steps and calories are tracked on their own. However, you can also set up the tracker to keep a tab on the heart rate and notify you if there’s a sudden bump in the readings. For that, you will have to install the H Band 2.0 app on your smartphone. This feature will monitor your heartbeat continuously and periodically to ensure you are alerted accordingly, but will sacrifice on battery life in the bargain. The H Band 2.0 app is necessary to connect the band to your smartphone and record all vital data. 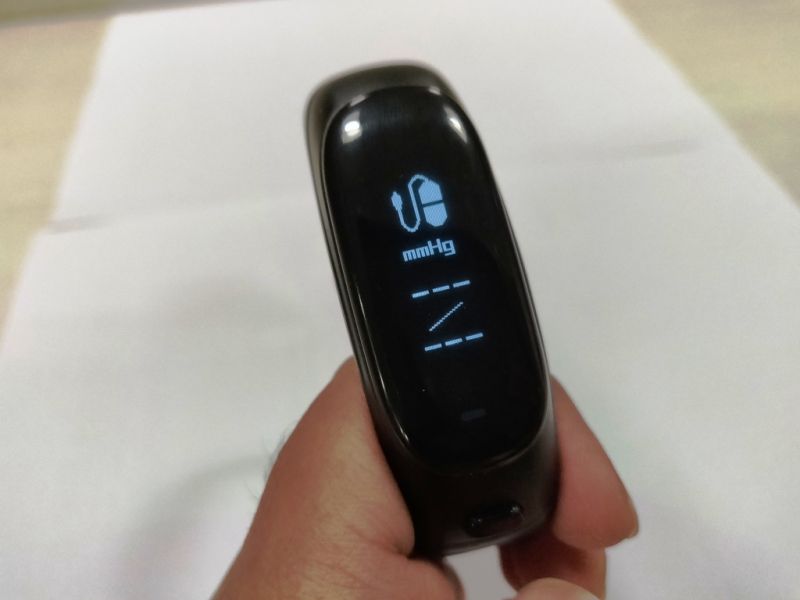 Connectivity was a bit of a trouble. We found the manual connection setup a bit annoying, considering that most other fitness bands connect to smartphones once the Bluetooth has been switched on. Nonetheless, the H Band 2.0 app provides the user with a lot of options to tinker around with various parameters, such as setup auto heart rate and blood pressure tracking, alarms and even locate the smartphone. One can even choose from three watch faces for the puny display, which is a nice touch. It’s also surprising that the 0.98-inch display manages to show content from supported apps and messages very well. There’s also a camera mode in the app that allows the band to act as a remote Bluetooth shutter button for snapping photos without shakes — a feature that was very interesting and well thought of. 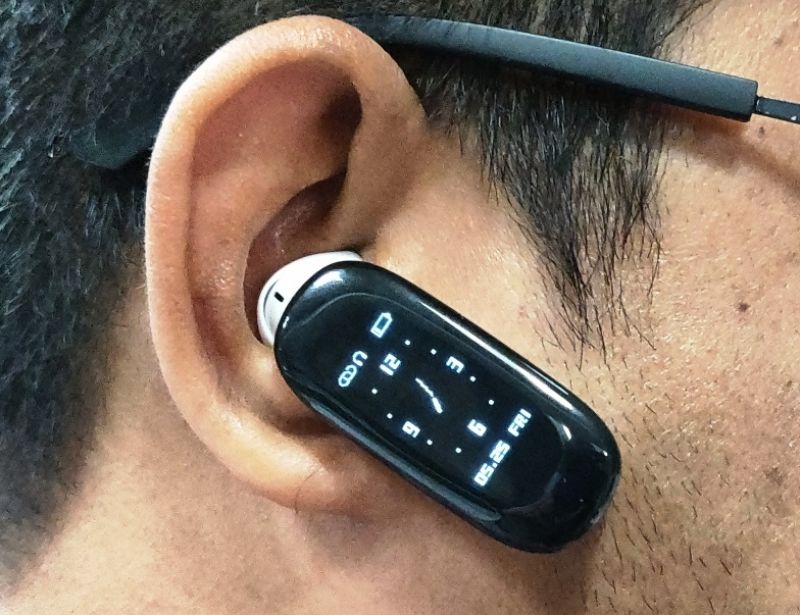 However, when you consider the earpiece part, you will find the Sonic V08 very useful — simply plug out the tracker when a call comes in and use it as a Bluetooth receiver.

The weight of the earpiece is well balanced, ensuring a comfortable fit. To receive a call, simply press the release mechanism's button, and the tracker pops out of the strap. Put it in your ear to take the call — no need to press any buttons for answering as the tracker senses that you have removed it from the strap and automatically answers the call. As for disconnecting, you simply place it back into the strap and the call disconnects.

The tracker, when in Bluetooth earphone mode, can either playback music or answer calls. There are absolutely no controls on the unit for answering or disconnecting the call or to even increase the volume or changing tracks. Everything needs to be done from the smartphone itself. As for calls, the touch sensor will allow receiving the call, but not hang up. The strap's slot has a low-powered magnet on one end and the tracker has a magnetic sensor which helps in answering or disconnecting a call. It would have been nice if the tracker could use the touch sensor with a series of gestures to help with volume, track, pause/play and alike.

The audio quality is very good for calls and basic music playback; however, there’s noticeable distortion at higher volume. the microphone's sensitivity is also very good and voice calls are absolutely no problems. However, when in a noisy area, the microphone also picks up the ambient sound, causing a disturbance to the person on the other end of the call. Lastly, as for music, the audio quality is average but not as enjoyable as you would find on stereo headphones. In short, this tracker is not meant for music but has a USP only meant for phone calls. 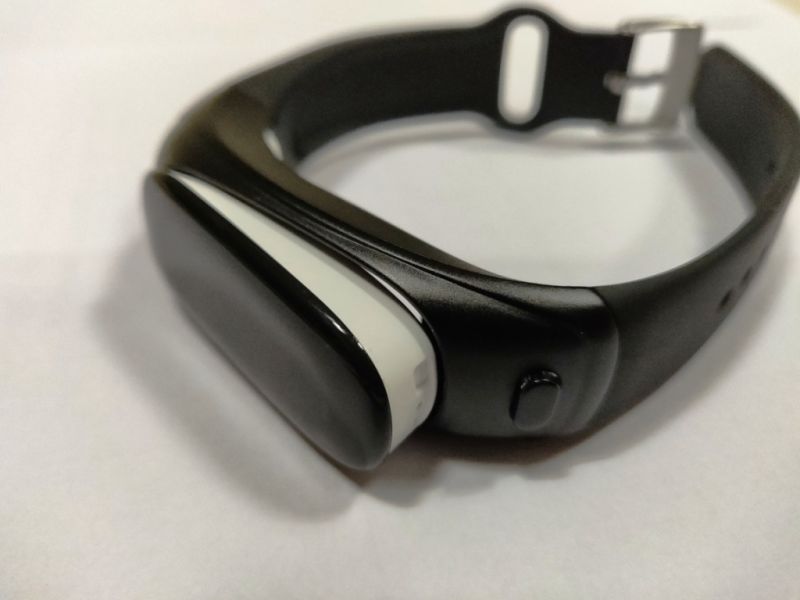 Though the tracker's functionality has this brilliant feature, raising our expectations from all health trackers from other established manufacturers, there's not all good here. What seems to be the main USP of the Sonic V08 is possibly one of its biggest drawbacks, almost. The tracker's release mechanism has a slight design flaw. The release button is prone to accidental bumps and brushes when in a crowded area, thereby accidentally releasing the tracker from the slot even when you don’t need it. As a result, there have been multiple moments when we almost lost the tracker while outdoors. At first use, we did not need the silicone ear tips as we preferred using it similar to how Apple's earphones are used. Not using the silicon eartip makes the tracker unit fit loosely into the strap, and if your release button is accidentally pressed, the tracker will definitely fall off without the user knowing it. In order to keep the tracker from falling off, even if the release mechanism is accidentally triggered, the user will have to use the silicon ear tips to ensure a snug fit into the strap and prevent it from falling. The eartip will also give you a snug fit when in the ear canal apart from adding to the grip when being used. Soulfit should work on a robust release mechanism, ensuring that the tracker only comes out of the slot when the user demands. Lastly, the release mechanism is made from plastic, which could see a wear and tear earlier than usual as this tracker will also continuously be used as a earphone. While we noticed that when new, the tracker snaps in well, but over time, we could see the plastic notch that holds the tracker in, possibly wearing off. Soulfit claims that the product has been tested for such conditions and assured us that the release mechanism will not fail or wear off as easily as we thought. However, we have been using the device since two weeks and aren't as sure till further exhaustive use of the tracker.

Keeping aside the release mechanism design issue, the tracker is a great gadget as an overall. The one area where Soulfit has nailed it is the battery. This being a continuously tracking health band-cum-Bluetooth earpiece, the battery life on the Soulfit is decently good. On an average, the Sonic V08 managed to last for up to three days, where we kept it connected to our smartphone and attended most of the calls using the earpiece, while the device additionally did the job of health tracking. And when it comes to charging the device, the Sonic V08 thankfully doesn’t sport any micro USB port or a power jack — there’s a charging dock that uses POGO pins to charge the onboard battery, similar to the Pebble or Mi Band. 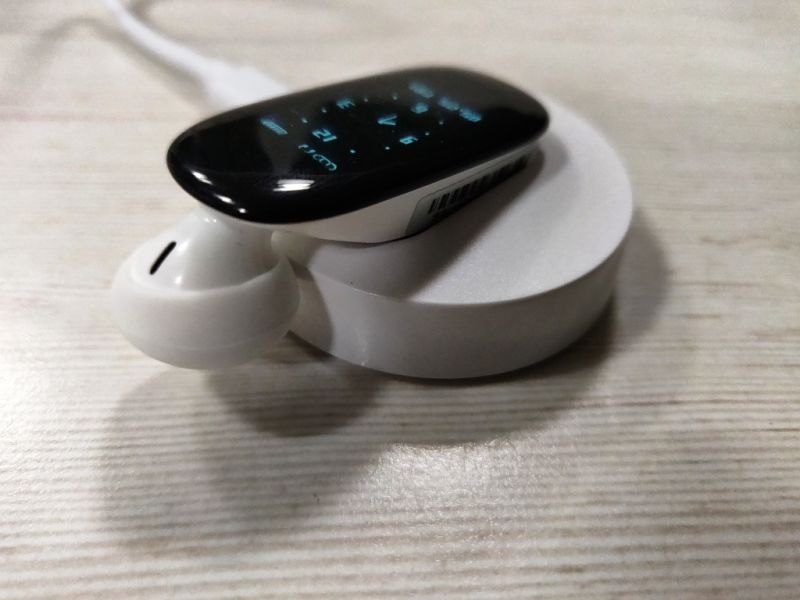 The Soulfit Sonic V08 is one of the best concepts we have seen, in the wearable category, in a while. The convenience of a health tracker fused into a Bluetooth earpiece makes it one of the most exciting products in its category. It’s smart as well — it shows notifications and provides convenient ways to interact with your smartphone (summoning the voice assistants). However, the tracker release mechanism is easily its biggest weakness, requiring Soulfit to polish up on the design.

Nonetheless, if you are looking for a fitness tracker that does more than simply track/record your health data, then the Soulfit Sonic V08 is definitely a must buy.