The only strike against it is the lack of waterproofing and the below average build quality.
Rating:

From bulky designs and unreliable connections, Bluetooth speakers have come a very long way in the past few years. Now, for a fairly reasonable price, you can roam around with a rich, bass-heavy, high pitched sound that can easily fit in your bag, and connect to your smartphone with ease. However, in the pursuit of compact and portable wireless Bluetooth speakers, something is left behind — the stereo effect. Since music tracks are usually made with stereo to multi-channel audio, you need a right speaker system to make sure that effect is felt. As for simple audio speaker setups, in order to maintain a good equilibrium and balance between the left and right speaker, a single speaker can leave out the important element to the track.

The iBall Musi Duet W9 goes all out to bring that stereo effect in place. It packs stereo sound into its wireless Bluetooth speaker pair, all in a well-designed and small package. The Musi Duet W9 boasts of 360-degree audio and True Wireless Stereo speakers. With the label of Rs 4,999, let’s see if the W9 manages to deliver audio that is good enough to justify this price.

There isn’t much to talk about the design. The W9 keeps it simple — just like most Bluetooth speakers these days. It features a cylindrical shape with rubber edges and a fabric-covered body. The cylindrical design means that sound is pushed out in all directions. 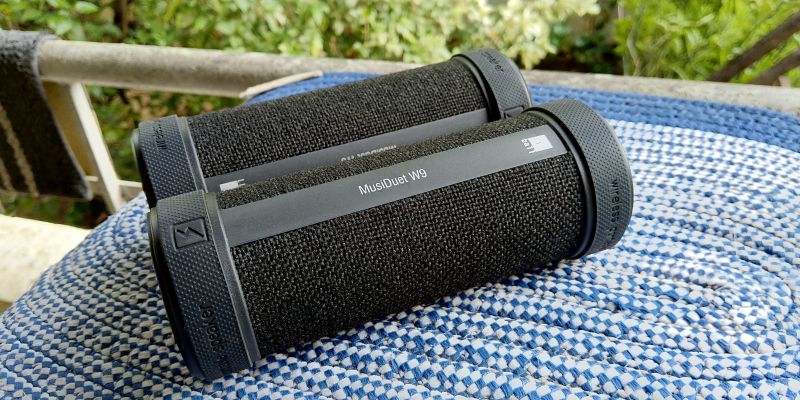 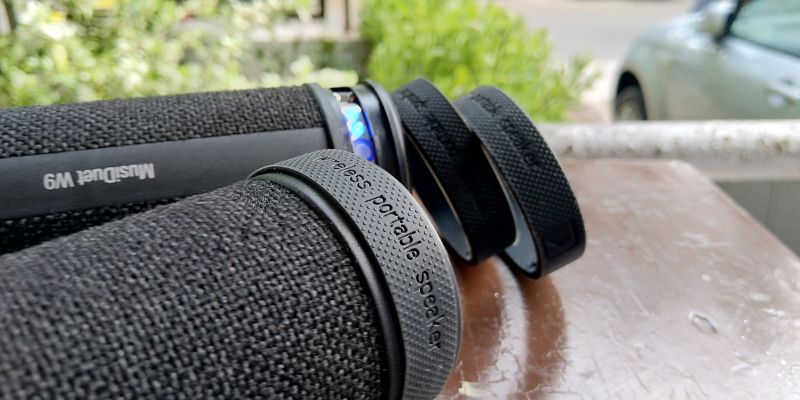 It comes wrapped in a tough mesh fabric housing the drivers and capped with a rubberised end on the top and bottom panels. The speakers definitely look and feel pretty rugged; however, in terms of build quality, the speakers have a below average outer shell. The plastics seem a bit low on quality, and the rubber borders lack the finishing touches. The rubber ends also look like they are wheels for the cylindrical shape where the speaker is free to roll around when kept horizontally. However, the rubber ends do help cushion the speakers during accidental falls, apart from providing a little grip on the surface kept. Nevertheless, the rubber rings are removable easily, which can be considered washable, but has no use if it is removed. The rubber rings also double up to protect the inboard USB port, line in port, the switches and the LEDs. The speakers are not waterproof or splash resistant in anyways. The fabric is non-removable, and you may find it tough to get it cleaned if you manage to get it dirty. Using a brush to remove settled dirt could help a bit. 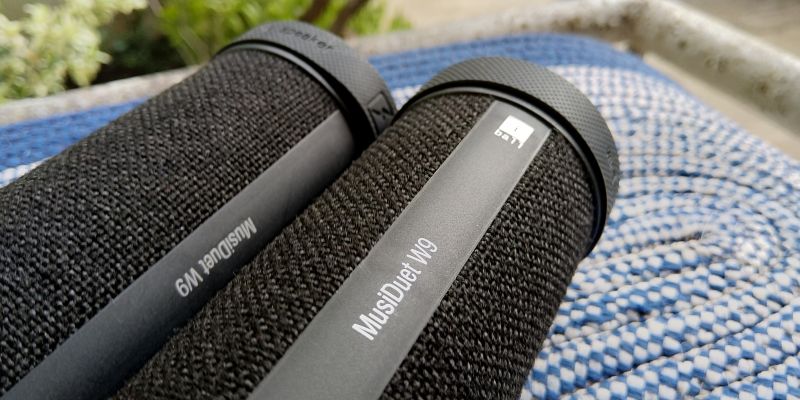 The W9 is designed to sit horizontally or vertically, though it seems better suited to being propped up vertically. The speaker easily fits in the palm, so carrying it around isn’t a problem too; and it’s fairly light at just 437g each. The speakers are easy enough to stow in a backpack and are small enough to easily tote out to the beach — but can get equally dirty quickly. Each speaker measures about 18.2cm in height and 7cm in diameter. 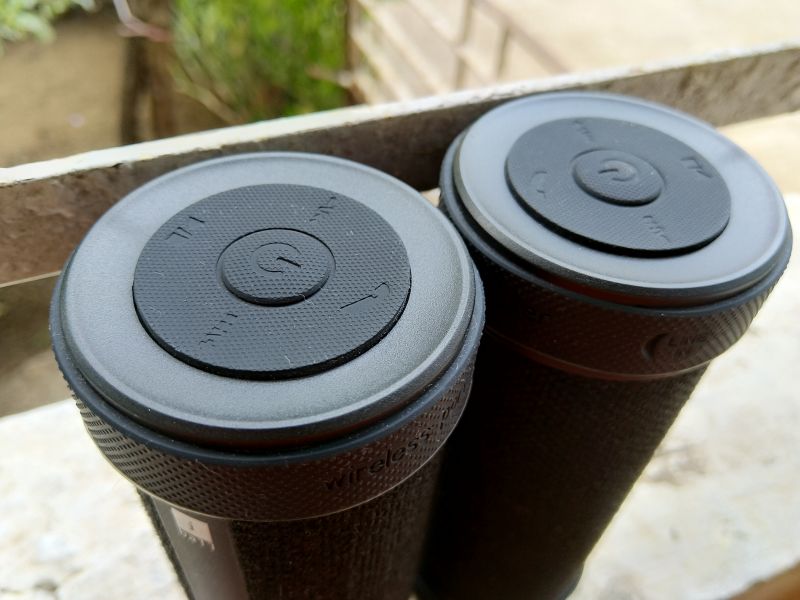 On top, you'll find rubber-enclosed AVRCP media buttons (control panel) for managing the music, which includes volume, skip tracks, play/pause, and call controls. You can also answer and end calls with the discrete speakerphone button. Sadly, the buttons are not well marked and makes it difficult to find out which button is for which when you are using it in the dark or in low light environments. iBall should take note of this simple requirement.

As mentioned earlier, there’s a rubber flap which protects the auxiliary input and the two USB ports.

A battery LED lights up when the speaker is charging your smartphone — yes, the speakers also contain a 4000mAh battery each and double up as a power bank to charge external USB devices such as media players and smartphones. Additional LEDs indicate the Bluetooth and power status are also present. Lastly, each speaker has a steel pop-out handle on the bottom that allows you to hang the speaker wherever needed or to carry it along in a backpack or alike. 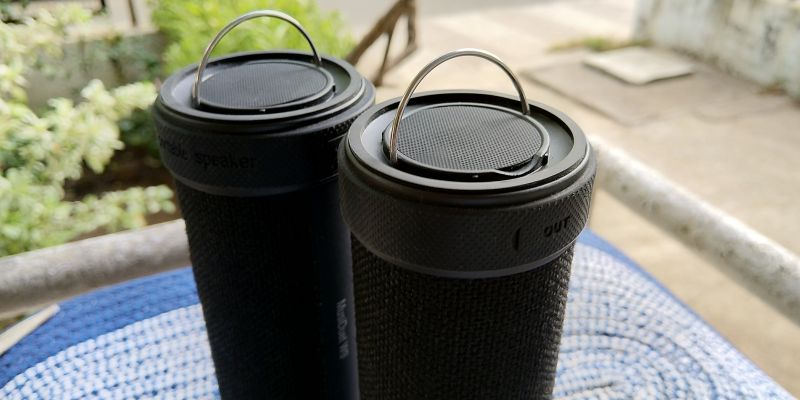 The Musi Duet W9 is driven by two 8mm drivers that push a total of 16W RMS (rated). There are two passive radiators in each speaker to enhance the bass output.

The speakers manage to deliver an above-average audio quality, even at maximum volume levels. However, the W9 can get really loud — with the volume at max levels on the speaker side, we were easily able to fill a small or a mid-sized room. However, the lows weren't as pronounced as expected. Bass isn't deep enough, but when you crank up the volume too high, it doesn't distort or ruin the overall audio, which some speakers tend to do otherwise. The speakers delivered sharp and legible vocals with well-balanced mids. The W9 plays well indoors but does not shine as well outdoors or in large and open spaces.

The speakers also fare well when using it while watching videos. As mentioned earlier, the balanced audio output helps with movies and alike. And same is the case with smartphone audio calls. 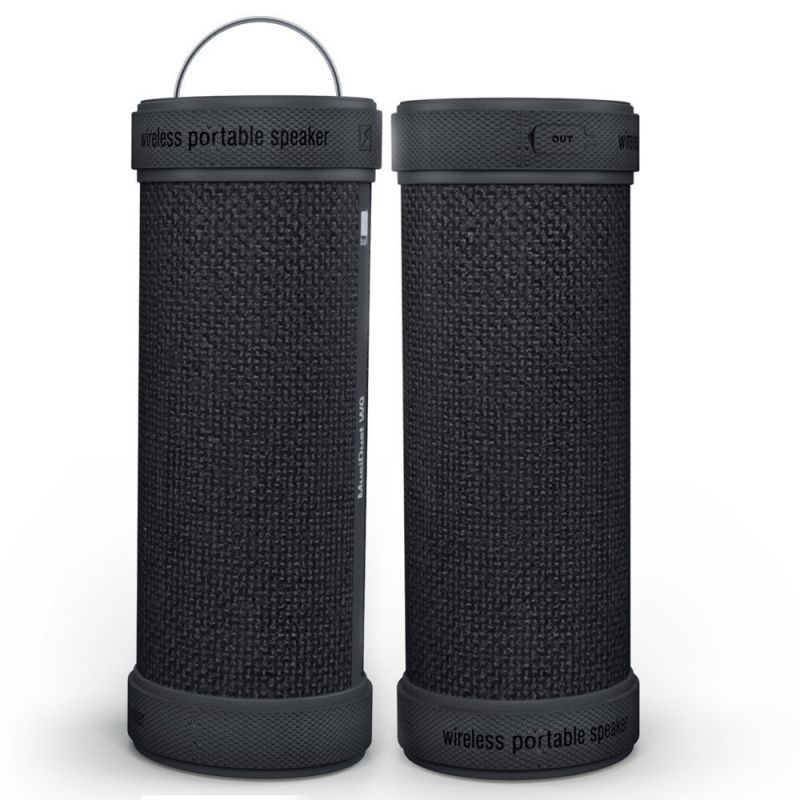 The Bluetooth connectivity is well taken care of too — we did not face any sync, drop or range issues. While each speaker can be individually used as a single unit or can be paired together for a stereo effect. In short, the speakers can be used by two separate individuals or can be brought together for a stereo effect. Pairing the two speakers is pretty simple and straightforward. They pair automatically together when kept in the vicinity and enabled in pairing mode. Once paired, and connected to a smartphone or Bluetooth-enabled device, they act as a left and right speaker (stereo setup) automatically. When they pair up with each other, an audible tone alerts you that they have successfully paired. Sadly, you will not know which acts as the left and right speaker respectively. An AI voice or a physical marking on each speaker could have helped here, similar to how wireless earbuds operate. 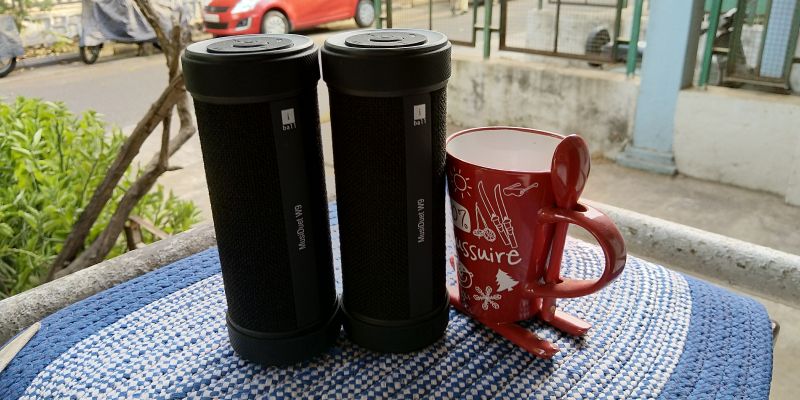 The runtime of the internal battery on the W9 is good enough. iBall claims that the Musi Duet W9 lasts up to 15 hours on a single charge, which is pretty much accurate when we tested it. You probably aren't going to use it for as long in a single stretch. We managed to get at least a week of battery on a single charge, and with an average use of around 2 hours each day. However, this would reduce if you are using the speakers to charge your phone too. You can simultaneously charge the phone while playing music too. Four LEDs on the speaker mark the amount of battery remaining on your speaker, with 25 per cent battery denoted by each LED. Sadly, the LEDs are covered by the rubber enclosure, which is not visible easily from the outside. The translucent rubber isn't helpful enough. Lastly, each speaker takes about six hours to completely top up the internal battery. This could depend on the type of charger being used. 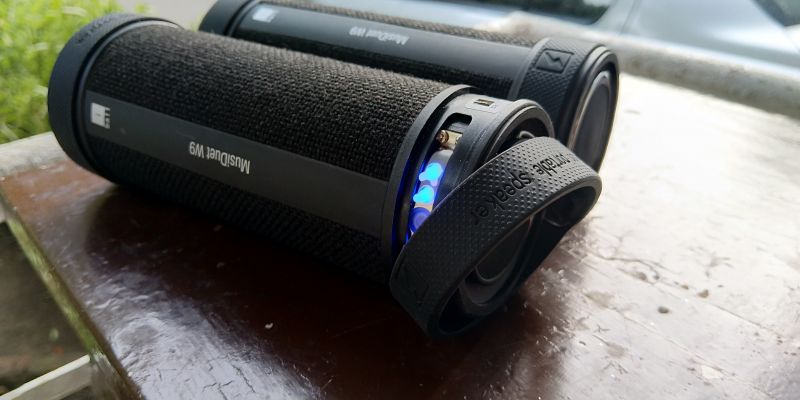 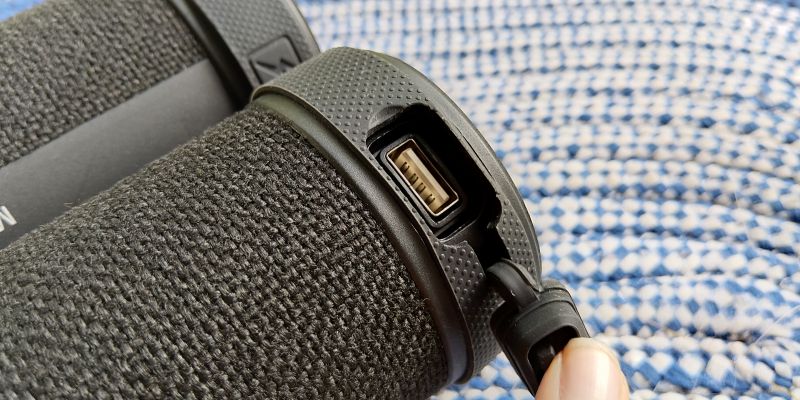 The iBall Musi Duet W9 definitely sounds good and is impressively loud for its size. However, the speakers fall short in delivering good bass, but we cannot complain much here. If you're looking for a portable speaker with a good battery life, to tote with you on a trip or just to jam around the house, the Musi Duet W9 is a good bet. For Rs 4,999, it's a reasonable deal, considering you get two Bluetooth speakers bundled in a single package. The only strike against it is the lack of waterproofing and the below average build quality.

— With inputs from Francis D'Sa, Editor