the RDP ThinBook 1110 is a good backpack companion that can become your media consumption device while travelling and a simple laptop while writing small documents or emails on the move.
Rating:

As technology becomes an indispensable part of our lives, the demand for smarter devices associated with us 24x7 has risen. Smartphones have revolutionised the way we look and deal with the world around us. However, there’s a limit to what smartphones can offer, after which computers finally take over — handling tedious tasks such as typing lengthy documents or editing photos and more. With mobile computing getting smarter by the day, the PC’s role has now been reduced to limited activities. Since that’s bad for business, PC manufacturers often keep coming up with tempting ‘modern computing’ devices that tend to cater to both, i.e. tablets running the usual PC-OS Windows 10 or a convertible device that offers both the conveniences of a laptop and a modern-day tablet.

If you want the conveniences modern computing to be a part of your life, then big names such as Dell and HP will sell you convertibles, but at a premium. What if your budget is limited — extremely limited — to that of a mid-range smartphone? A Bengaluru-based startup going by the name of RDP has offered some devices that cater to the ultra-budget seeker. They make a range of ultra-affordable Windows laptops and the most premium of their offerings is the ThinBook 1110. For just Rs 13,999, the device offers a Windows 10 tablet with a permanently attached foldable keyboard. However, the lower price tag also means a dip on the specifications chart. Is the RDP ThinBook 1110 worth an option?

A budget device usually garners lower expectations in the build department. With the ThinBook 1110 though, RDP has managed to strike a balance — the ThinBook 1110 doesn’t feel cheap. The laptop features an all-plastic chassis, which ensures a lighter weight but brings in certain rough edges here and there. The tablet part has an all-glass surface (a necessity for a Windows-powered tablet) with an 11.6-inch touchscreen display. The display is connected to the keyboard base via 360-degree rotating hinges. The keyboard is decently sized, with a well-spaced key layout, but lacks a numeric pad. The moderately sized trackpad supports Windows Precision Touchpad, which means one can exercise all the trackpad gestures that Windows 10 offers. 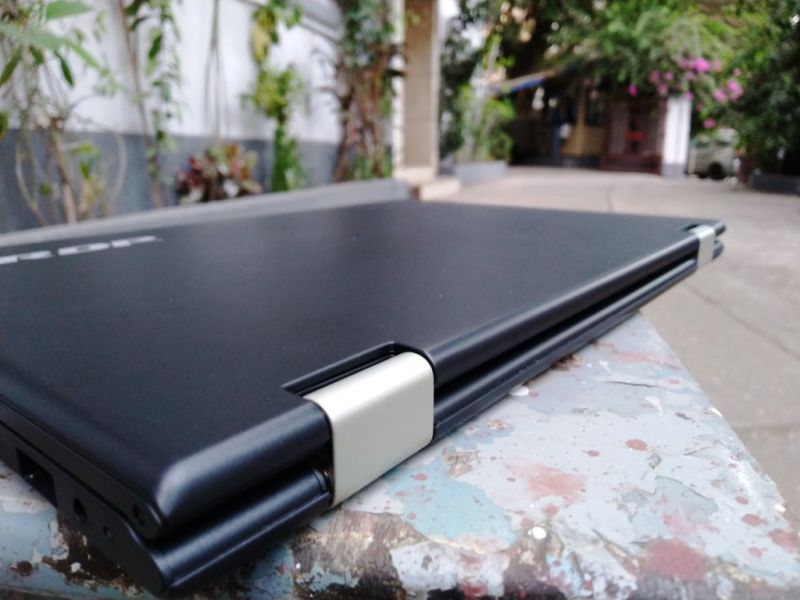 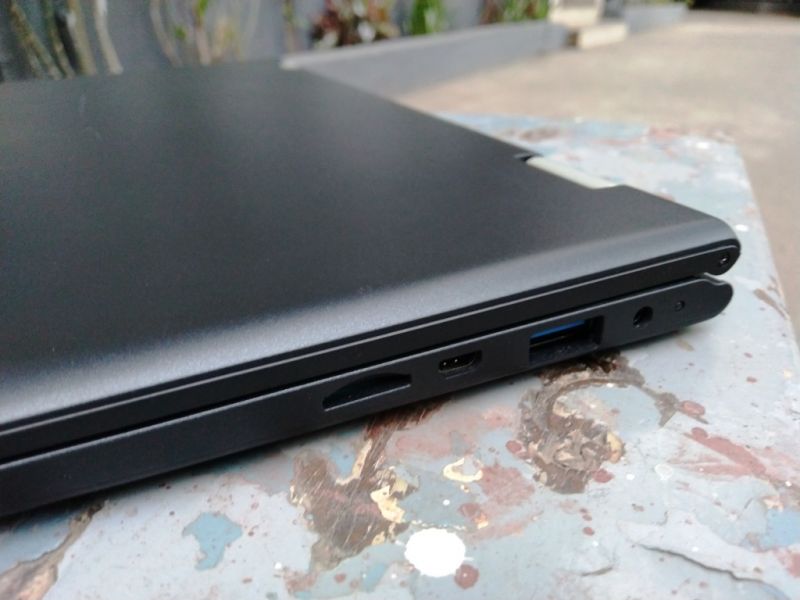 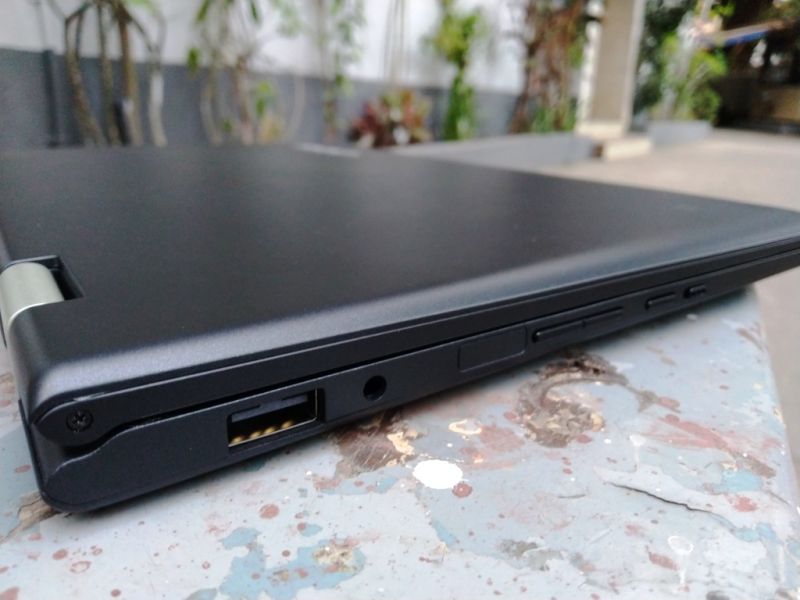 The ThinBook 1110 has a fan-less design, so it can be reduced in size. There are two regular USB ports, a mini HDMI port, a 3.5mm headphone jack and a micro SD card slot (one that’s of prime importance). Since it also functions as a tablet, there are volume rocker keys as well as a power/lock button, like the one you get on a smartphone. There’s also a slider switch to disable the keyboard while switching to the tablet mode — great for those accidental keystrokes or touchpad gestures. However, the keyboard is disabled automatically once you switch to the tablet mode anyways. 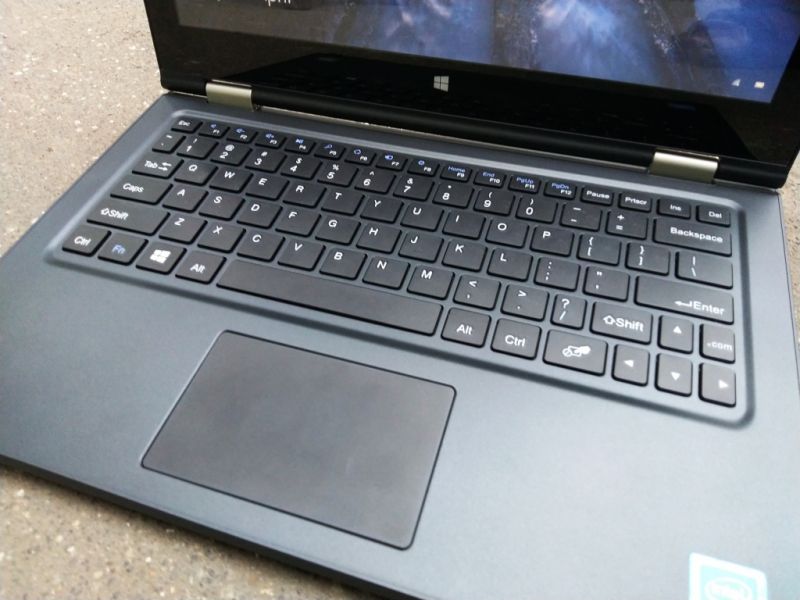 At 1.32kg, it’s light enough to throw it in your backpack for the weekend trip. The laptop utilises a 5V adapter for charging the internal battery. The hinges, however, are a tad firm and require considerable efforts for transitioning it from the laptop to tablet mode. The big touchscreen display also puts noticeable weight on the lid, which restricts its amount of lean angle while using it in the laptop mode.

Since this is a convertible, the display has dual roles to play. It’s an 11.6-inch touchscreen display that renders pictures at a resolution of 1366 x 768. When using it as a laptop, the display’s extremely narrow viewing angles are clearly visible, i.e. binge-watching on YouTube will be fun only in solo, not with a group of three. The dynamic range is pretty average and contrasts are decent. 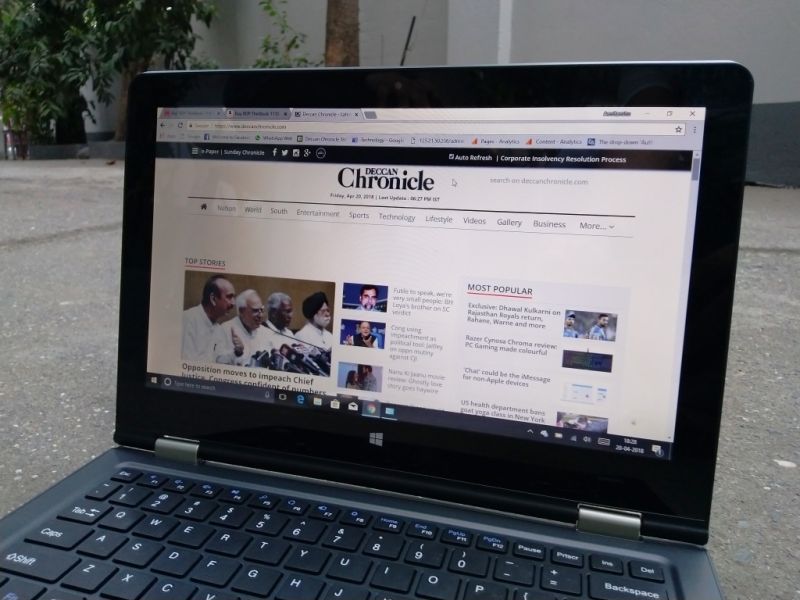 Switch to the tablet mode and it becomes easier to wade through the Windows interface — thanks to the touchscreen display. The touch sensitivity is surprisingly good for a device in this price range. Swiping through folders and using other Windows 10 touch gestures on this device is remarkable. The capacitive Windows key at the bottom is useful for summoning the Start menu from any application. And thanks to the keyboard, it’s convenient to watch movies in the tablet mode as the keyboard doubles up as a stand.

The ThinBook 1110 is built around a 1.44GHz 64-bit Intel Atom x5-Z8350 processor paired along with 2GB of RAM and 32GB of onboard flash storage. There’s an Intel HD Graphics 400GPU taking care of the graphics. It runs on a 32-bit version of Windows 10 Home. The storage is expandable up to 128GB via a micro SD card. At first glance then, it seems to be an accumulation of yesteryear’s technology to fit in the stringent price bracket. 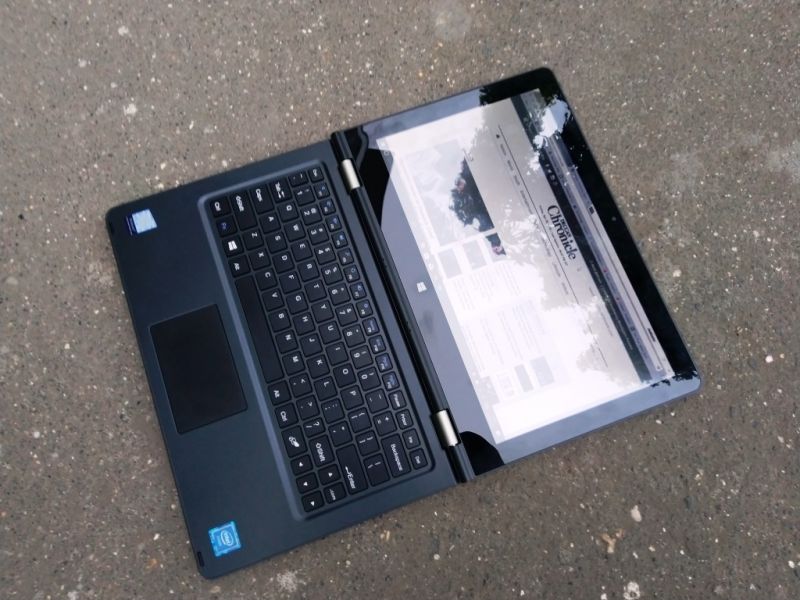 However, you need to consider that the ThinBook 1110 is meant to be used as a multimedia device rather than a productivity-focused Windows laptop. When you keep that in mind while using it, the ThinBook 1110 comes across a surprisingly snappy device. In the laptop mode, it’s reasonably swift to navigate through files and folders as well as browse the Internet with a maximum of 3-4 tabs opened at once. Use a second browser or any other resource-intensive legacy Windows application and you are bound to experience stutters or random freezes — that’s as much as 2GB of RAM can handle.

The limited-inbuilt storage of 32GB also means that the primary partition fills up pretty fast, especially after a seasonal Windows 10 update. Therefore, installing too many applications or storing movies isn’t a good idea. RDP could have considered 128GB of storage as 32GB isn’t even adequate for smartphones these days. However, thanks to the microSD card and USB ports, you can store your extras outside.

Typing medium-sized documents on this one is fairly comfortable, although, a lot of key ghosting is bound to take place considering smaller confines of the compact keyboard. 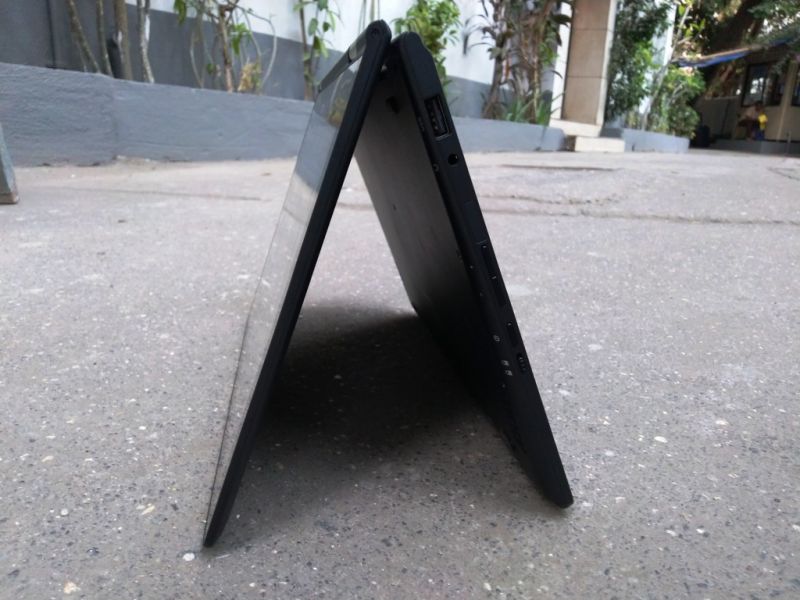 When in the tablet mode, Windows 10 is reasonable fluid here as well. The ThinBook 1110 is at ease while playing UWP games installed from the Windows Store — Asphalt Xtreme is as fun to play as it is on an Android tablet or an iPad. Browsing through photos and other kinds of files is pretty fun too. However, the speakers sound tinny and are good enough only if you are using the laptop in a small closed room. You will need headphones or an external speaker for entertainment.

To sum up the performance, it’s advisable to consider the ThinBook 1110 as an ultra-budget Windows laptop meant to handle tablet-like tasks such as typing documents, watching movies and casual gaming. 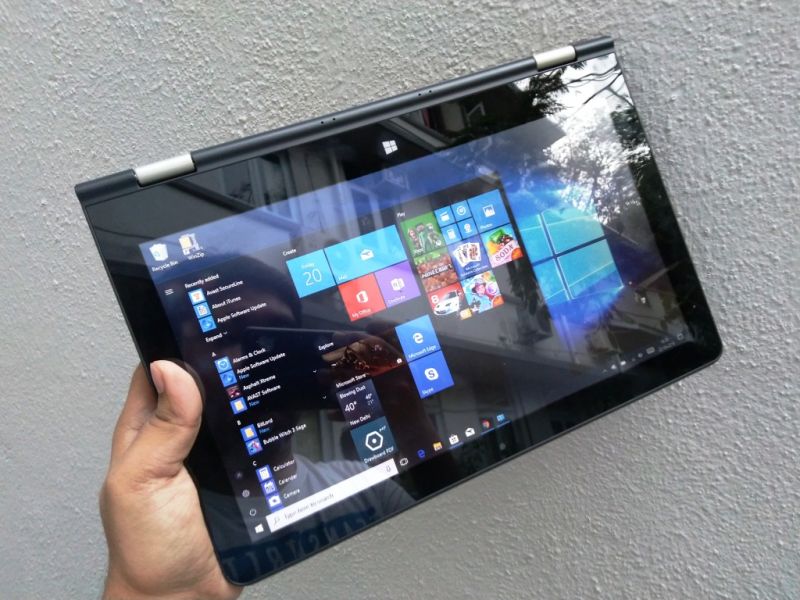 RDP has built in an 8000mAh battery, which is claimed to provide a backup of up to 6.5 hours. In real-world scenarios, the claimed figure of 6.5 hours is achievable, provided the laptop experience with a mixed-usage. While connected to the Internet using multiple applications, the battery life drops considerably to an average of 4.5 hours. However, if you are using it to go through your movies collection one-at-a-day, then the ThinBook 1110 will just about last you through a week, which is impressive for a Windows 10 device.

Is the RDP ThinBook 1110 worth considering? A lot of the answer to that question depends on your requirements. If a highly affordable yet productive Windows 10 laptop is what you’re looking for, then the RDP ThinBook 1110 isn’t an ideal device. This one is meant for those looking for a device that can handle basic computing when required, albeit with the luxuries of a touchscreen display and a full-blown version of Windows 10. It is a good backpack companion that can become your media consumption device while travelling and a simple laptop while writing small documents or emails on the move. There is scope for improvements with the device —more inbuilt storage along with more RAM and a slightly better build quality. However, when you consider the price of Rs 13,999, one can make do with all the issues and consider it as a better alternative to similarly-priced Android tablets.

EV sector relies on China, but geopolitics spurs bus maker to start work on own tech