The ASUS ROG GI503 Strix Hero Edition is a lot of computer for the price its sells – a powerful Core i7 processor, a midrange NVIDIA GPU, fast storage, efficient cooling and a notable display – all of which ensure that the performance isn’t compromised.
Rating:

Gaming laptops are an acquired taste, and nobody knows it better than ASUS. Responsible for some of the most berserk offerings in the market, the company has been trying to carry forward its philosophy of providing hardcore computing power in visually pleasing shells. Not long ago, ASUS unveiled three new models for those looking for a capable gaming notebook at a price that doesn’t forge a hole in their pockets. The ASUS ROG GI503 Strix Hero Edition is one of the new mid-range models that we got our hands on. Warped in an attention-seeking shell, this gaming notebook packs in some serious silicon muscle – a 7th generation Intel Core i7 processor, a 6GB NVIDIA GTX 1060 discrete GPU and a 15.6-inch 120Hz display – all for Rs 1,49,990. Is it a good bet for its price? Let’s dig in.

The ROG Strix Hero Edition commands a premium price tag over laptops that can just make do with enough firepower to cater to a layman’s needs. Therefore, a premium build quality is expected out of the box, which we are happy to say, is delivered. The Hero Edition sports the usual plastic clamshell design found in gaming laptops within the category. It tips the scales at a claimed 2.5Kgs, therefore, making a heavy laptop by any standards.

ASUS, however, has given the Hero Edition a design that is bound to draw eyeballs at an e-sports event. The lid houses sharp creases and corners, along with a subtle vinyl that imparts an image that this notebook can deliver when the flag is waived. As if this wasn’t enough, ASUS went on to include a glowing ‘red’ ROG logo on the lid, which effortlessly makes this laptop cool. However, the only drawback here is that the lid isn’t firm enough.

The interiors are evenly matched to the cool exteriors as well. A full-size QWERTY keyboard with RGB backlighting stares right in front of you. As with most gaming laptops, the backlights can be customised according to one’s taste. The keyboard highlights all the keys relevant to gamers in a subtle fashion.

We loved the placement of directional keys, which is set apart from the other keys. ASUS has also made sure that the audio controls are catered by special buttons on the top – the volume adjusting keys along with the microphone-kill key and a dedicated key for ASUS’ Gaming Centre application is what you get here. The deck also carries the sharp ninja-esque theme from the lid.

The trackpad has a large surface area, which is suitable for navigating through virtual worlds without using multiple clicks. The trackpad is precise and is compatible with all the Windows 10 navigation gestures. However, if you want the full immersive gaming experience, then a dedicated gaming mouse is what we would advise.

A gaming laptop must nail it in the display department and ASUS has done a commendable job for the same with the Strix Hero Edition. There’s a 15.6-inch LCD LED-backlit display that renders pictures at a resolution of 1920x1080 pixels — one would have expected a 4K display, but nevertheless.

The display possesses good dynamic range with impressive contrasts and wide viewing angles. Brightness levels are good as well – it can get very bright in demanding situations and go down to really low levels for use in dark ambient conditions. What rules, however, is the 120Hz refresh rate, which makes for a fluid multimedia experience. So no more stuttering displays that irritate your vision.

As stated, the Strix Hero Edition is a midrange gaming laptop. Therefore, the specifications you get on this one can almost be termed as beastly. Here’s a rundown of what’s inside:

With such capable guts, the ROG Strix Hero Edition has enough firepower to deal with anything you throw at it. Whether it be latest graphics-intensive FPS titles or Internet-based Multiplayer Online Battle Arena (MOBA) games, the Strix Hero Edition can devour it all. We tried out a bunch of modern resource-intensive titles such as Forza Motorsport 6 Apex, Forza Motorsport 7, Need For Speed Payback and Battlefield 1. Most of them ran on ‘High’ settings at a consistent 60 frames per second, which is on par with the performance one can expect from a gaming laptop of this category. Dial up the settings further and you could expect frame drops.

However, when the online battle heats up the internals, the Strix Hero Edition’s cooling system kicks in and makes sure there’s no thermal throttling happening. The laptop is equipped with two independent cooling fans for the CPU and GPU each, along with a custom heat pipe. There’s also a fan Overboost mode to ease out the airflow, which the user can switch on and off on demand (we prefer keeping it in Auto mode). The Overboost mode does create noticeable whizz and switches on most gaming titles.

ASUS has built in some convenient software features here. ASUS’ Gaming Centre is your one-stop shop for all the data about your system’s performance and options to tweak the RGB lighting, presented in a cool graphical interface. Other ASUS pre-loaded applications to tweak audio settings and network traffic management are also present.

However, the audio department on this laptop’s is sad. The ROG Strix Hero Edition despite all its software tweaking bogs down badly in the audio department. The side-firing speakers are just decent enough for YouTube binge-watching. The two 3.5 Watt side-firing speakers aren’t good enough for gaming needs with their dampened and hollow audio quality. It is advisable to external speakers or good headphones for best results.

When it comes to connectivity, the ROG Hero Edition has got you covered. You get most of the ports required to hook it up to other systems in an e-sports event. Check out all the available ports:

We put the laptop on its toes through the 3DMARK RUN and it managed to score a decent figure of 3598. This may not be on par with the usual high-end gaming laptops out there, but you do need to realise that this doesn’t cost a bomb like most of the models with higher scores. However, the Strix Hero Edition also managed to attain a rather average score of 3362 in PCMARK 10, which is not even on par with most gaming laptops. 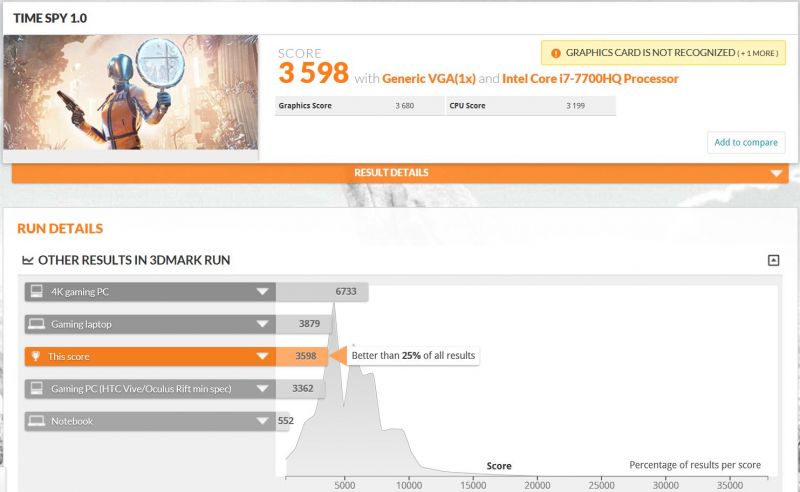 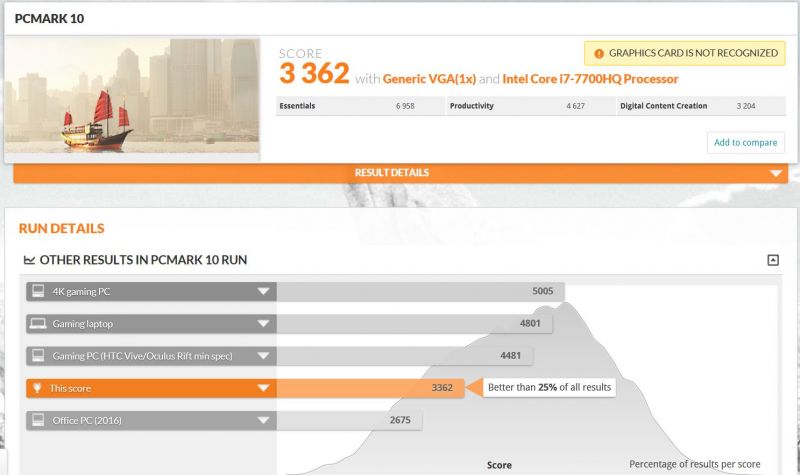 While the ROG Strix Hero Edition is a capable gaming laptop, it also manages to deal with a considerable amount of non-gaming activity with ease. The keyboard has been primarily designed for gaming, therefore, typing long documents on this baby takes some to get used to. The placement for the trackpad is suited to long hours of gaming, but creates a disturbance while typing, often misplacing the cursor. However, one can disable the trackpad to iron out the issue. Bottomline, the ROG Strix Hero Edition is at home with heavy gaming requirements, but shy to serve as a daily driver PC.

Gaming laptops are ashamed of short battery life for focusing primarily on raw performance and that’s the same case with the ROG Strix Hero Edition. On battery power, one can extract a maximum of an hour and a half’s stamina before the battery warning notifications start creeping up. The performance in the battery mode is also restricted to keep a strict vigil on the battery life. Therefore, the only way to play carefree is to keep the laptop plugged into a socket.

The ASUS ROG GI503 Strix Hero Edition is a lot of computer for the price its demands – a powerful Core i7 processor, a midrange NVIDIA GPU, fast storage, efficient cooling and a notable display – all of which ensures no performance compromise. Add to that a tastefully designed body with a beautiful RGB lighting and the cool backlit ROG logo on the lid, and you have got yourself an attention-seeking gaming pod. Of course, a capable gaming laptop like this one sacrifices the practicality of regular laptops and a worrying battery life could pull back the logical buyers. However, if your budget is restricted to Rs 1,50,000 and if you are looking for a stylish, yet potent, gaming laptop, then the ASUS' ROG Strix Hero Edition is one of your best bets.