The PB310 comes dressed in a professional black attire.
Rating:

Over the past few years, power banks have become more of a necessity than a want. While smartphones have been evolving at a rapid pace, the ever-lasting problem still persists — battery life! In 2019, we are finding handsets with monstrous batteries that aim to provide an all-day life; but somehow, we still are left wanting.

Astrum, a brand that has earned a reputation for providing reliable smartphone accessories has been launching power banks which are well received the world over. Now, with our current handsets all featuring wireless charging of the Qi variety, Astrum believes that they have a market that’s worth tapping into. In step, the Astrum PB310 Qi wireless power bank, which as the name suggests is a solution for flagship smartphones from Samsung and Apple. 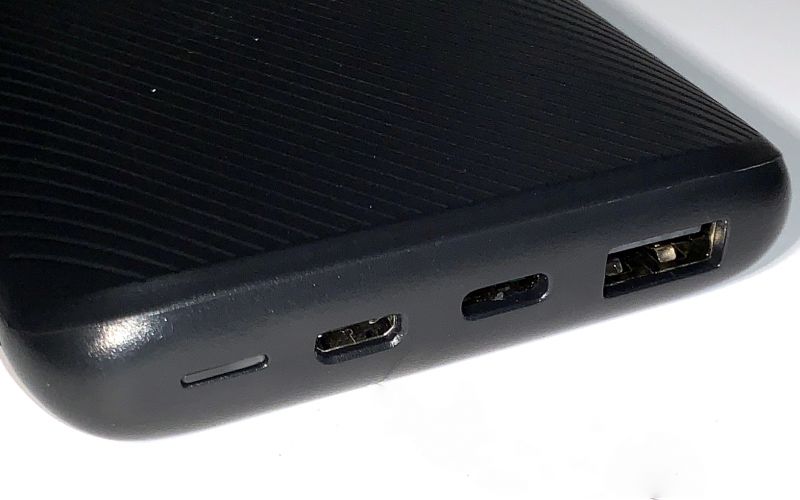 The Astrum PB310 is marketed at the millennial generation as we are some of the most power-hungry consumers in the world. Somehow, an all-day battery just doesn’t last the entire day and we want a solution that can assist us in surviving the day as well as doesn’t burn a searing hole in our pocket.

The Astrum PB310 is dressed in black which is ideal for a professional setting such as an office yet trendy enough for a college-going, student. Featuring a textured design on the face, you see a circular rubberised ring that denotes where your handset needs to be positioned. Thanks to the rubber grip, it helps to keep the smartphone in place so it doesn't slide off. 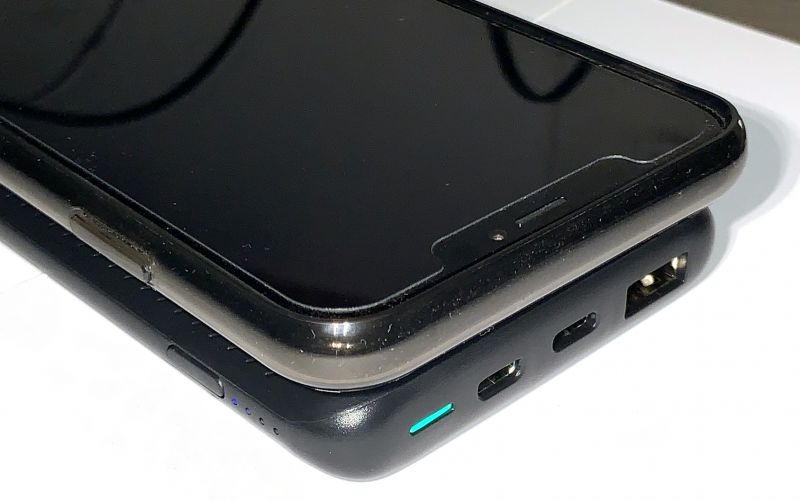 Four blue LED indicators on the side denote how much juice is left packed in the bank. While this isn’t a sure fire way to predict how much charge is left, it does give us a rough estimate of how much to expect in order to charge up a tablet or a smartphone. This isn’t the only indicator that’s found here. There is also a breathing green LED light on the top, near the ports, to show you when the Qi wireless charging is active. You will find the design a tad shoddy as the light tends to bleed out of the micro USB port that’s situated next to it. In fact, this LED light is a bit too bright, so at night, while in use, we found it a little disturbing to sleep next to. 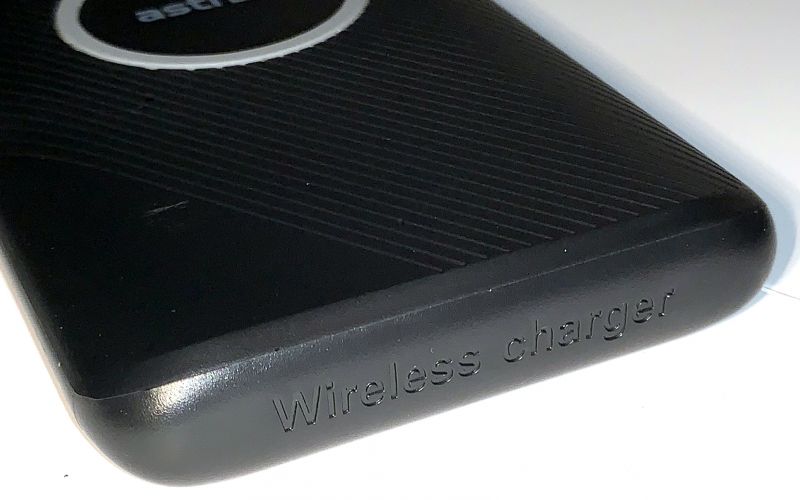 The only button found here is a power button. To initiate the Qi wireless charging, this needs to be pressed. By adding a power button here, Astrum has ensured a fail-safe method for utilising the wireless charging feature only when needed and not constantly on ensures there is no unnecessary battery wastage. 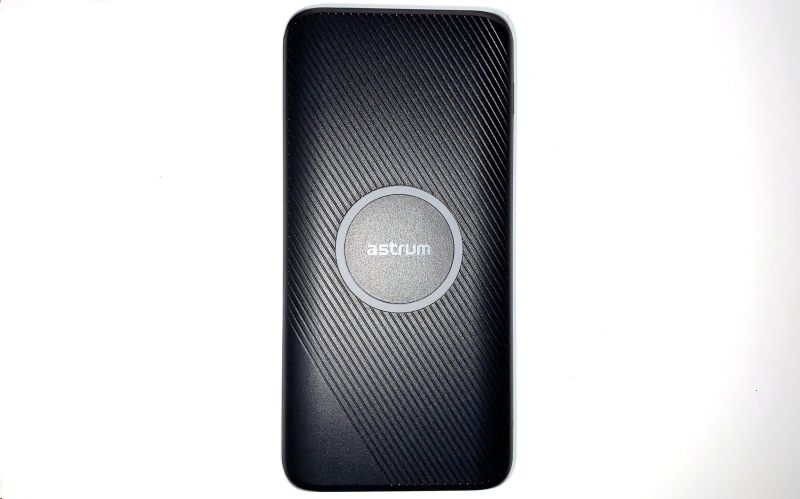 The weight is around 210g and it measures 154 x 75 x 17mm which is approximately the size of an iPhone XR (but a lot thicker) making it easy to tote around in a backpack, handbag or a larger purse. Sadly, you cannot simply place the phone on it and throw it into your backpack. The wireless charger will only work well if the phone is placed exactly on top of the power bank.

The Astrum PB310 comes with a non-silicone charging pad that holds the smartphone in place. This was our go-to option for charging an iPhone XS Max. With it, we managed to top up the smartphone about three times from a dead battery to 100 per cent. There isn’t any fast charging tech embedded in the device so charging it was as long as it would generally take to charge the iPhone from a 5V power socket with the charger and lightning cable it came packaged in. The charging time for the iPhone to be fully charged from a completely depleted battery lasted about three and a half hours. 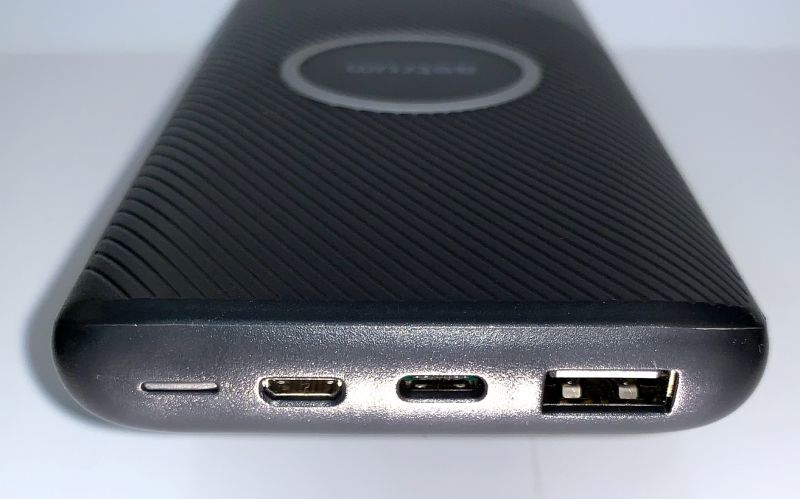 A neat feature here is that it has a built-in smart chip, intelligent identification equipment, smart matching and automatic charging current dual USB ports. This means that it won’t damage a smartphone by providing a higher voltage than required. The ability to automatically charge a device is a neat feature as all you need to do is plug the charging cable into the power bank and it will start charging automatically. The power bank also comes with Smart IC protection which avoids the circumstances like over-charging, over-discharging and a short circuit. 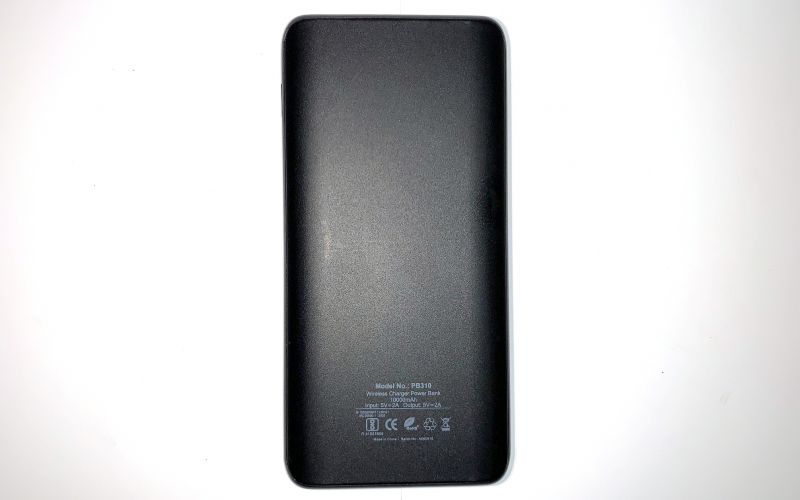 While the performance is as advertised, there’s no real strong point to write home about. However, it does the job it intends and does it well. The battery life of the PB310 will definitely differ from person to person and the more devices that are connected, the faster the battery will drain. With that being said, it is fabricated with a 10000mAh Li-Polymer battery that withstands 500 power cycles and can fully charge most smartphones up to 2-3 times on an average. 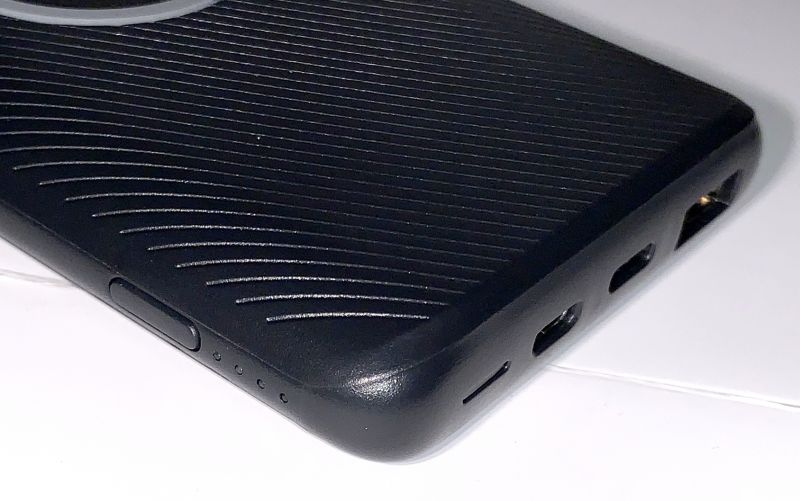 The Astrum PB310 Qi wireless power bank is priced at Rs 2,199 and comes with a 10000mAh battery it offers great value for money. With a number of flagship handsets supporting this new standard, it’s a great addition at an attractive price range. As of now, there are very few Qi wireless power banks available in the market, and if you’re looking for a solution that can top-up your new iPhone or Samsung flagship, then this is a good choice. However, if we are nitpicking, we would have loved it if there was some fast charging tech equipped here as it could have sweetened the deal.