Asus Zenbook Flip 14 review: An all rounder that goes all around, literally

The Zenbook Flip a 14-inch convertible laptop that features a solid build, a super-compact design, decent specifications and the ability to be turned into a touch-enabled tablet.

As the decade comes to an end in less than 60 days, perhaps the most defining trend of 2010-2020 in the world of tech has been the combination of two different domains to create a device that can bring the best of both worlds. This concept brought us tech, all the way from phablets to mousepads that double up as wireless chargers and TWS earphones that turned into speakers. While some of these innovative designs were nothing more than mere gimmicks, some proved to be revolutionary. And perhaps one of the most important ‘best of both worlds’ designs came with touch-enabled, convertible laptops. Powerful yet compact notebooks that could be flipped and turned into tablets.

The design was popularised by Microsoft’s own Surface series of tablets, but now we have a lot of options to choose from in the segment.

Which brings us to the Asus Zenbook Flip UM462, a 14-inch convertible laptop that features a solid build, a super-compact design, decent specifications and the ability to be turned into a touch-enabled tablet. Sounds like it ticks all the boxes, doesn’t it? We reviewed the device for a week and here are our thoughts on the product.

The Asus Zenbook Flip reminds you of simpler design times. A classy metal chassis with a matte finish on top throughout the laptop, including on the keyboard, with chrome accents on the logo, hinges and power button give the laptop the appearance of a timeless classic. The absence of any fancy geometric or reflective patterns states clearly that this machine means business! 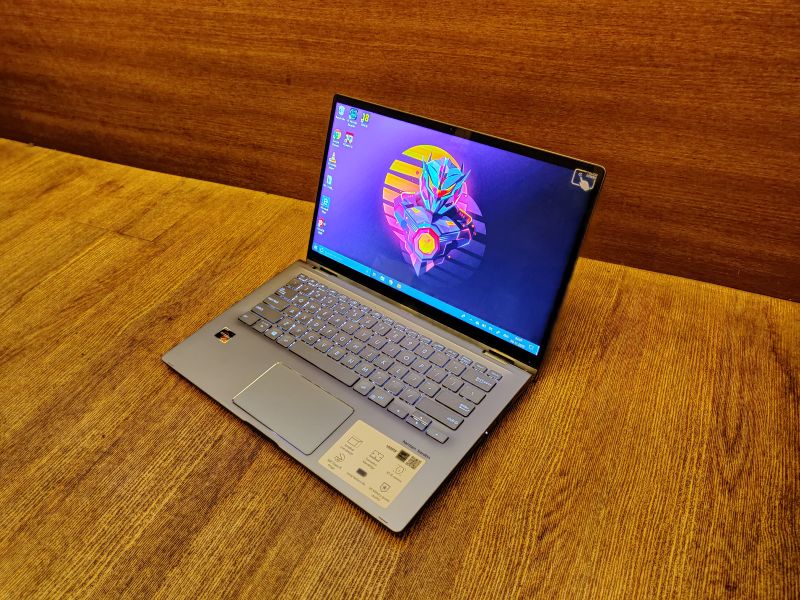 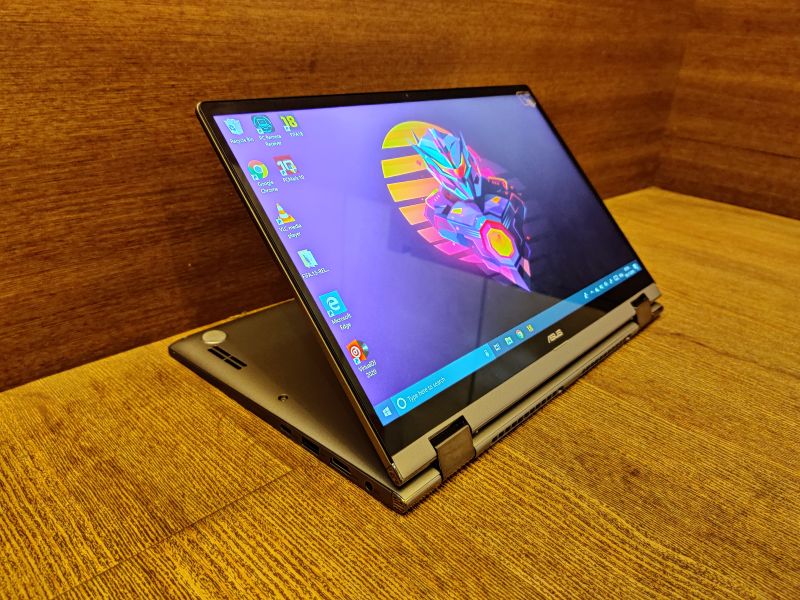 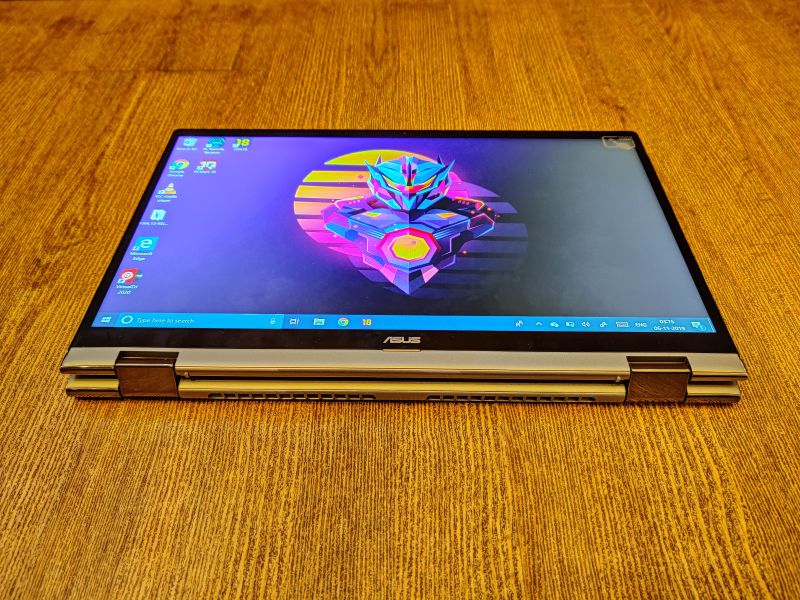 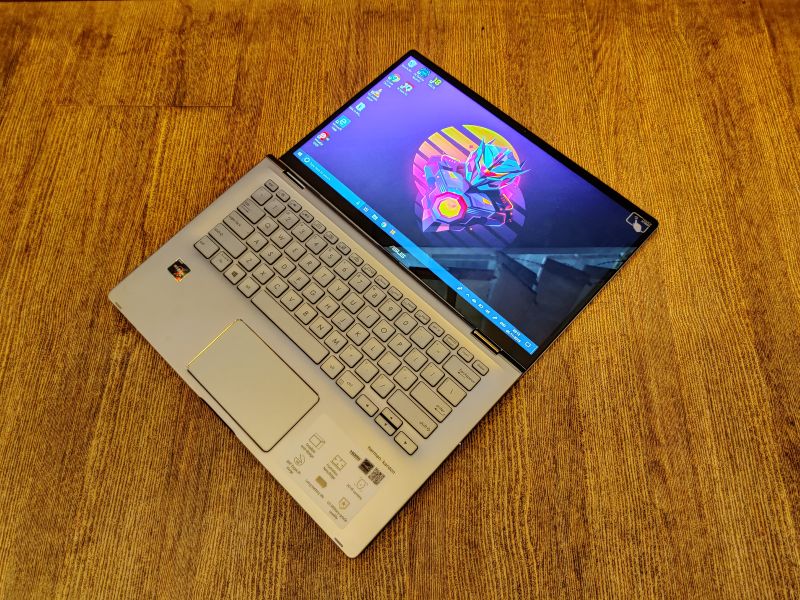 The Zenbook flip is also very compact, being one of the smallest 14-inch laptops out there thanks to the minimal Asus NanoEdge bezels. This allows for more screen real estate in lesser space, giving the UM462 a screen-to-body ratio of 90 per cent. The high ratio not only makes the display more immersive but also gives you more space to work with when in tablet mode. The laptop is also not very heavy, weighing at 1.5Kgs. 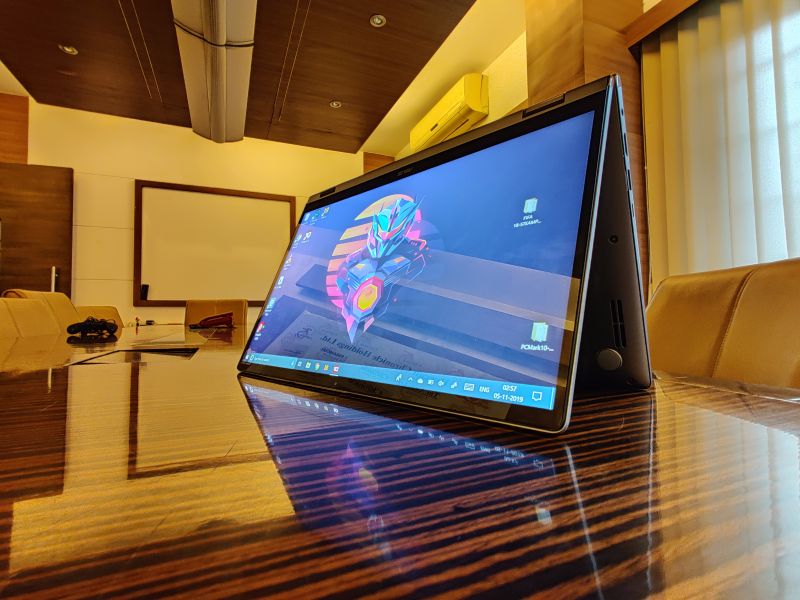 The left edge of the machine features a charging slot, an HDMI slot, A USB slot and a USB-C slot for some future-proofing. On the other end, we have a MicroSD card reader, a second USB slot, a 3.5mm headphone jack, two LED indicators and the laptop's Power button. Placing the power button on the side rather than with the keyboard up top enables it to be used even when the Zenbook is in tablet mode. 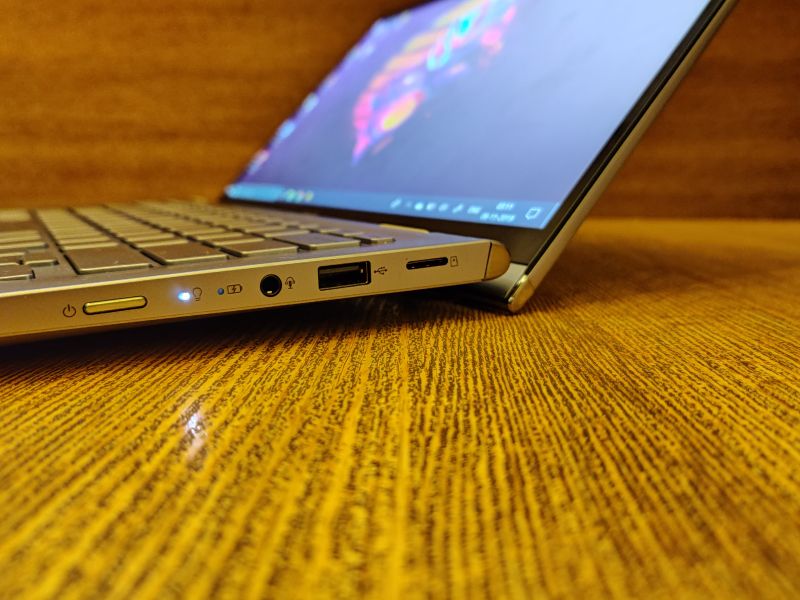 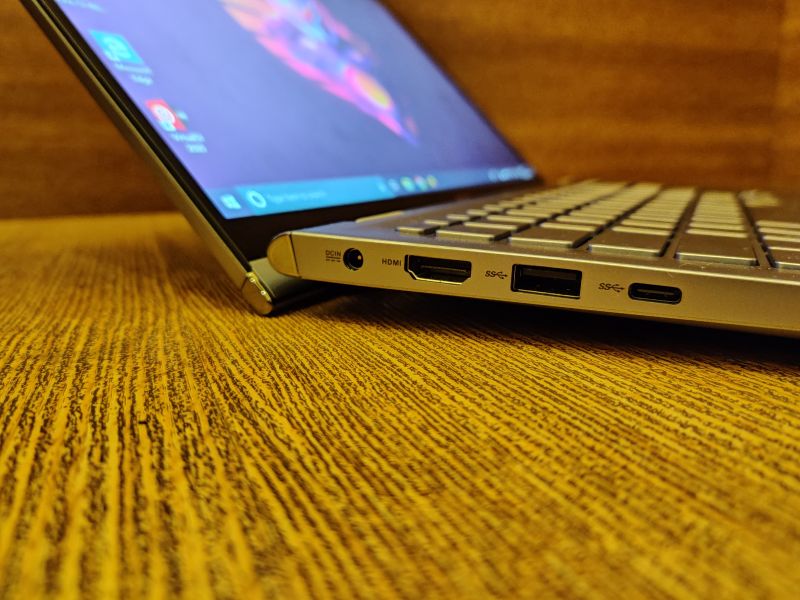 One of the best design elements noticeable in the laptop was the 360-degree ErgoLift Hinge. We’ve seen the patented ErgoLift hinges on other Asus offerings too, but this one takes it up a notch. The Flip mechanism of the laptop is divided into two parts, where the hinge opens and closes and the screen revolves around it. The hinge itself comes into motion when you open the laptop regularly, where you’ll notice the keyboard rising until you reach the limit. This is where the primary hinge locks into place and the screen itself starts revolving around the hinge. The rugged two-part mechanism gives the laptop an edge in durability while maintaining the ErgoLift functionality of enhancing audio output and heat dissipation underneath the raised keyboard. 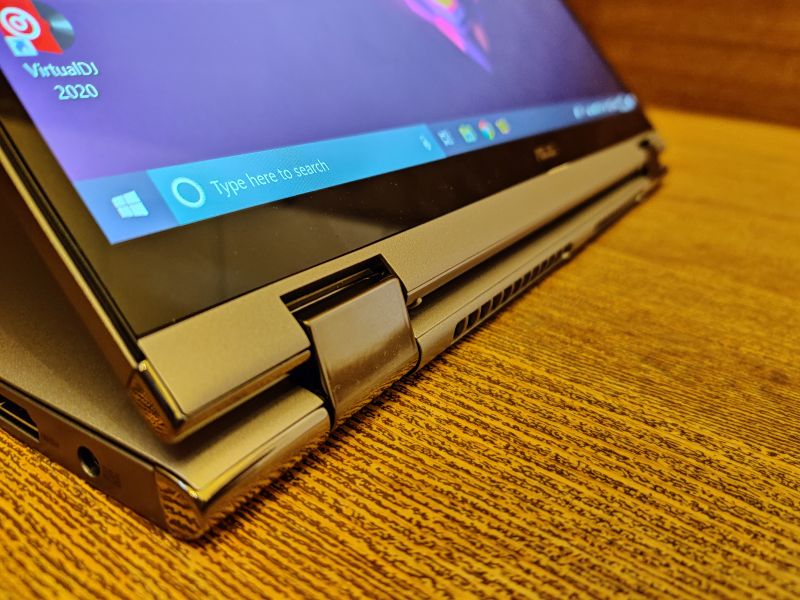 The Zenbook Flip's two-part ErgoLift 360 hinge adds more functionality in its design, makes the hinge stronger, and looks great too.

The build quality of the Zenbook flip is great overall too. There is Military grade MIL-STD-810G certification which means the laptop can hold its own in extremely high altitudes, temperatures and humid conditions. It’s also seen a few drop tests so it’s safe to assume the machine can take the occasional accidental beating too. However, we did see scratches on the keyboard due to continuous use of the the tablet mode, when the laptop lies on the keys.

The Asus Zenbook Flip UM462 features a 14-inch display that somehow magically fits into a chassis this small. A look from outside might make you think this chassis cannot hold a 14-inch screen, but it does. 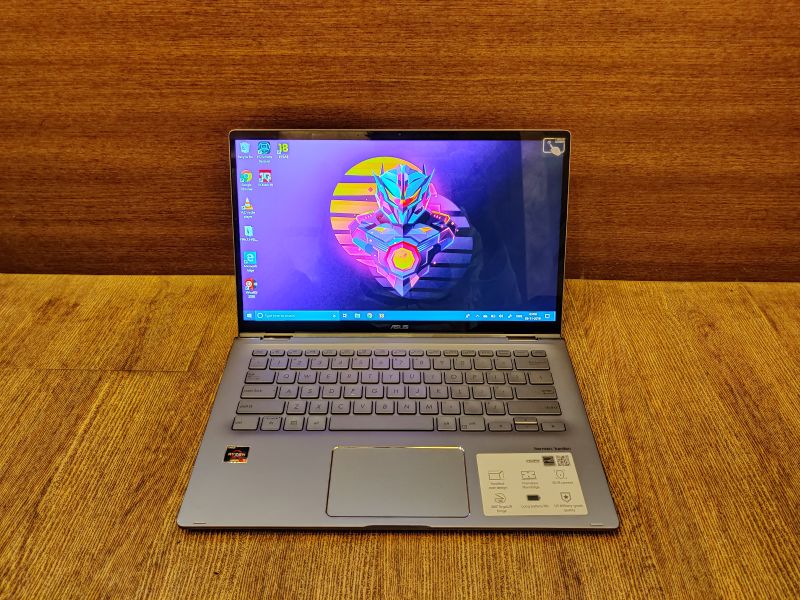 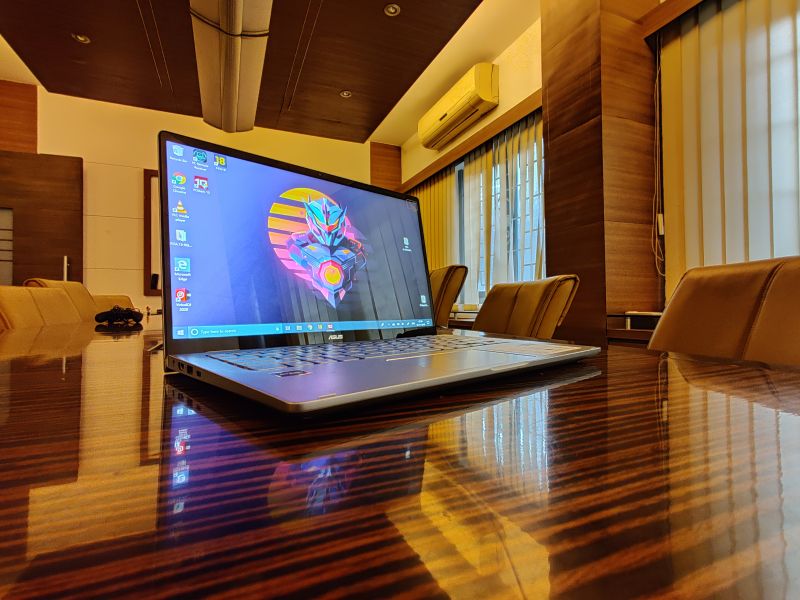 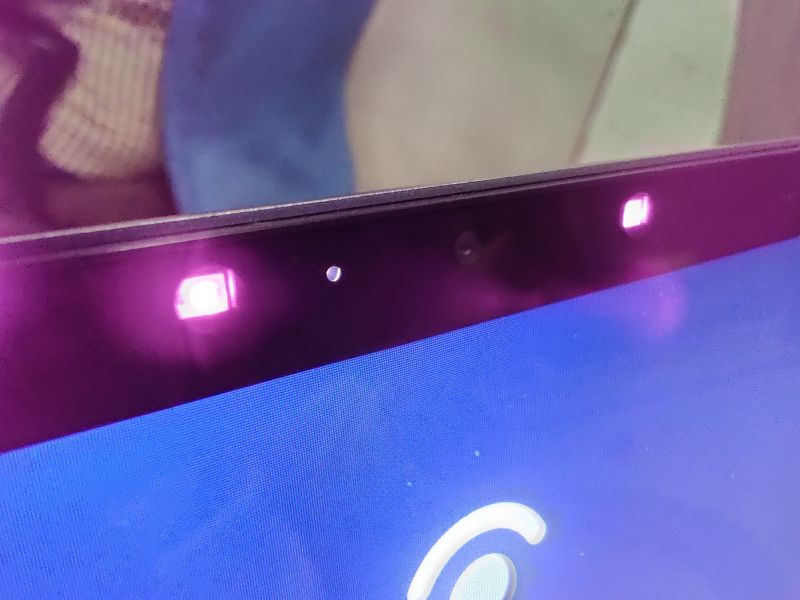 The thin top bezel embeds the camera with IR Face Unlocking capabilities. The screen itself is a 1920x1080 panel that supports 10 point multi-touch input. While not the highest resolution out there, it looks crisp with both text and images. The viewing angles are great on the Zenbook Flip and the laptop gets decently bright as well.

The screen shines brightest when you flip it all the way back and beyond and convert the laptop into a 14-inch tablet. Do note that unlike many models out there, the screen flips 360-degrees but is not detachable. When completely converted, the laptop will automatically enable auto-rotate and ask you if you want to switch to Windows 10 tablet mode. You can either enable the machine to switch to tablet mode every time you flip the screen or make it ask you each time or if you’re not a fan of tablet mode, not use it at all. 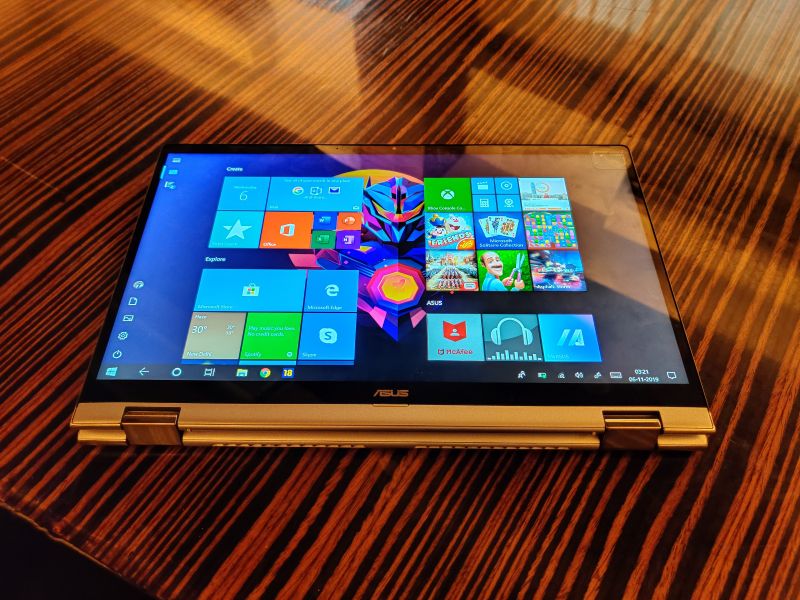 Windows 10’s tablet mode changes navigation throughout the interface for easy touch-based navigating. There is no Desktop anymore and you only have the Start Menu to open new apps. Swiping from the right edge brings you some quick settings like the Tablet Mode toggle, Brightness, Bluetooth, Airplane mode, etc. You also have a notification panel above the toggles where you will stay updated from various apps.

Swiping in from the left edge brings you the recent apps view where you can switch between all apps and close unwanted ones. You can tap to emulate a click, drag with your finger to emulate a dragging action and long press to emulate a right-click. The learning curve here isn’t very steep and even new users should get used to Windows’ tablet mode pretty quickly. Whether you prefer it over the regular mode, is a matter of personal choice. 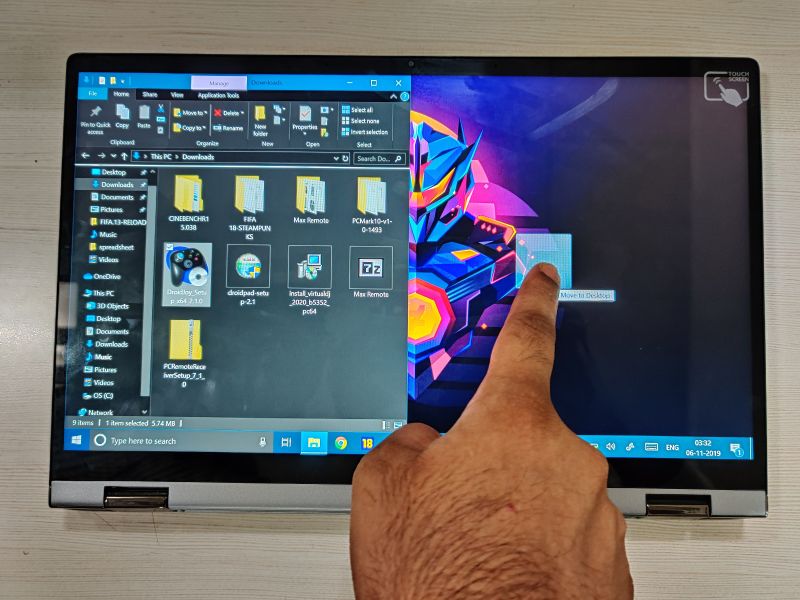 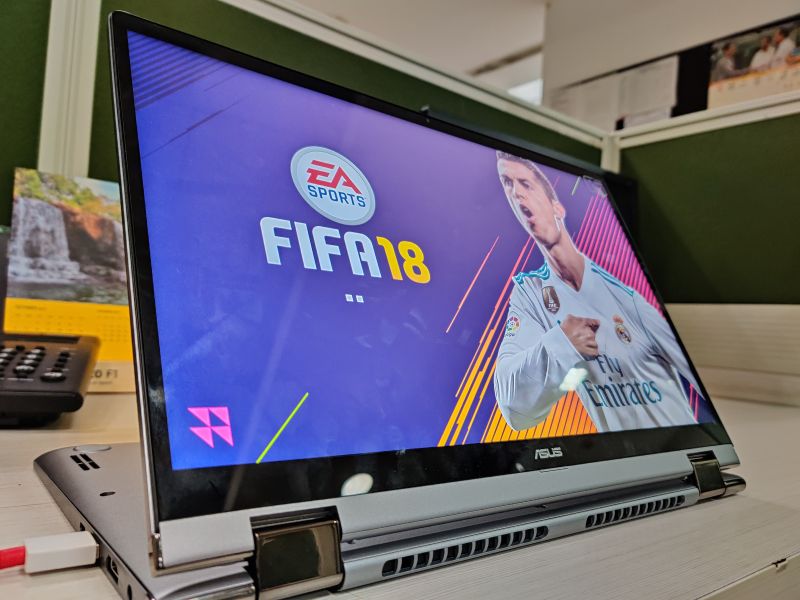 The 10-point touchscreen gives you the freedom of operating your programs using multiple fingers for complete control. This is especially useful for programs like Virtual DJ, where you need to operate more than control at a time, or with various games that support touch input. You could alternatively use the provided stylus for precision in programs like Photoshop, Illustrator, Corel Draw, etc.

One thing to note is that the laptop’s air vent which is usually pointed away from you will be pointed towards you often when using the laptop with the screen flipped. While you won’t get blasted by warm air, you will be able to notice the heat directed at you when your hands are rested close to the bottom edge of the screen.

The Asus Zenbook Flip features a great keyboard. The keys here are well-built and they feel solid to the touch. It makes sense for this keyboard to be able to take some regular wear and tear head-on since the keyboard becomes the base of the laptop when it is in tablet mode. Key-travel is minimal and there are three levels of backlighting for operating it in the dark. The keyboard also automatically turns off completely when the screen is flipped over to prevent any accidental presses.

Asus’ evolved Function keys feature is also present on the Zenbook Flip. This allows you to use the secondary functions of the Fn-keys (F1-F12) as the primary functions, giving you easy access to the available Fn key shortcuts including toggles for brightness, volume, keyboard lighting, and more. If you are not a fan of these and use the actual Fn keys more often, you can always switch back to regular functionality by pressing Fn+Esc together.

The elongated arrow keys might take some getting used to and while the keyboard overall is great for typing, the occasional gamer could find the arrow keys troublesome.

We didn’t think the Zenbook Flip was a very performance heavy laptop, but we couldn’t be more wrong. The laptop is a beast, powered by the AMD Ryzen 5 3500U processor and 8GB DDR4 RAM. We have AMD Radeon Vega 8 for the machine’s graphical processing needs. The storage is a 512GB SSD unit that works super fast. The SSD speeds are noticeable in boot-up times, transfer speeds and loading times for apps and programs. This results in the machine flying through multiple apps/programs at once, providing decent performance during the occasional gaming sessions as well. Here are the benchmark scores for the Zenbook Flip 14 UM462: 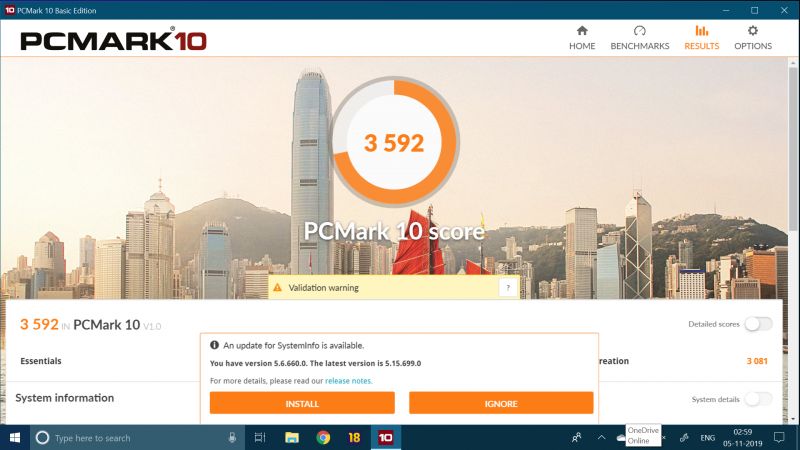 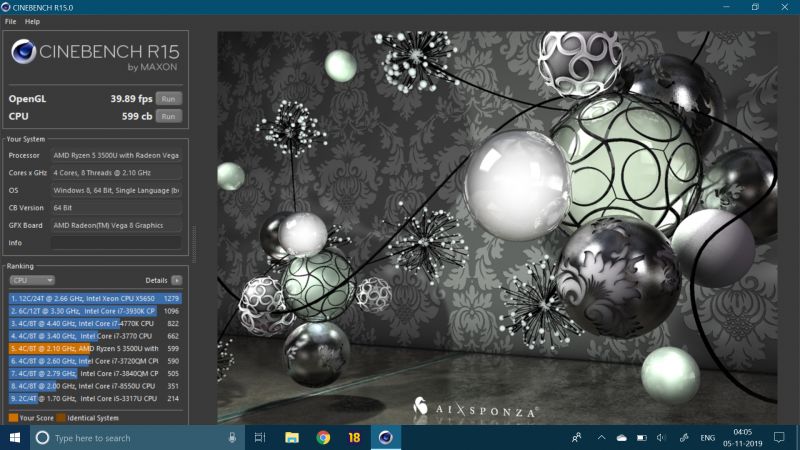 Other aspects like the IR Face unlocking worked great. You will have to add your face three to four times in various conditions to get the best results. Sound is tuned by Harman/Kardon like other top-end Asus machines and the SonicMaster stereo audio system results in crisp and rich sound output. The volume isn’t the loudest we have seen but that isn’t a deal-breaker at all.

Battery Life is excellent on the Zenbook Flip UM462. The laptop comes with a 42Wh lithium-ion battery, with the company claiming nine hours of usage on one charge. In our usage, one charge did get us through a day’s worth of moderate use with ease. Note that the battery is non-removable.

Starting at Rs 64,990, the Asus Zenbook Flip is a great laptop in the segment. It is not the most cutting edge example of futuristic tech like the Zenbook Duo series and Screenpad 2.0 bearing Vivobook series laptops that Asus has recently brought, some of which belong to the same segment. But the device instead bets its chips on raw performance and a convertible form factor that is both reliable and solidly built.

Apart from the full touch screen, the laptop sports a classic body with nothing visibly fancy, but this works in favour of the approach the Zenbook Flip is heading towards. It doesn’t have the latest innovative design, or funky looks, but is very powerful to make up for that, and hits the perfect balance between all aspects of a good overall laptop in the price range, which we believe is one of the most important and often overlooked elements. The machine isn’t targeted at a particular set of artists or the 9-to-5 desk worker, but you can rest assured that whoever holds this notebook is quickly comfortable with it and can get straight down to business.