DECCAN CHRONICLE. | VISHNU SARANGAPURKAR
Published Feb 9, 2018, 6:06 pm IST
Updated Feb 11, 2018, 8:04 am IST
FIIL has been impressive with their wide range of products and the IICON wireless can be a competitor to existing brands in this segment.

These aesthetically good-looking headphones also sound good; in fact, we have been using it as our daily audio accessory since its arrival last month.
Rating:

The need for Bluetooth wireless headphones are increasing substantially — thanks to most premium flagship smartphones seen ditching the essential 3.5mm headphone jack. This has led to the need for currently emerging ‘no wire’ Bluetooth headsets and earphones — thanks again to Apple who started this trend. Top smartphone brands such as Apple and Google compensate for their headphone jack removal with Bluetooth headphones, called Apple AirPods and Google Pixelbuds, respectively (but optionally sold). Though the audio quality difference between wired and wireless headphones is still arguable, manufactures are trying to make premium wireless headphones an essential thing for the future. 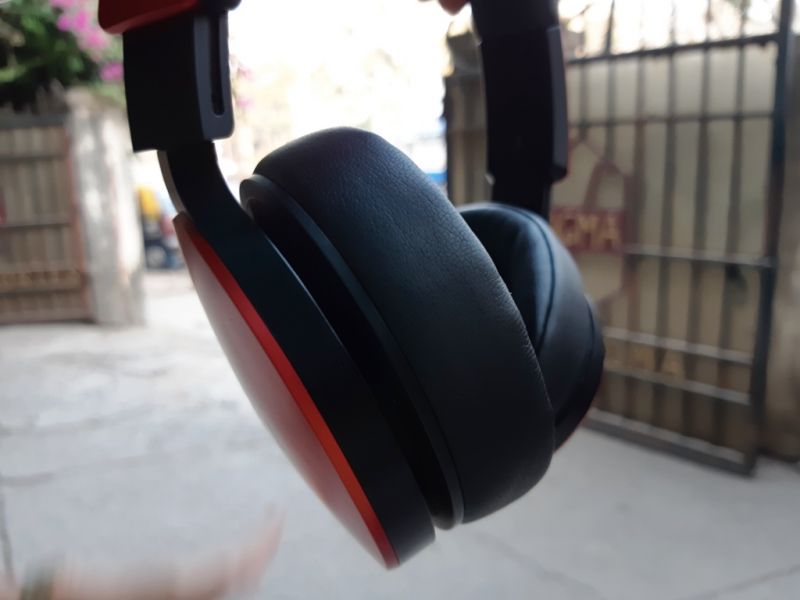 FIlL, a company founded by music professionals, has been making wireless headphones for a while and you can now say hello to the IICON wireless over-ear headphones. Our initial expression about the IICON was great and were surprised to find out what more it could do. These headphones feature ANC (Auto Noise Cancellation) and include a 3D stereo experience with bass boost. To make give it the premium feel, FIIL has given the IICON a touch and gesture-based control on the right ear cup which functions as the audio controller.

The IICON is almost entirely made of durable plastic, but has a brushed aluminium alloy finish which gives it a premium feel. The genuine leather and  foam pads on each speak for a good quality choice. A touch control panel is featured on the right ear cup along with a multi-function button and a 3.5mm headphone jack. These headphones feature NFC for faster and effortless connectivity, a single multicolour LED indicator for battery status and a micro USB port for charging, all these are on the left ear cup. The headphones are bundled along with a convenient and firm carrying case and also bundles two 3.5mm audio jack cables, for iOS and Android each. A micro USB charging cable is also provided. 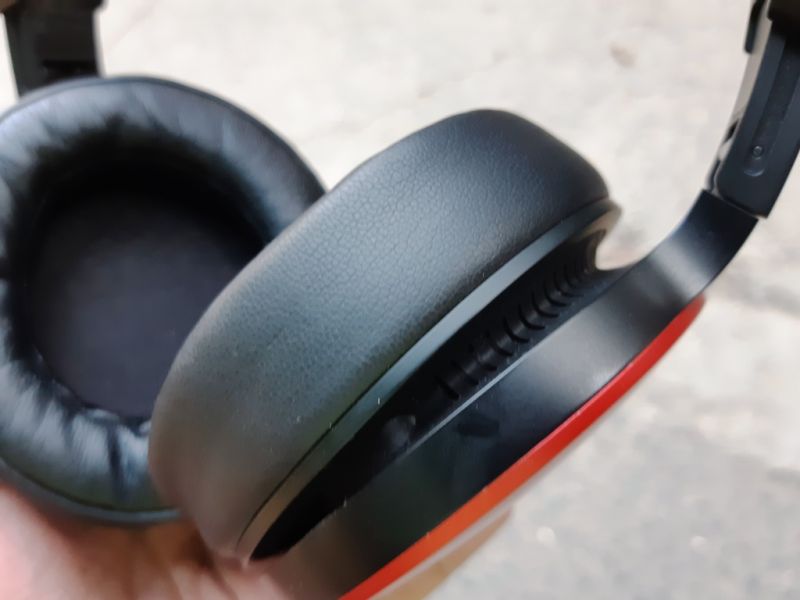 The ear cups are fairly adjustable with hinges; however, it could be an issue for those who travel frequently and require presets according to their wearing comfort. In this case it is a bit annoying since these are foldable and adjustable ear cups and have to be reset to its default position every time it is tucked into its case. 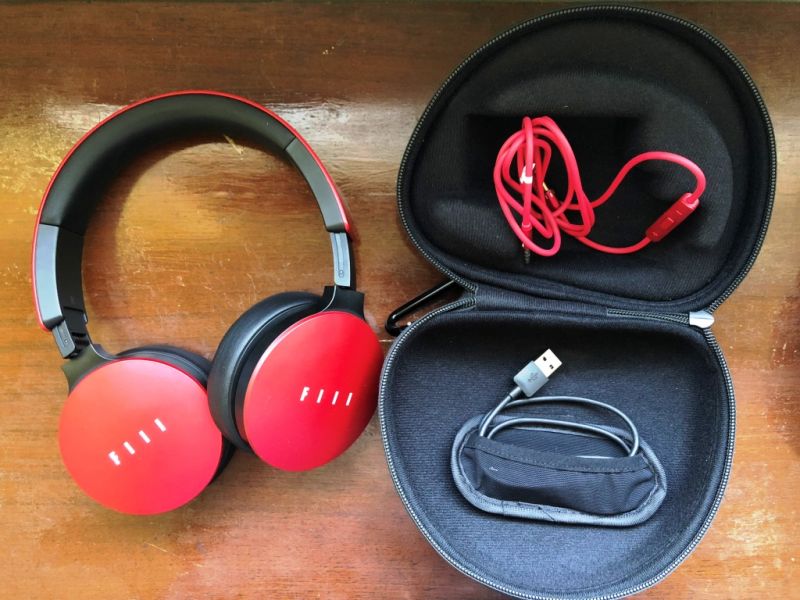 As these headphones are made of plastic they are lighter and are pretty comfortable to wear, even though they put on a bulky look. The adjustable hinges are also plastic and the leather ear cup pads are non user replaceable, putting a question on the future of this headphone if the ear cup pads wear out. However, it all depends on users' method for hygene and care.

The FIIL Wireless headphones are equipped with 40mm speakers, each with a frequency range between 15Hz-22kHz. These headphones support Bluetooth v4.1 and can be paired with up to eight devices, that can simultaneously connect with two devices. They weigh around 270g and don't feel heavy over the ear. Three user modes are featured in these headphones – Bluetooth wireless mode – Active power mode (headphone powered on with an audio cable connected, using the internal amplifier) – Passive wired mode (headphone powered off with an audio cable connected, using the audio players amplifier). 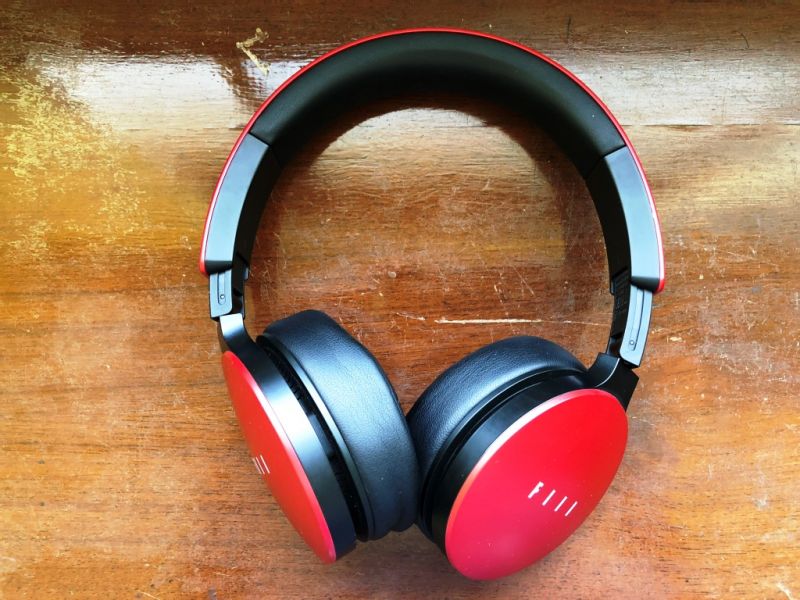 These aesthetically good-looking headphones also sound good; in fact, we have been using it as our daily audio accessory since its arrival last month. These headphones have an Active Noise Canceling (ANC) feature with up to 98 per cent noise cancellation for high frequencies and up to 85 per cent for low frequencies. The ANC works surprisingly well — it can cut almost, completely you off from your surroundings and gives you an immersive feel of the audio being played. However, users can still turn off this feature by using the touch-swipe feature on the right ear cup, or via a dedicated FIIL app on the smartphone. 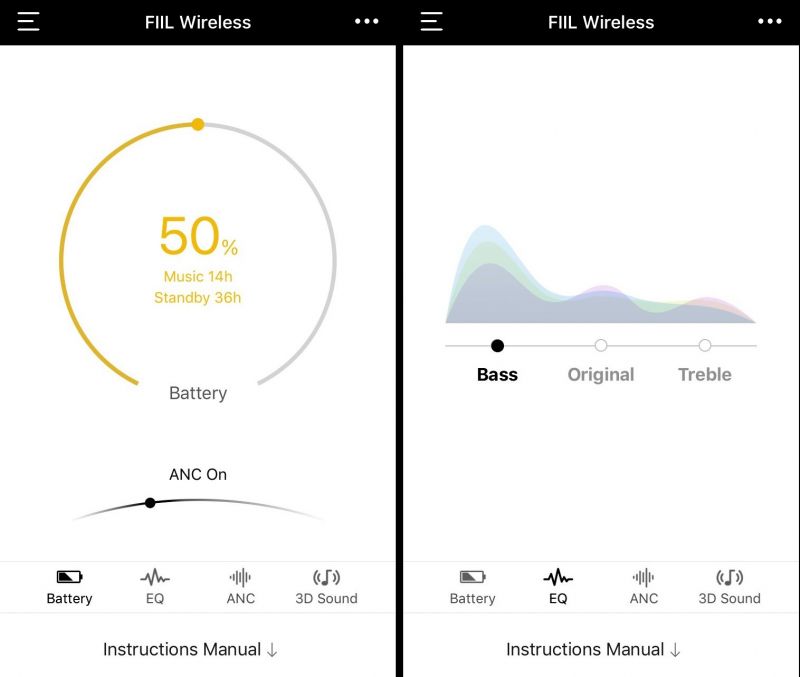 Speaking of the FIIL+Global Edition app, it highlights the headphones battery status, ANC on/off or monitor modes. Monitor mode is feature is meant for listening to the surroundings and having conversations without the need of removing the headphones. It basically uses the onboard microphone to send the sound signals from outside to inside. 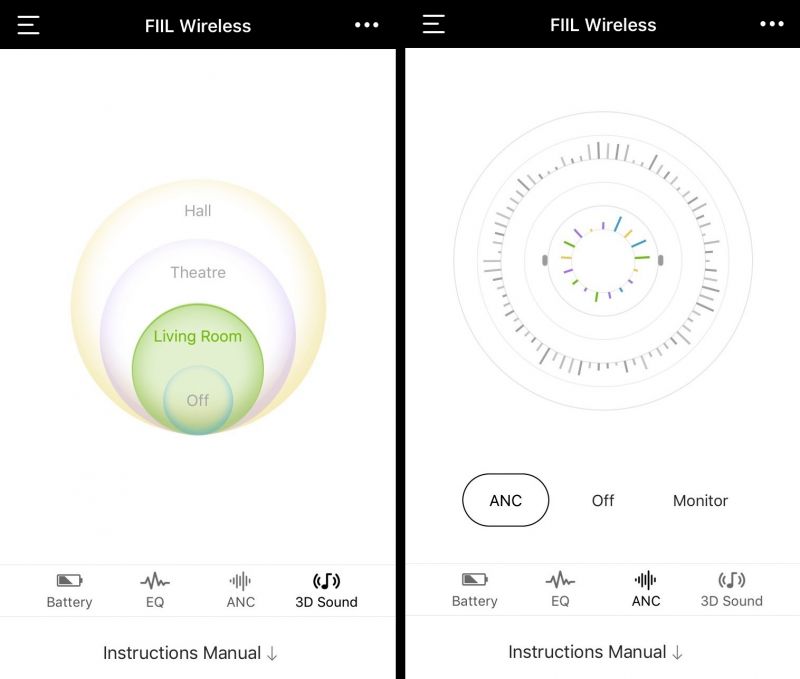 The app also features an equaliser and 3D surround mode which the user can customise as per his preference. The app is supported on both Android and iOS devices.

The FIIL Wireless headphones automatically goes into Bluetooth pairing mode once switched, and is greeted with a voice that gives the user information about the inputs and mode change. The multi-function button when long pressed can turn on/off the headphones and can also acts as a call button. The same is used for Bluetooth pairing.

The connectivity on this device is good too — the company claims the transmission range up to 330ft outdoors. Indoor use had a decent range up to 40ft during our tests, but we could not go further due to lack of space.

What’s fascinating about these headphones are the touch-based controls on the right ear cup. These touch gestures include swiping left/right for changing the tracks, volume up/down and also to turn on/off the ANC feature while the music is paused. These gestures come in handy as it eliminates the need of using your smartphone at every given point.

The wireless call quality on these headphones are also remarkably good.

The bundled wired cables are specifically meant for iOS and Android respectively have a bunch of controls like activating voice assistant, answering/holding calls, volume and a few more. These features are illustrated below: 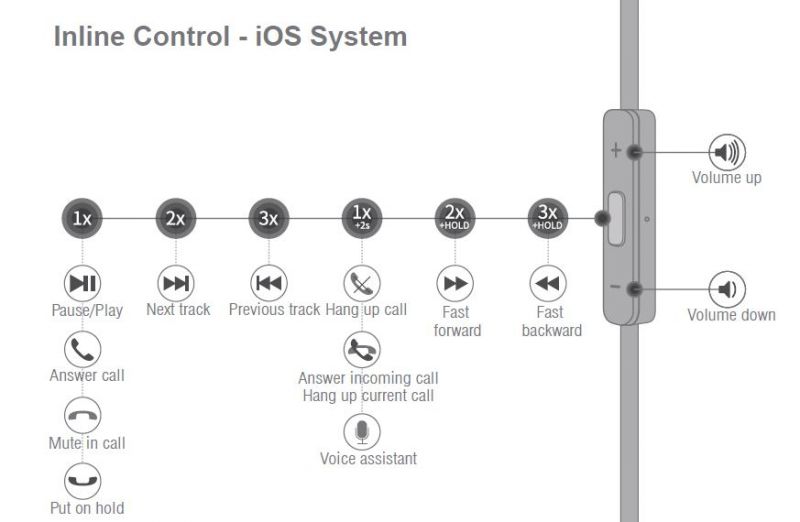 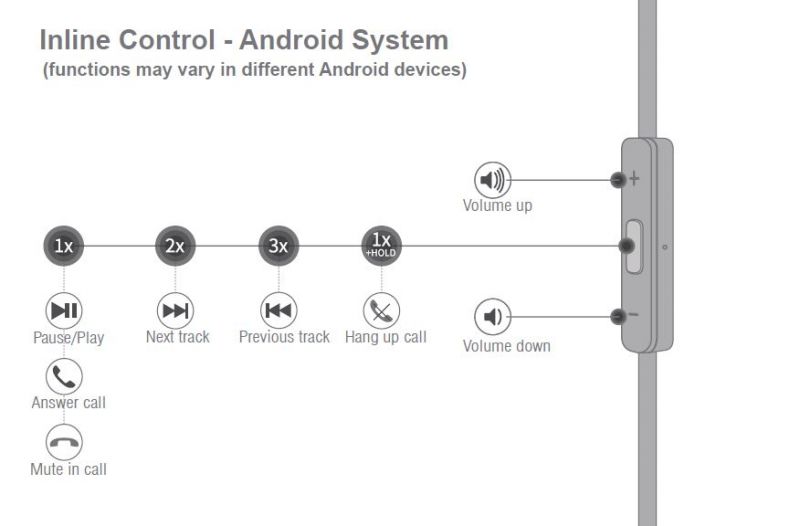 Sadly, the iOS cable provided is not a Lighting cable and cannot be used directly with the latest iPhones, forcing you to  use the converter. However, adding a Lightning jack would also make it further expensive for inclusion of a DAC.

The most predominant part which any buyer would be looking for in any headphones is the audio performance. These headphones are not in comparison with any high-end headphones, but speak for themselves. Keeping this in mind, the IICON sounds exceptionally good, the sound quality of the music is great. However, the low-end bass takes a beating — it lacks the punch and boom that one could be looking for.

One specific feature which needs to be mentioned here is Theatre mode – in the 3D sound function. When enabled, it combines ANC and 3D mode to give you an immersive feeling especially and when you watch any engaging movie. Speaking of movie watching, when the noise cancellation feature kicks in, it can give you an overjoyed experience of the content being watched. 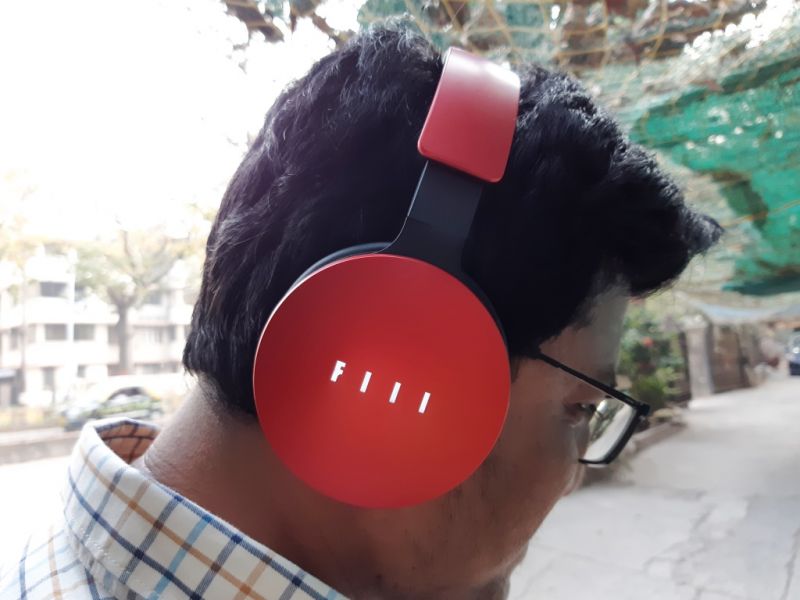 The audio quality on these headphones comes with a mixed bundle of highs and lows, when listening to any audio genre, either movie or music, the lows are crystal clear, but the highs are a deficit to an extent. As mentioned earlier, the bass is pretty good, but lacks the extreme punch. But the mids and highs are pretty much defined, and the entire mix is good for watching movies and certain genre of music.

Though the spree of these headphones’ all-inclusive experience is pretty subjective, it can be defined as exceptional.

These headphones can be worn up to a certain period of time and we wouldn’t recommend using for any extended periods — thanks to the tad bulky nature and slightly heavy feel. The headphone's overhead band is coated with leather and foam to make it as comfortable as possible.

This brings us to the most substantial element – the battery. The FIIL IICON has a good battery backup, which is hard to kill easily. The company claims up to 33 hours of playback time. During our daily run, we managed to pull out more than 38 hours. The battery was exhausted in two weeks with an average use of around 2-3 hours of daily moderate use.

The battery takes a good 2.5 hours to top up which is great. If you manage to run out of power, you still have the advantage of using the 3.5mm wired-cable. Using the headphone with wired or Bluetooth modes may not give you any much difference in audio quality. Though the common user will probably never guess the difference, an advanced user or audiophile would be able to spot it. Using the headphones with wired mode will give you the best audio quality, but will depend on the audio device being used — most premium smartphones use a custom audio chip for superior sound quality and the FIIL could make the best of this feature. However, if you plan using the Bluetooth mode, you should be aware that there would be a noticeable audio lag when watching movies. Overall, you won't be disappointed. 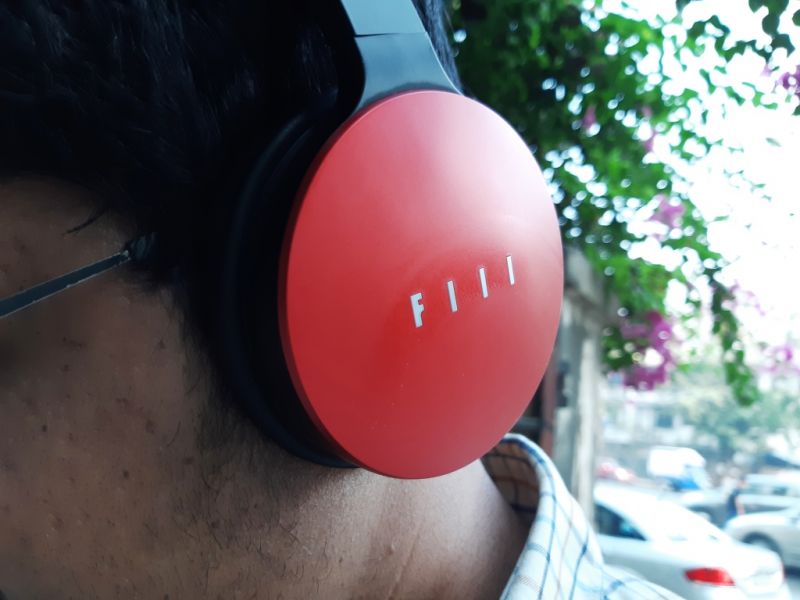 FIIL has been impressive with their wide range of products and the IICON wireless can be a good competitor to already existing brands in this segment. The quality of audio on these headphones are substantially good and feels premium in terms its build. Overall, the FIIL IICON is definitely worth considering if you are looking for premium quality audio equipment. Priced at an MRP of Rs 17,000 and an MOP of Rs 13,999, these headphones pretty much offer a decent value its price.

Cons – low on bass, feels a bit heavy after prolonged use.