Noise has nailed it in most of the parameters that make for a great wireless set of earbuds.
Rating:

Since Apple unveiled the AirPods back in 2016, every audio gear manufacturer has tried to offer a tempting alternative at various price points. However, the completely cable-free design required lots of clever engineering and eventually adds to the price, which is why the usual set of affordable ones are mostly limited to neckband style earphones. In the real world, a neckband style wireless earphone is still annoying as you have to deal with adjusting the neckband to your comfort. Noise, the brand that’s usually known for bringing expensive concepts to the masses at relatively affordable prices, has paid attention here and come up with something that earphone hunters have been wishing for years. Called the Shots X5, it’s a pair of completely wireless earbuds that rest in a box and cost Rs 4,999.

However, a pair of earphones selling for such lower prices usually translates to poor audio quality and an overall unimpressive fit. Is it the same with the Shots X5? Let’s find out.

As stated, the Shots X5 is completely wireless — they're just two tiny earbuds that sit within a small carrying case. The earbuds are pretty small and fit it into the ear canals very comfortably. The unique shape of the buds, especially with a small protrusion on the top to lock it into the earlobe, makes it sit sturdy in the position you leave it — it doesn’t fall off easily. The silicone ear tips are nice and comfortable too, although Noise packs in an extra bunch of ear tips in case, the standard ones are too small for your ear. But that is an individual preference anyways. 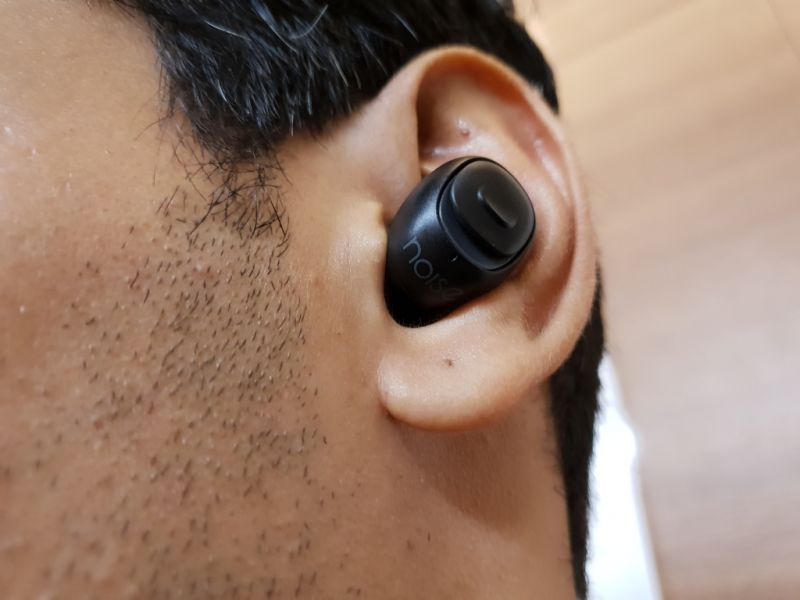 Both the earbuds have a physical button for powering them on or initiating the pairing mode. The buds also house LED status indicators that are subtle, unlike similarly priced earbuds that house eye-blinding lights. They glow white while charging or connecting and red when the power is low or disconnected. And obviously, both of them have a microphone built in. With IPX5 water resistance, these should be able to hold up pretty well to sweat and light showers. 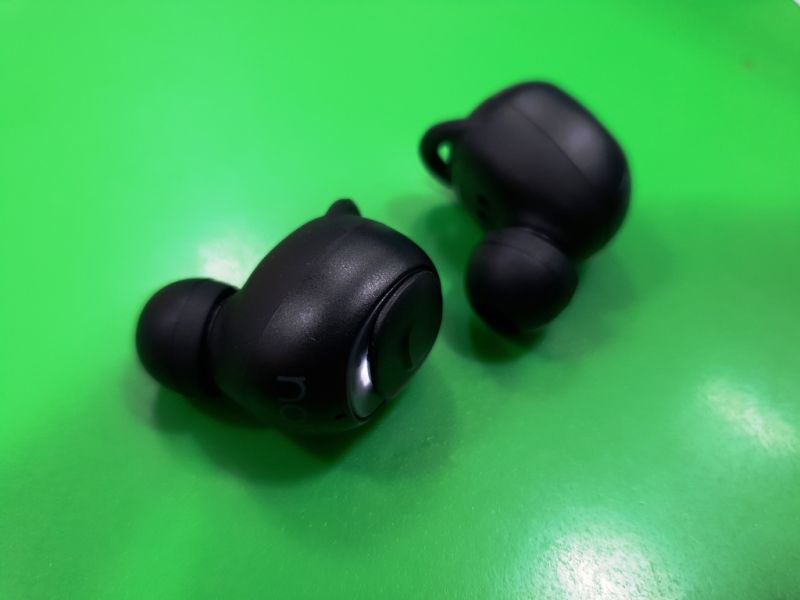 However, the earbuds alone don’t make the whole package appealing. The plastic case, which looks similar to a contact-lens box, has a whole lot of tech to make the Shots X5 truly smart. The slots, in which the earbuds sit, have magnetic POGO pins that charge the earbuds as soon as you pop them in. The magnetic housing also activates the Bluetooth connectivity as soon as you pop them out of the slot. The weird bulge on the box houses a 2200mAh Li-ion battery that becomes the sole power source for the earbuds — no pesky micro USB ports required to be plugged into the earbuds individually. 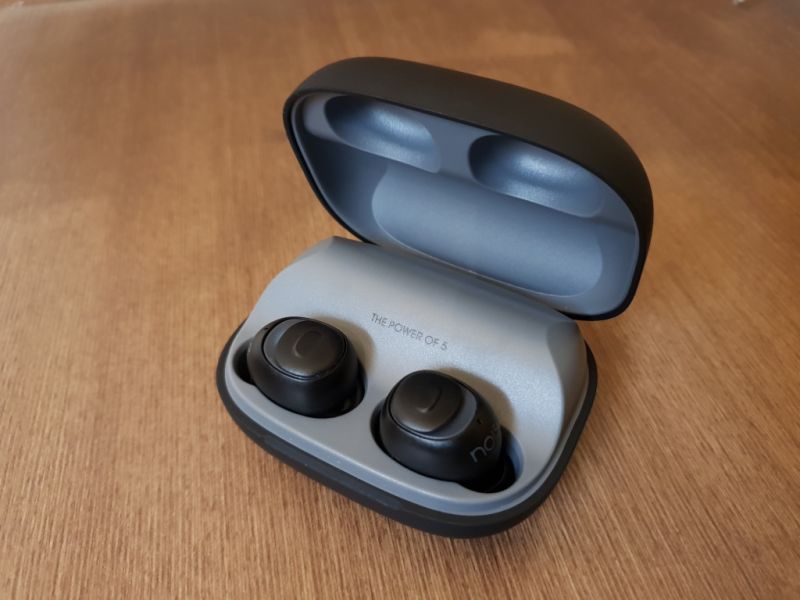 However, there’s a micro USB port sitting on the outside, behind a rubber flap, that feeds power to the 2200mAh power reserve. An LED indicator depicts the amount of power in reserve by constantly blinking in preset patterns — four times if its power above 75 per cent, three times if it’s above 50 per cent and so on. The USB port that you see is meant to connect your smartphone’s charging cable and feed power to it in case your phone’s on the verge of dying in the middle of the road. In essence, the case is a mini power bank that with you always. The box in itself has a smooth rubberised texture that is grippy to hold but attracts quite a lot of smudges. 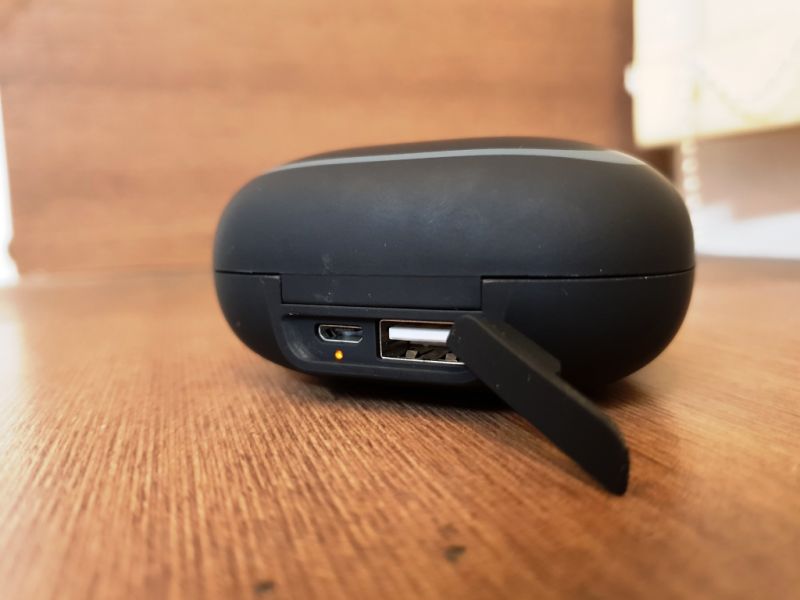 Using the Shots X5 is easy — you open the case, pop out the earbuds, put them in your ears, turn on the Bluetooth on your phone and you are good to go — it works effortlessly for both iOS and Android devices. This is the most important part that every wireless earphone should nail and the Noise Shots X5 does this without a slight hint of annoyance. However, where the Shots X5 annoys is with the physical buttons on the earbuds. The buttons require a hard press for you to play/pause, answer/end calls or summon your virtual assistant, which often leads to dislodging it from the earlobe. Noise could have used capacitive touch buttons instead which could have taken tap-based gestures to the do the same.

Nonetheless, this small chink in its armour is overshadowed by the audio quality. We were highly impressed with what this nut-sized earbud can pump out. The mids and highs are rendered well, with the earbuds never distorting towards higher frequencies. The vocals are rendered clearly as well. However, what impressed us highly was the lower frequency output — the Shots X5 can manage those drum beats by pumping out the ‘thump’ that you usually expect from most earphones. There’s a good amount of bass that makes it a pleasant experience to tune to your favourite tracks while on the move. The passive noise cancellation muffles ambient noise, and works really well. The Shots X5 is easy on the ear outdoors, especially at train stations and busy street junctions. 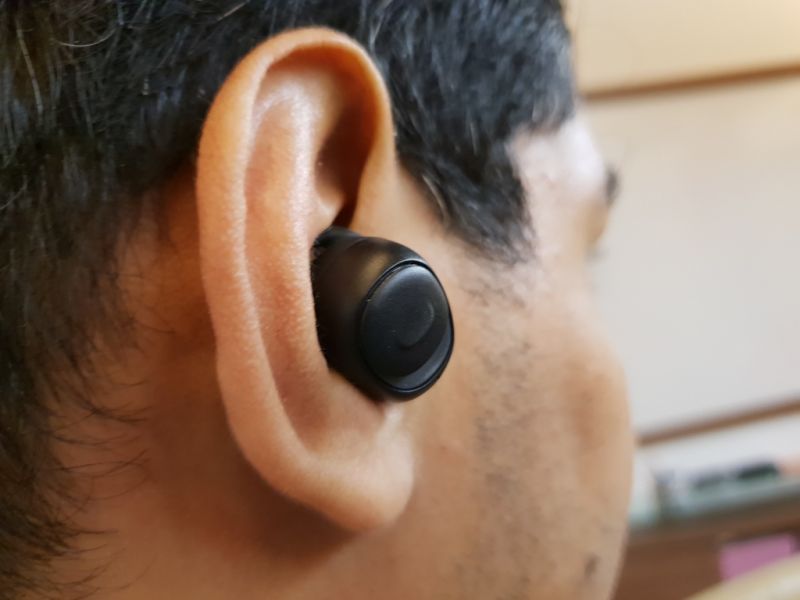 A strong connectivity also matters a lot for wireless earbuds. Noise has catered to that with Bluetooth v5.0. With one of the latest wireless connectivity standards, we never witnessed the Shots X5 losing connection with the smartphone or lagging while streaming audio. To give you a clear idea of the gains of Bluetooth v5.0, we managed to complete a full match of PUBG MOBILE with the Shots X5 doing the audio streaming duties, and the delay in synchronisation between the audio-video was almost negligible. And whether it's an iPhone or an Android device, the connection remains stable.

One more feature that impressed us highly for an earbud of this price category is the presence of a stereo mode for calls. While taking a call, you can listen to the caller from both the earbuds, which is how it should be in every completely wireless earphone. However, like all other wireless earbuds, there’s one gripe with Shots X5 — the voice reception from the microphone. Since the mic sits in the right earbud, it isn't as efficient as the mics on wired earphones for catching your voice. As a result, taking a call on the X5 is mostly advisable in quieter surroundings.

With Shots X5 ticking most of the boxes green, does it round up good scores in the battery stamina department? Well, we have been using the Shots X5 for more than 10 days at a stretch as the primary pair of earphones. We brimmed it before we took it out and after close to two weeks, the LED indicator on the box shows more 30 per cent juice left — that’s how much 2200mAh translates to charging the small earbuds. The earbuds themselves hold 60mAh power reserves each. We have been listening to audio, while taking calls in between, continuously for up to four hours and the earbuds would still keep on pumping audio. 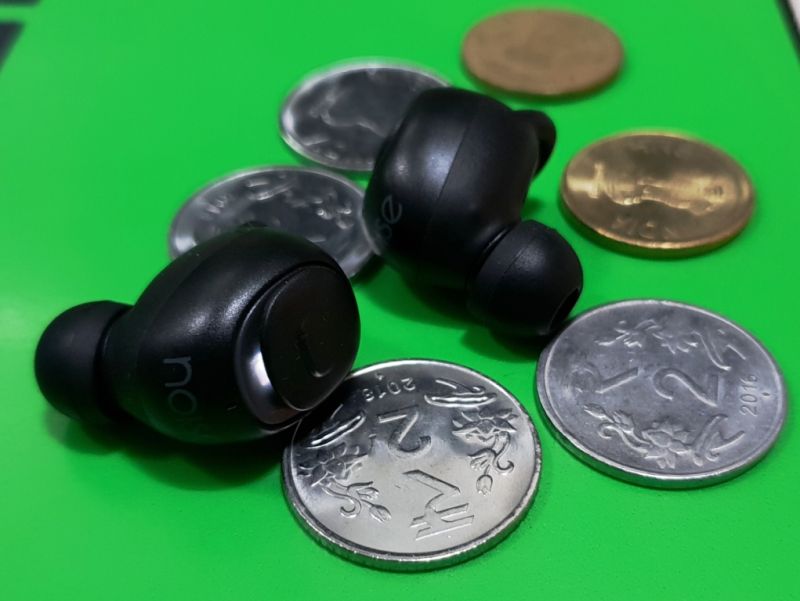 So, the final question remains to be answered — are the Shots X5 the wireless earbuds we have been waiting for since years? Probably yes! Noise has nailed it in most of the parameters that make for a great wireless set of earbuds. The Shots X5 are compact as well as comfortable to wear for longer sessions, deliver an impressive audio performance, have reasonably good battery life and, most importantly, are very easy to live with on a daily basis. The only two issues with the earbuds are the physical buttons and the weak microphone reception. Barring these, it won’t be a stretch to term it as a true AirPods competitor. And when you consider its price of Rs 4,999, the Noise Shots X5 is easily a bargain for those looking to go wireless without losing a substantial amount of cash.

Apple iPhone 13 will not get in-display Touch ID