Projector in my palm!

The M1+ belongs to a new generation of projectors that use the shrunken version of Texas Instruments' Digital Light Processor (DLP) technology.

When it comes to watching movies. I must confess to a secret and hitherto unfulfilled wish. Multiplex rates have kept me out of theatres for some years now; I do my cinema watching on the TV -- and if desperate, on a tablet or phone. The latter I can do in bed, but there's the rub: you sacrifice much of the experience on a tiny screen. How great if I could watch a movie lying down, with the action playing out on the ceiling so that I get a B-I-G image without having to suffer a crick?

My prayers have been answered. I have been trying out the Viewsonic M1+ultra-portable LED projector -- and its 360-degree rotatable stand lets me project a 100-foot diagonal image on the wall -- or on the ceiling as I lounge luxuriously on my bed. The M1+ belongs to a new generation of projectors that use the shrunken version of Texas Instruments' Digital Light Processor (DLP) technology, combined with an LED lamp to create a portable, palm-sized, battery-operated multimedia device. You can use any one of five input options -- HDMI port, USB stick, Type C USB, micro SD card -- and additionally in the Plus version of the M1 -- wirelessly via Bluetooth from your phone. You can use it while connected to the mains, using the cable provided, but that would be so un-cool in this coolest of projectors. The smart thing is to charge the built-in battery which is good to go for about 6 hours. 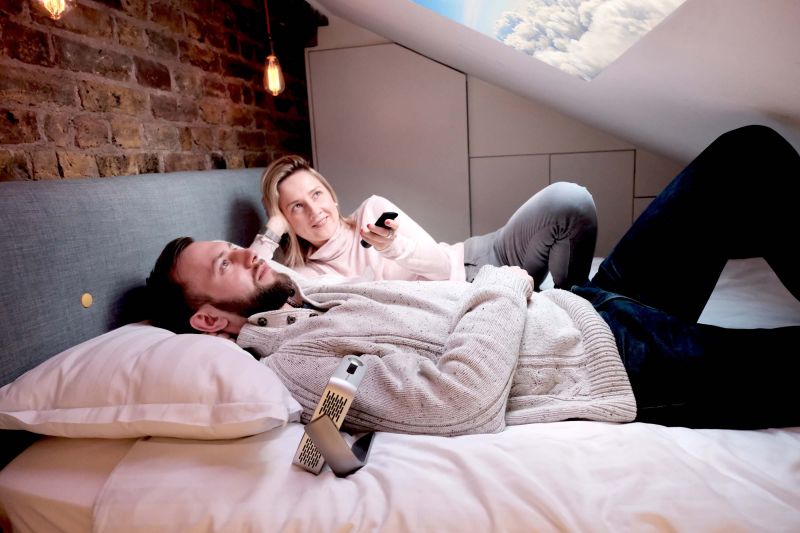 The M1+ comes with a swiveling stand that doubles as a lens cover: when you open the stand, the lamp automatically comes on. All you have to do is to select the source of your video on the remote and your movie will roll. The built-in dual Harman Kardon speakers are good enough for indoors use.

I like the idea that the projector works with just about any file format: MP4 for movies, MP3 as a music player, jpeg for slide shows, PDFs, you name it. This means for professional users it will also project presentations, literally as you hold it in your palm. The Viewsonic M1+ costs Rs 65,000. Not cheap, I know, but you are paying for portability -- and the pleasure of saying: 'Honey, I shrunk the projector!'