DECCAN CHRONICLE.
Published Mar 2, 2018, 4:26 pm IST
Updated Mar 7, 2018, 8:36 pm IST
If you think you can safeguard yourself from the ill effects of air pollution by staying indoors then think again.

Pollution on earth is increasing and humans are totally responsible for every part. Be it noise, water, soil or air — we are all hands-in-glove that is soon moving Earth towards being a non-habitable planet. While most pollution can be contained, air pollution is one area that needs serious attention. World over, nations and governments are trying their level best to find solutions and cut down on every element that causes air pollution. Though air pollution cannot controlled as easily and quickly, we humans can at least take care of what we breathe, if not outside, at least at home and office.

If you think you can safeguard yourself from the ill effects of air pollution by staying indoors then think again. While does have a choice to choose drinking water, we don’t have any choice with regards to the air one breathes. The air quality and pollution in the air is completely dependent on the surroundings one lives in.

Dangerous. Hazardous. Apocalyptic. These are the words some environmentalists use, and we can say the same about the air inside our homes too. The Air Quality Index outdoors has reached dangerous levels of over 1,000 and till date, it hovers around 400 mark, which is considered to be unhealthy.

The myth that capturing ourselves indoor during the high level of pollution also needs readdressal as indoor air is usually dirtier than the air outdoors, due to trapping of air contaminants inside. Women and young children as they are most likely to stay indoors for longer durations. Prime pollutants responsible for degradation of indoor air include PM (particulate matter) 10 – like dust, soot pollen and PM 2.5 and if exposed for a longer duration may inflict serious health hazards. Measuring less than 2.5 microns, fine particulate matter (PM 2.5) can enter the bloodstream and settle in the lungs, which can lead to cancer of larynx, nasopharynx, lung, and leukaemia, cardiovascular and respiratory illnesses like acute respiratory tract infection and COPD.

So what do you do in such a case? Deploying an air purifier is probably your only option.

Numerous air purifiers are flooding the market today. While many come with a price tag which could probably make you think twice about owning one, the important decision of owning one should not be the cost, but should be the effective one. 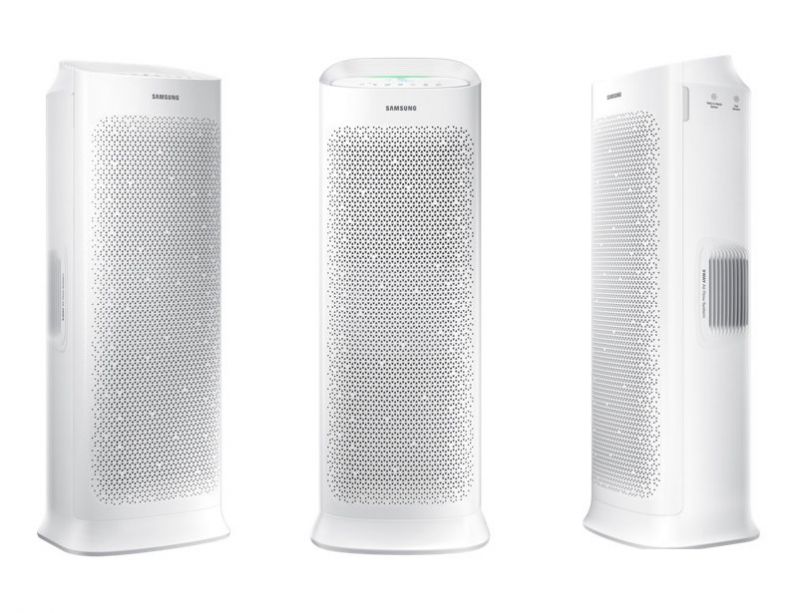 Samsung, the well-known home appliance maker, released the AX7000 air Purifier last month. The unit is a huge tower (not as huge as we sounded) that promises to work silently in the background while still protecting you and your family from the threats that come in because of polluted air.

The AX7000 Air Purifier is a tall, standalone air purifier that can help you clean out the air within your home. It uses a HEPA Pro Filter and works for an affective area of 93.1 square-metres — which averages out to around a 1,000sqft room. 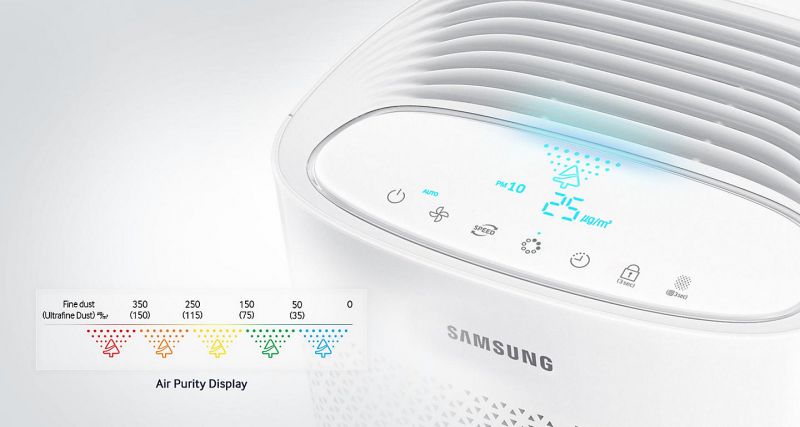 Standing tall at 3.5ft and around one foot in width and depth, the AX7000 is a tiny little giant that can stand still on one corner of your room and remain unnoticed. Built completely of a plastic exterior with perforations up front, the AX7000 is a quiet performer. It can keep the decibel levels as low as 53dBA in quiet mode where it silently does its work. Internal sensors can detect the pollution levels and the unit can pump up its performance to high-speeds in a jiffy. 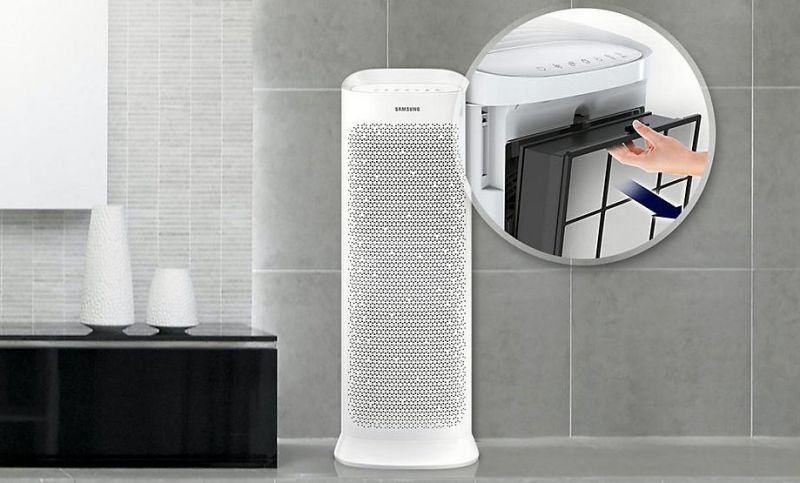 The top panel is the main business end — a large touch-based control panel with a few LED indicators are placed on the lower half of the face, while the other half is a vent that lets out the pure air.  The control panel consists of a power button, fan speed, a few indicators, timer control and child locking. Towards the top are LED indicators that informs the user about the air quality around the house. The indicators are both numeric and coloured dots individually, and they help denote the air quality index even from afar. For example, the unit can sense and inform the user of the PM levels (PM2.5 and PM10) and put out a number to it or help the user make sense with a set of coloured LEDs.

So if your air quality is bad, or your indoor air is heavily polluted, the colours turn red. And if all clean, it turns blue, gradually from red to orange, then green to blue. So if your air has smoke, or ultrafine dust, it turns red. PM350-250 makes it highlight an orange colour. Between PM250 and PM150 it turns yellow and green for PM150 to PM50. And if everything seems clean around, the LEDs shine blue, letting you know that the air is pure within the room. 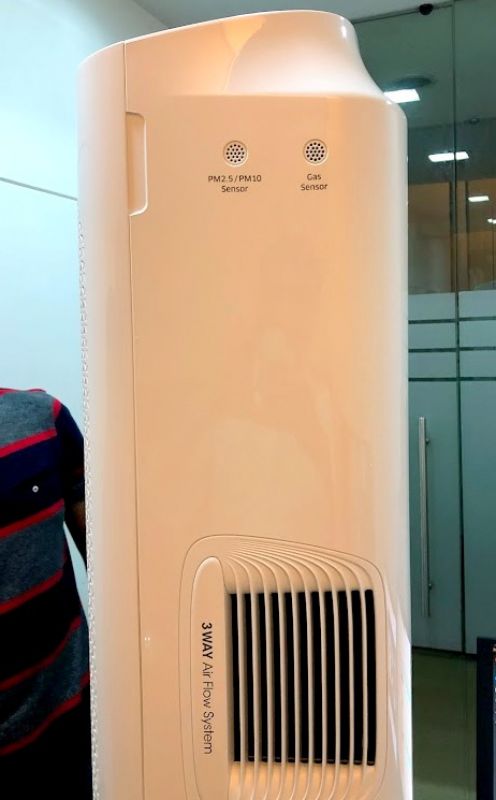 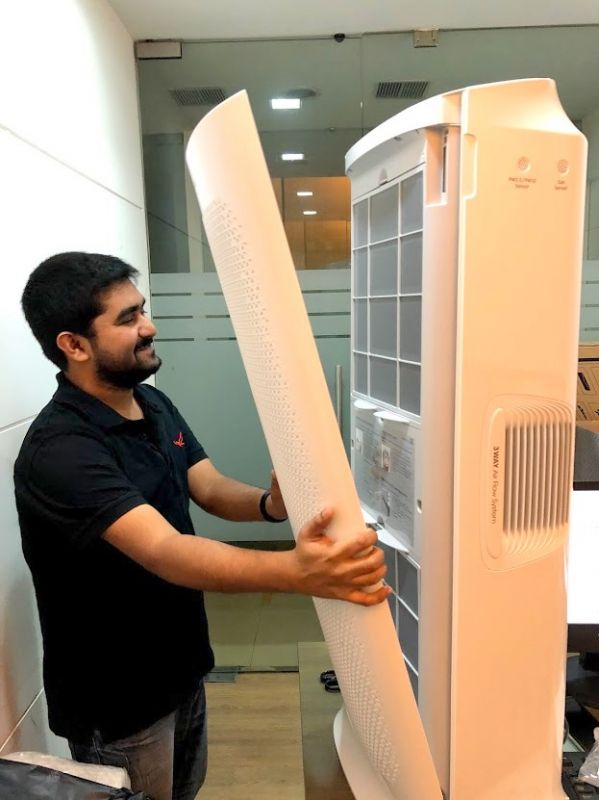 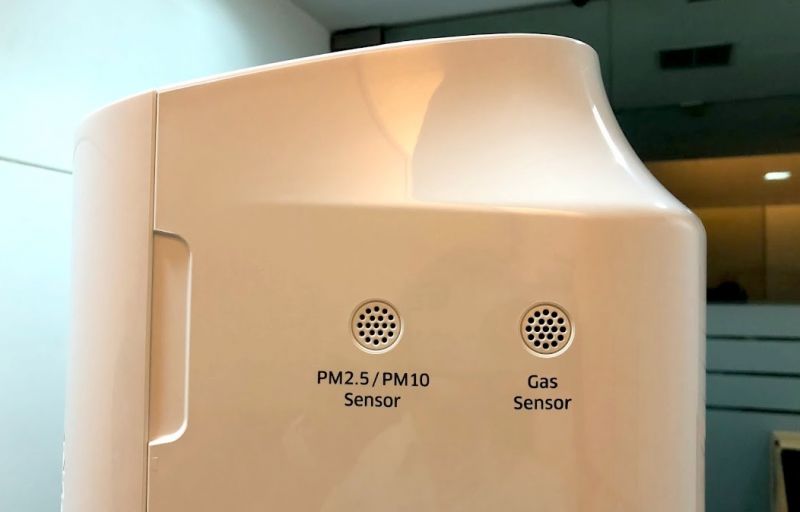 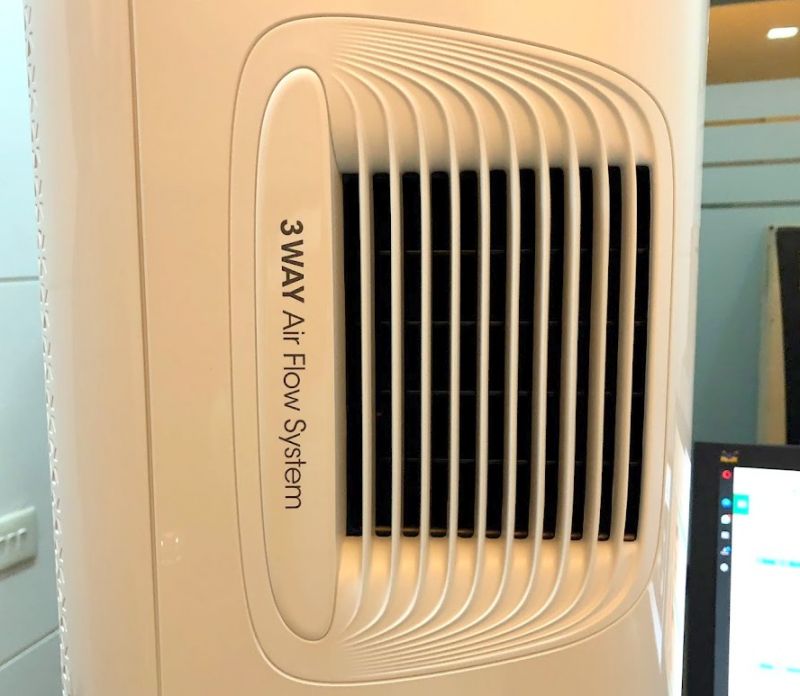 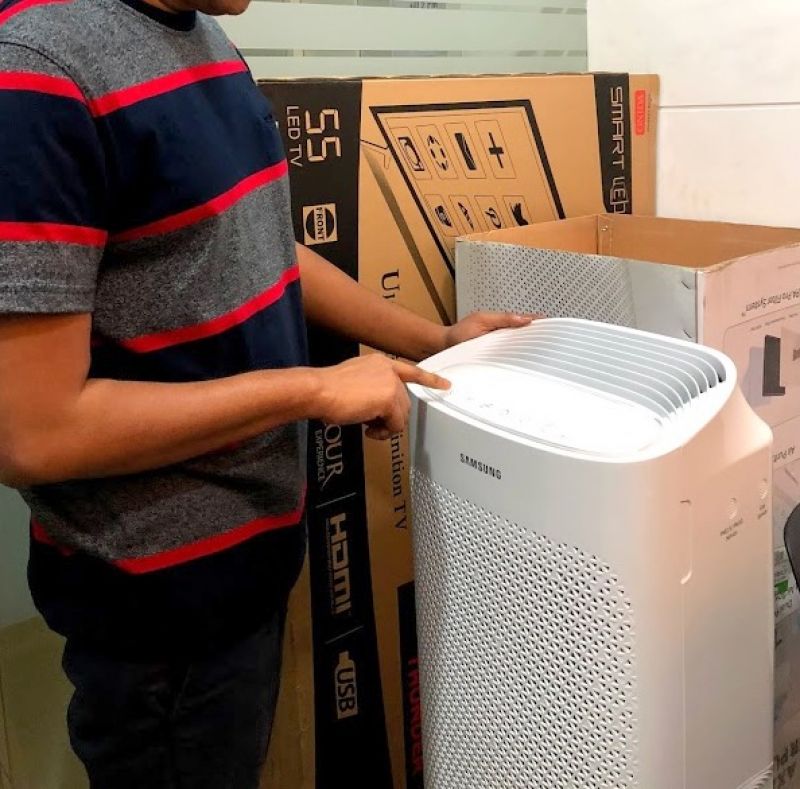 The rear panel has nothing but a simple handle for transportation. However, the single handle makes it inconvenient for a single person to move it around — Samsung should have (at least) given a second option. But this unit is not meant for portability — it is meant to lay serving in one given place. Do note, the unit weighs in at a good 15Kg.

The two sides have vents that let out fresh pure air too — but they are tiny slits in the centre. The right side has two coin-sized rounded grills that have sensors behind it. The two grills are capable of checking the pollution levels in the air and presence of gas leaks — so make sure they are always clean and unobstructed. 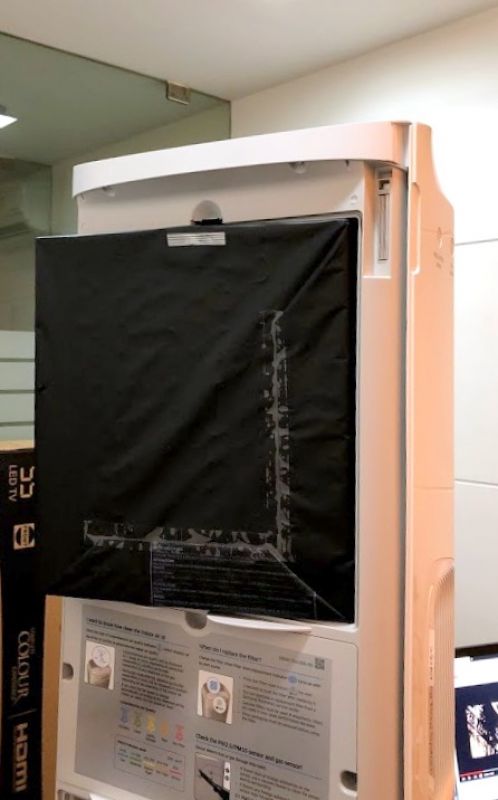 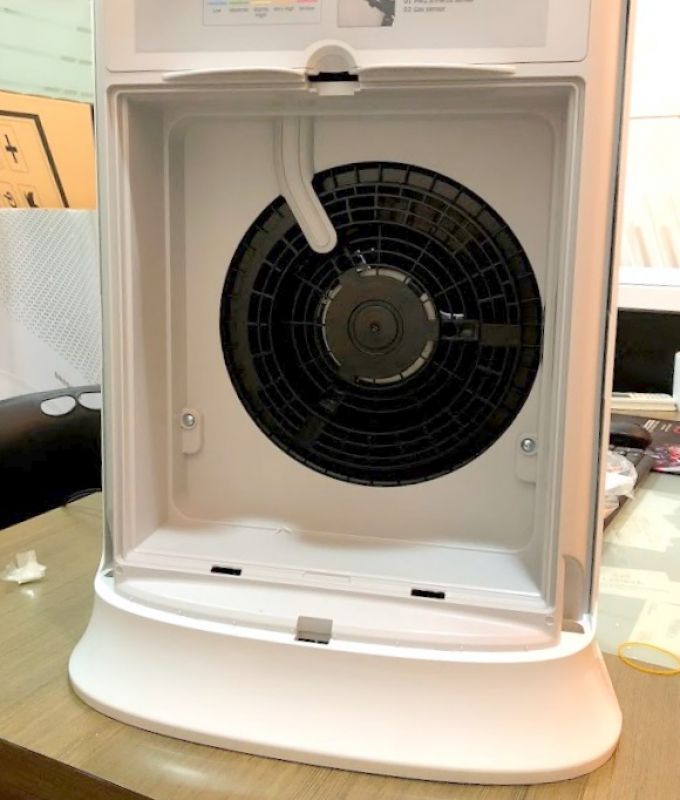 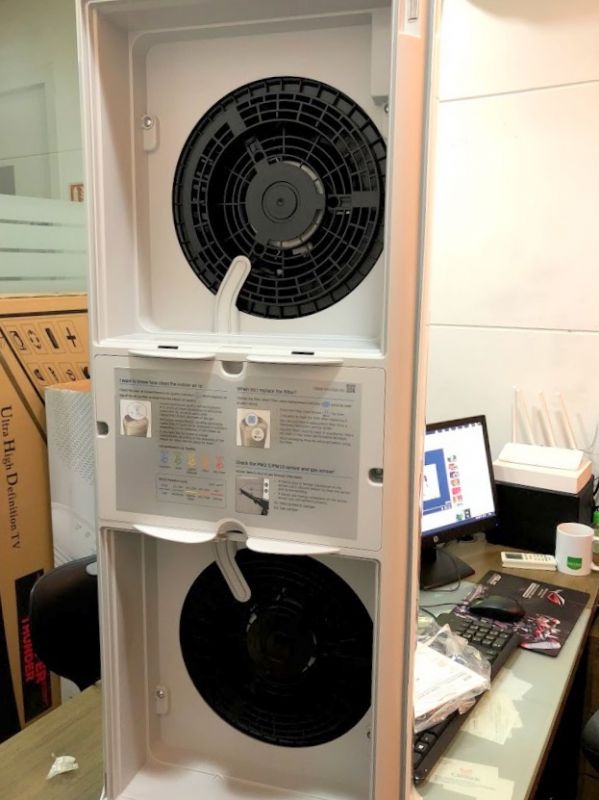 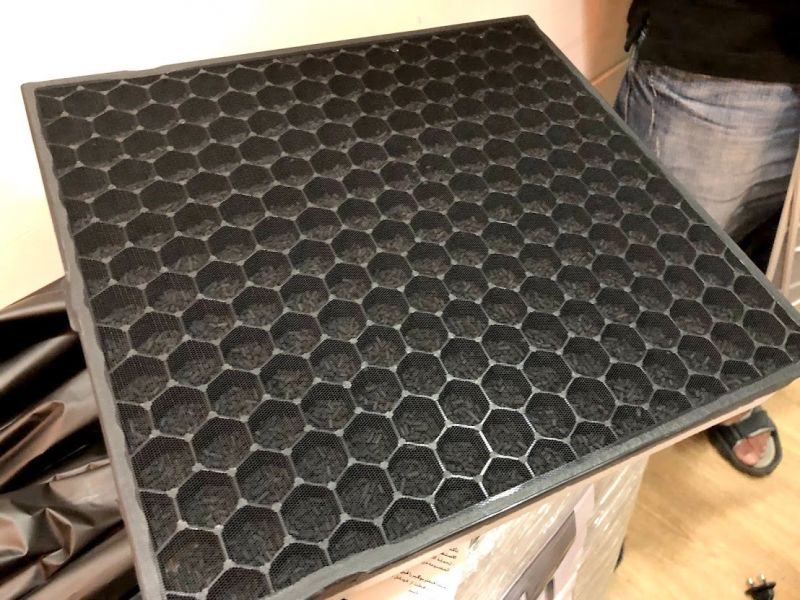 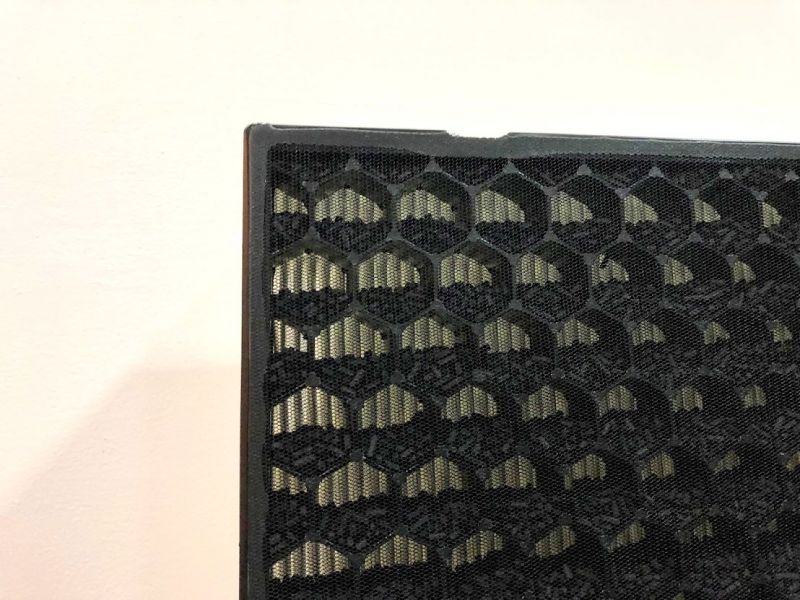 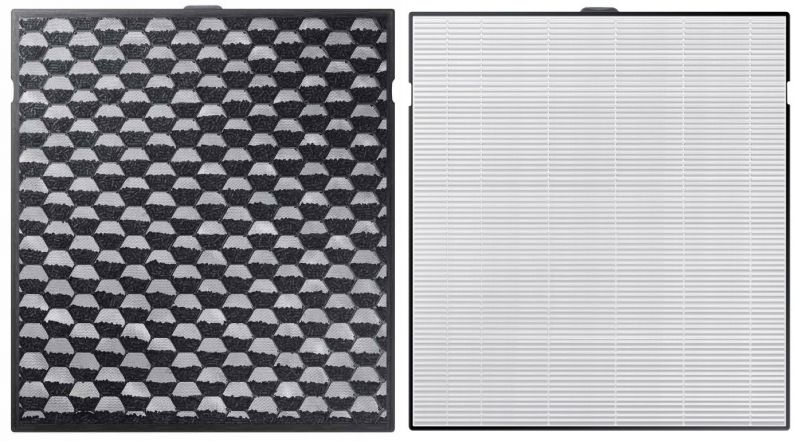 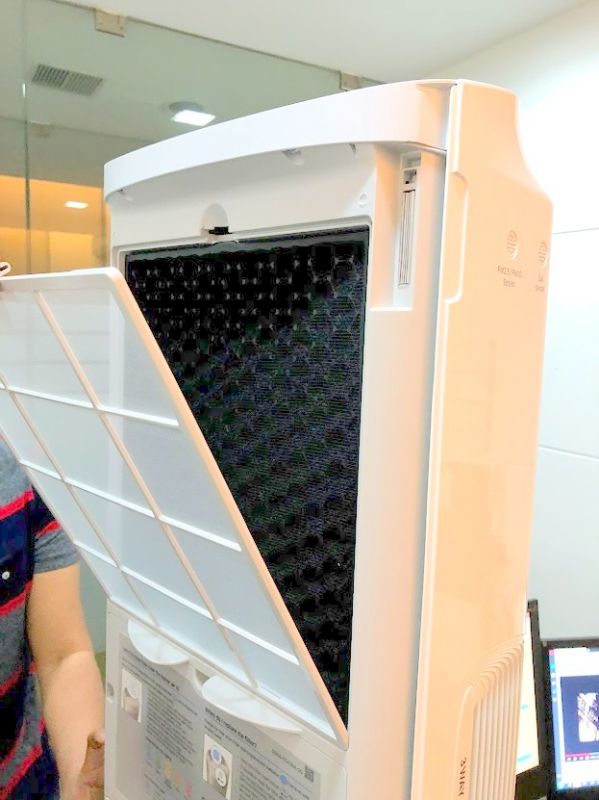 Lastly, the front panel is a completely removable door with perforations that let in air from upfront. The door is held on with a pair of magnets for easy removal to replace the two HEPA filters behind it. Yes — Two. While most air purifiers feature a single filter, the AX7000 has two units working harder and sharing the load for a faster deployment and filtration of the bad air.  Dual fans with 4-step filtration systems are residing behind that front door and these, along with intelligent sensors and circuitry make up the heart of the AX7000. 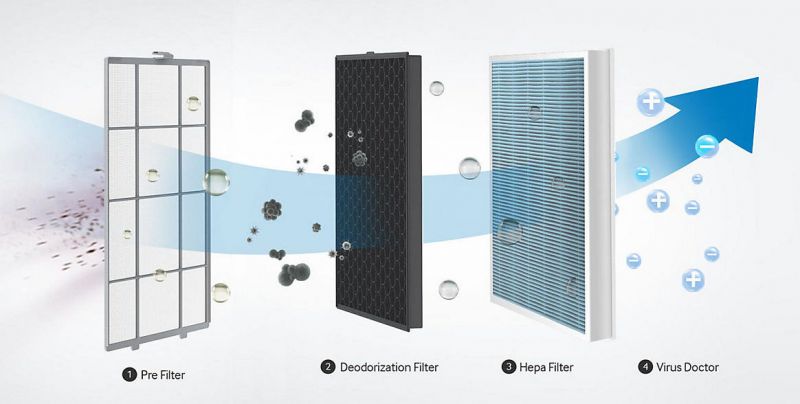 The HEPA filters have a four-step filtration process. It claims to remove up to 99.9% of ultrafine dust and harmful gases and eliminates up to 99.7 per cent of harmful viruses and allergens. The HEPA filter contains a pre-filter to block/filter out larger particles such as visible dust, hair, and anything that is visible to human eyes. The second layer is a deodorization filter that removes any odor from the intake air. This filter consists of active carbon that is known as the best deodorization agent till date. Next comes in the paper filter or the main HEPA filter. The pores in this specially designed paper are so fine that they can only allow dust particles finer than PM2.5 and nothing larger than that. Lastly, a virus doctor, at the end of the filter, is a type of an ionizer that helps attract anything below that, apart from releasing ions into the air. 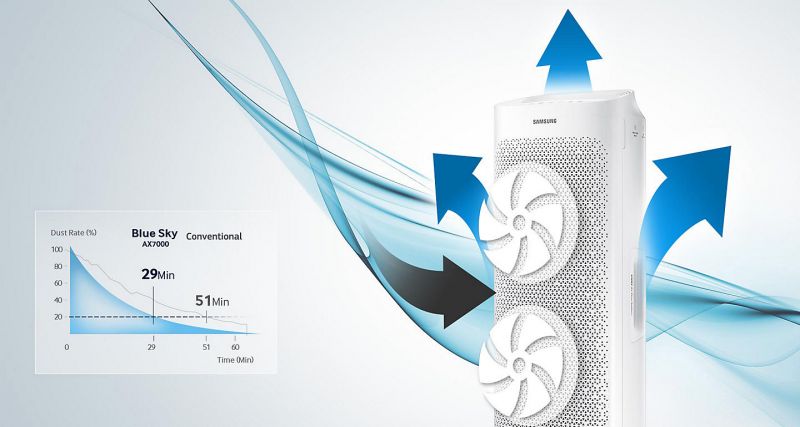 The filters are very easy to remove. Simply lift off the front door and pull out the two filters. Do note, these filters are not serviceable and have a period of life — usually around 3 – 6 months depending on the quality of air around the unit being used. If your area of use is very dirty, you would be heavily spending on replacing the filters almost every month. Each filter can (on average) last around 6 months and need to be replaced by new ones. Each filter costs around Rs 3,500. 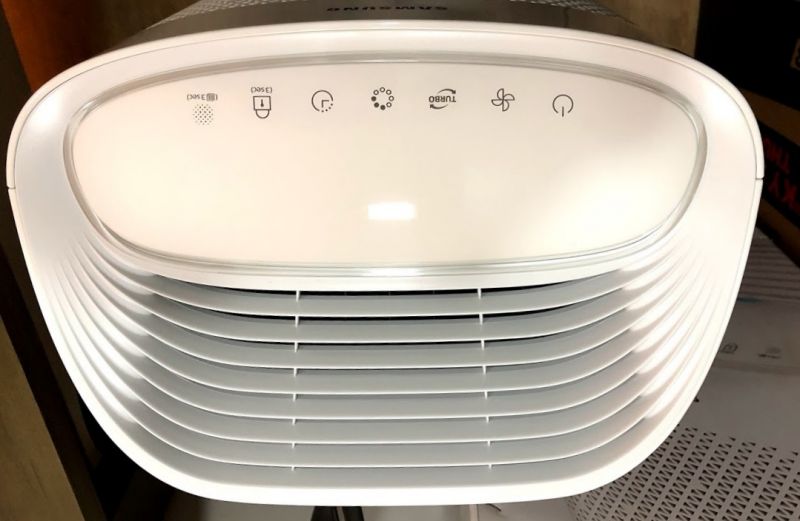 Lastly, the filters cover a channel that sucks in air from the filters. The channel ends to two massive and powerful DC fans. Samsung claims that the AX7000 is highly efficient in terms of purification and noise. Super Low Mode senses the pollution level and automatically adjusts the power to minimise electricity use and cost. Sleep Mode works softly and quietly, while Speed Mode powerfully refresh a room at the maximum power for 30 minutes. 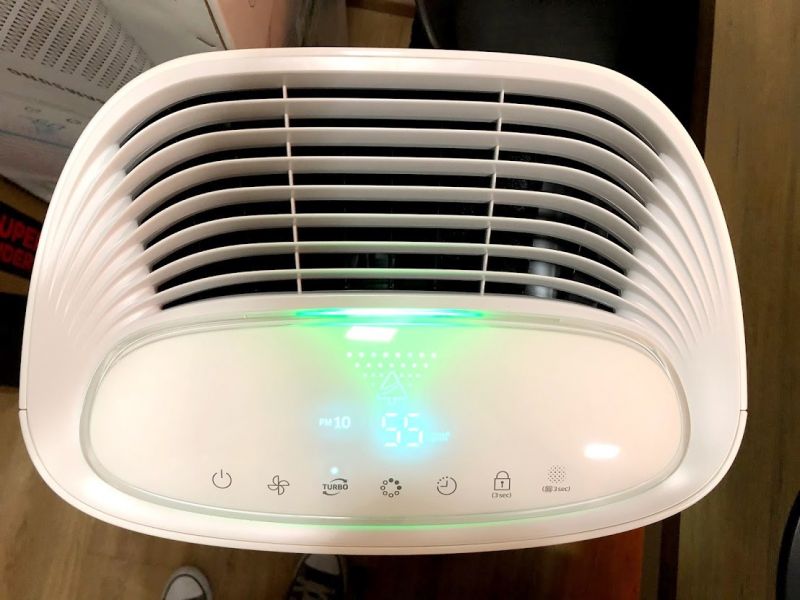 There is nothing much to test in an air purifier, but you will know when you feel fresh and happy your air purifier seems to be doing its job at best. As for the usability, it seems easy to operate, but first time users would need a manual as the control panel is not completely self explanatory. Buttons have logos, but are not marked with words that could help tech noobs. Operating the units is actually simple though. All you need to do is simply turn on the machine and choose the mode between auto, high, medium, low and sleep. High should be used when you sense that your room is stuffy, and low/sleep can be used for when the air quality is not alarmingly high. Lastly, Auto mode can save you from that hassle, and is possibly the best used mode out there. Sleep mode will simply run at ultra-low speeds to keep the fan noise levels down.

Maintaining the air purifier is probably very simple. While there are no user serviceable parts within, all you need to do is keep the exterior happy and keep replacing the HEPA filters in time. However, keeping the exterior may not seem as simple 3 being white in colour, you could find the glossy smooth and white exterior looking pale and old should it get touched multiple times by greasy palms or cleaned with a wet cloth. Having a front-mounted filter, the air purifier does not need moving it aside or forward for replacing filters. The slim design makes it easy to operate and maintain.

We noted that the AX7000 is meant to be put on and left aside. There is no interaction needed till it’s time for a filter change. However, addition of a few more connectivity and control options could have helped further. A remote control could have helped, while a smart network could have made it the best out there. Wi-Fi connectivity along with a smartphone app would have made justice to the AX7000. The user could have complete control of the unit, while he also gets timely alerts of the pollution levels at home and filter life. Alarms in case of gas leaks would have a bigger advantage. 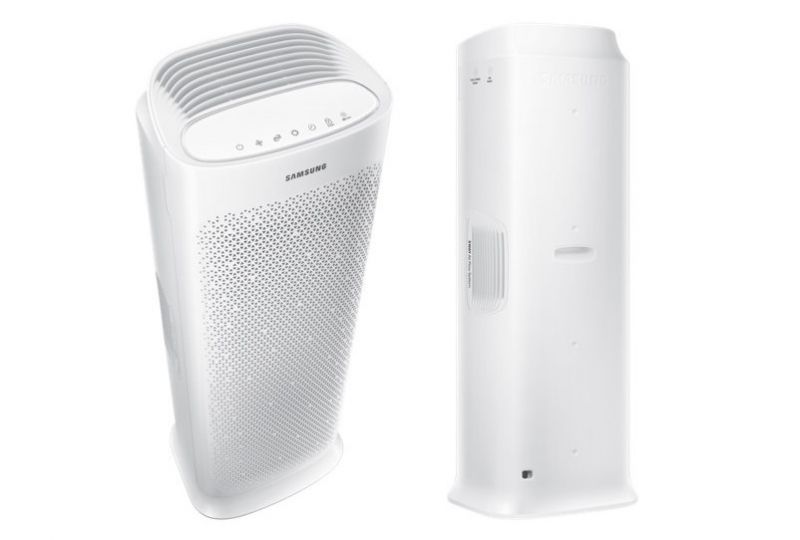 All in all, the Samsung AX7000 Air Purifier seems like a decent package in what it offers how it performs. However, for the price of Rs 42,000, we feel it's a bit steep for a common man to accept this as an important future household appliance. If you are looking for a smarter air purifier, there are others in the market. However, since this one is smart enough to handle your impure indoor air on its own, smart air purifiers can offer nothing more than just remote control and monitoring alerts.

Should you buy one? If you can afford it, we would say 'definitely' — with Samsung’s after sales backing and a quality manufacturing, this air purifier will surely do a job well, for years to come.