Located on the northern tip of Kyushu, the southernmost of Japan’s four main islands, Fukuoka is historically split by the Naka River between the castle town of Fukuoka and the merchant quarters of Hakata.

For most tourists, Fukuoka does not figure in their original itinerary. It was supposed to be just a stopover before continuing to the glitzier Osaka. But our travel plans drastically altered the minute we stepped out of Hakata station. In this part of Japan, the weather and people were warmer than most other cities and despite being a humungous metropolis, it lacked the hurried pace and had an easy-going vibe. 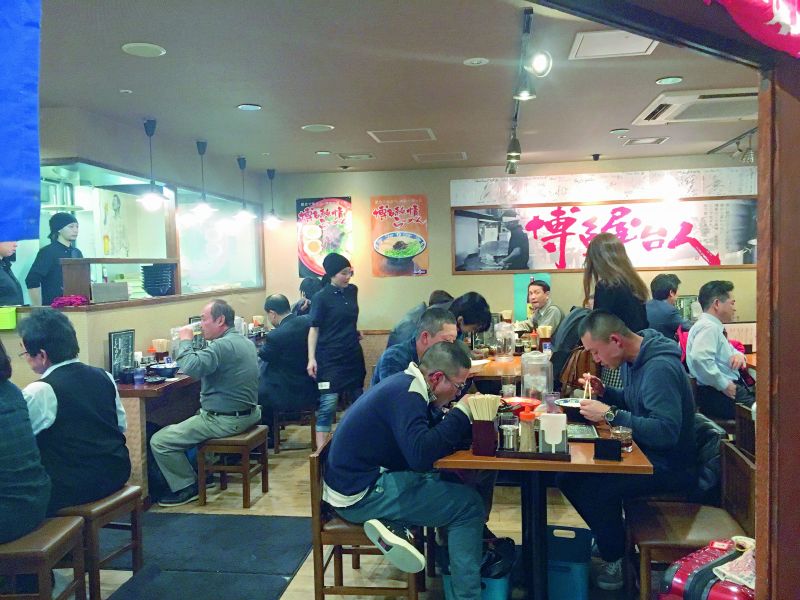 Locals eating out at a resturant.

Located on the northern tip of Kyushu, the southernmost of Japan’s four main islands, Fukuaka is historically split by the Naka River between the castle town of Fukuoka and the merchant quarters of Hakata. The two cities merged into one in 1889 and today, past and present co-exist peacefully and hidden amidst the modern precinct with chic boutiques and arcades, are a series of timeworn temples that reveal the history behind Fukuoka’s cosmopolitan facade. 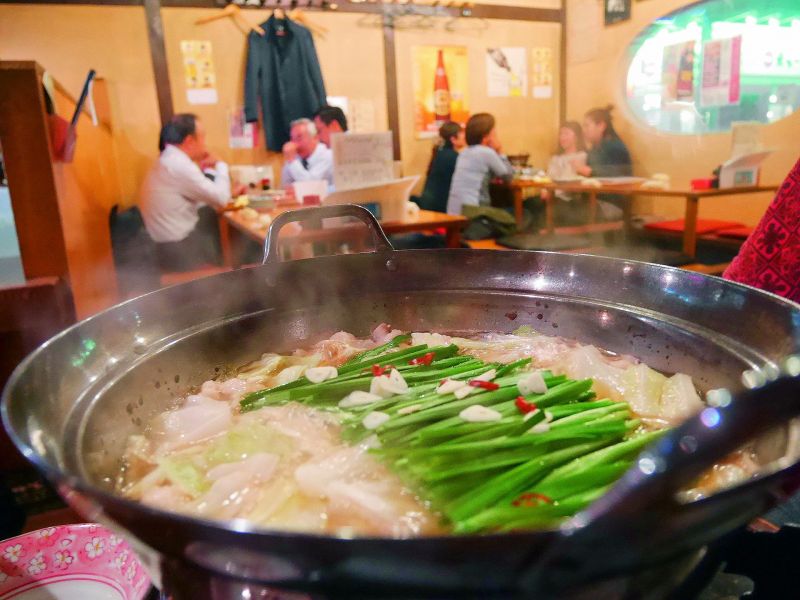 Our first stop was a visit to one of the mobile restaurants near Naka River. After a few minutes wait, my husband and I squeezed onto a bench and into each other at a makeshift stall — separated from the rest of Fukuoka by just a plastic curtain. Our actions were hardly romantic as we attempted to find space among the 10 other diners, mostly locals, around the u-shaped counter.  But it was worth the jostle as the familiar aroma of tonkotsu ramen broth (noodles in pork bone soup) wafted from the bare-boned kitchen behind the counter. As the last rays of the sun faded out, locals lined up near the dozen other neighbouring  yatais serving ramen and sticks of yakitori (grilled meat).  The Yatais came into existence post the Second World War, as they lit their red lanterns and welcomed patrons with their comfort food offerings. And to this day, this form of al-fresco dining is considered a quintessential Fukuokan experience. Based on our first meal in this tiny stall, we can safely vouch for the fact that one of t
he best ramens in the world can be sampled in this canal city. 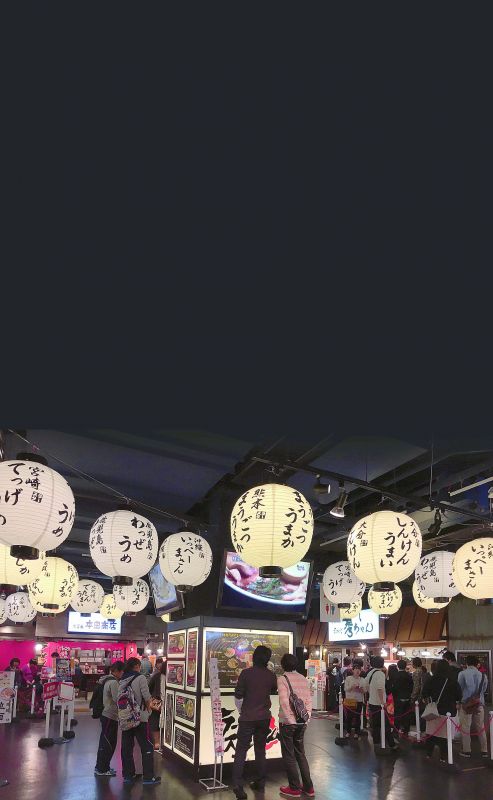 The next day, we decided to explore Taihaku-dori Avenue, a few minutes away from the Hakata train station. With eight lanes, this is one of the widest streets in Fukuoka City and is lined with as many as a dozen historical monuments on either side of the road. Our first stop is Jotenji temple, one of the meticulously preserved wooden temples, built in 1242 by a Chinese merchant. 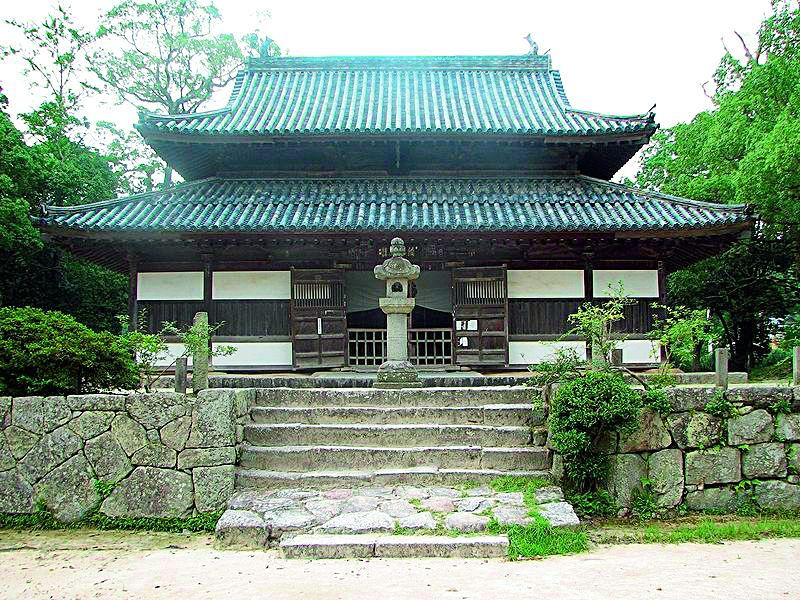 Around the central temple are a series of shrines set amidst the rock gardens.  Across the road is Tochoji temple, dedicated to the Buddhist saint Kukai who built it in 806 AD and houses a seated 33-feet-tall wooden Buddha. As we stand admiring the statue, we spot people entering a small door to the left. Intrigued, we follow. It is a trip through the ‘Hells of Buddhism’ where one can view the coloured reliefs of unfortunate souls burning in hell. Guided by the railing, we walk through the dark curvy passageway and emerge before a painting of three Buddhas, symbolising paradise.  But the most historic building in the city is the spectacular Shofukuji, the first Zen temple built in Japan, on which the others were modeled. Revered Zen Master Yosai who oversaw its construction is also famed for introducing tea to Japan.

Following a walk to the nearby temples, we were recommended a meal at Tetsunabe, a home-style joint known for their delicious gyoza. Not far from Hakata Station, this restaurant is also an ideal place for people watching as it is located at a busy junction. Gyoza or dumplings originated in China and Fukuoka, being a commercial port, was where the dish was first introduced to Japanese. The tetsunabe (iron pan) gyoza, with fillings varying from pork to chicken, is most commonly served in Fukuoka and is considered one of the best in Japan.

After spending an hour at a local coffee shop, watching the world go by, we walk towards Oyafuko Dori or the ‘Delinquents' Street, in the older part of the city. In the early nineties, the thin stretch was lined with prep schools and later became a centre for the Mentai rock movement. Today, the lane is populated with nightclubs, bars and karoke joints but the neighborhood’s embedded history and unique culture ensured that the original nickname remained. After having a drink or two at an Izakaya (traditional pub), we head back to the hotel and as we leave Oyafuko Dori behind, we can still feel the steady pulse of Fukuoka in this old city neighborhood.

After walking around Hakata Canal City — the largest mall in Japan housing five floors of shops, multiplex cinemas, hotels, an amusement park and an abundance of overhanging vegetation — we decide to head straight to the fifth floor to accomplish our motive of visiting this commercial urban monstrosity — a visit to the Ramen Stadium. Much like a food court, Ramen Stadium comprises eight restaurants, each boasting a different flavor and style of ramen from across Japan. At the entrance of each is a machine where you place the order and wait for your turn. The names are in Japanese but the price is in English. We selected a ramen noodle broth and are soon we were assigned a corner stool with a counter when our order arrived. What distinguishes Fukuoka’s noodles from elsewhere is its thinness. A typical bowl of noodle soup is usually topped with a couple of slices of meat, mushrooms, spring onions, pickled red ginger and seaweed. For those gastronomes keen on extra seasoning, at arms length was toasted sesame seeds and garlic and a couple of sauces. Typically Japanese, the noodles were firm, pork was tender, the broth was flavorful and the egg when separated from middle revealed a golden belly. And like the rest of the diners at the restaurant, the background score we generated was that of slurping, considered a sign of appreciation in Japanese culture.