The mystical land of Khajuraho

A United Nations Educational, Scientific and Cultural Organization (UNESCO) world heritage site, Khajuraho’s remarkable temples were built between the 9th and 12th centuries by the Chandela dynasty. It is these temples that are the highlight of this town, which is a mix of tradition and modernity. “But why are these erotic sculptures placed in a temple, a holy place?” is something every tourist asks on his/her arrival. Our guide Brijendra Singh, known as Mamaji to the locals, has an answer. The 72-year-old is locally known as a walking encyclopaedia on the divinity, and modernity of India’s culture, which was well ahead of its time. He sends us on a hunt as we reach the eastern side of the temples on the first day of our journey. “Go and look around and tell me what you notice,” he says. 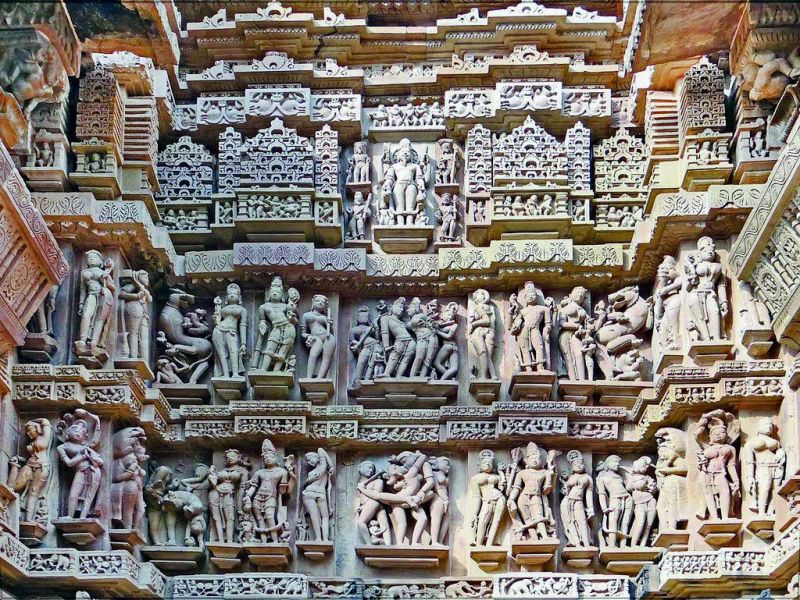 We admire the marvellous structure, revel in the detailed artwork and stop at a structure of a half man and a half woman. It is an intricate work of art, signifying how a man and a woman are incomplete without each other. “This is Khajuraho and this is the real India,” Mamaji explains. “This image depicts the evolution of mankind and the pure union not only of bodies but of the soul. When God created man, he made him physically powerful and gave him a lot of attributes that made the man proud of himself. Then came the woman: delicate, beautiful and not as powerful as man in physical attributes.  That boosted man’s ego, but nine months later when the woman brought life into this world — she converted the man into a baby — the man bowed down and respected her prowess. We always identify man as the body and the woman as its soul. And this is the beginning of Khajuraho and its temple carvings,” he adds.

There are many hidden treasures like these and Mamaji revealed some of those from his “shatabdion ki kahaniyan” (age-old stories). The western group of temples, in particular, are the grandest. The Lalit Temple View hotel offers a grand view of the structures against the morning sun that one can enjoy with the sumptuous meals that are a speciality in Khajuraho. Pyaz ki kheer, bundelkhandi thali, drinks made of green chilli and cucumber, vegetables and fruits grown in their farms, the chefs here make an extra effort and every meal is a delight. Our next stop is the magnificent Raneh waterfalls, and the view here is breathtaking. One can sit for hours and soak in the beauty amid the backdrop of running water.

Khajuraho ranks high in the bucket list of many foreign tourists. “The temples are majestic,” said a lady from Argentina, who was travelling with her daughter. “It is this that we come to India for. It is a different world and provides an insight into the country’s rich history.” Interestingly, while it is hard to find shops in Khajuraho if one wants to buy day-to-day bakery items, snacks or even a soft drink, there are plenty of stores displaying silver jewellery and handicrafts — some of them are even world famous and their merchandise is shipped across the globe. “We may not be very advanced here,” says Mamaji, as he takes us to the well-known Raja Cafe for a hot cup of masala chai. “But Khajuraho does have its place in the world map.” The city is now preparing to host a seminar in the run-up to the BRICS International Summit, and is looking to welcome delegates from across the world. One takes a lot back from here.