A city of history and warmth

Hopping on a Flixbus from Zurich, headed for Vienna past a fairyland of snow-covered towns across the Alps was the first part of this two-day trip to Vienna, solo. The snowflakes silently sprinkled the journey as snow trucks incessantly cleared the road; it was the heaviest snowfall in years in the month of May! And brrr-ing cold, but beautiful. Entering Vienna, it endeared itself to the solo traveller, with the smooth functioning of trams, metros and buses. With a two-day travel pass for 11 Euros in hand, I headed to the AirBnB with the sunny gorgeous Vienna in store for me. The first trip was the Good Vienna Walking tour with our Czech guide, Lada, who was a storehouse of knowledge and humour. Even as the few solo travellers strayed towards each other, an Egyptian, a Venezulean, we walked the cobbled streets where the Habsburg ruled in a city often thought of as the best place in the world to live. We ambled past the home of Mozart under sunny skies. Surprisingly, it is a mall now, as the family fell into bad times. The rich heritage of the city follows you. Aptly called the city of music, the rich historical heritage has its hubs in the Schönbrunn Palace, City Hall, Austrian Parliament, St. Stephen’s Cathedral and Hofburg Palace — guilded columns, beautiful sculptures and historical walks are de riguer. 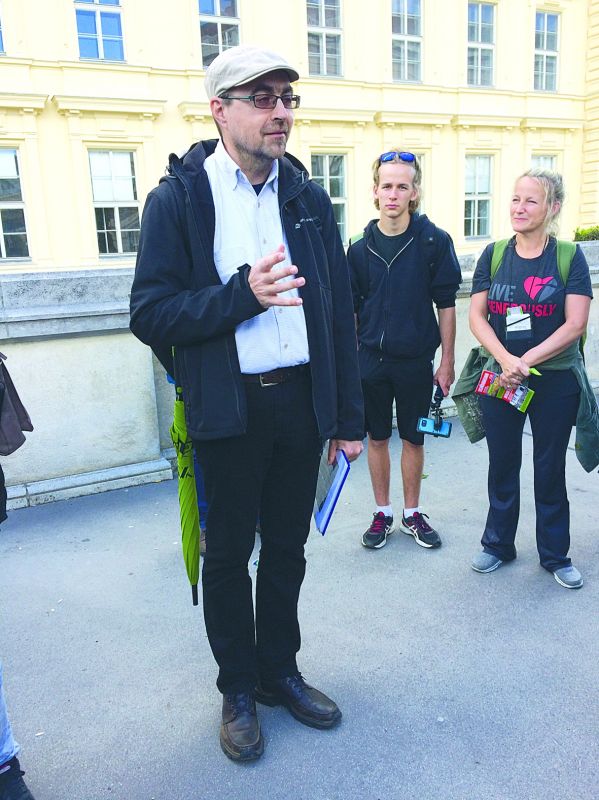 We walked past the exquisitely architectured parliament and spotted the Spanish riding school where the famed Lipizzaners live in luxury. The horses were gorgeous creatures primed and combed every day, in luxurious living quarters. The guide informed us that there are training sessions on their website to be a part of this graceful trot and amazing Lipizzan ballet. We couldn’t help but tiptoe enviously into their stables, in wonder. Trotting on the cobbled street, we passed a grey building where Sacher Café at the Sacher Hotel still dishes out Sacher Torte from its august beginnings when in 1832, Prince Wenzel von Metternich wanted a special dessert and the task fell upon the ill head chef’s 16-year-old apprentice, Franz Sacher. His eldest son continued this legacy where a delicious chocolate and apricot jam pastry became a Viennese delight. Today, the “original” has since been packed out by DHL across the world, for 15-odd Euros, if you so desire. 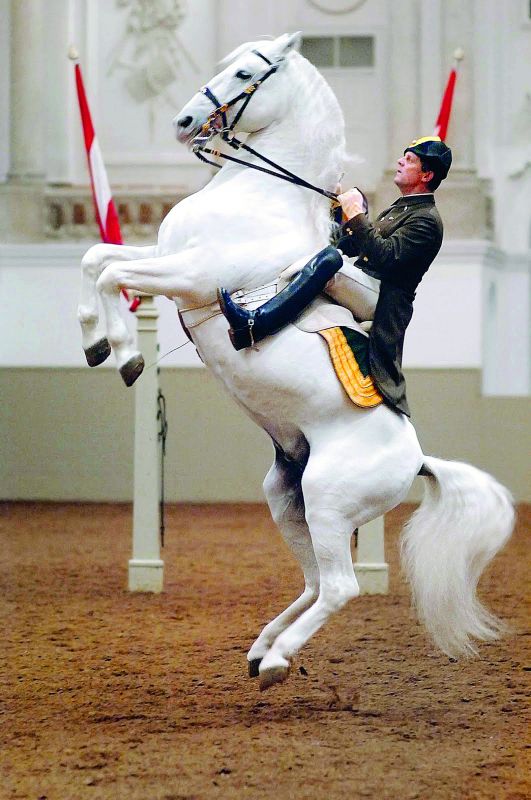 A Lipizzaer with his horse

While on the topic of food, the one thing many might not know is that the Wiener Schnitzel is not an original Vienna dish, but adopted from Milan. We had ours filled with ham, caramelised onions and cheese with the famed potato salad and it was perfect. Vienna is also where the cappuccino originates from, not Italy. The city is known for its Coffee Houses and its culture of coffee. We walked towards the famed Café Central where Sigmund Freud, the father of psychoanalysis, used to drink his coffee, newspaper and glass of water in tow. A glass of water is always served here along with the coffee now in keeping with traditions, since in olden days, the poor, for want of water would order a coffee, and then glug water to keep hydrated during harsh winters. The apple strudel we ordered with its dollop of cream and vanilla sauce was beautiful. But the Sacher Torte came dry, not the original, or let’s just say, we’ve had better.

Getting a little lost in the old quarter, I landed at the Opera House and bought the last ticket (a ploy, most definitely!) to the opera of the day. We stepped into the gilded, expansive and luxurious opera house. Sitting in the box, in a packed house, the story of love, lust and loss filled our senses. The Vienna Boys Choir is also worth listening to, and there are also a number of museums of which the Freudin museum and the Gustav Kilmt museum are must-visits among others. At the end of the evening, a tram and metro ride found us back on home ground, in the BnB. The night was still young, so we took a stroll down the quiet streets among ornamental buildings. The streets all looked the same and we even got temporarily lost but were able to find our way home soon enough. It’s nice to be lost in a new city if people are helpful,  even if that help comes in the form of German instructions.

The next day, map in hand, was a date with the Schonbrunn Palace, another two metro rides away, where the Hapsburg dynasty used to live. We ambled in, marvelled at the magnificent living quarters, the opulence and the art of this 1,441-room Baroque palace as the audio guide took us through each room and parlour. We came across the Millions Room which was ornamentally decorated with Indian art in rosewood. We then walked the vast gardens, mulling over a past and a family of kings and queens as we marvelled at life in another era. Walking back, we bought some knick-knacks at the palace shop. A quick ride on the metro found us back at our BnB once again. All in all, we loved every minute of this city that revels in its history, and its people.