In the land of Dracula

The Bridge of Lies in Sibui

If you have a soft spot for snow-clad mountains, freezing temperatures, and visualise yourself spending your winters in a picturesque environment, then Romania is the perfect country for you. 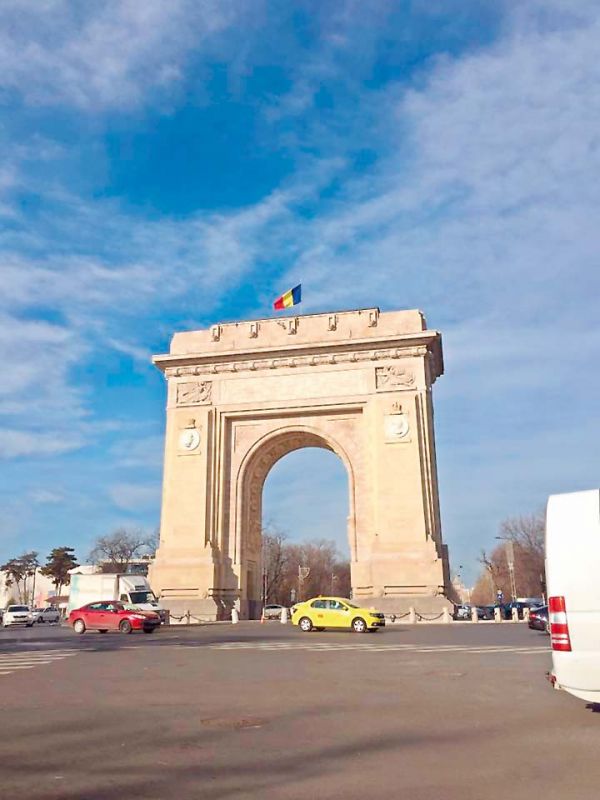 Even the rooftops in smaller towns are peppered with snow, making the landscape stand out like a fairy tale land. While eastern European countries like Croatia have become a huge draw for Indian tourists, Romania,  located in Southeastern Europe, is relatively a virgin destination for Indians. This is why, unlike the rest of Europe, where you will inevitably bump into a desi face at every nook and corner, that doesn’t happen in Romania. Besides the constant curious glances coming your way, one even got asked, “Where are you guys from?” 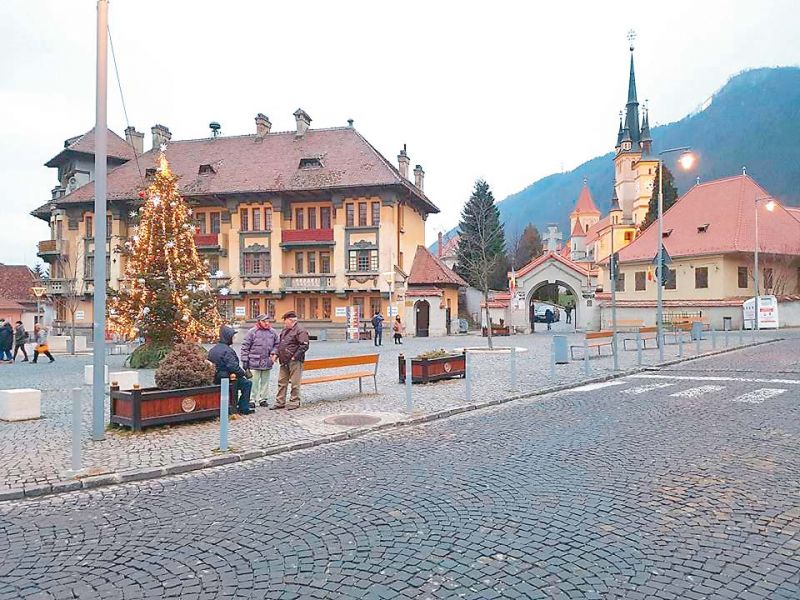 Be forewarned: the Romanians are not exactly the friendliest lot, waiting to welcome visitors with open arms. And communication can be an issue, unless you are staying in a luxury hotel. So, hire a guide to make life easy. We opted for a five-star property in Bucharest, and unlike the rest of Europe, accommodation will not cost you more than 120-150 Euros per night, at a star hotel. Dining out is very affordable, and you can get a good meal for fewer than 30 Euros per head. In Bucharest, we dined at the 125-year-old Neo classical restaurant Cera Cu Bere.  Austrian architect Siegfrid Kofczinsky designed this gothic revival building in 1899. 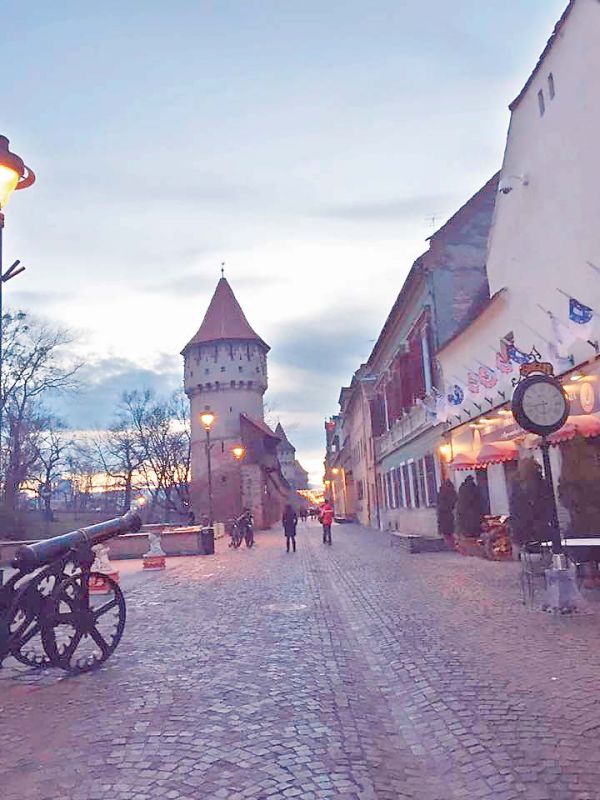 As you savour your meal, music fills the air, a group of young men and women perform a modern dance for guests. The whole vibe is chilled out and feels like you are dining at a friend’s home. 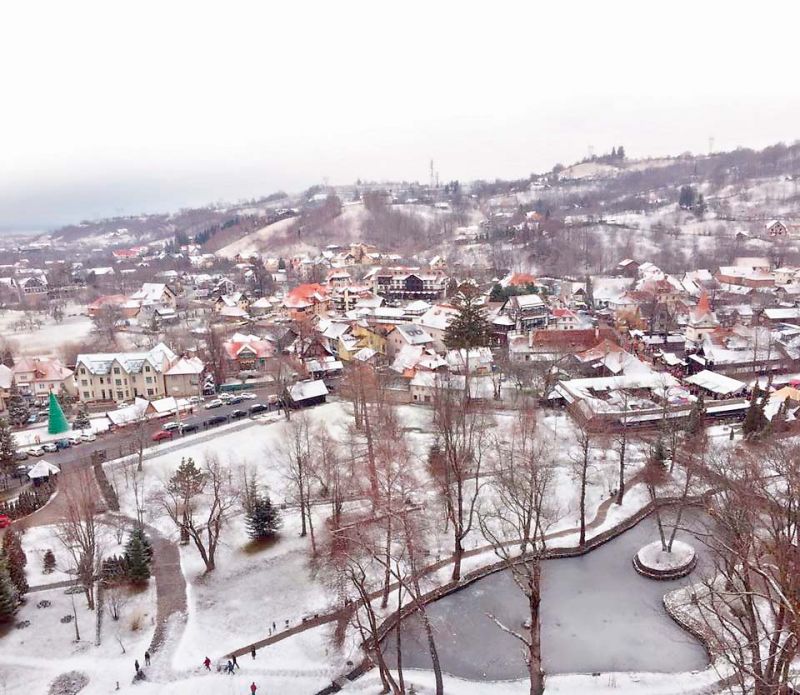 The view from Dracula’s Castle in Bran, Transylvania.

Bucharest deserves the title of capital city with its old world charm, wide roads paved with imposing trees that are deprived of leaves in harsh winter. The iconic Palatul Parlamentului or Palace of the Parliament with its 1,100 rooms occupies the pride of place in the city.

Visitors driving in from the airport will pass the Dimitrie Gusti National Village Museum, which showcases authentic village life, with reconstructs of farmlands and homes from the hinterland. You can spend hours gazing at the stunning architecture here.

Our next halt was the city of Brasov, which is a three-hour drive from Bucharest. It is surrounded by the Carpathian Mountains, and is popular for its Black Church and the Council Square, locally known as Piata Sfatului. This is where the famous Christmas market is set up every year, where little shops are huddled together, and you get everything from fur coats and piping hot chocolate to mulled wine. An oversized, brightly lit Christmas tree occupies that pride of place, and is the prime landmark for visitors who lose their way. Brasov, located in central Romania, is the perfect location from which you can head to other smaller towns like Sighisoara.

In the somewhat remote medieval town of Sighisoara, the birthplace of Dracula, people are not open to new faces. While it would be easy — and somewhat pessimistic — to dismiss this as racism and hostility, one has to understand the country’s background before passing judgment.

Romania was under the iron hand of communist leader Nicolae Ceausescu, who ruled the country from 1965 until he was finally overthrown and killed in a revolution in 1989. Under his dictatorship, the average Romanian had not stepped out of his city, and that hangover from the colonial past still exists. That is why they are extremely wary of tourists.

Maybe it could have something to do with the Dracula effect, because on a shivering *-7 degree afternoon, most restaurants — ironically even our local Udupis are bigger — were shut, save for one, which despite having tables, had an extremely cantankerous receptionist, insisting that there was no room available. She was instantly given a lecture on the importance of opening doors to outsiders, thereby earning revenue, by a rather miffed group member.

The meal turned out to be sumptuous. Mind you, the local cuisine is rather bland for the Indian palate. Their national dish Michi (grilled minced meat rolls), and sarmale (cabbage rolls) are flavourful, but the diet here comprises a lot of red meat (more pork than beef), potatoes and diary products.

But getting back to their attitude, the Romanians pretty much don’t care that despite being one of the poorest European countries, they’re still not open to tourism. Be that as it may, Sighisoara is apt for a day visit as it is just a 1.5 hour drive. The closely-knit, colourful in bright hues (you do find such houses in Goa’s bylanes) houses are eye-catching as is the modernised clock tower, which doubles up as a museum and is the prime attraction for visitors.

The prettiest town has got to be Sibiu, which is a four-hour drive from the capital city Bucharest, and offers you a stunning panorama of the Transylvanian topography, which appears to be straight out of a nature magazine.

Sibiu has a very Florence-like vibe, with cobblestone pathways that lead to the Bridge of Lies, which is one of Romania’s oldest cast iron bridges. According to one legend, it got its name when people, who stood on this bridge and lied, found it moving and making noises.

It also houses some of their trendiest restaurants like the Trip Advisor-recommended Kullinarium and Strada. The food is a mix of European cuisines at most of these places, but the wait can be endless. Europeans take their holiday season very seriously, so many restaurants are short staffed, and there it is not uncommon for guests to wait up to an hour for a meal. Most cafes and eateries face the main shopping area, and going by the high-end brands available, this tiny town is also a shopper’s paradise.

* The average temperature is 5 degrees on most days and even goes down to -7 degrees, so travellers are advised to plan an extensive winter wardrobe and layer themselves well.