Of mountains and wine

True to its name, Georgia is a gorgeous country. I visited Tbilisi, the capital and the largest city in Georgia, with my closest friends. Everything about the city is beautiful — the streets, lively flea markets, jewellery, colourful buildings, fabulous wine, and the genuine hospitality make Tbilisi a hotspot for holidays. The unbelievable cleanliness adds to the beauty of this country. With the best time to visit between the months of May and September, Georgia has something for everyone.  A mountainous country, Georgia stands at the intersection of Europe and Asia, divided into eastern (Iberia) and western (Colchis) halves by the Likhi Mountain Range. The country was a part of the former Soviet Republic that’s home to Caucasus Mountain villages and Black Sea beaches. The deepest-known (2,197m) cave on earth, Krubera (Voronja) Cave, is situated here. 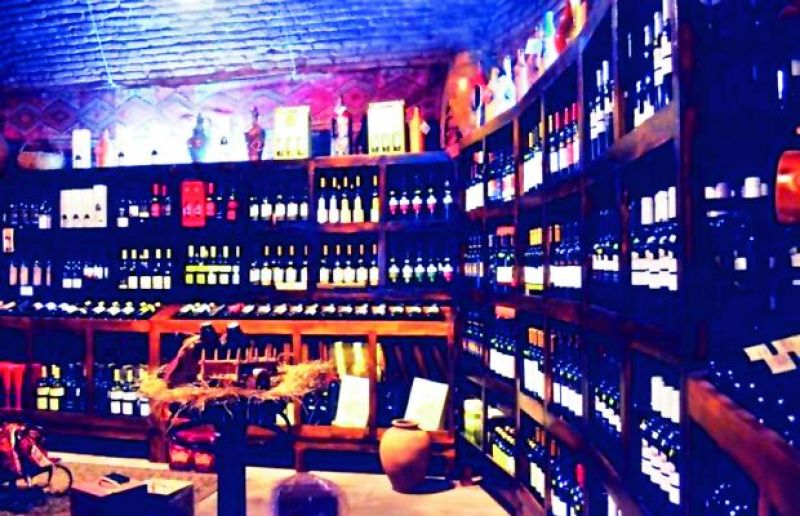 On my first day in Georgia, I arrived at Tsiskvilli for lunch, a very simple restaurant tucked away in old Tbilisi, filled mostly with the locals. We ordered a few dishes from the fabric-covered menu. Little did we know that Georgians don’t eat — they feast! Eating is taken very seriously and it stretches on for hours. Georgia is also known for its freshly baked breads, which is a reason why the country has a lot of bakeries. Our visit to Georgia would have been incomplete without tasting the khachapuri, a warm cheese-stuffed bread. Cheese is a major ingredient in all Georgian dishes. The local cuisine also includes a variety of salad, soups and pizzas. Georgians mostly prefer having some kind of meat in every meal, be it poultry or red meat. The food is decently priced and each meal would range between 6 to 10 Lari. 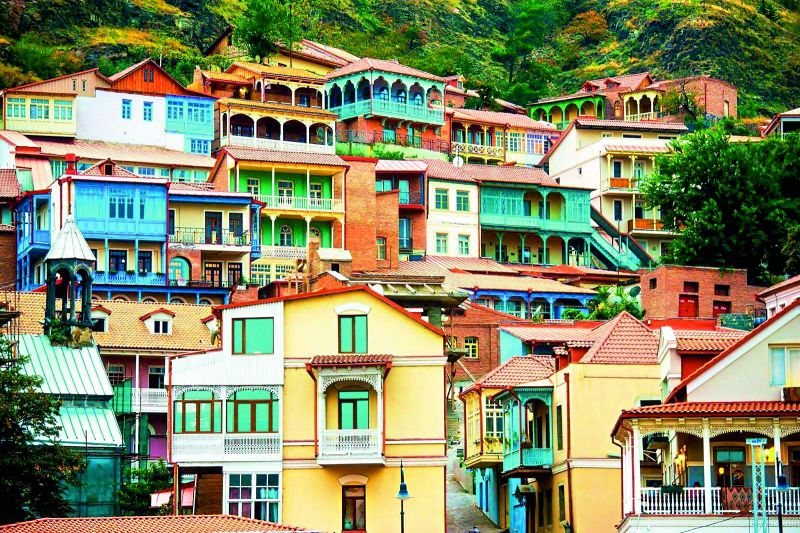 Another fascinating aspect of Georgia is its winemaking tradition. Locals believe there is no better way to spend a night than sipping wine with friends and family. It is believed that the Caucasus Mountains of Georgia are the birthplace of wine, and the country is one of the oldest wine producing regions of the world. Wine is a part of the country’s heritage, including architecture, poetry, and songs, and is associated with celebrations, holidays, rituals and most importantly with Georgia’s Christian Orthodox Church. I was privileged to taste a wide range of natural and low-intervention wines, which were amazing with an array of food, especially grilled meats. Georgian wine is available in almost every corner of the city. I returned with almost six bottles of wine for my friends, family, and myself. 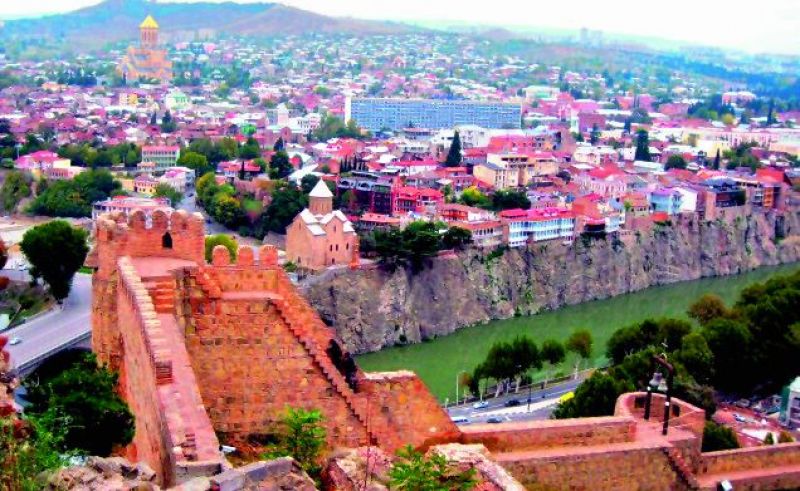 Shopping in tourist destinations is known to burn a hole in one’s pockets. And the same is a given for Georgia. Brushing up on your bargaining skills is really important. At the flea markets, I found a variety of kiosks selling antique jewels, bags, paintings and fabric, among several other things. Artists creating stunning portraits within mere seconds were another marvel I could witness. Language is bit of an issue in the country, especially when shopping, since English is not widely spoken in the country. However, it is easy to convey yourself through actions.  Georgian architecture is characterised by castles, towers, fortifications and churches. These old, elegant structures are stunning and contribute to the beauty of the country. We went around the city like free birds, without a destination in mind, enjoying the curvy roads and the structures around. I feel that’s the best way to explore the place. Georgia is a country full of statues. You see a number of them on the streets as you roam around. Each statue has a story of its own to tell. 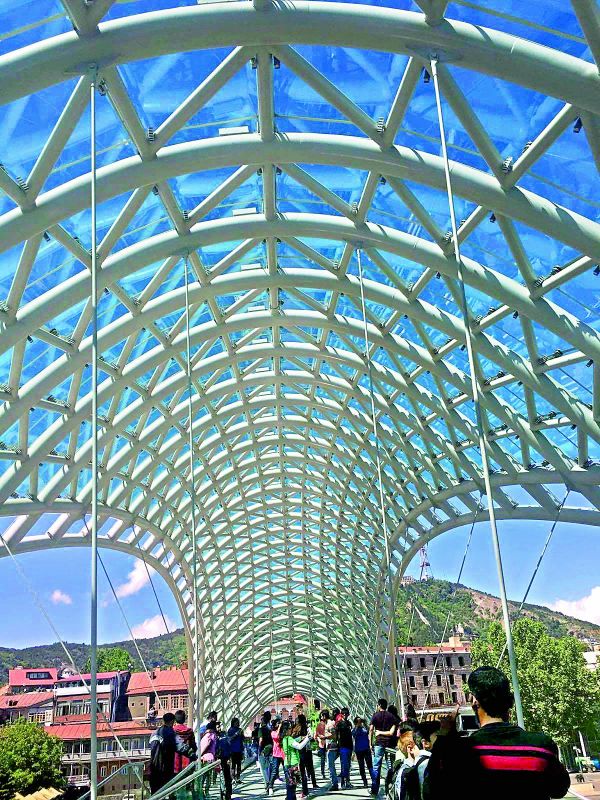 A 20-metre-tall aluminium statue of a woman, wearing the Georgian national dress, holding a cup of wine in one hand and a sword in the other is popularly known as Mother of Georgia. She symbolises the Georgian national character: wine stands for hospitality and the sword represents every Georgian’s love of freedom. The monument was erected on top of the Sololaki Hill in 1958, the year Tbilisi celebrated its 1,500th anniversary. A bow-shaped pedestrian bridge that stretches over the Mtkvari (Kura) River provides a view of the Metekhi Church, statue of the city’s founder Vakhtang Gorgasali, the Narikala Fortress on one side, and Baratashvili Bridge along with the Presidential Office on the other. The bridge is illuminated using 1,208 custom-made LED fixtures that enhance the beauty of the Kura River below and buildings on both banks of the river. The structure of the bridge was built in Italy and transported to Tbilisi in 200 trucks, while the lighting was installed on site during the assembly of the structures. The bridge serves as easy access between the constructed Rike Park and the Old Town. 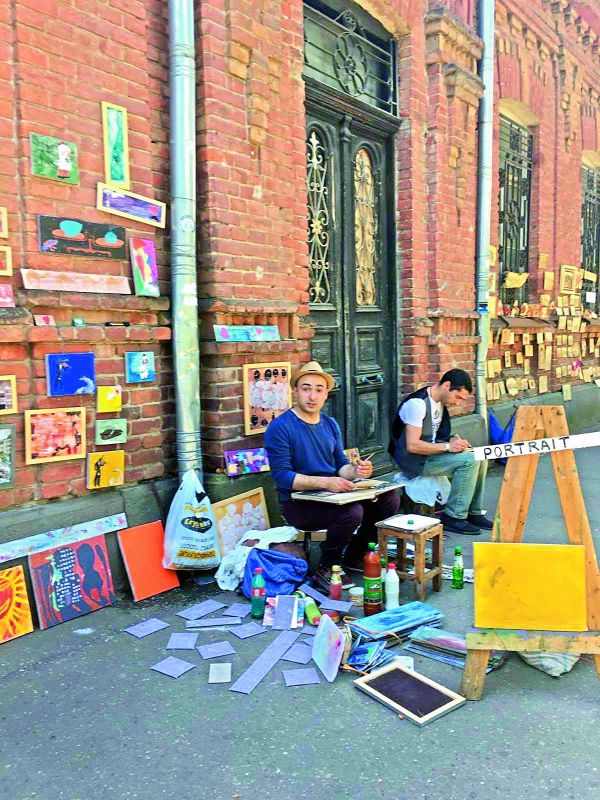 Photos from the Flea Market 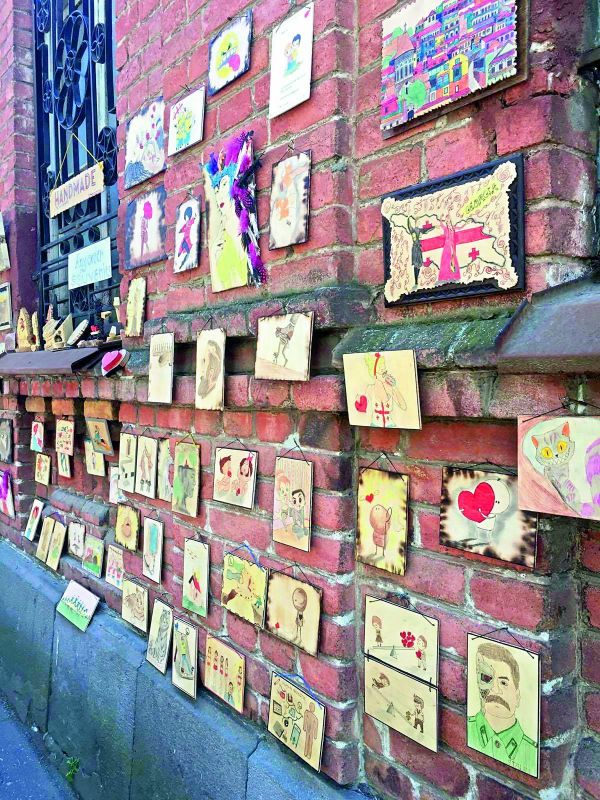 The Narikala Fortress is an ancient fortress overlooking Tbilisi and the Kura River. The architecture dates right back to the 4th century, when it was a Persian citadel. There are two ways to reach this beautiful structure — either by cable car from Rike Park or by walking up from the Meidan. At this spot, we decided to walk. It wasn’t an easy walk as there were no proper paths. But trust me, the struggle is worth it. The view from the top and the fresh air justified the trip. This is another monument that makes you feel like no other place on earth is as gorgeous as Georgia.

— Lakshmi K. Venugopalan is a PR client service manager, who loves to travel the world. Most of her travels are done on a minimal budget