Yaowarat in the night — Wikimedia Commons

First came the winks and then the sly, suggestive grins whenever any man announces his plans to visit Bangkok. It is quite natural, for a destination whose reputation as a sex tourism spot precedes it. Well, there is sad news for those who nurse X-rated dreams of massage parlours, skimpily dressed go-go dancers or the red light area when visiting Bangkok. Apparently, the tourism minister is trying to give a facelift by reinventing the country as a female-friendly tourist destination. A change that was evident when I decided to fulfill my longstanding dream of visiting Bangkok. My wife Smitha, my daughter and son accompanied me when I embarked on a 10-day visit that completely changed my perspective of the infamous city and its provinces. 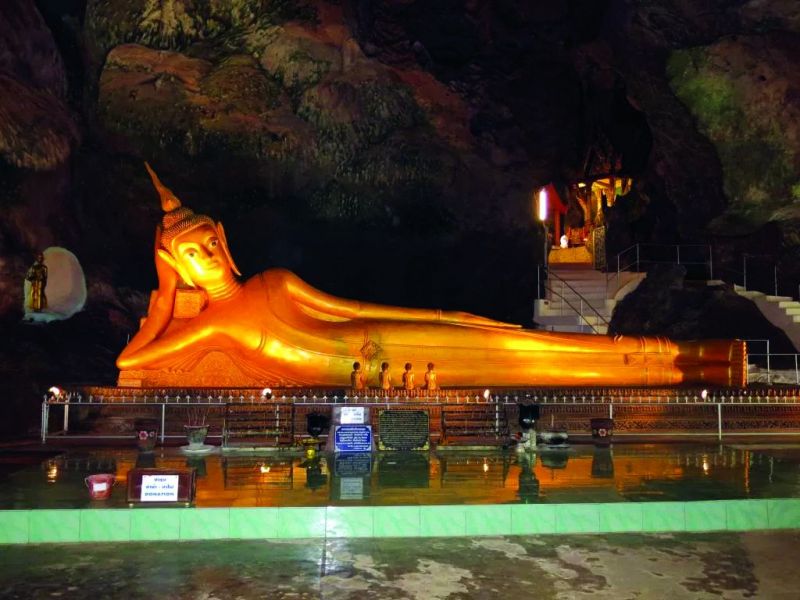 What I saw in Bangkok was a normal city with its share of hardworking denizens going about the business of living. Across the country, tourists are given top priority. Contrary to popular belief, the infamous ‘sex tourism in the open’ was really not that out in the open. Perhaps it happens clandestinely, which would be happening in every city in the world. Some new rules have been put in place, which has considerably cleaned up the image of the city — is what a guide informed me.  Moving on to the journey, my first destination was the Krabi Islands. This is not a single island but is made of many smaller islands like the Ko Poda, Ko Ngai, Ko Phi Phi Le, Ko Yao Yai and the Ko Lante Yai to name a few — all of these islands can be reached by boats. 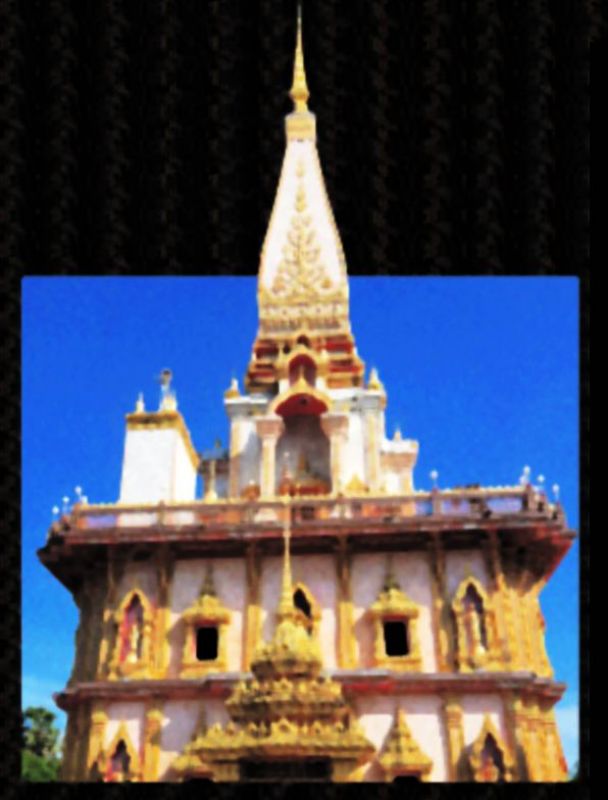 Out of these, perhaps the most well known is the Phi Phi islands, which is an adventurer’s paradise with its white sandy beaches, turquoise waters, towering limestone cliffs, caves, waterfalls and the exotic wildlife. What I loved the most were the beaches since astonishingly it was the first time I had set foot on a beach. We had food from a small hotel run by a mother-son duo and the food, mostly chicken and beef, was delicious, not to mention healthy with all the soups, broths and dishes having a good share of vegetables and greens in it. 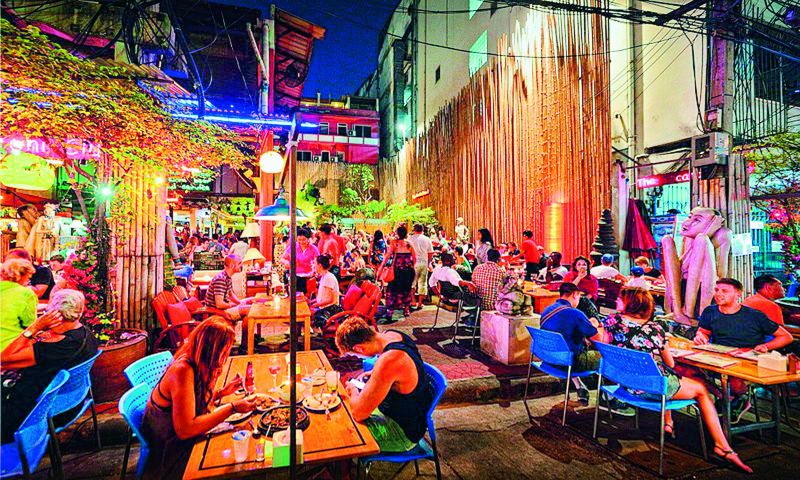 Leaving aside the food, what my family and me enjoyed were the adventure sports. Kayaking, snorkeling, scuba diving, canoeing — you name it and this place has it on offer for you. Though very enticing, what is sad is that I am not much of the adventurous type and would rather spend time sitting inside the confines of my room watching the world go by. I am too lazy to walk around. But the adventurous spirit managed to snare me on one occasion when I went canoeing.  From there we travelled to Phuket by road, which is a mere three-hour journey. We visited the James Bond Island, which is a famous landmark in Phang Nga Bay. It became quite well known after it was showcased in all its grandeur in the 007 film The Man with the Golden Gun (1974). 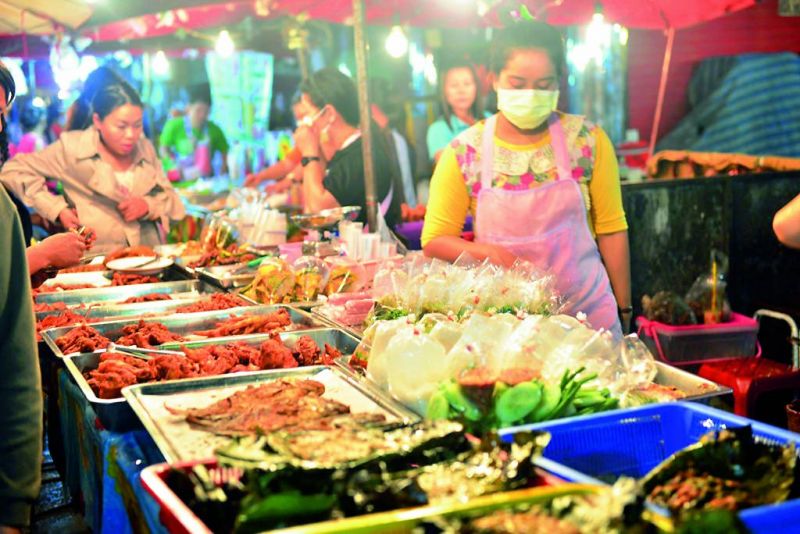 A distinctive feature of this bay is the number of sheer limestone cliffs that vertically jut out of the emerald-green water. Here as well adventure sports are aplenty to lure the tourists. The cuisine was again the highlight with its delicious chicken, beef and fish dishes along with the long stretches of clean, white sandy beaches. I did search for exotic food like snakes, beetles etc but could not see anything there! The next stop was, undoubtedly, Bangkok. If Krabi and Phuket were thriving tourist destinations, Bangkok was more of a city. Here again there were gems waiting to be discovered in the city that is predominantly Buddhist and deeply conservative. Buddhist temples are in large numbers, each more beautiful than the next with huge reclining Buddhas and gleaming floors that have not one speck of dust on them. We all spent time visiting the shrines. The tuk tuks, a popular mode of travel in Chinatown, or the floating markets accessed by long tail boats are also a charming tourist take-away. 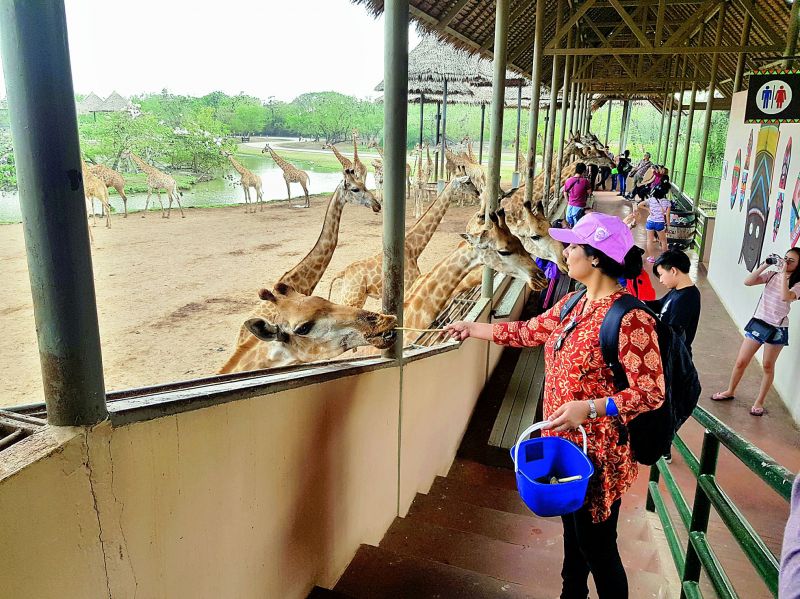 The city offers a study in contrasts — there are street stalls that sell yummy food to haute cuisine, one can savour sitting in roof-top restaurants. There are high-end markets that stock every luxury brand to Saturday markets that sell goods at cheap fares but with good quality. Shopping, which men normally loathe, was one of my best experiences. Good leather goods and clothes come cheap and that was definitely what we hoarded. Shopping aside, the Safari Park experience with shows featuring animals and birds was absolutely a memory etched forever in my mind. We took in the orangutan show, fed giraffes, watched the lions and tigers in an open safari but somewhere my heart went heavy. Watching animals perform, I felt sad because these animals too are inheritors of this earth but for our selfish needs, we use them to entertain.

Bangkok also offered us an experience that we will not forget in a hurry. There is a huge maze there, which I have only seen in comic books, which is so very confusing. After being inside, finding the way out proved to be a huge challenge but one I thoroughly enjoyed. It is a game that can be imitated in our country too. We also visited the upside down house where the floor becomes the ceiling and all the furniture is topsy-turvy. The kids had a lot of fun there. I was curious about the red-light area and wanted to see how the much talked about area looked like but it was not possible this time due to lack of time.

— The writer is a filmmaker

(As told to Priya Sreekumar)