DECCAN CHRONICLE. | NIVEDITA NIRANJANKUMAR
Published Jan 22, 2017, 12:21 am IST
Updated Jan 22, 2017, 7:14 am IST
A hen party contingent shows you how to fully bask in the sunshine when in Thailand’s glorious islands.

It was supposed to be a fun, somewhat wild bachelorette for a friend combined with bringing in the New Year 2017 — so the three of us — belonging to different parts of the world reached Bangkok at 6 am on the morning of December 31. Quickly boarding a connecting flight from Bangkok to Phuket, we hailed a taxi to reach our Airbnb accommodation at Patong beach. A warm lady, Kob, ran the Airbnb accommodation, called Frog House. After freshening up, we headed to the local market to buy clothes. The markets in Phuket are very much like the ones back home, except that the ones in Phuket host small open bars and restaurants as well. Every night with the setting sun, the place comes alive in the glow of the fairy lights strung along the shops of the market.

The bars are manned mostly by youngsters who give you a list of things you can do when in the city. Patong beach also hosts one of the most happening New Year parties in Phuket and as the clock started ticking closer to 12, we headed towards the beach. With every passing minute, someone would light up a lantern, make a wish and set it free in the sky. Women passing us by hugged us and wished us a Happy New year. Not once did we feel unsafe — the island felt like a safe haven for three young, single women on a trip. The following day, we decided to explore the town and took to walking from the hotel to the beach. After a hearty meal, on our return, Kob told us that she had booked us a day tour to Phi Phi Islands. And so, we set out the next morning at 7 am and after exchanging pleasantries with a jovial guide, David, we boarded a ferry.

David informed us that the day trip would comprise a visit to the seven islands including the popular Phi Phi and Maya Bay. He handed us snorkelling devices and, after a set of basic (and quick) instruction, dropped us at the first island, Khai. Being a non-swimmer and someone who is terrified of deep waters, my friends helped me use the snorkelling device. The sight under water was beautiful to say the least — schools of fish of all colours and sizes swirled around us uninhibited, the flora and fauna were absolutely dazzling. After Khai, we moved to Mosquito Island. Unlike what the name suggests, the Island is infested not with mosquitoes but monkeys. While the high tide prevented us from anchoring at the island, the monkeys reached out to us, some of them even swimming all the way to the ferry. 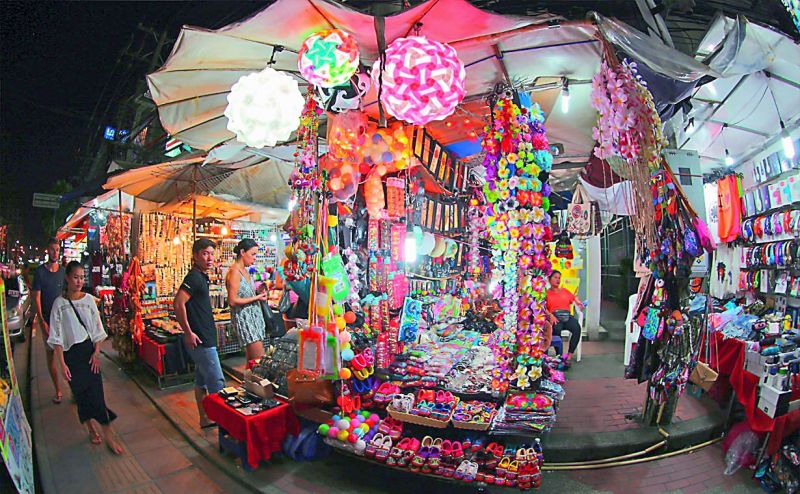 Soon afterwards, we moved to the Phi Phi islands. This place is best to experience deepwater diving and only experienced swimmers are allowed to enter the waters. After lunch, we headed to the most awaited part of the tour — the beautiful Maya Bay. One would assume that the first week of the New Year would render the place crowded, but despite the number of people on the roads, the beauty of the place remained undiminished. Hidden between two hillocks, the beach sans crowds is a paradise. I could only imagine returning here another time, spreading out a mat and reading my favourite murder mystery.

Things to do
Apart from the beaches, these are some places that deserve a visit:
Big Buddha: Located atop the Nakkerd Hills, the 45-metres high Big Buddha is
visible from half of the island. Despite being swarmed with tourists all year long, the space has an energetic pulse due to its activity.
Rum Jungle: A family-run semi-open restaurant in Rawai, Rum Jungle is
headed by an Aussie chef who prepares a divine New Zealand lamb shank. They also have some great vegetarian options.
Chalong Bay Rum: A mere 9 km north of Rawai, Chalong is home to Phuket’s only working distillery that is worth a visit.