The enigma that is Egypt

Traditional feluccas and modern cruise ships on the Nile

We’ve just touched down in Cairo and I’m impatient to see the pyramids. I decide that the approximately one-hour drive to see them must be undertaken NOW, so we set off heading southwest of Egypt’s capital city. Even as I try to focus my eyes inward to the tales of ancient Egypt that I’ve grown up with, modern-day mayhem intrudes upon my senses. Honking cars, a tumult of people talking at the top of their voices, dish antennae sticking out from every crevice in the shanties that stretch out interminably in a sheath of shoddy engineering that boggles the mind just as much as the marvels that await me at the end of this journey.

But, finally, we are in the city of Giza and soon, the pyramid complex that I’ve studied only in pictures or seen in documentaries now looms above me. The Great Pyramid of Giza is the oldest of the Seven Wonders of the Ancient World and is said to have been built around 2560 BC. Now that is next level to ancient and I am amazed by the sheer size and precision of its architecture. All the Netflix documentaries about its monumental proportions and mystical purpose zip through my mind, adding to the allure. ‘Is it true it was built by aliens or demi-Gods? Is it older than we know? Was it an ancient power plant as scientist Nikolai Tesla is said to have proved?’ all the theories make me breathless as I duck into the Robbers’ Tunnel to enter the labyrinthine interior of the mysterious pyramid that is also called the Pyramid of Khufu or Cheops. I manage to see the broken sarcophagus and scramble out of those close sloping tunnels before the claustrophobia overtakes me completely. Outside, soldiers on camels look stern, even as they look away while people illegally climb up a few levels of the gigantic stone structure. 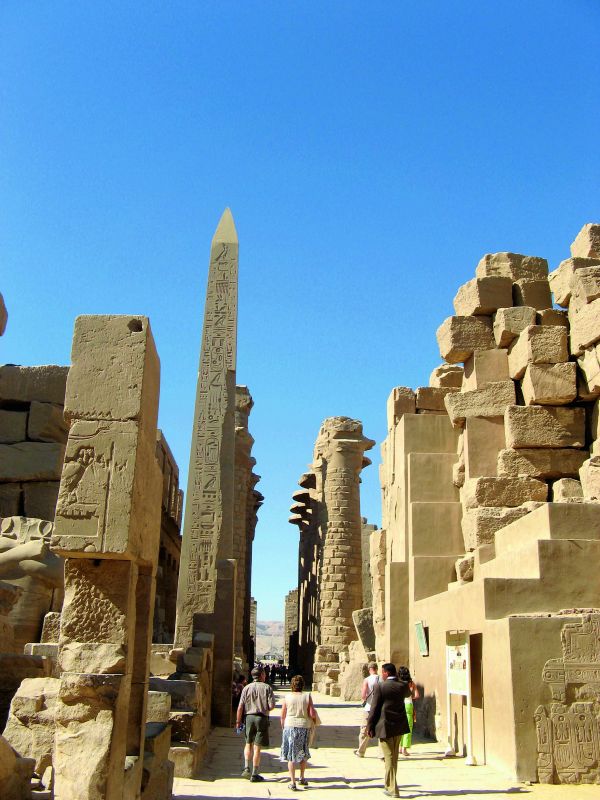 The Sphinx sits, well, sphinx-like nearby, not giving away the secrets of its lion’s body and human face nor why its nose is missing. I can see water striations on its base and wonder whether it was heavy rain or an inundation of the river Nile that once flowed close that caused this erosion. Has it been sitting here for 4500 years or even double that? Archaeologists still don’t really know conclusively. 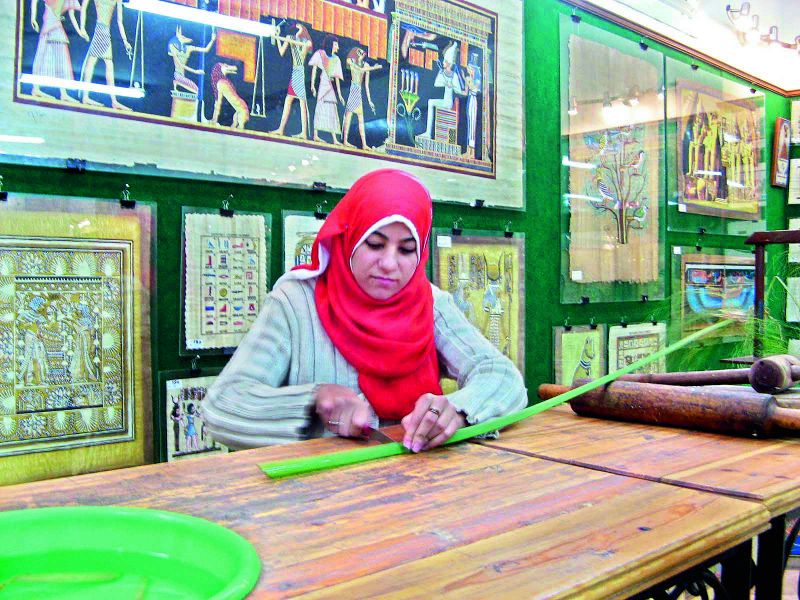 Papyrus being made from reeds

A visit to the Papyrus Institute gives me insight and instruction on how the ancient scrolls were made using the rushes from the banks of the Nile. A perfumer also demonstrates how the essential oil of Egyptian lotus is used to create the delicate, delectable fragrance that infuses the store. Later, I see papyrus and lotus, symbols of rebirth and regeneration, inscribed on columns inside the ancient temples in Karnak and Luxor and realise just how much the old can still be found in the new. 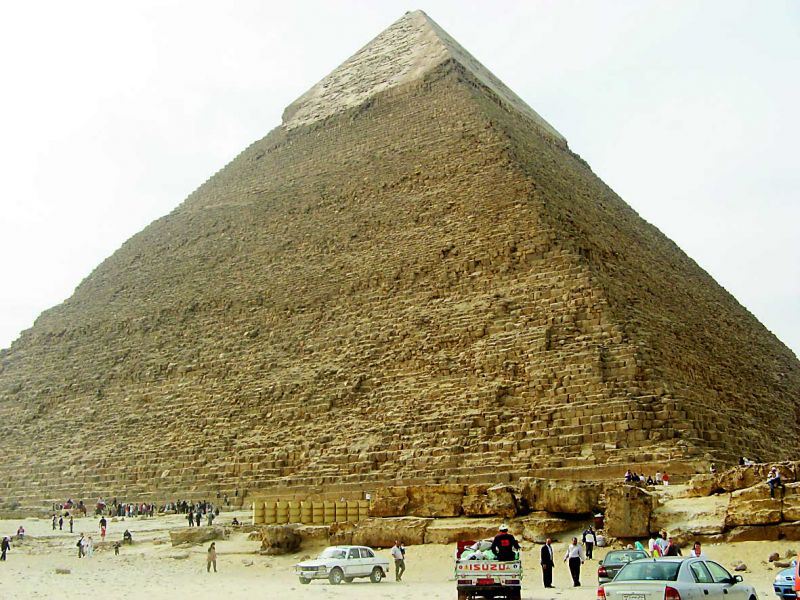 The Great Pyramid of Giza

The rest of the day is spent being held spellbound by all the riches from pharaohs tombs unearthed in the Valley of Kings and stored in the Egyptian Museum. The evening is more esoteric… bargaining briskly for mementos at the Aladdin’s cave-like Al Khalili Bazaar and later, bringing a voluptuous belly dancer and a whirling dervish in turns to my table as I have dinner on one of the many river boats before I head to the magnificent and informative sound and light show at the pyramids that hasn’t changed over two decades but is still quite a spectacle.

Banking on the Nile: Aswan, Kom Ombo,
Edfu & Luxor
Bleary-eyed the next morning, we fly to Aswan to begin our cruise on the world’s longest river - the Nile. The stateroom is spacious and the small cruiser has everything from restaurants to a swimming pool on the top deck and even ‘gelabia night’, where we will don the flowing kaftans of the locals and party into the wee hours. 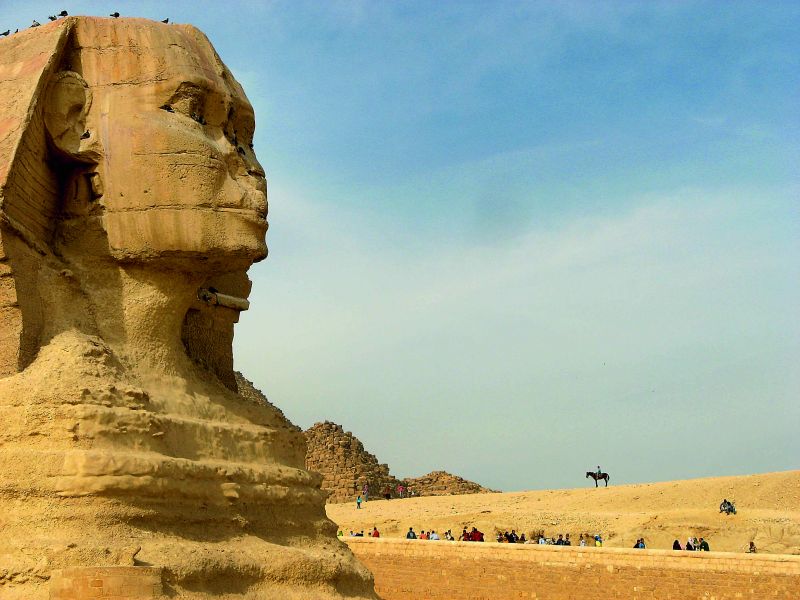 We’ll be on the river for three days, stopping at Kom Ombo, Edfu and ending at Luxor. At Aswan, we visit the famous dam that changed the fortunes of Egypt. And then to the Temple of Philae, where I’m fascinated by the detailing and almost modern feel of the hieroglyphic reliefs (the vertical Egyptian formal script that often uses pictures along with an alphabet to convey an idea rather than a specific word). Amazingly, this temple was relocated stone by stone to an island in the reservoir of the Aswan Dam to save it from being submerged.

Even the twin rock temples at Abu Simbel that I have been all agog to explore have survived a similar fate. Built by the Pharaoh Ramesses II in the 13th century BC to commemorate a battle victory, four 20-metre tall colossal figures of him seated on a throne and wearing the double crown of Upper and Lower Egypt flank the entrance. The smaller temple nearby has statues of him and his queen Nefertari and is also worth driving through the Sahara Desert at the crack of dawn to see. The interiors of both temples are just as fascinating as the exteriors, if you have the time and the inclination. 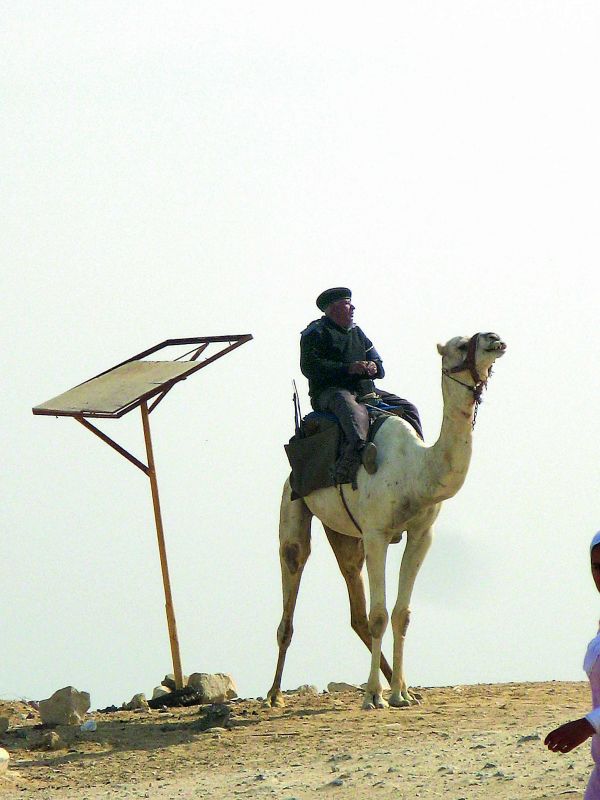 Soldier on a camel at Giza

Meanwhile, the impressive obelisk at the Temple of Luxor on the East bank of the Nile will remind you of its twin that you may have already seen at the Place de la Concorde in Paris, as it was gifted to the city. I also highly recommend a visit to the Temple of Karnak nearby, which was built over a long period under the auspices of 30 different pharaohs and gives insights into the deities worshipped by ancient Egyptians, the popularity of each changing over several generations.

Be it these precincts, the temple of Sobek and Haroeris in Kom Ombo or the one to Horus at Edfu, each has a host of wonderful structures, hieroglyphics extolling the virtues of the various pharaohs that built them or even later contributed to their coffers, and are sheathed in a rich and multi-layered past. I could lose myself in the mystery and mythology for days and write reams about the dazzling details, but it’s best for you as a traveller to make all those discoveries yourself.

While the East Bank is all about coronations and celebrations, when you cross over to the West Bank of the Nile, you enter the hallowed ground where death walks and the Valley of the Kings is located. It’s thrilling to play Indiana Jones and walk down the sloping paths that take me deeper and deeper underground into the maw of an erstwhile pharaoh’s burial chamber and stand in awe of the massive stone sarcophagus which once contained the mummified remains with the occupant’s organs stowed away neatly in individual jars on a shelf alongside. The necropolis has more than 60 such tombs and counting, as new ones are excavated quite often. While some are small and have only a few connecting rooms, the ones belonging to the most powerful kings have a complex subterranean network that once contained untold wealth. The paintings using brightly coloured pigments on the walls look like they were completed yesterday and the entire experience is enough to give my goosebumps their own set of goosebumps!

The Egyptophile in me is satisfied but strangely hungry for more. How I wish I could have gone back in time to see these monuments being built or, at the very least, partnering with detective Hercule Poirot to solve the case on the cruise in Agatha Christie’s Death on the Nile! But then, each visit to Egypt unlocks a mystery and creates many others.