How on earth did they build that! I thought to myself, as I craned to look up at the monastry. Tucked almost miraculously on to the edge of a steep cliff, the Tiger’s Nest looked more like a figment of an artist’s imagination. Enticing, intriguing — there was no option but to check it out myself.  Armed with a trekking pole, hat firmly on head to shut out the sun, I start on the rough mud path that climbs towards my goal. The air is crisp, and as I climb, ignoring my protesting breath, the scent of oak and the splashes of rhodendron soothe away the weariness. Birds, including a strange myna cum pigeon waddle past, unafraid, and green doves watch curiously. Often, a butterfly flies grandly past, unhurried in its plunder of the flowering trees. Above me, the tiger’s nest is hidden from view, but clouds seem to be gathering in the heights.

I am not alone on this journey. Other participants who are in Bhutan to attend the Mountain Echoes Literary Fest have also driven to Paro from Thimpu to enjoy the salubrious air. Well known faces among them catch the attention of the locals. Kids and other trekkers recognise Arshad Warsi and we could hear the word Circuit being passed around. A few autograph hunters gather around him, and Arshad happily fields their questions. His wife, Maria Goretti, who has held a fascinating cooking session at the fest, smiles indulgently as we walk on leaving Arshad and film director Shakun Batra behind, sitting perched on a rock, legs dangling. 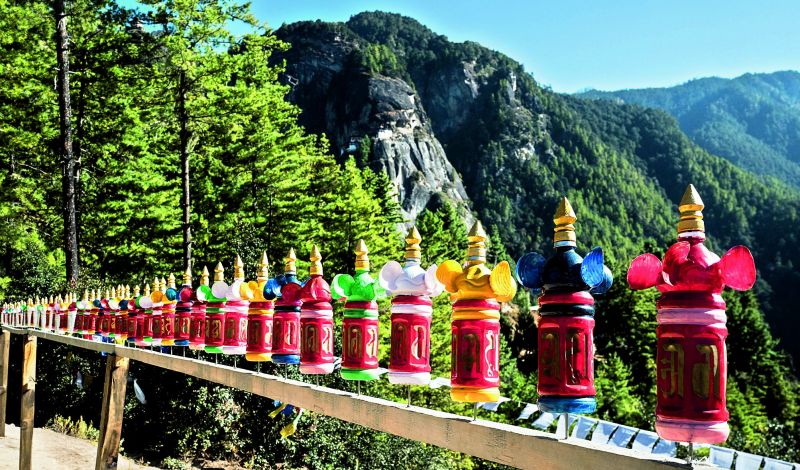 Prayer wheels on the way to the Tigers Nest.

The stargazers do not know it, but there are are other celebs climbing up the slope with me. Writers Kalpana Swaminathan, TV anchor and author Amrita Tripathi among them, but the pull of Bollywood is stronger. Down on the slopes below, in the resort that we are stationed at for a day, Gulzar is ensconced, far away from the madding crowds. A day earlier, the festival had entertained Sharmila Tagore, Vikram Seth, Vishal and Rekha Bhadwaj, Pak writer and singer Ali Sethi among others, who had opted out of the Paro trip due to other engagements.  As we walk higher, the gilded tops of the temples beckon. Hard to imagine how in 1692, when there were only mules and men to hoist the material up the 1000 metres, the temple was built. Clustered in a group, the temple shields the cave where Guru Padmasambhava, who reportedly landed there on the back of a flying tiger, meditated for three years, three months, three weeks and three days before embarking on his mission to destroy evil. The Guru brought Buddhism to Bhutan, where it is still prevalent, and holds the honour of being the tutelary deity of the kingdom.

Designer Wendell Rodricks, who has already trekked up before the Fest began and warned me of the unrelenting upward nature of the trek, also narrated how a carelessly left butter lamp had reduced the original temple to ashes. With characteristic calm, the local populace helped rebuild it to its former glory. Steep steps and a scenic waterfall, are part of the final approach. We rested at a view point and drank sugared juices with Ashrad and Shakun Batra who have shed their fans and caught up with us, so the steps are not as formidable as they seem.  The temples are breathtaking in their detail. Gold leaf, wall paintings and tankas abound, the idols of the Boddhisattvas are beautifully wrought, and lit by butter lamps. As I bow before an imposing idol of Avalokitesvara, a monk offers me prasad, a packet of biscuits.

The cave, which if one looks carefully, has a naturally created tiger head set into its rough sides. The temple itself clings precariously to the rock face, and standing on the small balconies that the buildings sport, seems an act of faith. Clouds gather overhead, and we decide to return. Navigating the steps, we walk past the large prayer wheels, turning them as we pass, give the cafe a miss and rush down to escape the impending rain. Arshad’s fans are waiting and cheer as he walks past. A brief stop at the water wheel where the water is said to guarantee moksha, and we are back into the hotel. Far above, the Tiger’s Nest gleams inscrutably out of reach.