From AUSTIN to the Alamo

The spectacular view from Mount Bonnell of Austin Lake.

Ever been to Austin? If you have, you'll know that at every vantage point, or street corner an Austinite will proudly point out the UT Tower in all its golden-lit glory. And again. And again. Because all roads in Austin lead to the UT Tower. I was with a thoroughbred Austinite who studied medicine at the University of Texas, and lives in the ecologically beautiful Mueller which was reclaimed from the Old Airport. Thanks to her local soul, I saw Austin through her eyes guiding me through its bustling streets and corners. The UT Tower usually shines like a beacon, and this year it is burnt-orange in December in honour of the class of 2018, and at any turn driving around Austin, you'll be sure to spot it, and see locals beaming proudly! The 307-foot tall tower which was completed in 1937 is the university's most distinguishing landmark.  At the top of the tower is a carillon of 56 bells, the largest in Texas, which is played daily. 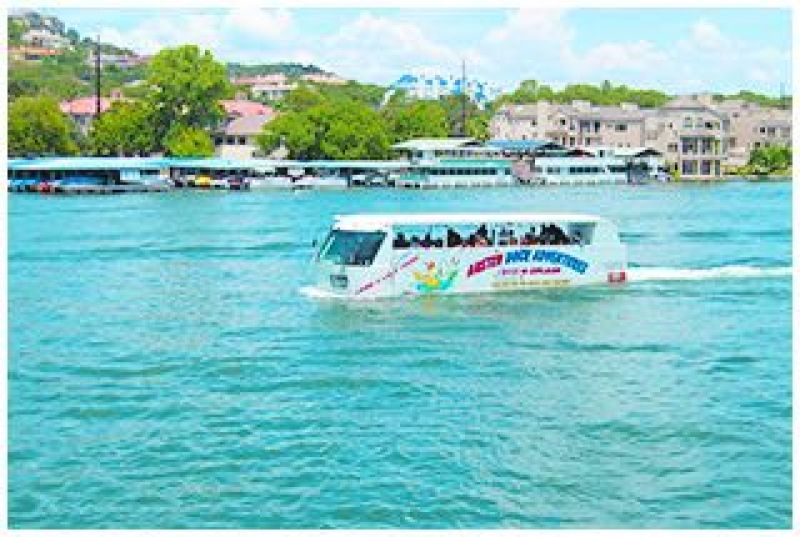 The city itself is abuzz with youngsters, students, tourists and more students going about their life. And it looks like a town Indians love as there is a huge Indian student community here. Which also involves a lot of partying, but beyond that is a hilly terrain that embraces fitness buffs, so many cycle up the hilly slopes of this beautiful city which is home to the palatial residences of actors like Brad Pitt, Jennifer Aniston and others. Or you can hire boats for the weekend to splash anchored on Austin Lake... an idyllic endeavour that many Austin families partake of. 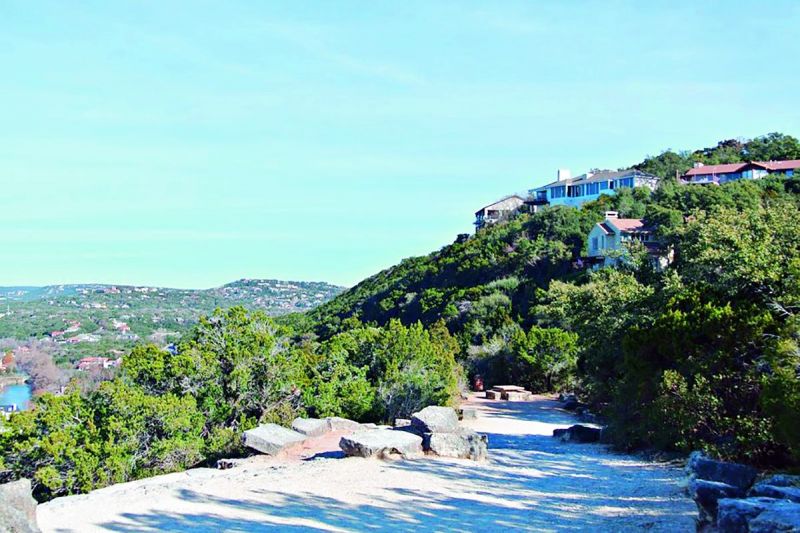 Mount Bonnell
It is a destination replete with winding roads that trudge up a picturesque drive to the hill top which is also called Covert Park. From atop, after walking past rocky steps, you reach many vantage points alongside the gorgeous and serene Lake Austin, a portion of the Colorado River in Austin, Texas. It was a hot day, and sweating profusely, we took turns to look below, eavesdropping on the lives of the rich and famous with glee. The homes are beautiful, and overlook the lake, some with a jetty for their private yatch as well. And you can see the whole of Austin and surrounding areas here. We spotted many cycling up, and many walking down the more steep face of the hill. Mount Bonnell was Native American territory before the Anglo settlements began. The first recorded thoughts about Mount Bonnell were written by soldier George W. Bonnell, who climbed to the top and wrote about his ecological findings. Later, Texas Ranger William AA "Bigfoot" Wallace brought tumultuous history to the land. This was also Mormon land in the 1850s. A day trip to Mt Bonnell is lovely, and you will see many couples trudging up, or walking gingerly on the sides to take a peak at Austin Lake. Apparently, it was also called Antoinette's Leap, after a damsel who leapt to her death to avoid capture from Indians that killed her lover! On our drive down, we cruised past some beautiful homes as we drove towards County Line on the hill, for a lunch of hearty Texas meats. The restaurant is situated on the back waters overlooking lush green environs. Since 1975, the County Line Austin Smokehouse and Grill has been known for its spectacular barbeque spread. The smoky barbecued brisket, hefty beef and pork ribs, juicy sausage and chicken, the portions are not for the small eaters, so go there with loads of tummy space. The deck overlooking the water is serene, and one can even feed hungry portly turtles for a quarter there... as you sip on a huge lime soda and await the meaty morsels coming your way. We had wings too, which were robust and delicious. 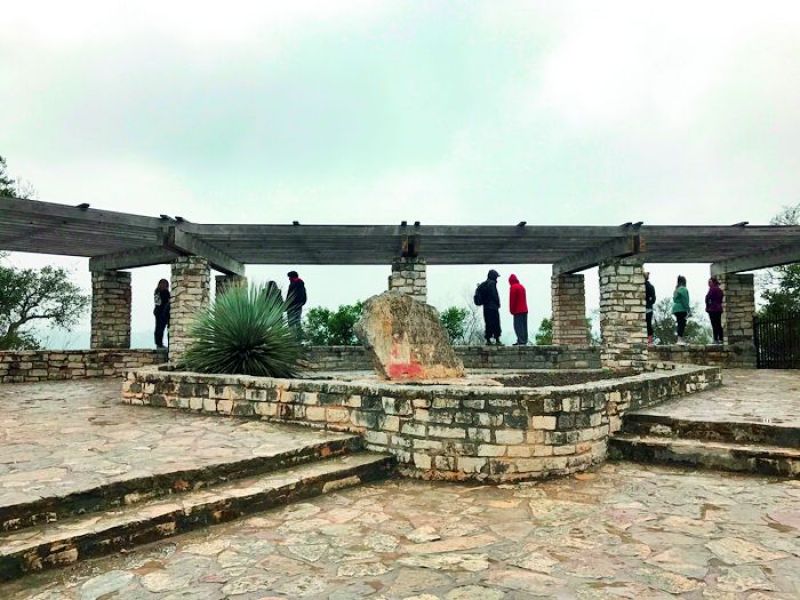 For a night out in Austin
There are many places to take in the bright lights in the party district here. We drove past Rainey Street which has a precinct full of restaurants and nightclubs with live music, completely lit for the night. This just half a mile long street has some interesting bars like El Naranjo, Banger's Sausage House and Beer Garden, Icenhauer's and Javalina. We also walked to the main Austin Sixth Street where strains of live music mingle with the joie de vivre in the air... go pub hopping from one bar to another. Listen to wonderful Texas strains or more hip-hop versions at the cool nightclubs in the area. We also visited a posh neighbourhood, where you get the best of luxury shopping with some high-end bars to tipple away on the roof tops. 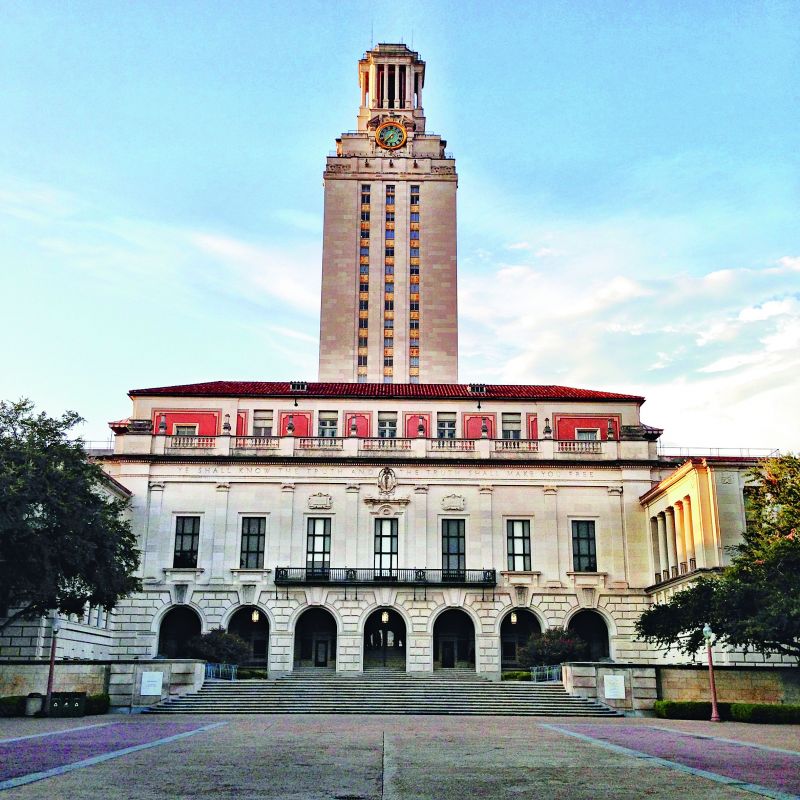 There are many Tex Mex joints, though we are not fans of the abridged US version, and many trucks that you can get your fix at as well. The Mueller has one that is very popular, and walking though the neighbourhood, you can have your fill of parks, fountains with a small gazebo as well, or just cycle around and stop for a coffee and pretzel.

What ever you do, don’t forget to visit the famed barbecue Franklin, that we heard has lines waiting their turn for the secret coffee-induced recipe. Infact, our friendly local residents Imran and Dimple also mentioned that they are usually all out by lunch time! So it's good to go there early morning and get your piece of meat! That is how good they are. They also mentioned how Franklin's ex-wife has now started a barbecue pit of her own that also does brisk briskets! 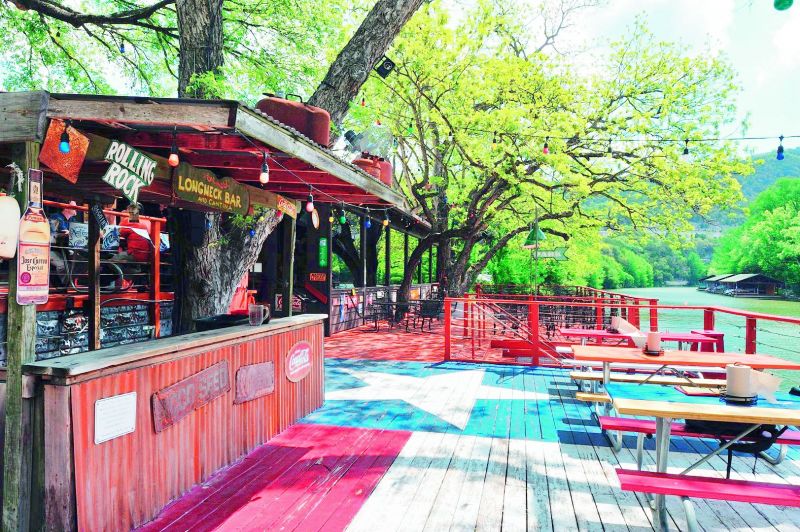 San Antonio and Alamo
The trip to San Antonio by car on the freeway is about an hour long... and it's a great weekend getaway for city slickers... though we did a quick day turn around in the sweltering heat. 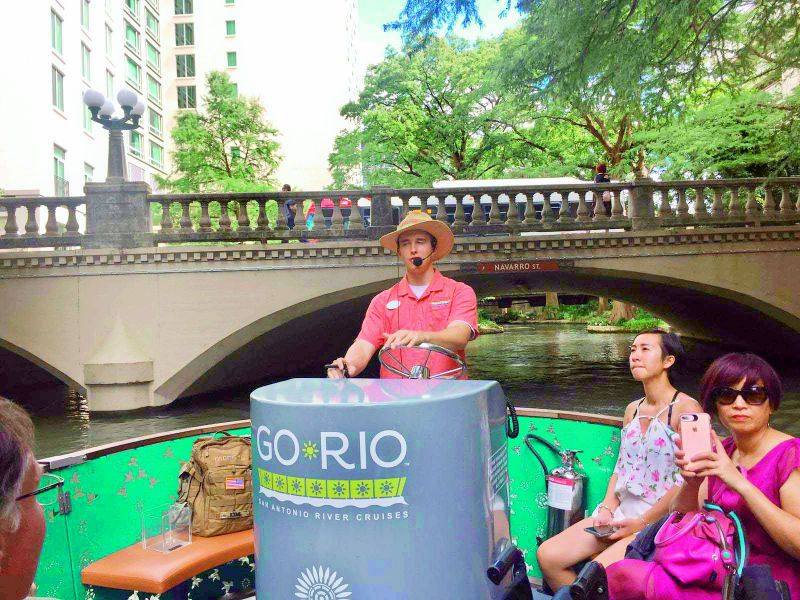 The Alamo
It’s a must visit and takes you on a tour of Texas’ past history in a wonderfully preserved heritage monument. But first some history: The Alamo Mission was founded in the 18th century as a Roman Catholic mission and fortress compound. It was the site of the Battle of the Alamo in 1836, and is now a museum in the Alamo Plaza Historic District.

The compound was one of the early Spanish missions in Texas. It later became a fortress housing the Second Flying Company of San Carlos de Parras military unit, who likely gave the mission the name Alamo. During the Texas Revolution, Mexican General Martin Perfecto de Cos surrendered the fort to the Texian Army in December 1835, following the Siege of Béxar. A relatively small number of Texian soldiers then occupied the compound for several months. They were wiped out at the Battle of the Alamo on March 6, 1836. It was then used as a garrison for soldiers, a depot and even a wholesale grocery store before it was restored and given its heritage badge. 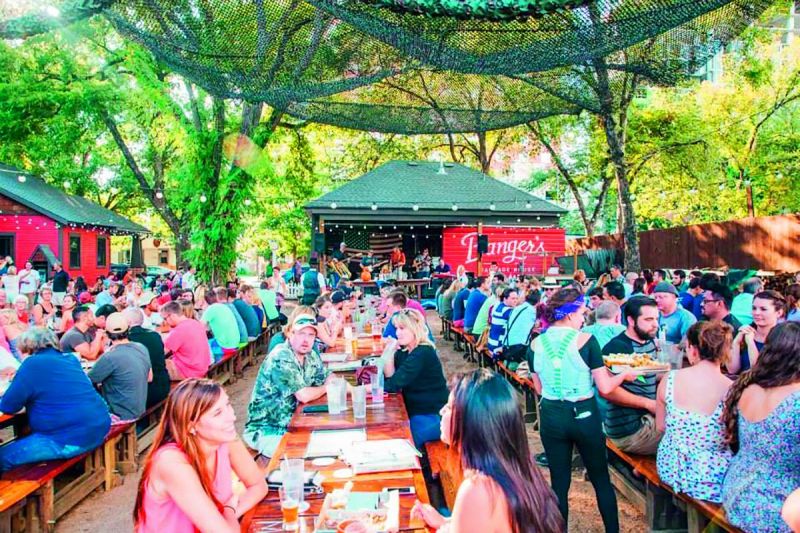 Entrance is free so it is usually teaming with tourists. Of course, if you were to consider the history of the land in comparison to that of India or Europe, it’s not that long ago. 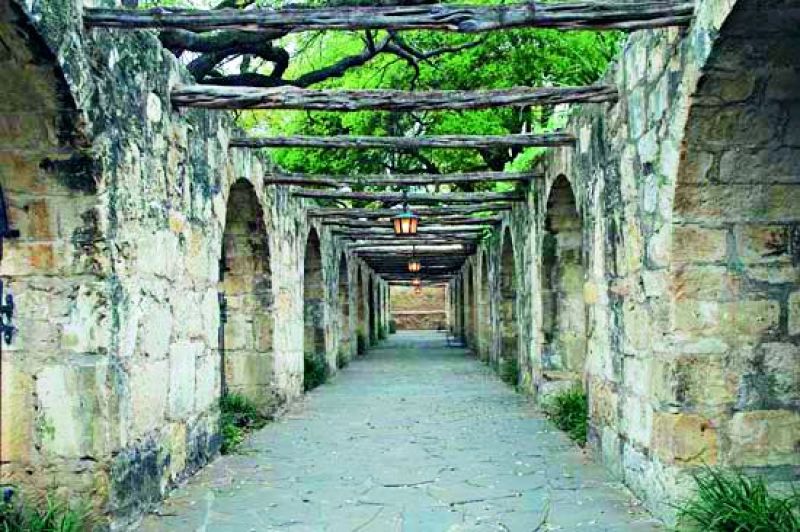 We walked in past the main hall, with flags and names of the soldiers that lost their lives, and an exhibition, a movie about the history of the Alamo, and a garden that has bits and bobs from the past. There were also many letters from visitors who traced their lineage to the fallen soldiers at the battle. America knows how to preserve its history and culture, beautifully. A thought that stuck, as back home, we have such a rich and centuries-old history lying in shambles. 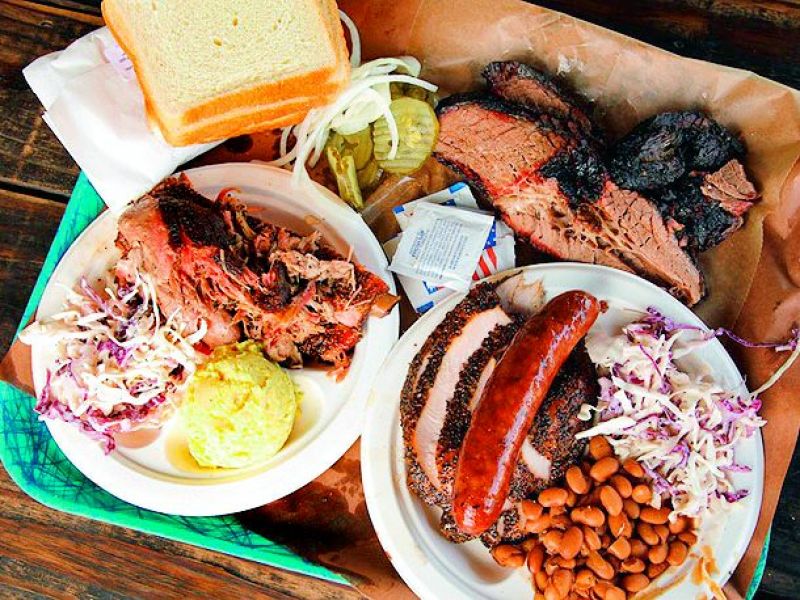 The meats of Texas

Then we made our way to the River Walk, which meanders through the downtown area, and is the city's second-most-visited attraction, which is why San Antonio is also called the River City. It took us a while to get our bearings right, as one can easily get lost as you follow the waterways. Lined with trinket shops and many restaurants, it's a wonderful day or night out. There are also flamenco music strains when the Fiesta Noche del Rio is celebrated. This little Venice with winding waterways takes you through the old city. We opted for the Go Rio river cruise that floats along the narrow waterways, stopping at various points to explain about buildings, and adding lots of Hollywood trivia about which movie was shot where... it's quaint, and our guide was quite humourous to make the ride worth the while... as in terms of history, it's mostly modern day trivia that rules the roost.

When downtown, do visit the San Fernando Cathedral, the Majestic Theatre, Hemisfair, the quaint La Villita, Market Square. Some of the hotels here have a long history like the Fairmount Hotel which was built in 1906 and San Antonio's second oldest hotel which holds the Guinness World Records as one of the heaviest buildings ever moved intact! It was, according to reports, placed in its new location over four days in 1985, and cost $650,000 to move! And don’t forget to buy some robust Texas sauces to take back home or even some jerky to revisit the flavours of this land.