Tripping on a budget

Who would have thought that right inside the city one could find acres of lush green grass, tall trees, cool ponds, and a huge lake?

It was quite on an impulse that my friend Minu and I decided to plan a trip to Bangkok. For me, it was one of the things that was there in my wish list for a long time, and had started to seem like a joke. I had never gone out of the country until then, and my passport was just another ID proof to me. So, the planning was brief and hasty, with no tour operators, but just the two of us. And we both picked a window, when the airline and the hotels were offering a huge discount (much to our delight), and started the much-awaited journey. We reached Bangkok at around six in the morning, and after changing our currency to local Baht at the airport and getting our visas in place, we took a taxi to the city, where our hotel was. I was surprised to see that no one took any additional charges for currency exchange, contrary to my misguided belief. Our very first day started off with some rest, breakfast, and a visit to the nearby shopping centre called the Platinum Mall, and the street stalls. We walked all the way to the mall, which was situated roughly two kilometres from our hotel in Makkasan.

The mall is good for all sorts of shopping, from clothes, shoes, jewellery, toys, mobile accessories, gadgets, and even packaged local food! It is also a good area for street shopping, which is more lively at night, owing to the number of makeshift shops that pop up after sunset. We decided to take our first day a little easy since we had bigger things planned for the days to come. The first half of the next day was a walk in the park — literally — since we were eager to find out why everyone on the Internet asked the world not to miss the beautiful Lumpini Park, situated right in the middle of the city. We then understood why. 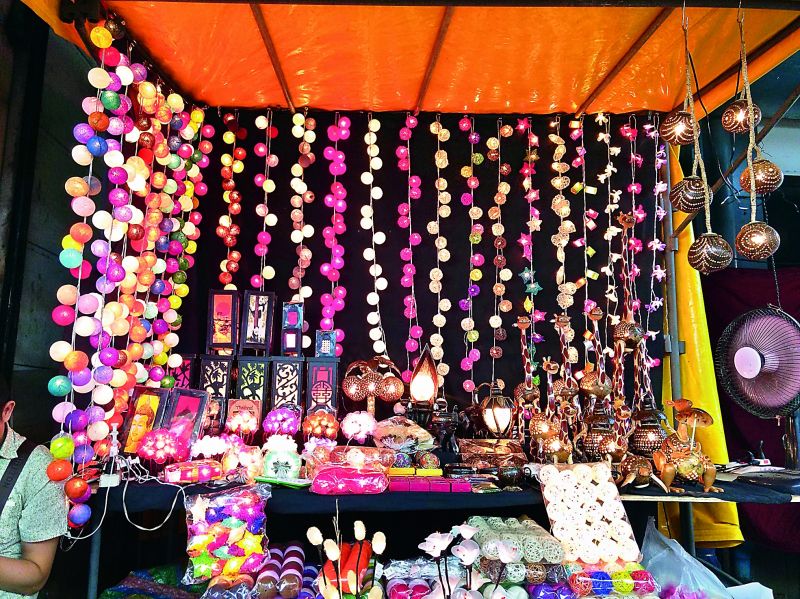 Markets in Bangkok are bright and colourful all night long.

Who would have thought that right inside the city, one could find acres and acres of lush green grass, tall trees, cool, clean ponds, and a huge lake? And, let’s not forget the countless komodo dragons roaming freely within! After getting a healthy dose of all that peace and tranquility, it was quite the task to get on with the next set of events, which was to visit all the major monuments, the Wats. These are the iconic Buddhist temples of Thailand, and I had marked down two of these for the next half of the day. Little did we know that the day was going to take a surprising turn, with both of us winding up on a teeny, tiny, flimsy boat in the Chao Phraya river! That was one of the wildest things I’ve ever done in my life, because at many points during the ride, I thought I’d never see land again! The river was deep, wide, and wild. And with every big boat passing us by, our tiny boat got rocked to its limits, at times even getting pushed.

But our driver was calm, and eventually, both of us accepted the fate as it is, and finally started to embrace the exclusive, private tour of the Bangkok waters. We saw all the major Wats, a few landmarks which we would have never covered otherwise, and of course, saw another side of Bangkok — a rotting one — which they never show in the brochures. We took a turn into one of the canals that led to an old residential area, all buildings built on water, some were rotting, some abandoned, and some fallen. There were houses, temples, schools and offices, all accessible by land and water alike. People in canoes waving at us, peddlers in boats coming near ours with souvenirs to sell, and people living under the bridges of this celebrated travel destination that we were in at the moment — a side of Bangkok I never thought I’d see. 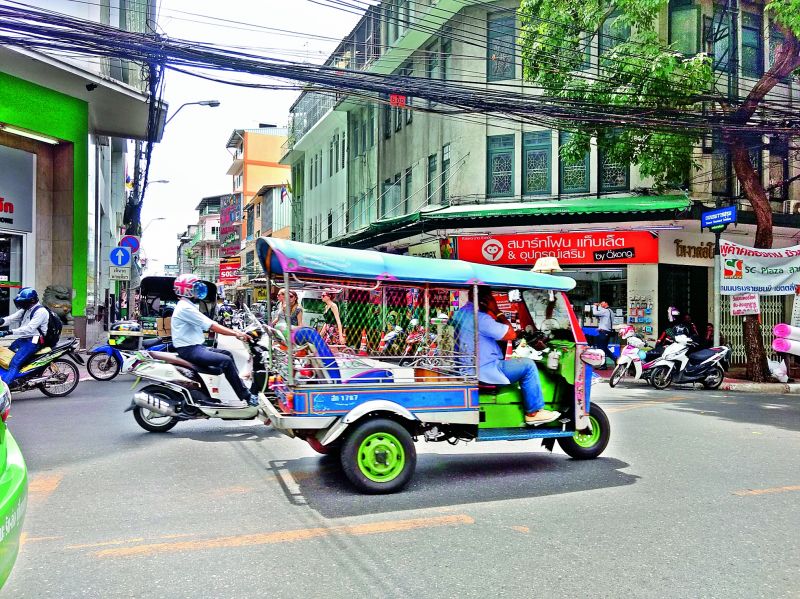 Tuk Tuks, roaming freely around the city originated from an old-fashioned rickshaw during the second World War.

The next three days were all spent mostly on shopping. The three Siam malls, which made my jaw drop, saw gradation from super cheap to super expensive from the first mall to the third. Bangkok is also famous for its weekend markets, and we visited one of them called the Chatuchak weekend market, which is a good place to shop for anything under the sky. It is, without a doubt, a labyrinth of never-ending shopping and food experience. Another place of this sort is China Town, a giant market area to buy anything and everything from, especially novelty knick-knacks. Bargaining was key when it came to any of the markets in Bangkok, not unlike our Indian ones. China Town is also a place to try out the distinctive Asian cuisine, which may or may not align with one’s traditional concept of food.

Our suitcases were jampacked with lots of goodies from various Bangkok markets, from clothes to souvenirs to packaged food, we covered it all. And of course, the beloved memories of the great experience we had, from the peaceful Lumpini Park to the nerve-wracking ordeal that was the boat ride through Chao Phraya river. The best part about the trip was its impulsive nature. It came as a surprise to most of our friends and relatives as well, since we didn’t want to answer any questions about “how will two young women survive an international trip with no assistance?” People ask us to this day why we didn’t go through a holiday package. But to us, this trip never felt like a challenge, even when we were visiting the Patpong night market in their infamous entertainment district. Although safety was always a concern for us during the trip, it didn’t stop us from having tonnes of fun either. And by the time we departed from Bangkok, my mind wanted more, and was already set on another international trip.

— The writer is a fashion designer and travel lover.