Walking downtown Manhattan has a wonderfully eclectic essence to it, with many a psychic healers awaiting your traipse in.

The din of traffic, the incessant pitter patter of hurrying footsteps, the glitzy and bustling city of New York, it is captivating. Embracing the Big Apple, my trip to the capital of the world was woven around a New Yorker’s New York. Not the touristy one. Though we did our bit of touristy meanderings too. The New Yorkers in question were my cousin sister and her husband, Rhythm and Ryan Rampersaud. The experience was one that  brought me close to the underbelly of the city that endears itself to all kinds... Walking from their apartment on 55 Street, everything was a nice endorphin... and the New Yorkers were on point as they walked to their favourite wine shop that looked like an old bookshop, only with wine bottles springing out from every corner. It’s a very New York activity, sipping on the wine of the day being showcased... and being privy to some wine appreciation courtesy a sommelier... and choosing the one that takes your fancy... with some cheese bits to chew on. It’s a must do... and you can walk back with a wee high and some good, fine wine too. 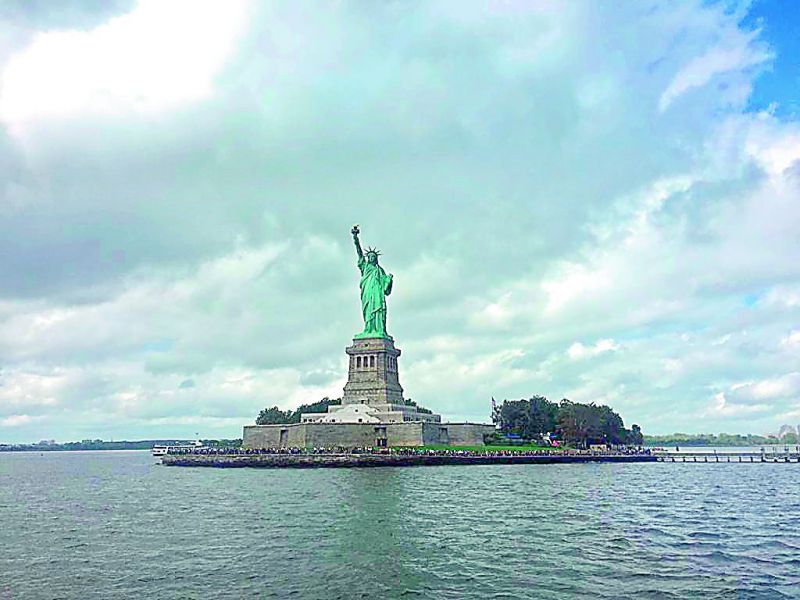 The Statue of Liberty

Walking downtown Manhattan has a wonderfully eclectic essence to it, with many a psychic healers awaiting your traipse in. Yet, it’s the famed pretzel joints that many make a beeline for, to get their fix of caffeine and breakfast bites. The most famous one has huge lines and it is better if you get there early... and order one with cream cheese, delicious! And then go ahead and have yourself a Ruben... the New York sandwich that makes the ordinary ones feel like poor cousins... delicious. I had one from Lenwich... and it could have lasted me three days. That’s how large the portions are! 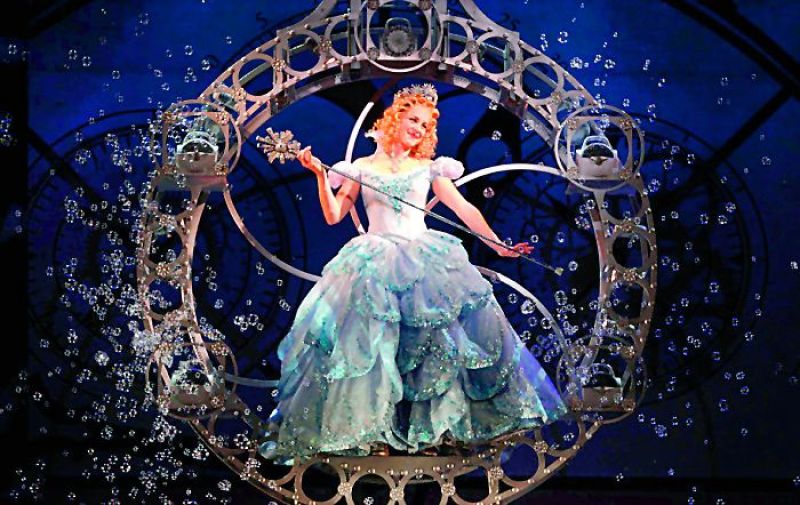 If you want to tread the footsteps of a New Yorker on a cold nippy day, then take a walk on the jetty overlooking New Jersey, it’s where families come to let their children play, and many a fitness aficionado take to its winding path... and there, anchored at one end is a boat where you can sit with rare abandon, sipping wine, and slurping on cocktails at their bar... overlooking the skyline.

When a New Yorker wants to drink, it’s the waterfront restaurants that are great for a sundowner. We went to the Pier 26 to the Grand Banks which was wonderful. Grand Banks, the historic schooner turned oyster bar is docked at Tribeca Piers. The perfect place to watch the sunset, and sit at a bar. looking out at the New Jersey skyline, the Sherman Zwicker sits just enough below deck for an out-to-sea feel. The breeze is cold, the gulp is warm and the company is warmer. You can order your tipple with yummy notes and chit-chat about life. 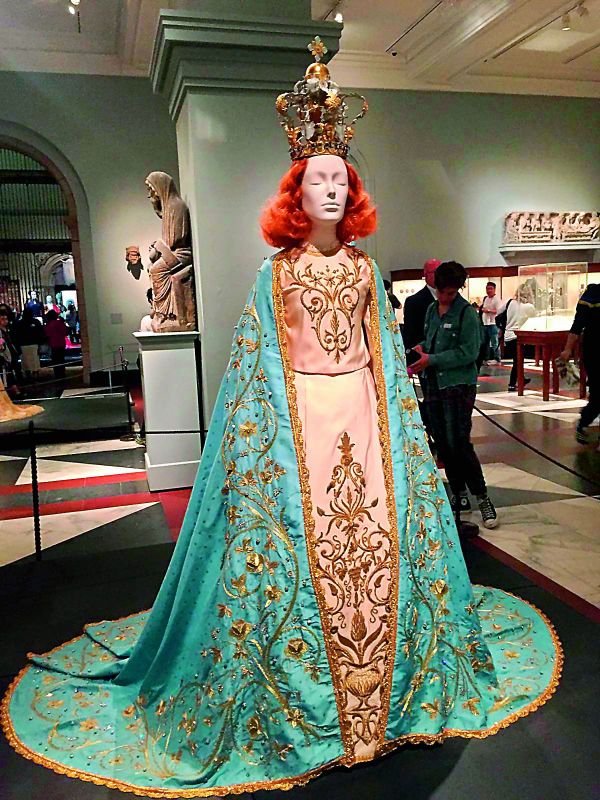 A special showing at the New York MET

Most New Yorkers love their sublime terraces, so do go to the Press Lounge, where you can see the city’s skyline, and watch the lights twinkle below... again great for a sunset tipple, or get to the many terrace bars that dot the area. Our trip to the Chelsea Market was wonderful, where we drank at the Cork Buzz, a wine bar. 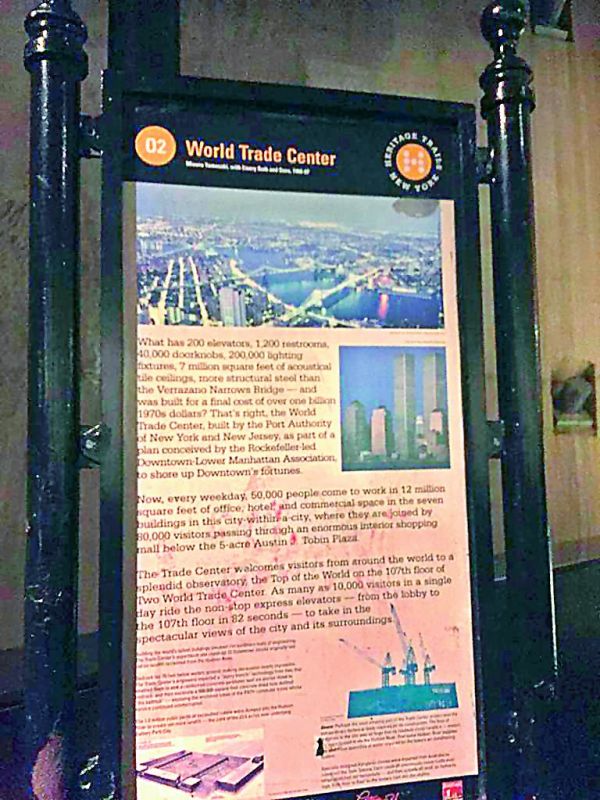 You can walk along the harbour front, and have a nice meal at the famed PJ Clarke’s which we did, and order the Frozay, a frozen sangria here, with a nice meaty burger. Now, for the more tourist travails, no NY visit is over without a peek at the Rockefeller Center which stands tall, regal, and ushers you in for a bird’s eye view of the Manhattan skyline, or to the famed Empire State building that has been the icon that many Hollywood movies have revered upon. There are time slots at the Rockefeller Centre, to ensure it does not get over crowded, and then you can get your fill of selfies atop the building after watching a movie of its history. This is the place where the iconic photograph of workers sitting on a high crane that many might have seen was taken.

We also walked many miles to the 9/11 Memorial, which has a large museum, and is flanked in the front by two large stone water reliefs with free-flowing water that gushes to its centre, disappearing into an abyss with names of the people who lost their lives written on stone slabs around both. It made us contemplative, and sad. The museum is large... replete with information and photographs, columns, iron rafters and films that give one a minute to minute account of how the tragedy occurred and the twin towers fell. The ease with which many were busy taking photographs left us with a sense of disquiet. We walked on, not indulging in such trivial pursuits.

The next on our list was the famed Metropolitan Museum or the MET. We walked in and it was teaming with people, many looking a bit overwhelmed at the large collections it houses. It had a beautiful showing of Christian art through fashion that we spent a good deal of time walking through, and it is advisable to choose your area of interest and era... as otherwise you’ll be left spoilt for choice and completely perplexed.

For our visit to the famed Statue of Liberty, we took the underground to the main office, where you are ushered into the jetty where a boat takes you to Liberty Island... if you want to get atop, its best you book earlier... as they are predictably always full up. It was a hot day, sweating profusely sipping on a giant lime soda we walked towards the Statue... taking photographs with the famed Manhattan skyline as a backdrop.

When in New York, you can’t not have a concert route, and we were privy to the last concert by Paul Simon in his playing ground Queen, where the Arthur Ashe stadium is, and for company was New Yorker Kavitha Das, and so many families sitting patiently awaiting the first strains of Hello Darkness, my old friend with Homeward Bound and Bridge over troubled waters, and so many more. The older Paul Simon has gotten, all the more prolific with a stage presence that was brilliant... as we saw older families dancing, listening and in awe... even as their disinterested children had been pulled along for a ride... with looks that said, “Paul Simon, who? Tiesto, we know!” Nevertheless, the show is by far one of my best... and the local conversations volleying between Simon and the audience were heart touching, as were the iconic songs.

You must do a Broadway Show and we went for the famed Wicked, that was spectacular... and totally worth it. Infact, there are so many to choose from, you’d be best advised to do your homework so you can plan you visit well.

Evenings are great at the Times Square, though we thought it was a bit overrated, and when the restaurants close, it’s time to visit Korea Town, where we OD’ed on delicious squid, and chicken in a wok. It springs to life after the more uber places shut shop, and you can have a delicious meal there. After you are done with the big city and its bright lights, it’s plain to see that you’ve just scratched the surface of New York, and there’s so much more that you’ll be back for. Atleast, we will.

Take a ferry to the Statue of Liberty on Liberty Island.

Walk to the Met and spend a day or two there.

Walk around Central Park, make a picnic of it.

Take a bicycle and ride around the water front of Lake Hudson.

Have a Ruben at Eisenberg’s Sandwich Shop or Friedmans, and have a Frozay at Grand Banks.

Watch a Broadway musical, there are many, and you can even get second sale and cheaper tickets online if you look hard enough!

Madison Square Garden and Central Park have many rock shows happening through the week. Get your ticket for your favourite show, and  enjoy live music under the New York sky.

There are many stand-up comedy shows that are free for a taste of the comedy scene.

The New York City Company offers tours like the slavery ones, a walk through the Boroughs, NY Heroes, Comics, the Harlem Cultural Tour, etc.