Deep South. It’s where the character of the people, richness of its history and turmoil of a heartbreaking past converse. It is also the meeting ground of French, Creole, Spanish and African cultures which creates a canvas that is exuberant, scintillating and soulful. New Orleans endeared itself with its trails. Known for the famed decadence-filled Bourbon Street, a party precinct that springs alive on Mardi Gras, it was not what three girls alone in NOLA were even minutely interested in. Ours was a journey into its history, slave trade, influences that made New Orleans such a cultural melting pot, and its friendly and musical nature. Infact, its culture trail surpassed all else. Its many-faceted past made it a destination for seekers of history. It is the place where the Mississippi River flows in all its brown silt fury... Yes, New Orleans was more of an altercation with a past, and a present that imbibes all those influences graciously. 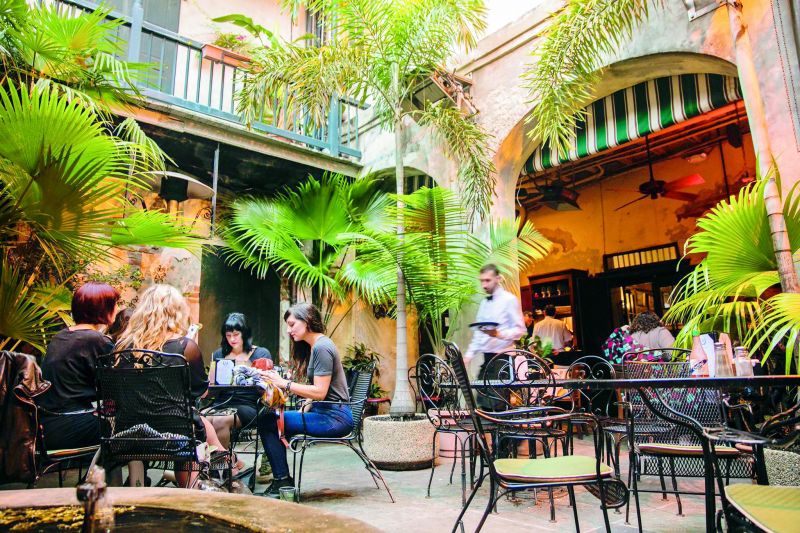 This Southern city was the nation’s largest slave market at one time, and it’s as if that part of history follows you everywhere, making you pause in your tracks to mull about the harsh lives of that era. It also offers Slave Tours to give people a peek into its history. There is even a smartphone app tour of sites involved in the slave trade during the 18th and 19th centuries. But first, if you’ve not been to this city, and are not interested in Bourbon’s debauchery, then visit this land “most unique” when Mardi Gras is not lurking around the corner (though Bourbon is still a nucleus of hedonism). We visited NOLA in September. The quaintness of a land where the French and Spanish left their influence indelibly, has moulded and seeped into its crevices. There are many tours that walk you through the painful journey of slave trading and segregation, the French and Spanish settlements and the Civil Rights Movement. All this is as much a part of its present as it is its past. There are also ghoul-seeking tours to grave yards, voodoo history, swamps apart from crayfish eating trails, battlefield tours. The most popular are the heritage and jazz tours, though. We stayed at the French Quarter in a beautiful boutique hotel. Our walking tour of the French Quarter with Tours By Steven was interesting. We ambled across the main church, the St Louis Cathedral, dating back to 1720, which overlooks the busy Jackson Square. The Cathedral-Basilica of St Louis King of France is the oldest Catholic cathedral in continual use in the US. There are various museums too — the World War II museum, Cabildo, a pharmacy museum and the New Orleans Jazz National Historical Park that embellish your learning, and add to your history lesson. The Beauregard Keyes House, the home of Confederate General Pierre Gustave Toutant Beauregard has a display of around 200 antique dolls and 87 tea pots, etc. We stopped at the house where 12 Years a Slave, the film based on the book by Solomon Northup was shot. Madam John’s Legacy House in the French Quarter doubled as the slave pen where Northup was originally held before being sold. We ambled past homes that had Spanish and French architecture, as our friendly New Orleanean tour guide, explained to an interested group the way of life during that bygone era... passing homes that were still lit by oil lamps, how one differentiated the nobel/rich homes by their added balustrades. We stopped at a beautiful haunted house... another owned by actor Nicholas Cage. Then came the famed Frenchman Market, past Cafe Du Monde that is famous for its beignets (and even has a back window where you can see the chefs busy throwing those perfect squares into hot oil before dunking them into powdered sugar). Mardi Gras and Voodoo paraphernalia dot the shops here. 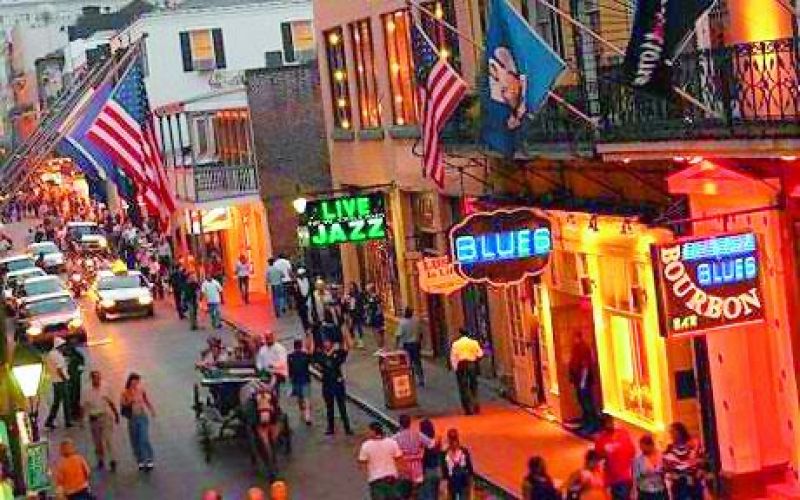 The French Market is interesting in spurts, with local artisans showcasing their ware, lots of art, sculpture, carvings, music, jazz and voodoo knick-knacks. And regular hawkers selling very ordinary t-shirts, old CDs and books. Just as you enter on the right are a line of food stalls, each serving local fare like gumbo, jambalaya, meats and crayfish... our most cherished find was one serving delicious beignets with praline stuffing. Decadent.

We used Lyft (like Uber) thanks to the two Houston residents and sisters — Shwetha and Ashita Sawhney — which made up our three girl trio. The music was what we had come for. Expectant, dressed to the nines, our wonderful evening at the Frenchman Street was memorable — strumming guitars, crooning voices, and the ease of three girls walking from one bar to another to listen to what ever took our fancy. The Spotted Cat had a band that took our breath away... and we were there early, to get seats. The soulful highs of NOLA are without doubt spectacular. Ask a local, he will point you towards the best music of the day. We jazz-hopped to Maison, DBA, peeked into many bars on our slow traipse. 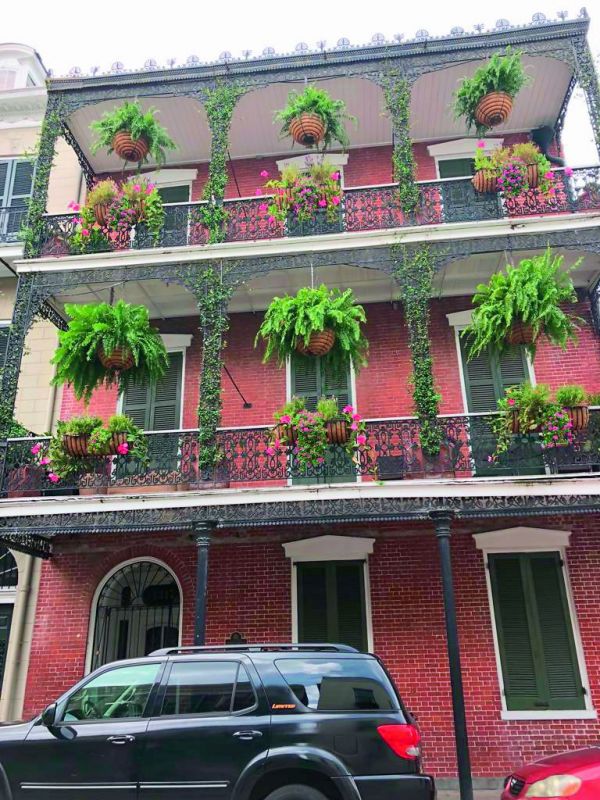 All thanks to my cousin Shwetha’s exhaustive search for a perfect itinerary that fit three girls alone in New Orleans. Safe, satiating our culture urges, and planned to the T! Visit the art market at the Frenchman’s Street that has eclectic jewellery designers, poster artists and painters — they make for great momentos. Or visit the many boutiques that dot the area... The air is ringing with musical strains and friendly folk who are proud of the city’s rich and vibrant character.

We stopped for a late lunch at Napolean House (which was intended as the residence of Napolean Bonaparte... who died before he could reach here). It has been turned into a restaurant where they serve a mean Gumbo, and a delicious muffulata (stuffed with olive salad, mortadella, salami, mozzarella, ham and provolone). It was created in 1906 by Salvatore Lupo, the owner of Central Grocery Co. in Nola. Delicious. Old books, letters, maps, object d’art are strewn across this bustling cafe that also has a quaint courtyard in case you want to experience the humid and hot September weather! We also had the famed Pimm’s Cup, a cocktail. Incidentally, the word cocktail is of Nola origin, we heard that thanks to a Bengaluru Frenchman who is a storehouse of culinary knowledge. Legend has it that an egg-cup or coquetier was mispronounced as cocktail and it stuck — A New Orleans apothecary Antoine Amédée Peychaud used to serve brandy mixed with his bitters in eggcups in the late 18th century!

On our last day, we treated ourselves to a hearty breakfast at the Ruby Slipper, which serves only breakfast, shuts by lunch, and see long lines of people waiting their turn. You’d be well-advised to go there early, get your name on the wait list, download their app, and then go sightseeing or knick-knack picking to the many praline shops around for toffee and candy... or Mardi Gras-inspired outfits. We did just that, and an hour-and-a-half later, we had our table and ordered a sumptuous Southern breakfast fit for a Queen... eggs benedicts on a southern biscuit, or gravy, loaded with meat, cheese, and sweet potato and pumpkin pancakes... Phew! On a meal-induced stupour, we headed to the New Orleans Botanical Gardens at City Park, where we spent an idyllic afternoon walking through its green expanse, taking in the works of Mexican-born artist and sculptor Enrique Alferez. We stopped for a longer while at the Sydney and Walda Besthoff Sculpture Garden which had the most emotive and creative installations. We also peeked into the Conservatory of the Two Sisters which had an exhibit on living fossils showing many types of prehistoric plant life, fossilised foliage, etc, and then browsed through a vegetable garden that had — wait for it — purple okra which we marvelled at, till we heard the whistle of a train. Next door, was a Train Garden, miniature trains running on a track dotted along the layout of the City of New Orleans. It follows the course of the Mississippi River. Manned by an able crew who control traffic, we had an interesting chat with the caretaker there.

Our rendezvous with Nola could not have been complete if we had not hopped onto a dinner cruise on the Natchez — through history these steamboats have raced along the muddy river... all called Natchez. The Natchez IX  (and there were many) featured a steam calliope that can play 32 notes. The thrill of watching a huge steamboat regurgitate water was amazing, and so were the loud shrill whistles as it passed the city’s sights and lights... The obvious pride of its crew as they went about their smooth functioning was apparent. It had rained that day... so it was a relief from the humidity. A band played soulful jazz as we tucked into a meal of Louisiana favourites — gumbo, pork roast, beef roast, bread pudding, etc. New Orleans was much more than we had imagined, and there is still so much more to unearth. For now though, the strains of NOLA, and its rich cultural landscape has three girls in ‘NOLA’ LA land, with wide smiles on their faces.