It was in Pune where Eugeneson Lyngdoh decided to put a hold on his engineering ambitions and give his football career a face-lift. Ten years later, it is the same city where he had rubbed shoulders with the best in the Indian Super League.

The midfielder from Shillong has been a revelation in the past few years, emerging a vital cog in the mid-field for the teams he played for like India, Bengaluru FC and FC Pune City in recent times. He won AIFF men’s player of the year award recently.

Eugeneson has played for his college and a club in Pune earlier but he donned the shirt for an I-League club Rangdajied United and then went onto play for 2013-14 I-League champions Bengaluru FC and won the best Indian player of I-League in the 7th Indian Football Awards organised by Footballer Player’s Association last year. 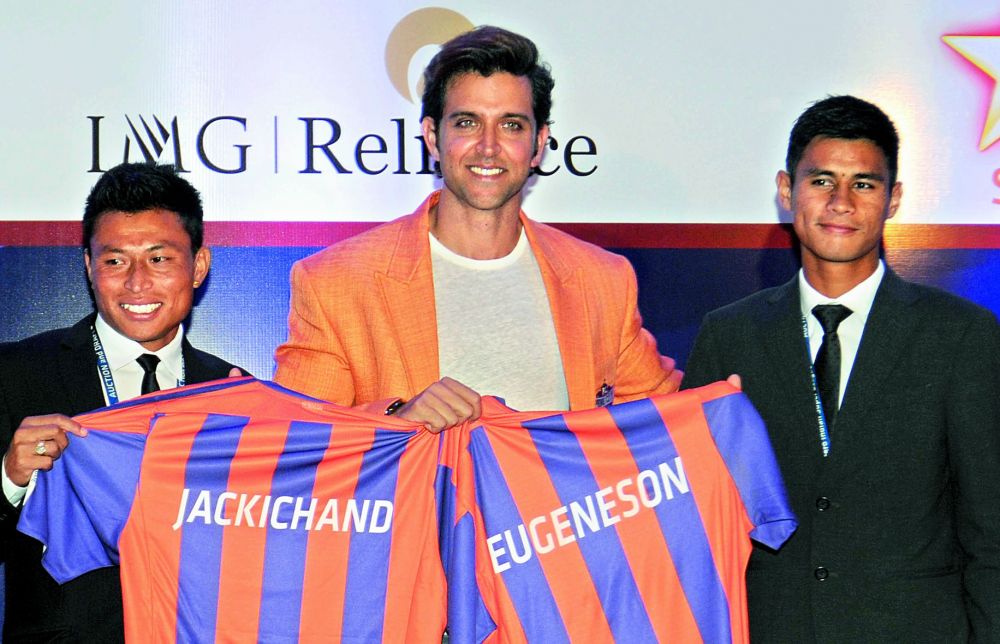 With Hrithik Roshan at an event

Fortune changed for the lad when he went for a whopping Rs 1.05 crore — `77.5 lakh more than his base price at the ISL Indian players auction in July 2015. He was the second highest Indian to fetch a huge price after Sunil Chhetri’s Rs 1.20 crore. The 29-year-old scored two goals in ISL.

“I’ve had a lot of good memories in Pune and they were all greatly cherished, and it got even better representing the city in FC Pune City colours. The orange army coming out to support us in thick and thin was awesome. And when they came all the way to Goa, that was unbelievable. They made me feel special. I’m a little disappointed that I couldn’t help the team through to the semis,” he recalls.

After doing well for Bengaluru FC for two seasons and realising his dream playing for India earlier in 2015, he had a life-time experience to appear for FC Pune City in his debut ISL season.

“It’s been a fruitful experience even though we didn’t go too far this season. Physically and mentally, we have to be prepared no matter which league we play in. I’ve learnt a lot playing alongside foreigners, and playing under the coach. As a person, I believe we’re never too old to learn,” he said.

Football was something that came to him thanks to his family from an early age. “I have three siblings, two sisters and a younger brother. I grew up in a family that loves football. My father was a player himself with Ar-Hima FC and I grew up watching my dad play in the Shillong league and started playing at a very early age. If I remember correctly, I played my first ever competitive game when I was in fourth standard (inter-class) and ever since, football has been an integral part of my life,” he adds.

During off-season Eugene likes to stay home and strum the guitar. “I’m a guy who likes to stay at home and hangout with close friends. Back home, I’d normally go cycling, play with my nephews, niece and kids of the locality. Sometimes, I spend evenings wandering in the wilderness. I like music and playing the guitar. And my family and friends and my music keep me happy when injuries frustrate me,” he says.

North East, like Goa and Kolkata, produces talent in abundance and it wasn’t easy for Eugene to cope with the competition there. “There is an abundance of talent back home. Making a name in the local league is what we aim for. Then people begin to take notice of who you are. The Shillong league is a tough one as many players have made the cut for the national side through the Shillong league. Aibor, Rocus, Marlangki, Jacki, Seityasen are the few names. The Shillong league has a number of followers with Royal Wahingdoh, Shillong Lajong and Rangdajied United being the champions in the last decade. There is stiff competition and lots of youth coming up,” he ends.

David Platt FC Pune City coach says: He is right up there in terms of some of the most intelligent players I’ve worked with. He displays on the pitch professionalism and understanding that is exceptional. He has pictures in his mind, his feet are so clean, they’re very good. He is an absolute star in my opinion and so is Jacki.

DWAYNE ‘THE ROCK’ JOHNSON: At the University of Miami’s championship team, Johnson played briefly in the Canadian Football League. His is known for his episode in That 70’s Show. The Fast and Furious, etc.

CHUCK NORRIS: We all know Chuck Norris but he was a real-life championship Karate athlete.

JASON STATHAM: The ultimate movie tough-guy with films like The Transporter, not many know that Statham was a member of the British National Diving Squad for 12 years

STACY KEIBLER : Keibler (pictured right) was a hugely popular wrestler for the World Wrestling Federation. She dated George Clooney for a few years and acted in a few TV shows.