To serve with immense belief

For someone who has always been a fan of the sport, and remained optimistic about succeeding at the highest level, winning a prestigious tournament at his/her own backyard would certainly be a dream. Jeevan Nedunchezhian recently managed to accomplish this, as he, along with veteran tennis star Rohan Bopanna, became the doubles champion in the recently concluded Chennai Open 2017. Apart from being understandably elated, the Chennai boy has already started working towards achieving long-term aspirations. In a chat with us, Jeevan opens up about his career, his family’s influence in keeping him motivated, and his future plans.

Starting the conversation about his exploits in Chennai Open, he says, “Validation — that was the feeling right after the last point. It felt like a huge sense of approval for all the work and effort I put in on that very court, after hours of sweat without a person in the stance, and later, coming back a full circle, as we (Jeevan and Bopanna) lifted the trophy in my back yard! Hard work pays.” Speaking about his affinity for the game, Jeevan says, “I began playing tennis at the age of five! Even during the final exams in school, my favourite way of de-stressing was hitting tennis balls against the wall.”

Jeevan also feels that, as a sportsperson, it is absolutely necessary to have family backing — “I think it is very important for anyone who wants to be a sportsperson in a country like ours to have their family behind them because the journey is very long and difficult — not just financially. I consider myself extremely lucky as my family has always supported my dreams and allowed me to follow my passion. Regardless of my results, my mother always made me believe in myself, even when I had doubts,” says the champ. His family’s trust paid off very soon as he had an impressive career as a junior. Jeevan represented the country in all the junior categories before reaching a career high of 9 in the ITF junior world rankings. 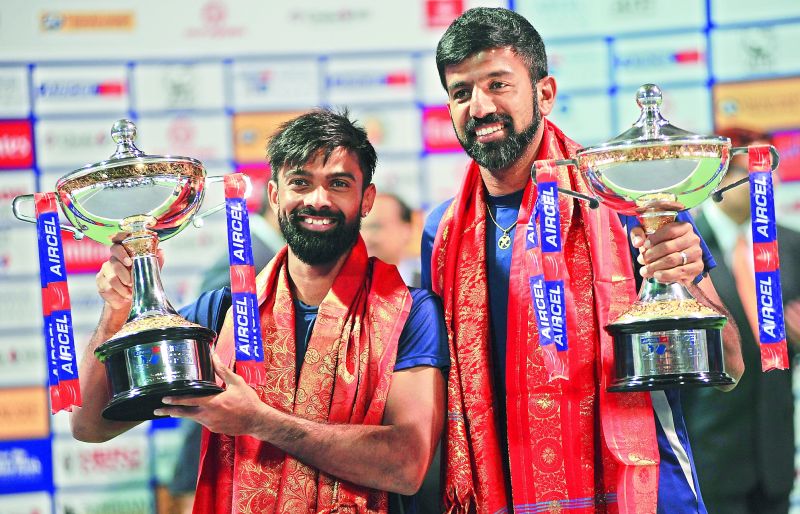 He finally decided to make it his professional career during his senior year at the University of Washington. “It was during an important conference match,” he reveals, continuing, “It was also one of the last few matches left in my college career. We had a great win, which was incredibly emotional for me as my grandfather passed away during that week. My coach looked at me and said that I would have made my grandfather proud. That was when I realised that my tennis career had a lot more years to go. My head coach then, Matt Anger, and assistant head coach, Chris Russell, helped me mature as a tennis player as well as a person,” says Jeevan.

The Chennai-based tennis star takes both success and failure in stride, “I think winning the Chennai Open has been my biggest achievement to date. But, there are no regrets in my journey — I always believe that once a player has put in the work for a tournament, for a circuit or for a season, irrespective of the results, the feeling of regret never occurs. I can look at myself in the mirror and say that I have given my best. I also believe I have been a true professional; I can’t think of any tournament for which I could have done better,” he adds.

Being candid about his strengths and weaknesses as a player, he says, “I like using my forehand and my serve to create an advantage in points. When I step back and look at my game, I am constantly trying to improve in every aspect of my strokes. There isn’t one glaring part of my game that needs to improve. There are many things which I can see improving when it comes to doubles — it’s the beginning of my second year on the doubles tour so there’s still a lot to be learned and worked on and I’m excited about all those challenges,” says the tennis lover who feels his immediate and future aspirations are, “Having just cracked the top 100 (in doubles), my next goal would be to crack the top 50 which would assure my main draw entries in Grand Slam events. I also wish to stay healthy and become more explosive on courts.”