Running against the odds

From winning medals for India to being confined in solitude, all within a span of a year, and now realising her Olympic dream, life has come full circle for Indian track athlete Ashwini Akkunji. The ups and downs of the sport have only made her stronger, she says, as she determines to go for glory one more time, and August 20 was that judgement day — the date of the 4x400 relay at Rio.

Hailing from an agricultural family in Udupi, Karnataka, Ashwini loved running in the fields of her hometown, even as her father encouraged her to take up the sport. Starting off as a sprinter, she also tried her hand at 800 m running, before the lanky athlete finally settled for 400 m. “I was good at running during my school days. My father sent me to a sports school in Bengaluru and my first medal came in the form of gold in the 400 m in 2001 at Bhubhaneswar,” she recalled in an interview that went into print before her relay. 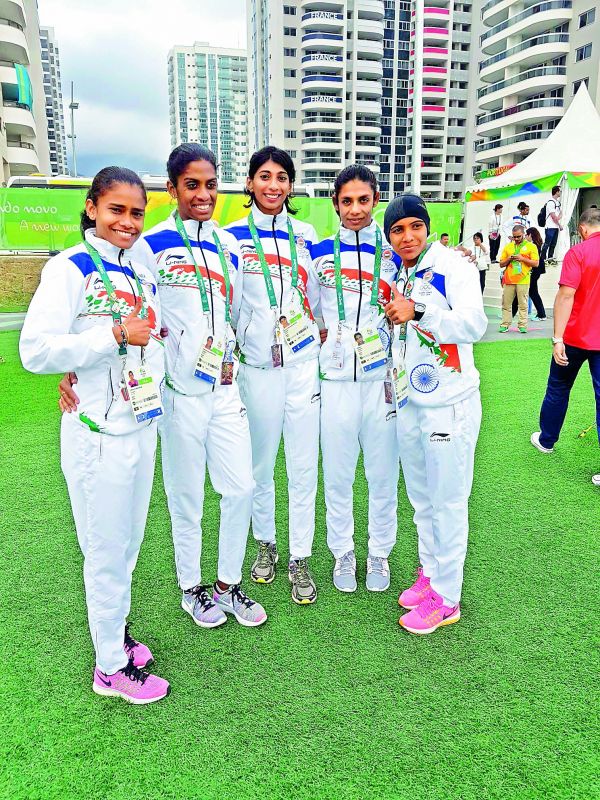 Difficulties came her way even as she pursued a not-so glamorous sport as a simple village girl. Ashwini, however, chose to sprint forward, and never look back, even if it meant making changes to her life. “Due to the lack of coaching and financial problems, I had to migrate to other states to pursue my sport,” the 28-year-old athlete sighs.

All the hard work she put in came to fruition when she won an individual gold in 400 m hurdles at the Guangzhou Asian Games in China in 2010, becoming the darling of India. She was also a part of the women’s 4x400 m relay team that won gold in the same event, alongside Manjeet Kaur, Mandeep Kaur and Sini Jose. The Asian Games glory preceded a gold-winning effort in the women’s 4x400 m relay team event at the Commonwealth Games (CWG) in Delhi.

“The CWG gold has been the happiest moment for me; Winning a gold in a big event in front of the home crowd is a different feeling altogether,” Ashwini reminisces. Pundits labelled her the next big thing to happen to Indian female athletes after PT Usha. Ashwini was also nicknamed Gensale Express — named after her native village — and it became synonymous with her achievements. Dark days soon followed the glory, and it almost seemed like it would push her life to the edge and spell an end to her career.

Just prior to the Asian Athletics Championship in Kobe, Japan, in 2011, Ashwini tested positive for anabolic steroids. The athlete, along with six others — including two of her relay mates — were handed a ban of two years. “It affected me badly, mentally and emotionally. My approach towards life changed completely,” she recalls, rueing the brunt athletes have to bear on doping charges, while other people related to the team escape accountability.

The ban on Ashwini was lifted in 2013, and she participated in a few national and international tournaments, all the while training hard in Patiala, Bengaluru, Poland and Turkey, to qualify for the Rio Olympics. The immense hard work against all adversities paid off when Ashwini was included in the 4x400 m Indian women’s relay team which raced on August 20 (before the race). The team also consists of Debashree Majumdar, Jisna Mathew, MR Poovamma, Nirmala and Anilda Thomas.

Ashwini is positive that her participation in Rio will be a turning point in her career. “This (Olympic qualification) will help me forget the past and will bring out my best,” beams Ashwini, adding, “My morale will be up. My parents are happy for me; the Olympics are a dream for every athlete and my dream has finally come true.”

Ashwini had to battle problems in her personal life and injuries since last year, even as she made a determined bid to qualify for the Olympics; she even sacrificed participating in her individual event. “I’m not doing 400 m hurdles right now due to trouble in my gut. I’m focusing on the relay,” she says.

The five feet, 10 inches tall athlete wants to continue for as long as she can, but already has career options in mind, post-retirement. “I just want to do my best. Athletics is my passion and as long as I can avoid injuries, I will continue. If I get a chance to pursue modelling, I will do it, even acting,” she signs off, with a smile.

Her inspiration: Every person has his own struggle in life. We should be inspired by such challenge, so no particular person.
Favourite cuisine: Mangalorean fish curry.
Favourite sportsperson: Justin Gatlin
Favourite actor: Shah Rukh Khan, Kangana Ranaut and Priyanka Chopra.