Only last year, she experienced one of the most heart-breaking results of her career as she failed to secure the Rio Olympics quota place by a whisker. But instead of finding excuses, she started preparing for the Tokyo Olympics 2020 that very same day. Owing to her determination and hard work, Pooja Ghatkar, came back with a bang by clinching the bronze medal in the 10m air rifle at the Shooting World Cup held in Delhi last month. In a chat, the 28-year-old shooter speaks about how she chose shooting as her profession, her mother’s influence in her career and about her mentor and former Olympic medallist Gagan Narang.

“I’m very reserved by nature,” Pooja says, adding, “I studied at Muktangan English School and Junior College, Pune. After Class 12, I switched from science to commerce for graduation — so that I can dedicate enough time to shooting. I lost my father at the age of seven, and since then, I have been brought up by mother Bharati Ghatkar.”

Speaking about her budding stages in shooting, she says, “When I was in Class 9, I won the gold at the All India Thal Sainik Competition. But by then, I wasn’t even aware that ISSF shooting and NCC shooting were totally different. In fact, I didn’t know that national or ISSF shooting existed during that time — hence I focused on studies. After I completed schooling, my mother, who was also a sportsperson during her college days, came to know about ISSF and secured my admission at one of the local clubs. Initially, I found it hard as I neither had enough knowledge about the sport, nor the support.”

In 2008, Pooja participated in her first national competition and the very next year, she was selected to participate in the Asian Air Gun Championship, Doha, in the junior category, and the team won gold. She says that she started taking the right strides after the junior competition. And in this period, she also evolved as a sportsperson. “As I started shooting from a small club in Pune, there was no one to teach proper shooting. Hence, I was weak at basics. But because of my good performance throughout 2009, I got admission at Kreeda Prabhodini, a sports academy run by the Maharashtra Government at Balewadi Stadium. 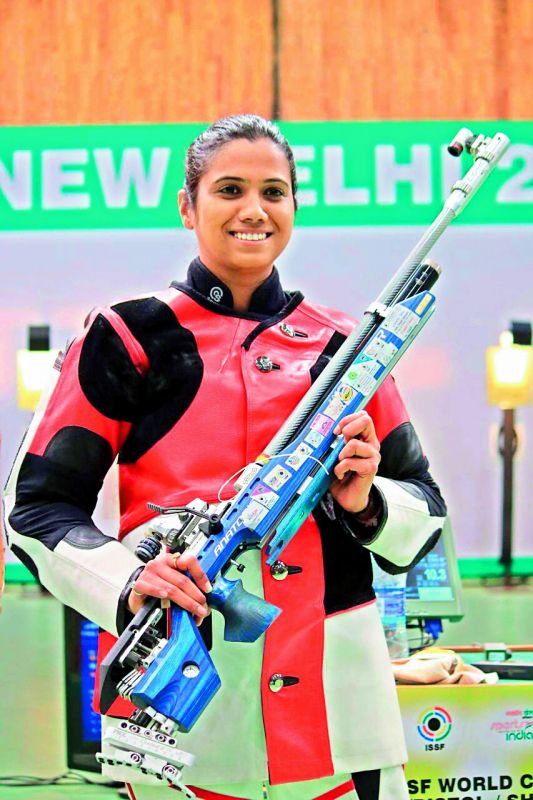 “During the same period, all the senior shooters used to have their coaching camp at the Balewadi shooting range. I learnt most of my shooting by observing them. By 2010, I got into the Indian team, where I slowly began to understand shooting and the equipment required for the sport. I gradually started improving with the help of officials and the foreign coach present at training camps. Also, Olympic Gold Quest started supporting me. It’s only because of their motivation, that I was able to focus on shooting professionally. Since 2011, they have been my core supporters,” she says.

Pooja grabbed eyeballs by winning the Asian Air Gun Championship in Kuwait, 2014. She also considers it to be her biggest achievement till date. “It was not because of the gold medal, but it was satisfying because I won it by defeating 2012 London Olympics gold medalist Yi Siling of China!” she says proudly.

When asked if she feels she could have performed better in any of her earlier tournaments, she says, “Honestly, I am happy with whatever I have achieved. I am satisfied with my performance as it is constantly improving. I always keep this in mind — I didn’t even know that shooting shoes were required during my first shooting national championship. But with all these struggles, I have learnt and progressed. After each match, irrespective of winning or losing, I have more scope to improve. After every match, I start working on things which I feel were lacking during earlier performances.”

Sharing how she coped with the Olympic disappointment last year, she says, “During the quota qualification, one shot of 8.8 ended my 2016 Olympic dream. I was obviously very broken and upset. It seemed like my shooting career had ended. But by God’s grace, I had so many people who believed in my ability and stood by me. My mother, Gagan Narang and the entire Olympic Gold Quest team supported me and helped me overcome this. They made me realise that this was not the end, and in fact Olympics is just one part of a shooting career.”

The shooter also claims that she was getting restless as she couldn’t achieve what she had aspired for in 2016. While she is happy that the world cup bronze medal came at the right time, she adds, “I had a lot of misses in 2016 and I wasn’t getting where I wanted to be. In the world cups at Bangkok and Baku, I finished fourth in the finals. And in the world cup at Munich and Rio, I missed the finals by a few points. I was very restless with these performances. But in the Delhi world cup, I gave my best. Also during the finals, my blinder fell into two pieces at 16th-17th shot, and I had no time to fix it. I had to forcefully close one eye, and shoot the remaining shots. I’m happy that I was able to improvise and got good results.”

Pooja is all praise for former Olympic medallist and mentor Gagan Narang. “He is one shooter who is always ready to help everyone. Even during this world cup, I applied whatever tips he had given me — this win was possible because of him. Whatever inputs he had given me to improve has helped in my shooting and he is the most technically-sound person I have met. I am happy that we started working together,” she says.