Hardik vadhaiyan to the Blues

On the evening of March 23, Team India were a worried lot. Opponents Bangladesh needed 11 runs off just six balls and Skipper Dhoni had on, his usual frown. His team had to win and from the far corners of the stadium, he called upon the services of Hardik Pandya. The Skipper’s briefing was straightforward — ‘do your job’.

What transpired during Pandya’s over has brought India to where it’s now in the World T20 tournament. Dhoni has strategically summoned the controversial choices to finish off crucial overs. Pandya on March 23 joined that list and to everyone’s joy, the Bangladesh side lost three wickets in the last three balls of Pandya’s over.

“He didn’t tell me much. He just told me ‘bindaas kar’ (bowl without any fear) because he knows that if I do something with confidence, I would get success. He gave me full freedom to bowl the way I wanted to,” Pandya was quoted as saying by BCCI.tv.

Hardik Pandya’s story begins in the lanes of Baroda. The 22-year-old’s father, Himanshu Pandya, spoke to this correspondent over phone, providing insight into how a boy, who never made it to the other side of the all important ‘10th standard’, is now the country’s toast.

“”He was not a brilliant student in school. His priority was watching and playing cricket. He also had an interest in football to some extent. Later, he tried distance education, but without success. He was and is still busy with his cricket schedule and doesn’t get time. The current generation of players have to chose between the two (studies and cricket) and he chose to become a professional cricketer. So be it”, the father added. And the father is also a proud man.

“More than a simple cricketer, my son is a fearless man. He loves challenges and his enthusiasm is evident when he succeeds on field. He jumps in the air, dances with joy and celebrates with his colleagues when he takes a wicket or lands a superb catch,” says Pandya’s dad.

Talking about the early days he adds, “Hardik started playing the game at the age of seven. One day, he was spotted by Kiran More and the latter invited him to join his academy the next day. Hardik has never looked back since then. His elder brother, Krunal, also a cricketer, has been providing him the necessary support. Both have been playing IPL matches and we are proud of them.”

Hardik and Krunal Pandya’s sister, Anamika, stays with her son in Ahmedabad and works with a hospital. With fame comes attention and Hardik seems to be getting some from a Kolkata model Lisha Sharma. Reports claim the cricketer and the model have known each other for over a year now and that they were spotted hanging out in Kolkata recently (during the India-Pakistan match in the city). There was even a photo of them both with the hashtag #taken, marked below. 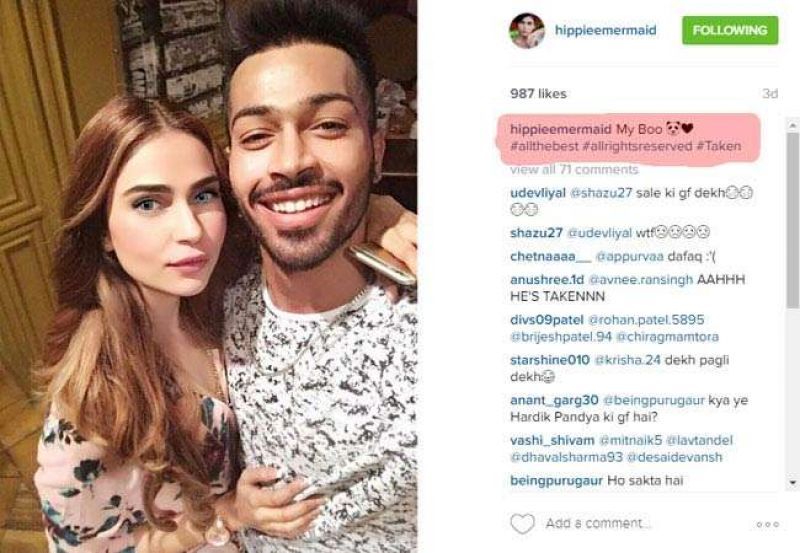 The post was also had hashtags #AllRightsReserved and #Taken, speculating if the two are very much together. (Photo: Instagram)

Himanshu Pandya meanwhile, has left it all to his son — even as he maintains the son is “still single”.

“Hardik has never discussed this with us and we don’t ask him either. He is just 22, and knows he has his elder brother (Krunal, aged 25) before him. Yes, Hardik has lots of fans, which include girls too... but that’s it. Both my sons are single,” says the father.

For now though, the family is celebrating with neighbours and friends each time there’s a match. “We all sit in front of the TV together. My daughter comes from Ahmedabad, with her son and we all watch matches whenever Hardik is playing and our neighbours celebrate too whenever Hardik has hit a boundary or has taken a wicket. There’s a lot of cheer around us and sweets are sent out whenever India wins,” says Himanshu Pandya.

■Hardik Pandya is ‘taken’ by a sexy Jamshedpur model
■India beat Bangladesh in a thriller, fan dies of heart attack
■An over to remember for Hardik Pandya
■Mahendra Singh Dhoni goes gaga over Hardik Pandya
■Poonam Pandey’s ‘small gift to India’ after win over Bangladesh
■India vs Bangladesh: Did Ashwin ask Pandya to 'cheat' in the last over?
■Video| What did Yuvraj Singh call Hardik Pandya?
■ICC World T20: India deny Bangladesh, sneak through to heart-stopping 1-run victory