It’s a book that dwells on love and longing, on abuse and acquiescence. Eating Wasps has literal connotations as the narrator had eaten wasps as a child. But the metaphor is not lost on us as the book evolves. It’s about different women, who swallow the bitter pill of varied emotions, as their lives fall apart. The main protagonist is the thread that binds these women as she peeks into their lives, in the guise of a ghost. 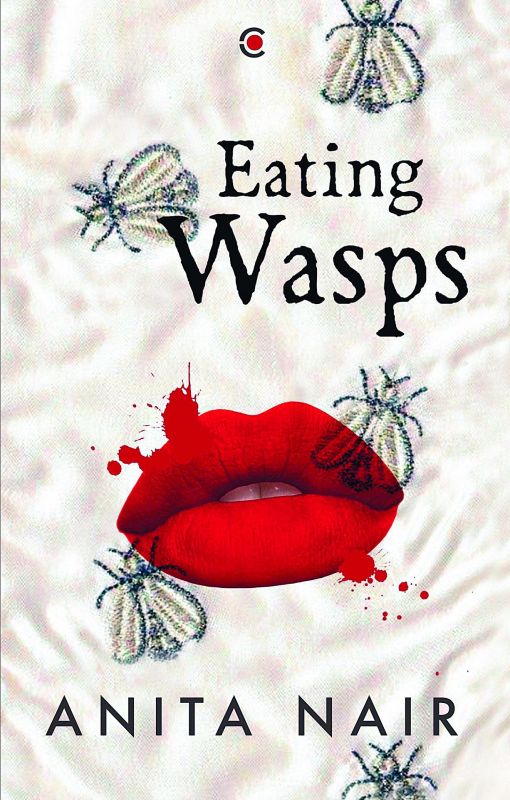 The author has touched upon every contemporary issue that ails women in the post-modern world, from child abuse, to acid attacks, extra-marital affairs that spin out of superfluous dating apps. There is more, the perils of social media and how one innocuously posted picture can wreak havoc in someone’s life is also well-portrayed.

Anita has sensitively used each of these characters to dwell on touchy subjects.

In many ways, it’s a dark book, it explores the ugliness that explodes in the lives of many women, most of whom silently suffer or perhaps continue eating wasps. What made Anita Nair choose these stories? “I wanted to explore once again the lives of women. It has been 17 years since Ladies Coupe was published and if that book was about women finding their identity, I wanted Eating Wasps to be about women preserving their identity despite the constant challenges they have to face on numerous fronts, be it patriarchy, misogyny, the male gaze or even technology. And especially from within themselves as the world we live in today ceaselessly drums in tropes on how a woman may be or may not be, and what she may or may not do.”

The book offers slice of life vignettes into the dreary, dull and unhappy world of 10 women, and it seamlessly follows their lives, though none of them are connected to each other. They are all strangers but bound by one common factor: Pain. You wonder if the author has deliberately chosen to focus on the negatives because it makes for a greater impact.

“There is no conflict in happy stories and besides which one of us can claim that we lead a life free of challenge or conflict? Each of these stories addresses a different dimension of what women have to put up with. In that sense, it appeared very organically for me. I definitely wasn’t seeking to make an impact but there is no escaping that women have to deal with many of the challenges I have woven into the book. Also, not all stories have unhappy endings. Some of them are about how women surmount the bad hand they have been dealt and move on,” explains Anita.

There is no denying that this is a thought-provoking novel. The unhappiness lingers long after one has finished reading the book. It makes you wonder whether Anita was plagued by dark moments herself, as these characters must have lived in her head for a long time. She admits, “With Eating Wasps, I had to look within and gaze at my own darkness to understand what my characters were going through, and then use it in my writing. In that sense, it is perhaps my most courageous book. The unflinching gaze took a huge toll and this book exacted a heavy price.” How do you detach after writing an intense novel? “It wasn’t easy to detach myself from the writing of the book. I took ill, and took a while to recover. But slowly a glimmer of brightness started appearing, and my mind sought other stories to dwell upon,” she says.

The opening chapter touches upon the much-debated subject of parapsychology. The concept of the protagonist Sreelakshmi’s soul lingering on earth and experiencing reality as a being from the other world is dealt with tremendous sensitivity, compelling the reader to think of the afterlife. Does Anita believe in this concept or was it merely research for the novel? “It really is a grey area for me. The logical scientific side of me thinks ghosts and the after-life is nonsense. But the other side of me that still can’t fathom where ideas appear from or the vagaries of destiny or the power of intuition knows that there is something out there for which there is no rational explanation or proof,” she confesses.

The novel is set in Kerala-— most of the author’s books are predominantly based in this state. Is there a comfort factor in going back to her roots?

“I guess as someone who spends a fair amount of time in Kerala, I understand the place better than I do anywhere else. And I am fascinated by everything about Kerala and how it still is a mystery to the rest of the country. To most people Kerala is defined by a series of images — the backwaters, ayurveda, the Chinese fishing nets, houseboats, Kathakali, Karimeen etc. However the real Kerala escapes them, and it is this I try and explore. With Eating Wasps, I needed a location that would facilitate the seamless weaving of different stories. Since I had already created a resort Near the Nila in Mistress, I thought I should use that rather than recreate another one,” she adds.

The author has kept the narrative alive by touching upon many contemporary issues-child abuse, acid attack, online romances, terror attacks and social media perils. But she has managed to weave these topics in a very natural manner instead of turning them gimmicky best-seller concepts. You can’t help asking her if she chooses these topics as they would find resonance with the millennials? “No, it was a natural flow. Ian Rankin, the Scottish crime writer once described me as a state of the nation writer. I think, it is a perfect description of the kind of writer I am. Someone who seeks to lay bare what is going on around me. So these subjects were what troubled me, and I wanted to be able to discuss them. It wasn’t meant to appeal to any particular group of readers,” she says

There is an honesty and a sense of purposefulness that ensures that Anita has not fallen into the trap of merely pleasing her readers. For instance, the sex scenes have been handled with maturity and restraint, ensuring that it doesn’t read like porn. Does it become a challenge when it comes to portraying intimacy in a mature manner, without making it appear gimmicky? She agrees, “Yes, writing about intimacy is an artform in itself. It is so easy to cross the line into titillation. However for me, the sex scenes whether it is brutal sex or a poetic coming together of two people has a definite purpose in the story and so I treat it with violence, dullness or lyricism depending on the scene and situation.”

There are some gritty and uncomfortable moments in this novel. The chapter on child abuse is stomach-churning and fills you with disgust. How challenging was it to work on this story? “It was the most difficult story to write along with Sreelakshmi’s. Having to imagine what Megha felt and went though is perhaps one of the most horrifying things I have inflicted on myself,” she says.

Finally, while many authors tend to take a break, Anita doesn’t. “I have a compulsive need to tell stories which is why I write as I do. It helps that I am disciplined which is why the books gets written. I have bad writing days but I am yet to face a writer’s block that stretches over a long period of time.”

And yes, she is already working on her next book, based on the Inspector Gowda series? Does Anita Nair ever take a break? “When you love something, you don’t take a break from it. When you need to write stories just as you need to breathe to be alive, how could I pause?”