Of people and their stories

The book — an allegorical, philosophical as also eccentric tale, takes an imaginary look at a life that could have been through the eyes of a woman. In it, the characters brush past other victims of violence and horror, and wade through The Sea — a space where everything lost exists — objects, thoughts or even people.

There are a few acutely shameful incidents that can bring a nation to its knees, like the way a cold December night in Delhi did. The brutality that Jyoti Singh faced after boarding a bus on December 16, 2012 has sadly become India’s most defining story of the past decade, with any reference to the gory details still capable of physically sickening anyone compelled to hear it.

The crime was largely seen as a regurgitation of the filth that lies  buried in our country’s dark belly — where violence against women and toxic masculinity flourish. Despite the deafening noise around the incident for days through debates, documentaries and films, there were also large uncomfortable silences.

In his book, The City and the Sea, author and chief editor of a national daily Raj Kamal Jha looks at one of the biggest such silences involving “our own complicity and how we raise our sons”. 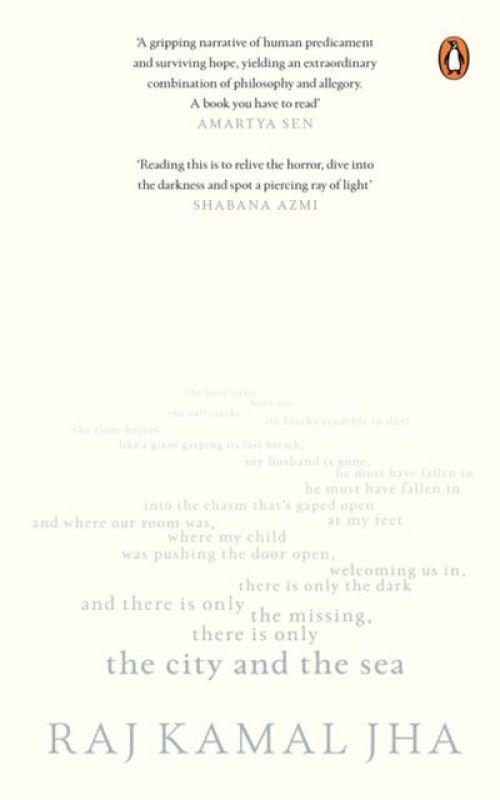 In his fifth novel, the fictional afterlife of a rape victim begins in a decrepit New Delhi neighbourhood, where a boy waits for his mother to return home from work. In a parallel narrative, a woman shows up in a deserted hotel in a snowy town in Germany on the Baltic Sea coast, with her is memory fading. Though worlds apart, the woman and the boy embark on a nightmarish journey over one night, through the lost and the missing and the living and the dead, till they meet in a heartbreaking scene.
Written with light, crisp sentences, and an interesting play of words, the book is a compelling read as it also speaks of hope. Brilliant descriptions of characters and scenes, and use of words such as “squished squashed” and the description of a Santa Claus, whose body and breath were like “food gone bad, old winter sweat. The odours of damp and burn,” keep the reading light even if the context is not.

The book — an allegorical, philosophical as also eccentric tale, takes an imaginary look at a life that could have been through the eyes of a woman. In it, the characters brush past other victims of violence and horror, and wade through The Sea — a space where everything lost exists — objects, thoughts or even people.

As the protagonist of the book, Ma explains to her son — “The Sea creeps up on you, just like that. Through the countless things that make it up. Things we throw away... the things we lose. Not just things but people too. The Sea shelters the lost and the missing. All this The Sea traps in its endless depths.”

A philosophical view of the incident also looks at suffering and at whether forgiveness is the only way to stay human. Therefore, December, the juvenile rapist gets a prominent back-story and almost a sympathetic look at his fictional life and the circumstances which turn him into who he is.

As author Jha says, “I do think that the way to remain human is to listen to the stories of other people. The perpetrator dehumanises his victim. The only way to fight back is to ensure we don’t do the same.”

With several victims of violence crossing paths with the central character, one starts to wonder if it is suffering that binds all of them together. “We read the Lanka attack as news, we think of the number 321 as the death toll. That’s what terror does. It de-personalises, de-humanises, and reduces violence and tragedy to a number or a series of images,” explains Jha as he adds, “Take the Sandy Hook shooting incident. It happened just days before the rape in Delhi, where five-year-olds were killed in their classroom. The very nature of the newsroom makes us confront these stories on the same page, literally and metaphorically. That’s what made me think of The Sea where the spaces between these stories disappear, where people flit across stories, meet and talk to each other.”

The engaging narrative also has themes of hope running through it. But from the night of 2012 to the present #MeToo movement, one can’t help but wonder if we really have come a long way.

Though the author says we still have a “long, long way to go”, he believes at least one silence has been broken. “A vital first step is people telling their stories, people standing up and not being scared of the consequences. Then there is the big picture, the fact that more and more girls are going to school, more of them are staying on in colleges and going to work. More women in the public space are going to put more pressure on the need to keep it safe. I am hopeful,” says Jha.

Nobel Laureate Amartya Sen calls The City and The Sea “a gripping narrative of human predicament and surviving hope, yielding an extraordinary combination of philosophy and allegory.” But what is it that Jha would like the reader to take away from the book?

“Not for me to specify, that’s the reader’s right and a writer has no role to play in that. But as the book’s first reader, my takeaway was that each one of us has stories. As one of Herta Muller’s characters says it so well, ‘a story is a bandage that we dress our wounds with’. I think sometimes stories also help heal that wound,” he sums up.