‘Healed’ with a purpose

Her voice sounds feeble on the phone. But as the conversation evolves, there is an inner strength and an indomitable spirit that shines through in her responses.

The Bollywood actress and cancer survivor’s debut book, Healed is a moving account of her battle with Ovarian cancer — one she has successfully overcome after being cancer-free for six years. But it still can’t be easy to recount those painful moments? “The memory is  slowly fading, easier to deal with it now. I also realise the importance of sharing my story coz’ only then people will understand what a cancer patient goes through. It’s also good to remember what all I went through because the human tendency is to forget bad memories. The protective layers of the mind, enable us forget the traumas of the past,” says Koirala. 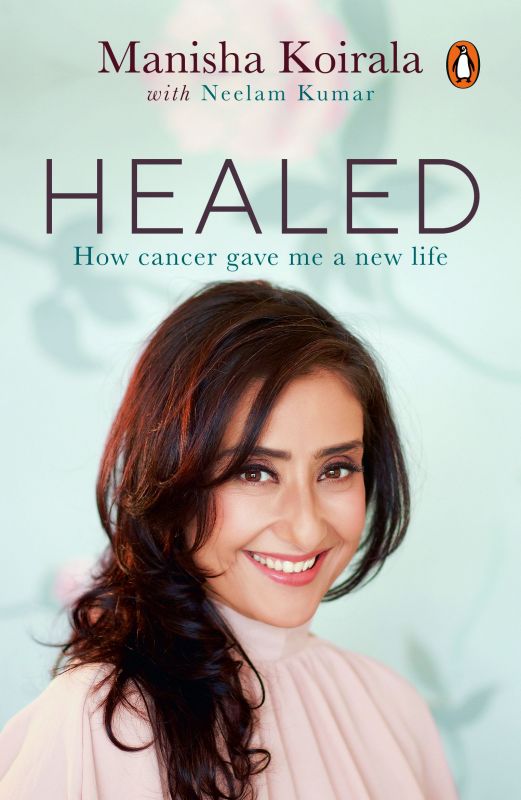 But why would one want to remember traumatic moments? She has a philosophical take to this. “Whenever we are faced with a grave situation, we are reminded of our mortality, we tend to forget that we are here for a limited time. We need to realise that we are alive one day and someday will come when we have to go and when this awareness dawns upon us, we don’t take life for granted,” she explains.

Manisha recounts the time when she lost her young cousin, who she had met and bonded with in NYC while undergoing treatment for cancer, “For a long time, there was a survivor’s guilt factor that I lived with. I kept asking myself why did I survive and why did she pass away even though she was much younger to me? I kept on praying for her soul to get mukti, and slowly started looking for the reason why I was alive and how I can make my life more meaningful. When the illness happened to me, it had shaken me up and I understood that my life could end anytime and if it can go any minute, what was I doing all these years?. How was I living and was I happy with the way I lived?”

And it was this soul searching that led her on a spiritual quest, “I always had spiritual lineage. My nani’s sister was a well-known sadhvi. My maternal side is spiritually strong. My father’s side of the family was more rationale and well-read. I grew up amidst these dual cultures. There was a spiritual side to me but I never valued it. I was an atheist then I became agnostic. One day, I decided to read the scriptures. I slowly got into it but my heart was not into it. I was still leading my toxic life. But soon I realised that everything around has to change and become a  way of life, and not only when I am reading a book or going to a place where I sit and meditate. I have to integrate that into my daily life,” says the former A list star with more than 80 films to her credit.

The popular notion is that movie stars are wealthy so the revelation in the book, where she talks about seeking help from Sahara Sri Subrato Roy for financial help, comes as a surprise. The book works because unlike most biographies today that are packed with half truths, Manisha has been admirably honest about her life. It takes courage to share intimate details of relationships gone wrong, drinking binges, excessive weight gain or doing inconsequential roles. Isn’t she worried about being judged harshly by being unflinchingly honest?

“Let me give you a background to this. Several years ago, when I was working on one of my earlier films, a senior actress, who was number 1 at that time, would mix Coca Cola with Vodka and drink it quietly when she was at a public gathering. So one of the filmmakers told me, ‘you can also enjoy your drink like this.’ Those days, I refrained from drinking at parties. My mother, who was visiting me in Mumbai at that time, told me clearly, ‘Manisha   if you want to drink or smoke, please be upfront, do not mix a drink with coke, and if somebody asks, say you are drinking Vodka. There is more shame in hiding it than drinking openly.’ That was the thought process, which gave me the courage to be what I was,” she reveals.

Manisha though admits that she took her openness to another level, one that she is clearly not proud of. “I cannot undo it. I have it ingrained in me to accept my flaws, that I have lots of them and I am a work in progress. Even after cancer I will never say I am Ms Perfect. I am human. For me, it is important to accept my flaws. It is my book that will last longer than me and hopefully be read by several generations. I prefer to be open, honest and earnest. I am fine with being judged. But by being honest about my life, I am giving closure to these incidents. I didn’t want my readers to feel cheated,” she shares.

Talking about the financial challenges she faced, Manisha points out, “When I entered movies, we weren’t paid the way stars are paid today. I have done many movies free of cost as money has never been my priority. Even when my films were successful, I was only paid `3 or `4 lakh. Of course, I have invested my money well. During my illness, I broke my bonds and ensured I  got the best treatment available in New York. I still have enough money to sustain my lifestyle and live with dignity. I don’t need to maintain a flamboyant lifestyle,” admits the star who was deeply touched by the Bollywood celeb turnout for her recent book launch.

Tell her that the film industry perhaps does not quite support its own people and she responds with objectivity. “My observation is when you are riding high, there will be many admirers, their dreams and aspiration attached to you as you are in demand. But there is another lot that sustains a friendship no matter. I have been an outsider and didn’t belong to any groups in the industry. Everyone would party and make films together, I didn’t cultivate all that. I was travelling and there were no industry friends, in my zone. It is very unfair for me to say nobody from industry came to me when I have not been in touch with them. I didn’t celebrate and mourn with them. I wasn’t there myself. I am grateful that for my book launch so many well wishers still came, I feel loved,” says Manisha.

There is this beautiful description of her landing in Nepal after her treatment ended. And you can understand why it is so special to her. “Everything became precious to me and I would look at life as if it will not be there for me tomorrow. That became a habit for me. I try and be 100 per cent in the moment.  I feel grateful in a strange way. I had everything but I wasn’t grateful before,” she says. And we leave her to revel in these precious moments. Finally, that is all we have left in life. Memories!