Acclaimed Bengali writer Sangeeta Bandyopadhyay has published nine novels and over 50 short stories since her controversial debut Shankini. Now, with her latest novel, the hallucinatory and sensual The Yogini, whether or not you believe in fate, Sangeeta makes sure you squirm in your seat.

Translated by Arunava Sinha, The Yogini’s central character is Destiny who appears in the form of a yogi, an Indian hermit. The story revolves around a young modern woman, Homi, who struggles to free herself from the uncanny shadow of Destiny. Homi finds Destiny, who approaches her on the street, both frightening and inexplicably arousing. He follows her every moment, trying to convince her that he is her real and eternal lover. Homi, however, is not ready to submit. 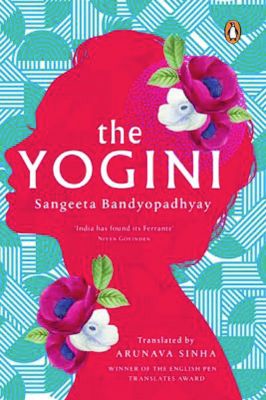 In Hindi, ‘Homi’ is related to ‘Homm’, a word that means yagya or yagna, the ritual practiced by Hindu munis and rishis around a fire (or agni) when praying for a cause. Homi is what emerges from the prayers at a homm. It is interesting to note, however, that this interpretation may not have much to do with the novel apart from just having a thin connection with the subject of the novel.

Even as the unconventional but rather interesting names of her characters play on our minds, Sangeeta explains, “Whenever I name my protagonists in my works, I have kept only one thing in mind: the readers should not have a prior real-life or literary reference of the name to which they otherwise would relate to when learning about the character. I always try to keep the name as fresh and unaccustomed as possible.”

The Yogini is a uniquely Indian tale with a worldly philosophy, in which the protagonist challenges the rules set out by fate itself. Incidentally, the novel deals with some cult facts of Hinduism and has some references of Hinduism although seemingly only because the backdrop of the novel is India and the characters are from Kolkata and Varanasi.

Homi is a modern woman with not much understanding of her religious identity. Therefore, when she struggles with Destiny, she has a very modern perspective of fate and destiny in her own context of living her day-to-day life.

“Ancient Indian philosophy possessed an idea that everything that is a part of this vast universe has its own destiny and that it is very difficult to comprehend or understand what exactly each of our destiny is. That is because each of our destinies is also bound with every other destiny of every other existence and non-existence in the universe,” shares Sangeeta.

So as we understand the basis of her book's concept, our life is a part of many fates, caught between chain reactions of innumerable destinies all of which are dominated by a mystical power that refer to as nature. Sangeeta agrees. “The ancient Greek mythology, art and literature, especially the famous Greek tragedies, often had references of fates and destinies being the most powerful game-changer in a human being’s life. Greeks too believed that we are ruled by our destiny,” she adds.

Several things directly or indirectly influenced Sangeeta into exploring a subject of fate, including a stories she heard as a child from her grandmother, and we wonder if even growing up in Kolkata shaped her as a writer.

“Besides the childhood stories I heard from my grandmother, as I grew older and my struggles got mightier I found that there would be situations in our life, in which we have no control of what’s happening! Eventually, we understand that the consequences of each incident are all connected to each other.  And we do try to make a difference but it is actually not in our hand! For me, this philosophy was a constant reminder. Thus I became more like an onlooker, an outsider to my own life,” sums up the author.