A lasting affair with art

An artist par excellence, Surya Prakash has been hailed as one of the leading contemporary painters of the Indian art circuit. Known for his abstract expressionism, and drawing inspiration from artists like Vasudev Gaintonde, Akbar Padamsee and Ramkumar, the painter has consciously portrayed his dissent against figuration — a common practice in the Indian schools of art.

Surya Prakash’s inclination towards abstraction was not isolated and his paintings have always depicted a beautiful medley of abstract forms with seeming reality, giving birth to the genre of abstract reality. The artist’s entire body of work over six decades has been compiled into a book titled Abstract Reality. 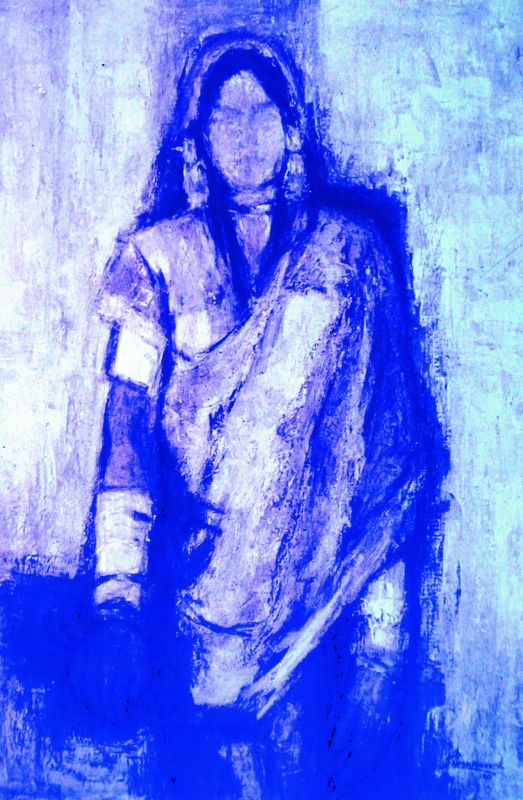 The painting, from his collection of earliest works, is title Banjara Women. A classic tempera on paper, it is dated 1960.

From humble beginnings in Madhira (in current day Telangana), his place of birth, Surya began his journey in art from Hyderabad’s College of Fine Arts in 1956. Art for him though, was an accidental miracle. The now acclaimed painter turned to landscapes for solace when his modest grades in his intermediate examination could not secure him a position in any of Hyderabad’s well known colleges. When an uncle dragged him to Baroda to have him admitted into the art course, Surya Prakash was not the most excited. Art was about personal pleasure and remains that to date. But it was Professor Divya Bhushan who pushed his limits to work through the otherwise bland theory classes, to discover his love for landscapes. 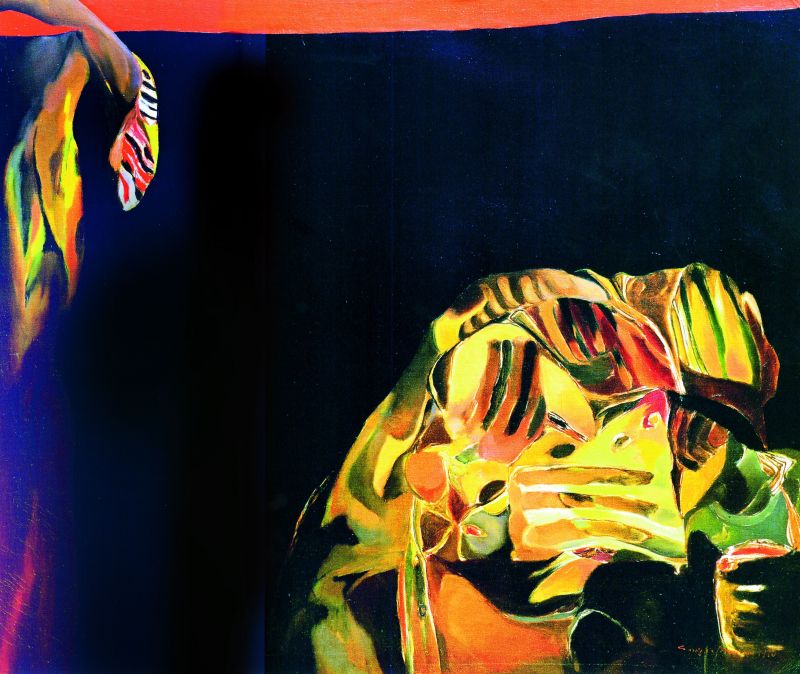 As seen in his works of art, the painter managed to redefine the meaning of conventional landscape. Be it his earliest sketches of the dingy lanes of Hyderabad’s old city, to his recent gardens of cherry blossom. The 1960s were marked with bold strokes, muted colour palettes and surreal representations of daily objects and scenery. However progressing towards the 1980s, one can spot the obvious change in strokes, colour palettes, elements and composition. 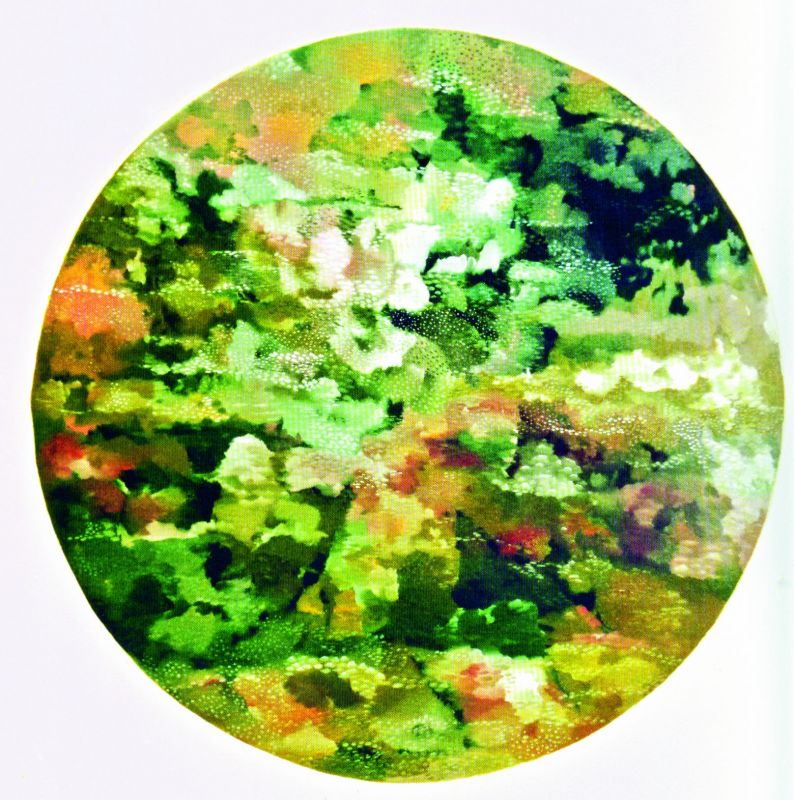 With more defined and conscious stroke work, the painter enters the world of nature — an element that continues to be his muse till date. 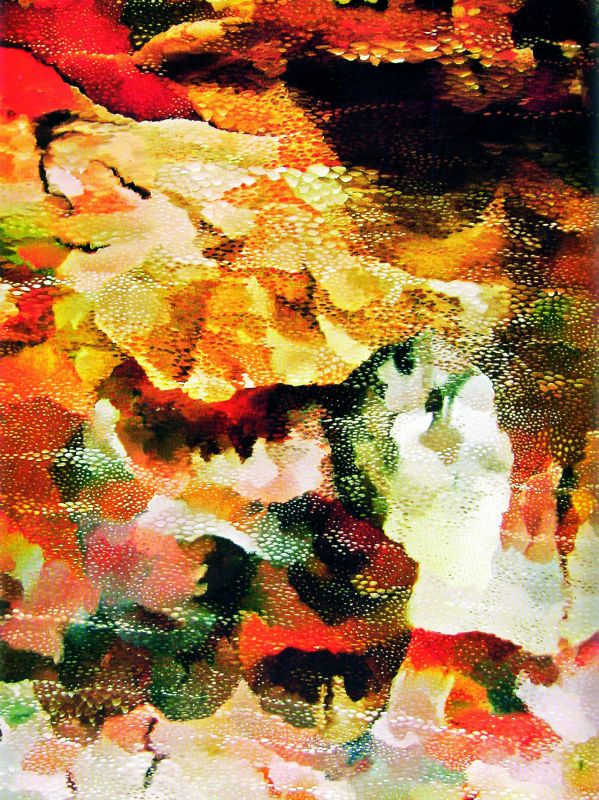 His series Reflection and Flight are a striking testimony of his love for nature and the inspiration he draws from it. As mentioned in Abstract Eye, he is “An avowed votary of French Impressionism — a la Seurat, Cezanne and Monet. Surya in his later works created magical slices of nature that sing paeans to its beauty. Indeed viewing his paintings is a sensory affair born of a melange of hues. In this sense, his work annotates the traditional British notion of sensory objectivity: the assertion that beautiful paintings and our responses to them, are essentially sensory (sic).” 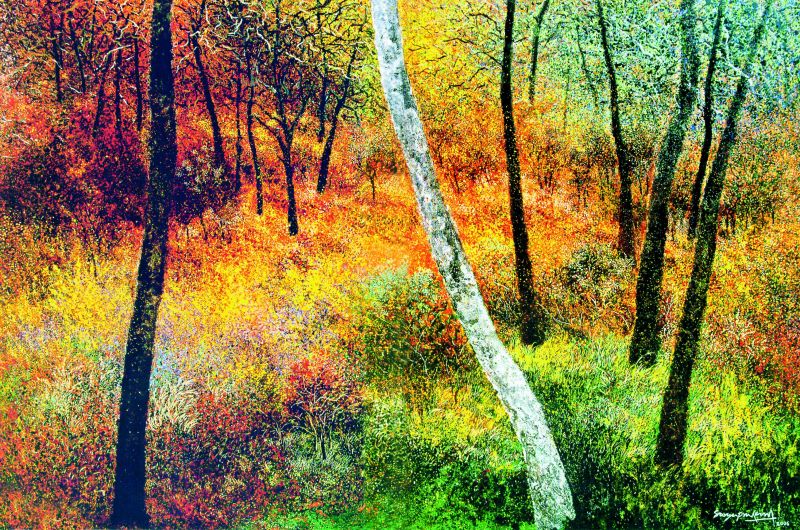 With the black, oil on canvas, 1970; a 2006 Diptych Acrylic on canvas, this piece remains untitled.

When asked about his recurring elements — the lotus and it’s leaves — Surya Prakash explains, “I actually went ahead and dug out a small pond in the premises of my house and grew lotus in it, to understand the workings of the flora and fauna in the pond. If you notice, some of the paintings with the primary element being the lotus has been painted on a circular canvas with the leaves spilling out of the border. These depict how the lotus leaf spills over the boundary of the pond.” 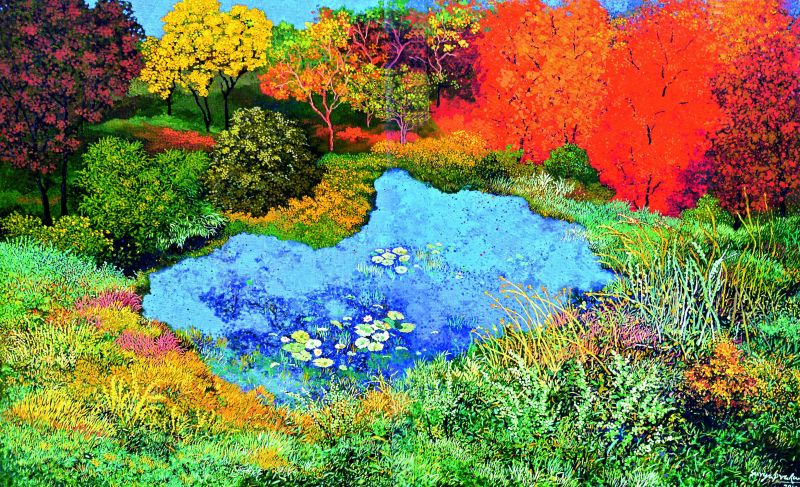 As the books explain his connection with nature, Ashrafi Bhagat in 2017 had written, “The Floral Aesthetic marked the continuation of reflection as well as Levitational Forms. The shift observed here was from the element of air to that of water (sic).” 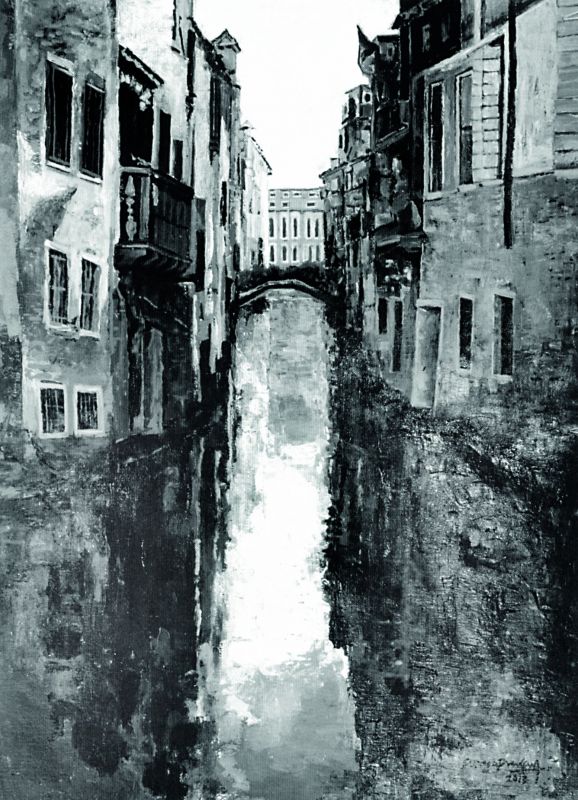 His series of paintings from Venice included one of the very few black-and-white paintings. The reflection of light on the city’s waterways and canals inspired the entire series.

A staunch follower of ‘seeing is believing’, Surya Prakash spent two entire years in the US around 2012 just studying the fall colours. “I wanted to understand how autumn looks, for my landscapes. I needed to see the vibrant orange and browns and reds to be able to replicate them on my canvas.” 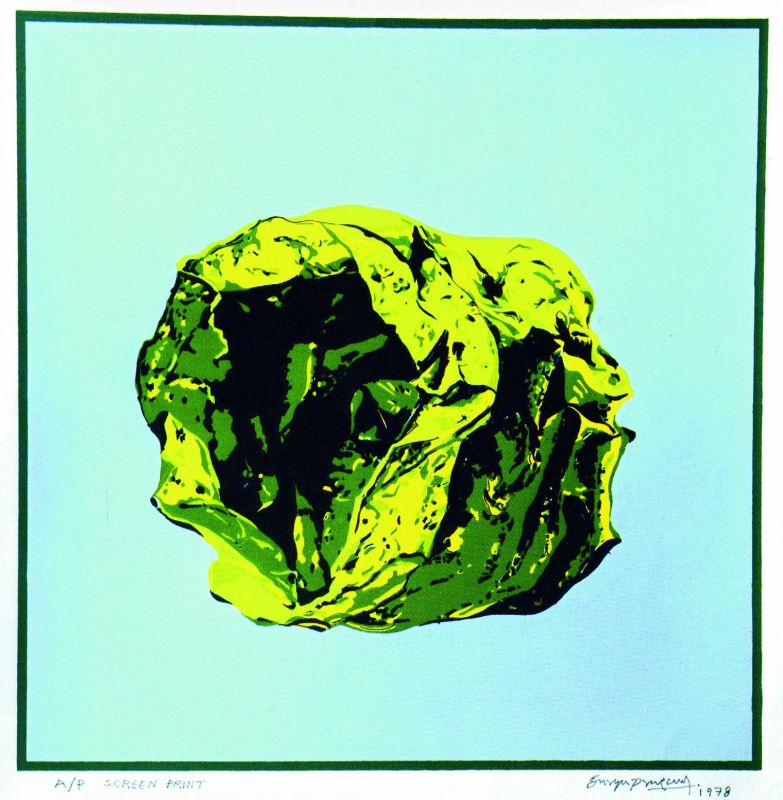 As the book explains his landscapes, “F.N. Souza’s landscapes reflect his pre occupation with an inherent conflict within the subjective realm of man. Ramkumar’s abstract landscapes stress on introspection. Akbar Padamsee’s ‘metascape’ internalised nature as his a supra realm, one that connotes the colours of the mind. Paramjit Singh’s landscapes evoke a pastoral feel. Within this venerable tradition Surya Prakash has been able to maintain a distinctive tenor (sic).” 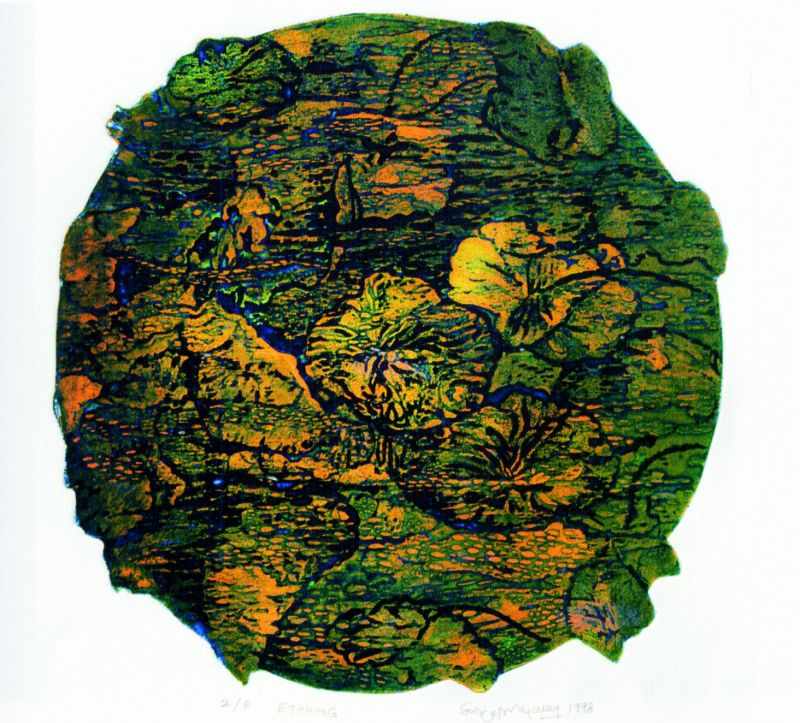 However, apart from his landscapes, the painter has been critically acclaimed for his series on automobile debris that depict a distinct, almost skeletal, human form. In 1971, Santo Dutta had explained, “...few years ago when I saw his paintings for the first time, I wondered at his imaginative handling of the theme of a car crash. It was his handling of the theme that made a common experience a symbol of the wreckage of human lives and values. His recent works, though still a series of variation and development of the same wreckage theme, have new nuances with a slow shifting of technique. A linear imbroglio of mildly contrasting colours now supplements his highly individualistic, subtle tonal treatment of the symbol. Along with a sense of waste and painful disfiguration, the linear pattern makes us aware of the confusion the insoluble riddles of our modern existence (sic).” 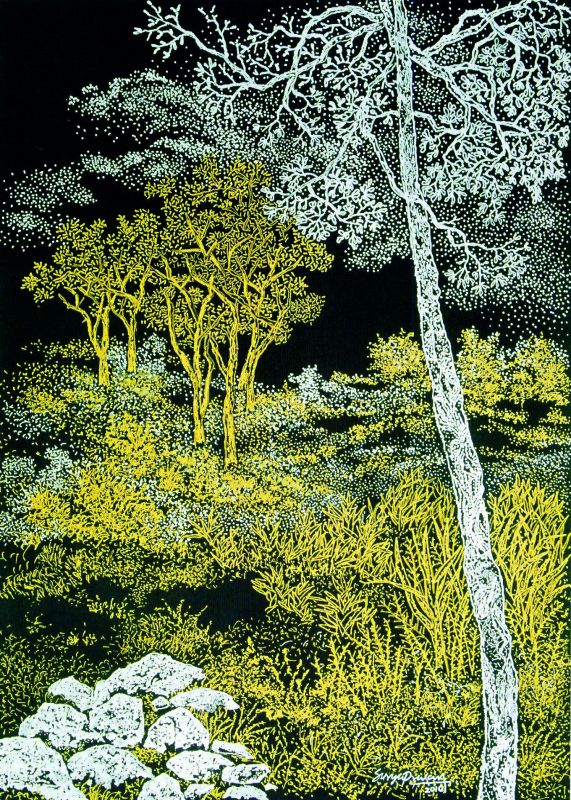 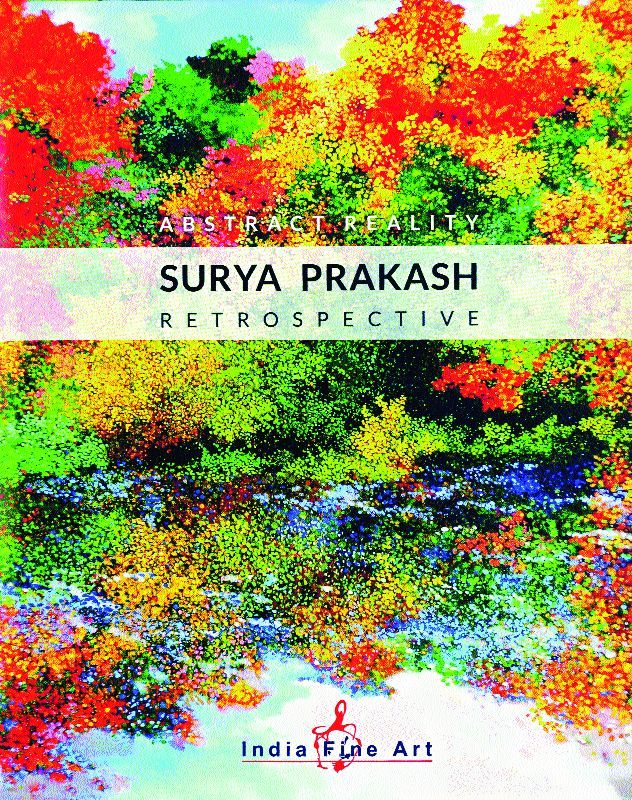