Around ten years ago, Namita Gokhale was working on the Puffin Mahabharata, which she retold for young and first time writers. Among the numerous characters, Ghatotkacha, the noble first born son of Bhima, the oldest of the next generation of Pandavas and his mother the rakshasi Hidimbi, Kunti’s eldest daughter-in-law, had struck a chord in her. And she knew she had to retell the tale of their loyalty to the clan. It is when the story wouldn’t go away that Hemali Sodhi, publisher at Puffin Books, persuaded her to write it. And she wrote Lost in Time: Ghatotkacha and the Game of Illusions. “The Mahabharata is a long and winding saga, with stories within stories and an enormous cast of characters. The dramatis personae of this great epic continued to hover in the periphery of my imagination long after I had finished writing my version (of Puffin Mahabharata). I fashioned short stories around Kunti, Gandhari and Nala Damayanti which were published in The Habit of Love,” Namita writes in an email interview.

Hidimbi and Ghatotkacha stuck to her, even though they were little acknowledged in the scheme of things. “Those were hierarchical and feudal times and they were outsiders in every sense.” In her book, a young boy travels back in time to those faraway days, and encounters the two, ‘the gentle giant and his strong, magnificent mother’, in Namita’s words. “Many of my books are set in the Lake District of Kumaon and the area around the Sat Tal lakes has featured in my last novel, Things to Leave Behind. This is also the geography associated with Hidimbi and Ghatotkacha and in my reveries I saw the story unfold. We respect demons and the dark powers in our hills, for they are associated with Lord Shiva’s ganas and ghouls.” 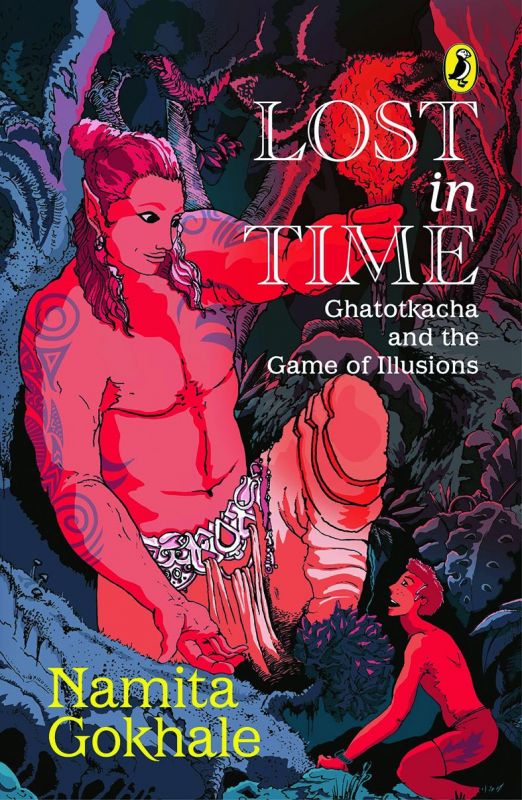 Lost in Time: Ghatotkacha and the Game of Illusions by Namita Gokhale Rs 250, pp 208 Puffin books

The author, who has earlier written several acclaimed novels such as Paro: Dreams of Passion, Gods Graves and Grandmother, says writing a children’s book is not a switch she suddenly made, but an abiding interest. “I’ve been speaking to young readers in schools quite regularly and got a sense of their deep curiosity about mythology and how knowledgeable they are about it. It’s a challenge to write for young readers and I enjoy it intensely.” She also didn’t try to change her style particularly because she was writing for a younger audience. She wrote for the child in her. “Today, young readers are extremely sophisticated  and have more knowledge and information available to them than previous generations ever did. Sometimes writers, subconsciously, talk down while addressing them and assume a paternal, or avuncular, or grandmotherly tone, as the case may be,” she says. She also worked with Ujan Dutta to add a strong visual appeal to the book.

“I try to write for the child within me, keeping vocabulary appropriate to the subject and keeping some joy and fun and whimsy in the telling. And I don’t shy away from the other aspects of life, from the battles and tragedies that are such an intrinsic part of the Mahabharata.”  At the time she was writing the book, Namita was also working on another novel, the last of her Himalayan trilogy, Things to Leave Behind. Both share the same geography, around the Lake District of Nainital. “So, wherever in the world I was, a bit of my writing mind was in that landscape and terrain, and in my imagination I was sleepwalking through it, absorbing the smells and sights and sounds, in different time frames. It was lovely but a bit disorienting. I wrote some parts of it in Corbett National Park. The silence, the night sounds, the proximity to nature yielded the chapter on the Secrets of the Forest. In retrospect, it is my favourite part of the book,” she writes and quotes from her book: ‘A mote of dust, dangling on a sunbeam....that’s what our earth is, young un’ he continued. ‘Do you understand?’